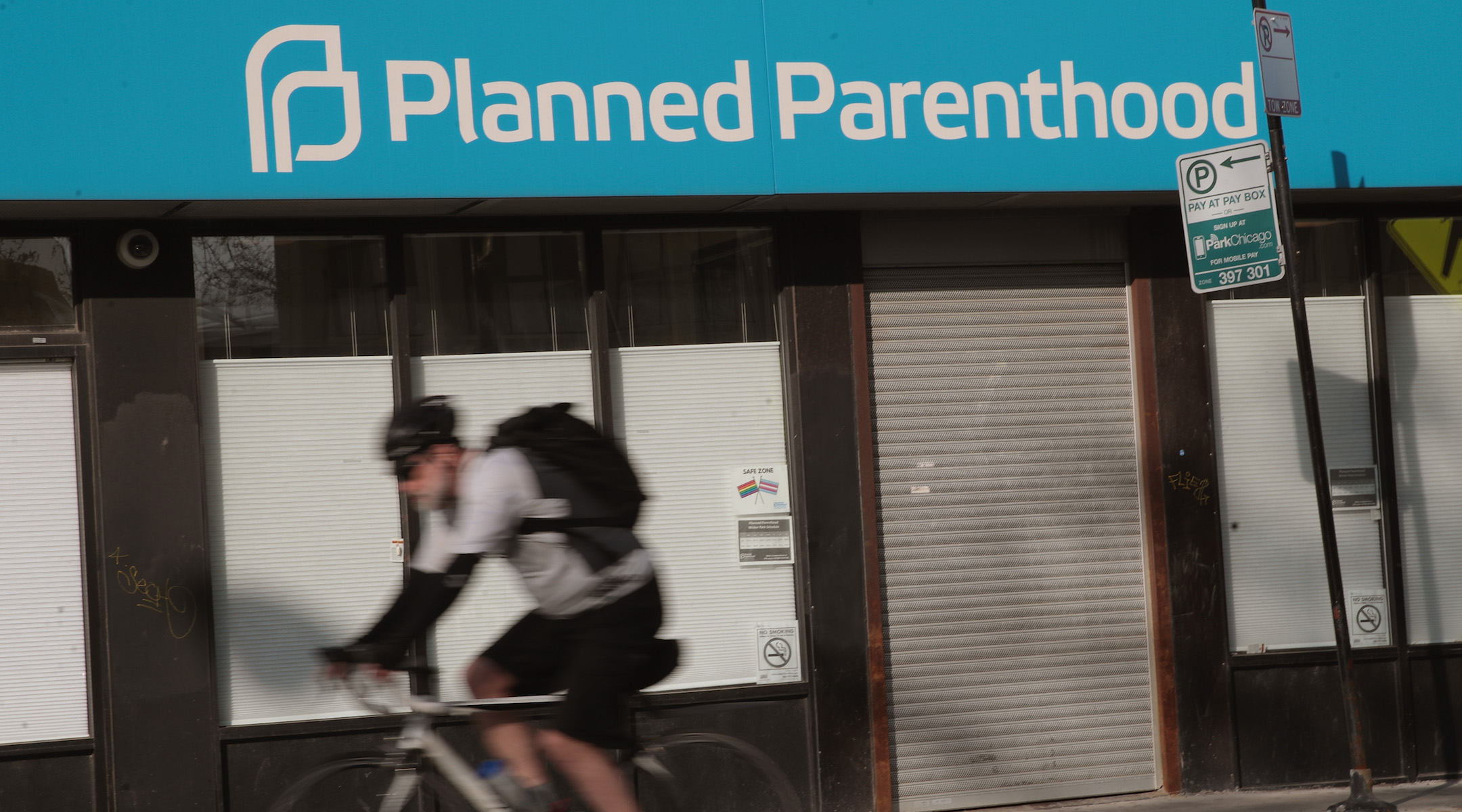 And they were joined by two large Orthodox Jewish religious organizations: the Rabbinical Council of America and Agudath Israel of America. The RCA is the umbrella group for centrist Orthodox rabbis. Agudah represents haredi Orthodox Jews.

“Jewish law opposes abortion, except in cases of danger to the mother,” read the RCA statement issued Tuesday. “Most authorities consider feticide an act of murder; others deem it an act akin to the murder of potential life.

“The RCA maintains that ‘abortion on demand,’ even before twenty-four weeks from the commencement of pregnancy, is forbidden,” the statement continued. “There is no sanction to permit the abortion of a healthy fetus when the mother’s life is not endangered.”

The Agudah in its statement Tuesday declared that “Jewish tradition teaches that a human fetus has status and dignity, and that abortion is prohibited in the vast majority of pregnancies.”

Both groups said their statements merely reflect age-old Jewish legal opinions on when and how it is permissible to terminate a pregnancy. They also said they are not nearly as absolute as Christian groups on the issue.

Abortion, however, isn’t usually at the top of the Orthodox Jewish establishment’s legislative agenda. What’s different now is that a distinctly liberal abortion law has been passed in a state with a large number of Orthodox Jews. And it comes at a time when the Orthodox Jewish world is moving to the right politically and voting along the same lines as conservative Christian communities.

“As you go to the right [religiously], you see people whose politics are more in line with those of the political right,” said Rabbi Mark Dratch, executive vice president of the RCA. “What our statement does is give a very centrist, traditional understanding of what the issues of abortion are that’s divorced from the politics of it.”

One other major Orthodox organization, the Orthodox Union, demurred from commenting on the issue.

“Because of the complexities involved with the halachic aspects of abortion, the OU has long refrained from lobbying on laws governing these issues,” the group told JTA in an email.

Agudah and RCA emphasized that they are not opposed to abortion in all cases, as Catholic and evangelical groups tend to be. Both said that Jewish law not only permits but in some cases requires abortion — for example, if the expectant mother’s life is threatened. And both said abortion could be permitted in other cases as well, like if it would prevent serious psychological harm to the expectant mother.

Under New York state’s new law, called the Reproductive Health Act, there are no barriers to abortion in the first 24 weeks of pregnancy. Abortion is allowed until the end of the pregnancy if the woman’s life or health is in danger, or if the fetus is not viable. And abortion is decriminalized and moved into the state’s health code.

This conflicts with traditional Jewish law, called halacha, Agudah and the RCA said. Some Jewish legal opinions consider abortion to be murder, while others say it is prohibited either as damage to the mother or as a waste of a potential life. The two Orthodox groups said abortion is prohibited for non-Jews as well because the Torah prohibits murder for everyone, not just Jews.

“Halacha permits, indeed requires, a Jewish woman to terminate her pregnancy if there is any reasonable concern for her life, even, some major decisors have explained, if the concern is psychological in nature,” Avi Shafran, Agudah’s director of media relations, wrote in an email to JTA.

“Otherwise, abortion is forbidden (though not necessarily considered murder, as some other faith systems feel). From a public policy perspective, the devaluation of even potential human life is a societally unhealthy one. It will perforce spill over to the devaluing of all human life.”

But Rachel Fryman, an Orthodox social worker on Long Island, supports the new law because it will  remove some hardship from what already is a difficult decision for Orthodox women. Before the law passed, Fryman said, women who received rabbinic guidance to have a late-term abortion would have had to travel out of state and find a new health provider. Now they can have the abortion in-state. 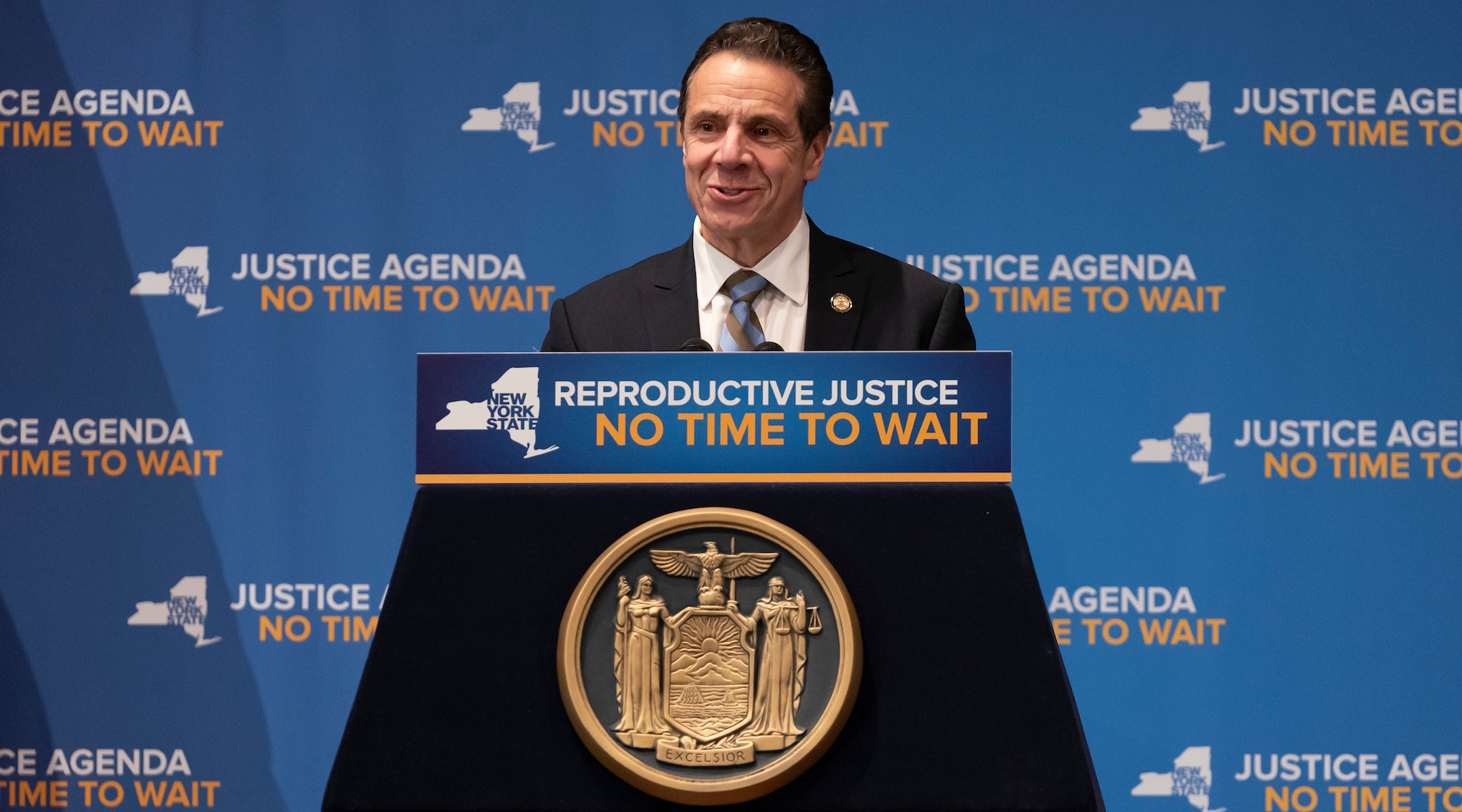 “As a clinical social worker, a frum woman who has experienced infertility and multiple pregnancy loss, who has asked [for rabbinic guidance], I do not understand why this statement was necessary,” Fryman said, using a Yiddish word connoting religious observance. “When a woman has consulted with a rabbi and been given the religious recommendation to have an abortion, this gives her the opportunity to do it locally, without the emotional and financial hardship of finding a provider and having to travel out of state.”

Both Shafran and Dratch said that all decisions about abortion should come after a conversation between a woman and her rabbi. For Rabba Sara Hurwitz, president of Yeshivat Maharat, an Orthodox seminary that ordains women clergy, that case-by-case sensitivity is why “no statement” is the best option for Orthodox organizations.

Hurwitz, who emphasized that she was speaking only for herself, pointed toward a 1990 statement from the RCA on abortion that she felt was more nuanced. The statement opposes abortion in most cases but “[t]akes note of the different values of the many religious communities in America that are often at variance with one another, in the nature of a politically pluralistic society.” It also “[p]roclaims that neither the position of ‘pro-life’ nor the position of ‘pro-choice’ is acceptable to Halacha.”

This week’s statement from the RCA, Hurwitz said, may make Orthodox women afraid of seeking out the necessary guidance when considering whether they should have an abortion.

“The process and the decisions that go into a woman needing an abortion are complex and need to be carefully considered between the rabbi, doctor and family in any woman’s life,” she said. “To have a concrete, black-and-white statement doesn’t allow for nuance, and I think it scares women from being able to seek out the care and help they may need, and to me that’s dangerous.”

This week’s RCA statement, said Rabbi Sarah Mulhern, seems to adopt the language of the Christian right. Mulhern, a faculty member at Shalom Hartman Institute, a Jewish think tank, noted the statement uses the phrase “abortion on demand” and speaks of abortion in terms of murder.

“I think the categories of personhood and murder are not really the native categories the Jewish discourse has used to evaluate the ethics of abortion,” she said, also speaking personally and not on behalf of her institution. The statement, Mulhern said, seems to “import the language of the normative American right. I don’t think it’s the most helpful and I wish they would have made different choices.”

But Dratch of the RCA said his organization’s statement differs from the strictly prohibitive language of the Christian right, and that women’s needs are a core part of any conversation about abortion.

“What’s important to us is to understand facts and what our tradition tells us,” he said. “On this issue our position differs significantly from the Catholic Church or others on the right who are opposed to abortion in all circles. We’re not deaf to the impact on women in terms of their emotional and physical health.”

Very little Jewish discussion of abortion is black and white. Just as Orthodox groups do not advocate a blanket prohibition on abortions, the liberal Reform Jewish movement does not condone abortion in all cases, says Reform Rabbi Audrey Korotkin.

While Reform Judaism says that Jewish tradition clearly prioritizes the life of the expectant mother over that of the fetus, Korotkin said the movement would discourage using abortion as a form of birth control. But as a matter of public policy, the Reform movement has repeatedly opposed any legislative limits on abortion access.

“It’s not just that the woman’s life is in danger,” said Korotkin, a member of the Reform Central Conference of American Rabbis’ Responsa Committee. “There could be a situation of extreme illness, extreme emotional health. We believe that women ought to have access to the full range of reproductive medical services.”