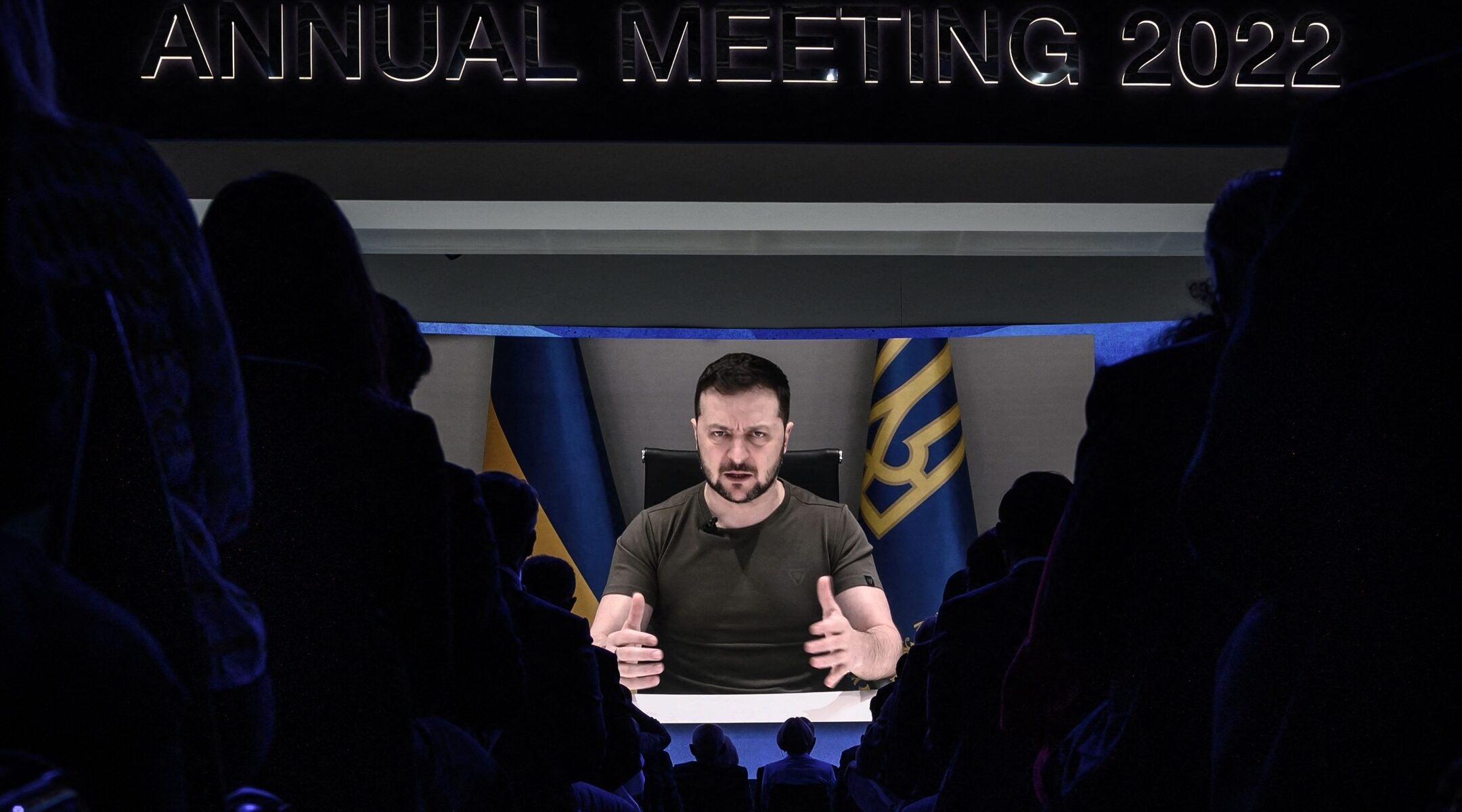 Ukraine President Volodymyr Zelensky appears on a giant screen during his address by video conference as part of the World Economic Forum (WEF) annual meeting in Davos, Switzerland, May 23, 2022. (Fabrice Coffrini/AFP via Getty Images)
Advertisement

(JTA) — Ukraine’s Jewish president Volodymyr Zelensky brought up the Holocaust to snap back at former Jewish U.S. Secretary of State Henry Kissinger, who argued this week at the World Economic Forum in Davos, Switzerland, that Ukraine should give up its hope to reclaim territory that Russia annexed in 2014 in the interest of stopping the current war as soon as possible.

Henry Kissinger said Monday that Ukraine should end the war by accepting the “status quo ante” — in other words, Russia’s effective 2014 annexation of territories in eastern Ukraine.

“In my view, movement towards negotiations and negotiations on peace need to begin in the next two months so that the outcome of the war should be outlined,” he said.

Zelensky slammed the suggestion in remarks translated into English by his office on Wednesday.

“No matter what the Russian state does, there is always someone who says: let’s take its interests into account. This year in Davos it was heard again,” Zelensky said. “Still in Davos, for example, Mr. Kissinger emerges from the deep past and says that a piece of Ukraine should be given to Russia. So that there is no alienation of Russia from Europe.”

Zelensky added: “It seems that Mr. Kissinger’s calendar is not 2022, but 1938, and he thought he was talking to an audience not in Davos, but in Munich of that time.”

The 1938 reference alludes to the agreement in Munich that year by western European powers to allow Adolf Hitler to claim Czechoslovakia, in the hopes of containing his ambitions. Hitler then invaded Poland the next year, launching World War II.

Zelensky then brought up Kissinger’s personal Holocaust past.

“By the way, in the real year 1938, when Mr. Kissinger’s family was fleeing Nazi Germany, he was 15 years old, and he understood everything perfectly,” Zelensky said. “And nobody heard from him then that it was necessary to adapt to the Nazis instead of fleeing them or fighting them.”

Kissinger, 98, fled Nazi Germany as a youth, and when he was of age enlisted in the U.S. Army and fought Nazis in Germany. He went on to serve as the first Jewish secretary of state, from 1973 to 1977.