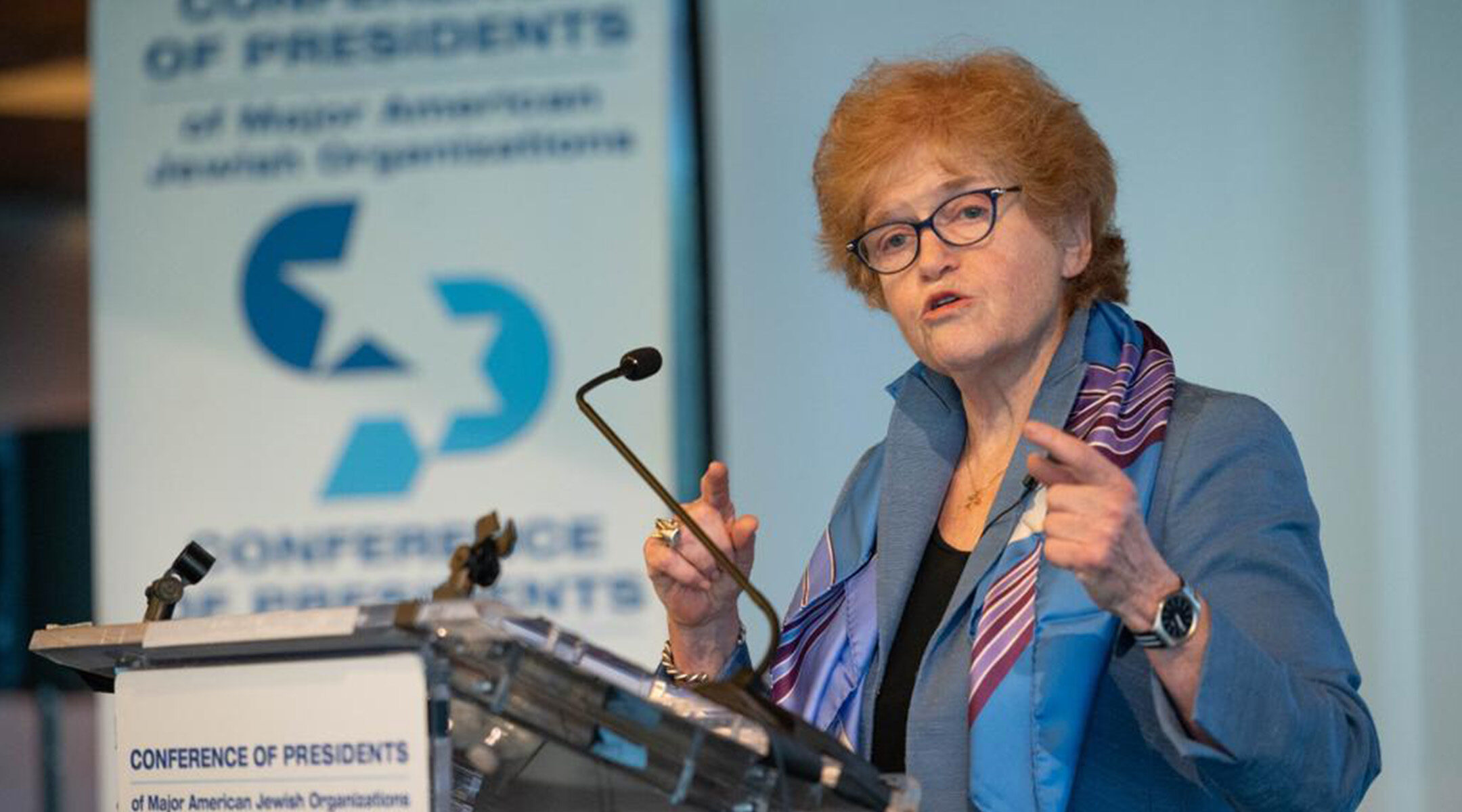 Deborah Lipstadt speaks at a conference arranged by the Conference of Presidents of Major American Jewish Organizations at the Museum of Jewish Heritage in New York, May 26, 2022. (Shahar Azran)
Advertisement

“Many people were shown the horrific impact of the Great Replacement Theory in the Buffalo shooting,” she said, referencing a racist and antisemitic conspiracy theory the Buffalo shooter had shared in an online manifesto. She said the shooter’s “first objective was to kill Blacks, but the Jews would be dealt with in time.”

Lipstadt delivered the speech at a one-day conference arranged by the Conference of Presidents of Major American Jewish Organizations, the foreign policy umbrella for Jewish groups, held Thursday at the Museum of Jewish Heritage in Battery Park. Its purpose was to address the rise in antisemitism across the United States.

In New York, antisemitic incidents increased by 24 percent last year to the highest level in decades, according to an annual report released by the Anti-Defamation League. The report counted 416 antisemitic incidents across the state, including 51 assaults, the most physical attacks since it began compiling data in 1979.

There was also a rise across the nation, with 2,717 antisemitic incidents across the United States, including 88 assaults, an increase of 167 percent from the year before.

During her 30-minute speech, which was followed by a panel discussion, Lipstadt described antisemitism as “ubiquitous, free-flowing and moving in and coming from all directions.”

“We must never delude ourselves that antisemitism comes from only one political, social, ethnic or religious direction,” she said.

Prior to her public remarks, Lipstadt, a Holocaust historian who also was appointed to United States Holocaust Memorial Council by former President Bill Clinton, spent a few minutes talking one-on-one with this reporter. “I grew up in New York,” she told the New York Jewish Week. “My family came to New York, I’m a New Yorker. You can take the girl out of New York, but you can’t take New York out of the girl.”

Lipstadt, 75, grew up in Far Rockaway, Queens, and went on to become an influential figure in Holocaust education around the world. In 1996, she was sued by British author and Holocaust denier David Irving for writing about him in her book “Denying The Holocaust.” Lipstadt won the case.

When Lipstadt was first nominated as an ambassador in July 2021, her appointment was delayed because she criticized Republican Senator Ron Johnson, whom Lipstadt said was advocating for white supremacy.

Lipstadt was officially sworn in to the special envoy role two days ago by Vice President Kamala Harris, entering the office “as a child of two immigrants who implanted within their children an abiding faith in their religious identity and an equally abiding faith in the United States of America,” as she said today.

During her remarks, which were given before an in-person crowd of approximately 50, the ambassador discussed the ways that antisemitism is linked to other hate speech, citing the May 14 Buffalo shooting in which 10 Black people were murdered.

Here she discusses the Buffalo shooting and how racism and antisemitism are linked together. pic.twitter.com/eh5jApa9Ke

She cited multiple other examples that connected racism and antisemitism, including Charlottesville in 2017, when white nationalists chanted, “Jews will not replace us,” as well as the 2018 Tree of Life shooting in Pittsburgh, where 11 people were murdered while at synagogue.

She added that there is a “nexus between domestic and international antisemitism” noting that the Buffalo shooter plagiarized his rants from the Christchuch killer in New Zealand, who murdered 51 Muslims in 2019.

“These killers, even if they have never communicated directly with one another, are part of an interlocking nexus of haters,” Lipstadt said. “They inspire one another and their followers.”

She also said that “we cannot ignore the connection between antisemitism and the attacks on Israel,” but noted that “criticism of the policies of the Israeli government is not antisemitism per se.”

She added: “Reflexively labeling any criticism of Israel as antisemitism is not only wrong, but can be counterproductive in the fight against antisemitism.”

Still, Lipstadt pointed out that some of the criticism of is Israel is a foil for antisemitism. “Particularly of its legitimacy to exist,” she said. “When a Jewish state is denied the same treatment that is accorded to every other state, one is compelled to ask, ‘What is the basis for this imbalance?’ The answer should be self-evident.”

She also said that the Biden-Harris Administration “enthusiastically embraces” the International Holocaust Remembrance Alliance (IHRA), a working definition of antisemitism that remains controversial in some circles for its depiction of some anti-Israel speech. “It helps identify and underscore the unique challenges experienced by Jewish communities worldwide,” she said.

Separately, Lipstadt told the New York Jewish Week that there is “a clear understanding” by the president and vice president that “antisemitism is a threat to democracy,” adding: “This is not just something that must be fought to keep Jews safe, which alone would be enough, but this has even broader implications.”

Ambassador Deborah Lipstadt @StateSEAS says that labeling criticism of the Israeli government as antisemitism is 'counter-productive.'

She added, 'Some of the criticism of Israel, particularly of its legitimacy to exist, is not but a foil for antisemitism.' @Conf_of_Pres pic.twitter.com/2TbBRwcubR

The remainder of the conference was closed to the media and the public. Others scheduled to speak during closed-door sessions include Adam Lehman, the CEO of Hillel International; Nathan Diament, the executive director of the Orthodox Union Advocacy Center and Patrick Daly, the deputy director of Secure Community Network.

Lipstadt, meanwhile, was the keynote speaker at Yeshiva University’s commencement, which began at 1 p.m. Thursday afternoon at the Arthur Ashe Stadium at the USTA Billie Jean King National Tennis Center in Flushing, Queens.

In a separate conversation with the New York Jewish Week, when asked about recent events in New York, Lipstadt said that attacking Jews on a college campus for being Zionists is “crazy.”  “I don’t like the way China is handling the Uyghurs,” she said. “But if I attack a Chinese person at Brooklyn College, what’s that? That’s racism.”

Lipstadt added that her main point for her speech was “recognizing the interconnectedness” of antisemitism and racism. “We can’t look at antisemitism as a standalone thing,” she said. “We have to recognize its linkage to racism. It’s not that one is more important than the other, but that it’s a nexus and you certainly see that in New York.”