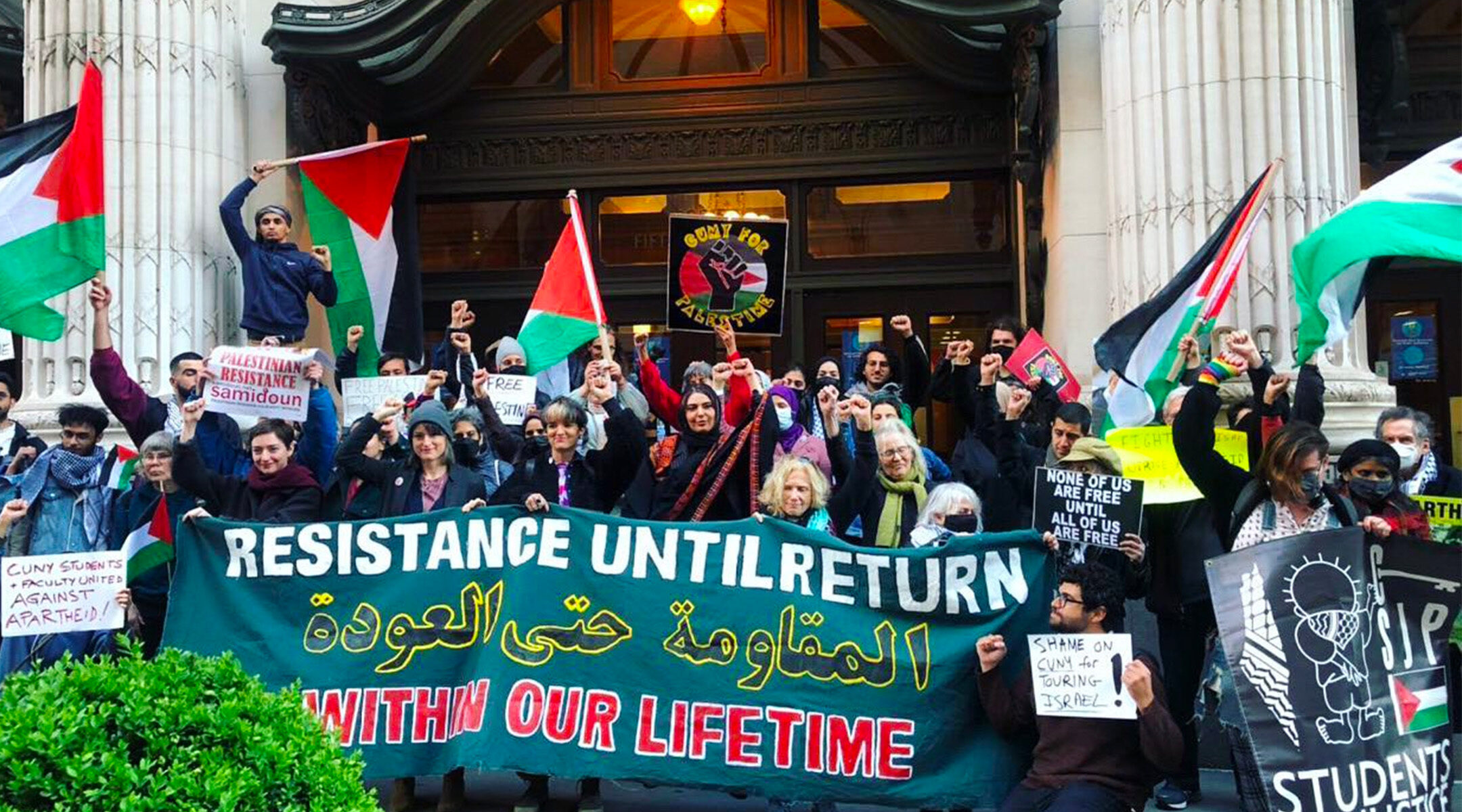 (New York Jewish Week) — A speaker with a history of anti-Israel statements gave a commencement speech at a CUNY School of Law graduation ceremony last weekend, prompting yet more accusations of antisemitism at the public university system.

Nerdeen Kiswani, the student who gave the speech, has amassed over 15,000 followers on Instagram. She created the pro-Palestinian advocacy group Within Our Lifetime, which has held rallies calling to “globalize the Intifada.”

During her speech, which focused on the Palestinian cause, Kiswani said that she is “facing a campaign of Zionist harassment by well-funded organizations with ties to the Israeli government and military on the basis of my Palestinian identity and organizing.” In a video of the speech, thunderous applause can be heard.

Ilya Bratman, executive director of Hillel at Baruch College, said that the student government at CUNY School of Law elected her as the speaker.

A Jewish student at CUNY, who asked not to be identified out of fear of retribution, said that Kiswani is creating an “unsafe environment” for Jewish people on campus.

“It’s one thing to have a political person who you don’t agree with,” Dave (a pseudonym) said. “But she calls for the actual murder of Jews. It’s really setting a precedent that CUNY is OK with having people in their school who are out to hurt us.”

Kiswani has a long record of statements that call for the abolishment of the state of Israel and actions that appear to condone violence against Israelis.

“I’m banned from my homeland for as long as this Zionist settler entity, this organization called Israel, masquerading as a country, continues to exist,” Kiswani said in a YouTube interview in May 2021. “We had peace before Israel was created, so abolishing Israel is the key to peace.”

Kiswani also liked a since-deleted Instagram post that said, in Arabic, “Glory to the axe of resistance.” The post referred to the May 5 murder of three Jewish fathers in the Israeli city of Elad by Palestinian attackers wielding axes. 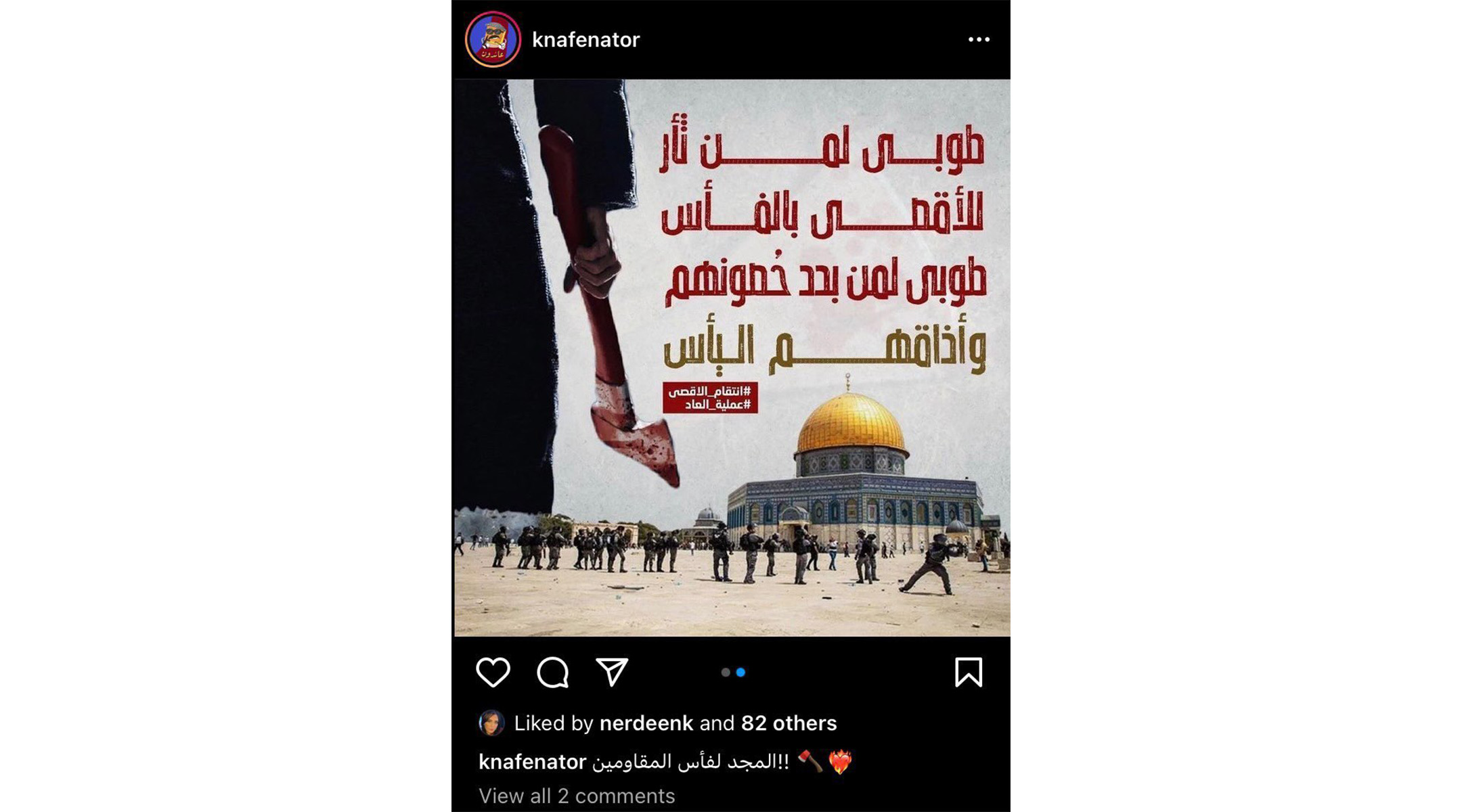 Kiswani has refused interview requests from the New York Jewish Week multiple times, calling the organization a member of the “Zionist media.”

A professor at CUNY who is also a member of the New York chapter of the pro-Palestinian group Jewish Voice for Peace said that Kiswani is “intelligent, honorable and courageous.”

“I think that attempts to tarnish her or her reputation are slander and ugly,” said the professor, who said they feared being fired from the school for speaking to the press.

CUNY has 25 colleges across the five boroughs, with a central administration. Students and faculty at Baruch College, John Jay College of Criminal Justice, Queens College and Hunter College, among others, have complained about anti-Israel resolutions passed by the campus-wide faculty union, as well as an anti-Israel climate on their individual campuses.

Dave described an incident earlier this month at CUNY’s John Jay campus on Manhattan’s West Side. On Israel’s Independence Day, he said, a classmate charged toward him and his group of friends while they were sitting on a grassy area wearing Israeli flags.

“It was like he was intentionally invading our space,” Dave said. “He was running, jumping over our heads, to intimidate us.”

He added that students are afraid to wear “anything that would show that they’re Jewish,” such as a kippah or a Star of David. “They’re afraid of the repercussions from people on campus,” he said. “People on campus might actually hurt them.”

Bratman of Hillel told the New York Jewish Week about another report this semester of a student being harassed for wearing a kippah at John Jay. “A Jewish student is walking through the hallways wearing their kippah,” Bratman said. “People say to him, ‘You are an oppressor.’ No one asked him his opinion on Israel. It’s complete and overt antisemitism.”

Bratman added that Kiswani’s words influence others to create an environment that makes Jewish students on campus “extremely uncomfortable.”

“She calls herself part of the oppressed, minority, marginalized group,” Bratman said. “No one then pays attention to her words, words that call for violence against Jewish people. It’s extreme and disturbing.” 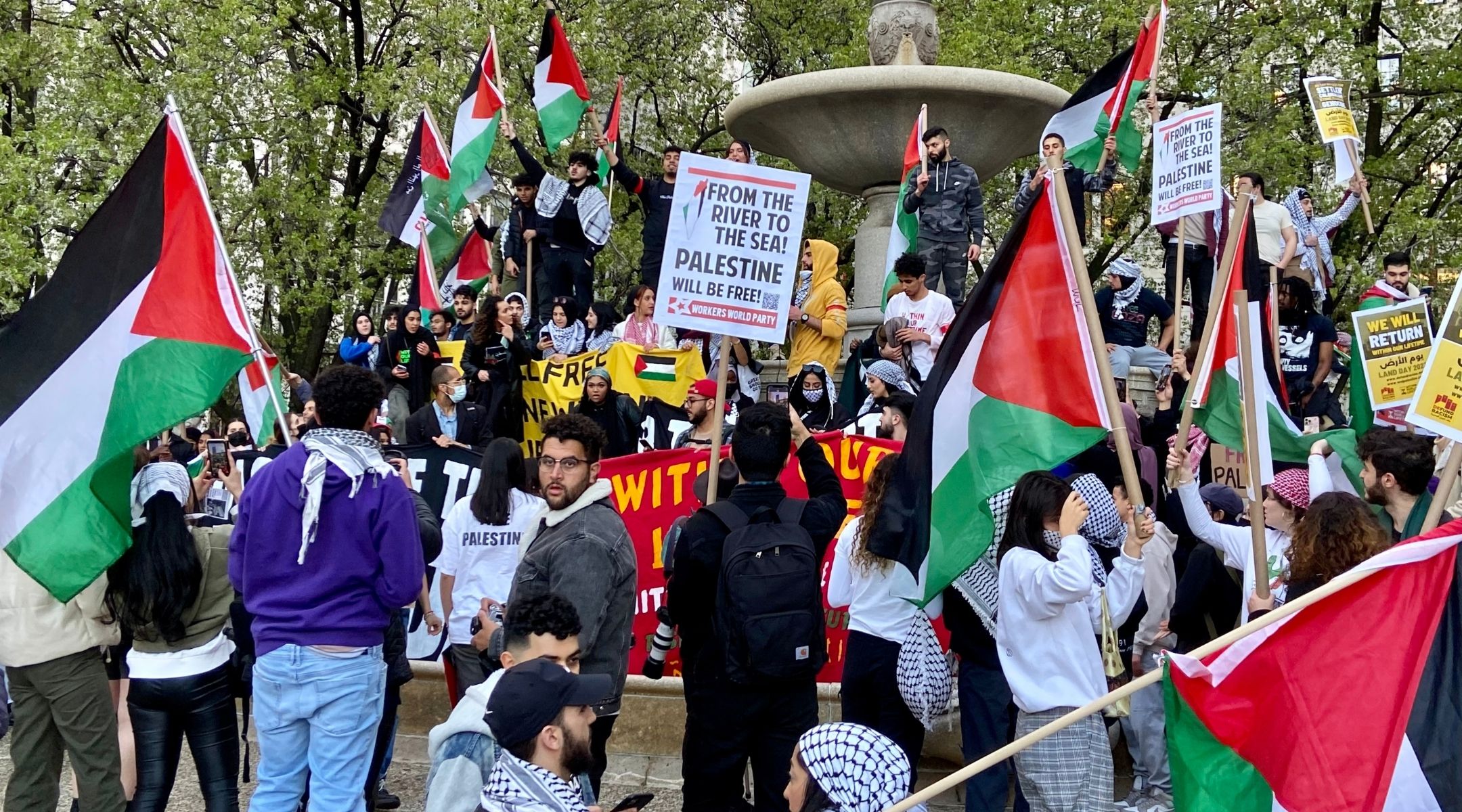 Hundreds of pro-Palestinian protestors gathered at the Israeli Consulate in Manhattan before proceeding to the fountain in front of the Plaza Hotel at 59th Street, April 20, 2022. (Jacob Henry)

“I actually think the fact that more Palestinians haven’t committed violence is amazing,” the professor added. “I’m not saying it’s a good thing to have violent acts, but I can be sympathetic with the people who commit them because they just reached the boiling point. And it’s nothing compared to what Israelis do every single day.”

The professor did acknowledge that there has been a rise in antisemitism and that it was “wrong” for a person to be accosted for wearing a kippah.

Many Jewish and pro-Israel groups argue that while criticism of Israel is fair game, calls for the country’s destruction and violence against its citizens, as well as the targeting of Jewish students simply because they are suspected of supporting Israel, is antisemitic.

Bratman said that the CUNY law school’s student government representatives have stated “openly and loudly that Jewish students shouldn’t come to college,” and that the tenor or the organization is “extraordinarily anti-Zionist.”

The resolution said that CUNY Law is “directly complicit in the ongoing apartheid genocide and war crimes perpetrated by the state of Israel against the Palestinian people.”

Jeff Lax, a professor at CUNY’S Kingsborough College, is one of the founders of a group called SAFE CUNY, which advocates for “Zionist Jews who are systemically discriminated against and excluded by” CUNY and the faculty union, which last year condemned Israel for “the continued subjection of Palestinians,” and called for its state chapters to consider supporting the academic boycott of Israel.

Lax is also joined a lawsuit against the union, the Professional Staff Congress, accusing it of antisemitism.

SAFE CUNY released a statement condemning CUNY’s “horrifying and Jew-hating decision to honor” Kiswani by allowing her to give a commencement speech.

“Honoring a Jew-hating bigot who has called for violence to Jews makes Jews at CUNY unsafe,” the statement said. “CUNY bears responsibility if someone gets hurt in the wake of Kiswani’s violence-inciting, antisemitic rhetoric.”

The group sent a letter to Chancellor Felix V. Matos Rodriguez in regards to Kiswani, saying that they are “deeply concerned.”

“CUNY has become an unsafe place for observant Jews, Zionist Jews and many other Jews,” the letter said. “Prompt action is long overdue and we demand a voice in that process.”

The fight over Israel and Palestinian causes at CUNY has been ongoing for years, with the administration rarely making comments about it.

However, when CUNY School of Law adopted a BDS Resolution in 2021, Matos Rodriguez released a statement saying that “CUNY cannot participate in or support BDS activities.”

“These organizations speak for themselves,” Matos Rodriguez said. “The opinions or positions they express are entirely theirs and do not represent the views of CUNY or the majority of the 300,000 members of our community.”

Matos Rodriguez did not respond to the New York Jewish Week’s request for comments. Multiple pro-Palestinian groups declined to comment for this article, including Within Our Lifetime, IfNotNow, Jewish Law Students Association, and CUNY 4 Palestine.