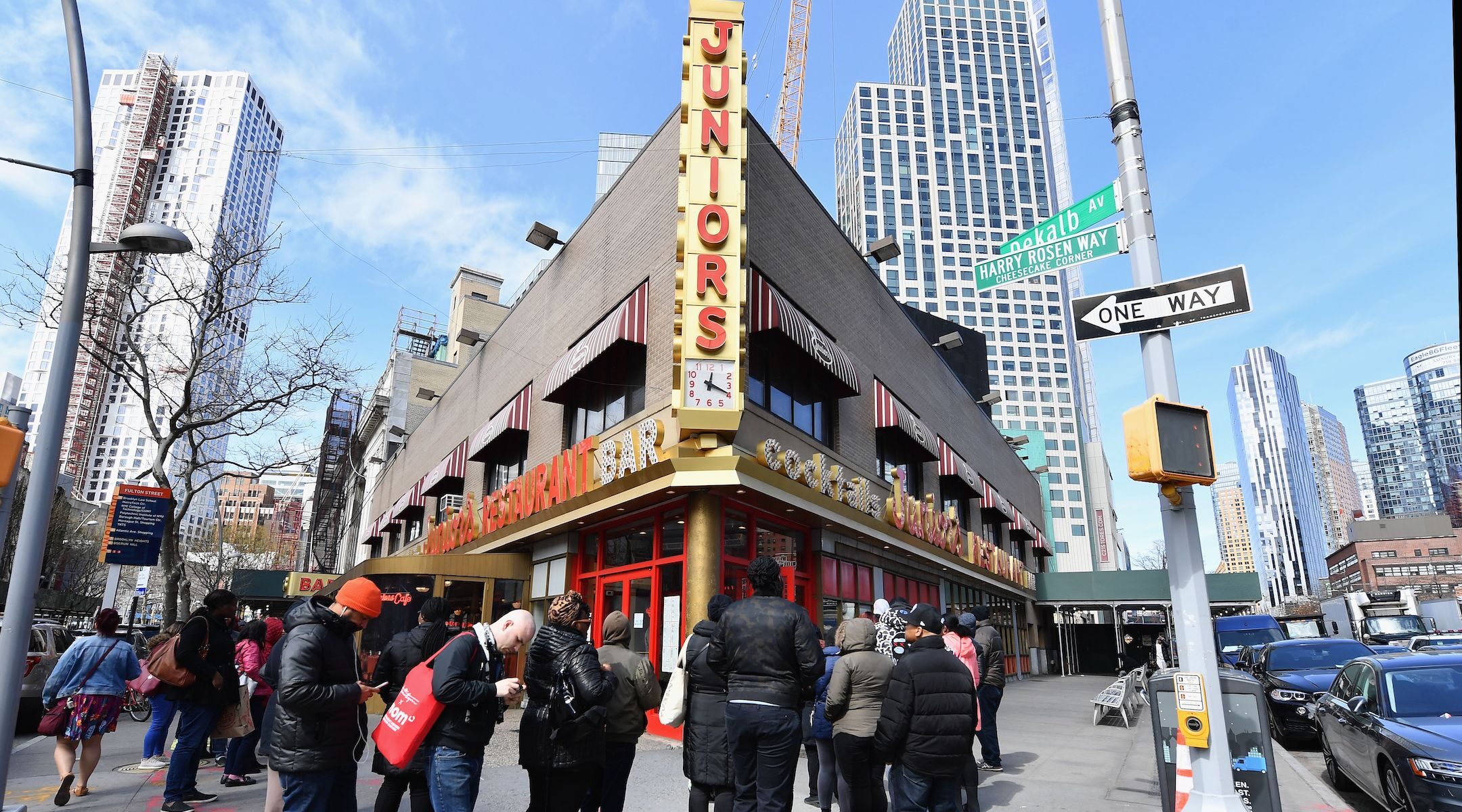 People stand in line outside Junior's restaurant to pick up food to go on March 16, 2020 in the Brooklyn Borough of New York City. (Photo by ANGELA WEISS/AFP via Getty Images)
Advertisement

(New York Jewish Week) — When Alan Rosen, the third-generation owner of Junior’s Restaurant, read the headlines back in April about a 12-year-old Brooklyn boy who was shot and killed while eating in the backseat of a car, the only thing he could think was, “enough already.”

“I had limited options on what I could do — I’m in the restaurant business,” Rosen, 53, told the New York Jewish Week. “But I took it upon myself to do something. It was a tipping point.”

So, in between his regular workday at the famous restaurant and cheesecake bakery — which includes overseeing Junior’s original Downtown Brooklyn location, as well as outposts in Midtown Manhattan and Foxwoods Casino — Rosen contacted the mayor’s office to see what he could do to help prevent gun violence. After several phone calls, he was connected with the NYPD, then New York Police Foundation and, eventually, Brooklyn District Attorney Eric Gonzalez.

Ultimately, Rosen and Gonzalez collaborated on organizing a gun buyback event through the New York City Police Foundation. (Initially, Rosen had wanted to host the event in its uber-retro Brooklyn location, “before being informed that’s not how gun buybacks are run,” according to Grub Street, which broke the story.)

In the end, the event was held last Saturday, May 21, at the Emmanuel Baptist Church in the Clinton Hill neighborhood in Brooklyn. Rosen donated $20,000 in funds for the rewards; they offered $200 and an iPad for working assault rifles and handguns, and $25 for airguns.

Speaking with the New York Jewish Week on Tuesday, May 24, Rosen said he considered the buyback a success. “There’s now 69 less guns on the street,” he said. He also said he was touched by the small differences he felt the event made in the community and in individual’s lives — a grandmother who was able to finally, and safely, get rid of her grandson’s gun; a young boy who turned in his toy gun because he realized it was harmful. (He was paid $20, Rosen said.)

Rosen added that, as a bastion of New York City — and Brooklyn, in particular — for more than seven decades, Junior’s feels obligated to give back and protect the community as much as possible. “It was worth all the money,” he said of the buyback event. “It may not be the most efficient way to solve gun violence issues, but it’s what I can do right now.”

In a devastating twist, at the time of the interview, the school shooting at Robb Elementary in Uvalde, Texas was unfolding into a national tragedy. Nineteen children and two teachers were gunned down in the attack.

“As a parent of three, I’m devastated that innocents were murdered yesterday,” Rosen said during a follow-up conversation on Wednesday. “This is not a political statement, by the way. It’s getting legal or illegal guns off the streets. Having said that, no 18-year-old should be able to buy an assault rifle. Anyone who can’t agree to that needs to rethink their beliefs.”

Rosen’s concerns come amid a wave of rising crime in the city: One Sunday morning, a day after the gun buyback event, a man was shot dead on the subway. “New York has seen enough,” Rosen said. The New York Times reported in April that shootings in New York City rose in the first quarter of 2022 to 296 incidents, up from 260 during the same period last year. The trend reflects “continuing and completely unacceptable violence in our streets,” as Police Commissioner Keechant L. Sewell said in a briefing. (It’s worth noting, however, that while gun violence is up, homicides are down — and nowhere near the number they reached in the 1990s.)

Though he officially grew up in Great Neck, Long Island, Rosen was practically raised at the restaurant on the intersection of Flatbush and DeKalb avenues, which was founded in 1950 by his grandfather, Harry Rosen. In the 1950s, Junior’s served as a gathering place for Brooklynites of all ages, especially Dodgers fans hoping to catch a game at Ebbets Field.

By the 1960s, Ebbets Field had been demolished, the Dodgers had decamped to Los Angeles and a significant chunk of Junior’s clientele had moved to suburbia — but Harry Rosen wasn’t deterred. He and a baker developed Junior’s signature cheesecake recipe, which rose in popularity across the city and kept Junior’s on the map.

“I see it definitely as part of the Jewish tradition,” Alan Rosen said of the rich dairy dessert that made Junior’s famous. “I don’t think America identifies it as a Jewish dessert, but it has its roots there for sure. We came here from Eastern Europe. We brought our recipes to the Lower East Side and you know, we went from there.”

Alan and his brother Kevin took over in the early 1990s, and under his leadership, the restaurant took flight. In 2000, he opened a second location in Grand Central Terminal, which was soon followed by locations in Times Square, the Barclays Center and at the Foxwoods Casino in Connecticut. Rosen was also responsible for expanding Junior’s mail-order cheesecake business around the country, significantly propelled by his appearances on QVC and other national television shows.

Despite the enormous growth and some menu expansions — Rosen’s father and uncle, Walter and Marvin, had adapted to accommodate customer tastes in the 1970s, like fried chicken and shrimp parmigiana — the recipe for the famous cheesecake has stayed exactly the same since it was first introduced in 1960.

“Besides the love, its cream cheese, it’s fresh eggs, it’s sugar, heavy cream and a touch of vanilla,” Rosen said. “It’s really not a secret. It’s how we blend it, it’s how we bake it, it’s how we take our time and make it in a water bath. It’s all of those little things combined.”

Calling himself a “purist at heart,” Rosen said his favorite cheesecake flavor is the original. However, if he’s bringing home a cake for the weekend, he’ll often opt for the devil’s food, a plain cheesecake inside a chocolate layer cake which has long been a family favorite.

Rosen said he would “absolutely” hold a gun buyback event like this again, noting that having the Junior’s name attached helps get the word out there and generates more success. “I thought it was amazing,” he said. With nearly 70 guns turned in, last Saturday’s event collected two dozen more weapons than similar recent events, as Grub Street reported.

“We are taught to do good things from early on in our lives,” Rosen said of how his Jewish identity inspired him, quickly adding that he doesn’t know if his commitment to his community is due to his and the restaurant’s Jewish roots, or if it is because of the sense of moral justice his parents instilled in him as a child.

“There’s tons of ways to give charity or help your fellow man or woman,” said Rosen, who is a member of Temple Emanu-El in Harrison, New York. “Do I have that sort of bend to me because of my religion? Possibly. I think it’s more because of my upbringing. My mom, my dad, they made sure to tell me that you do good things for others when you’re fortunate.”