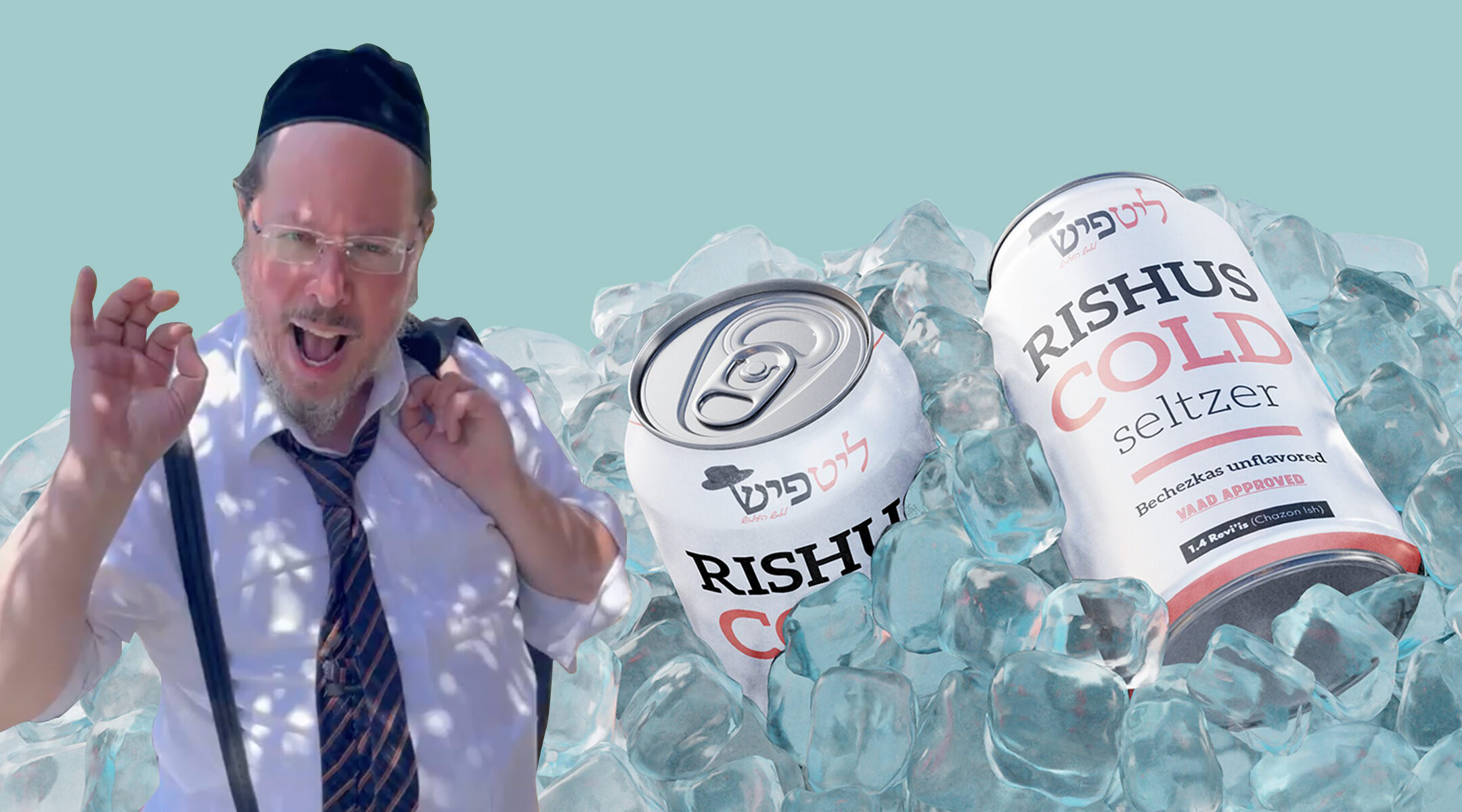 (New York Jewish Week) – A video of an Orthodox Jewish man making a passionate speech about his love for the Talmud and cold seltzer spread like wildfire over Twitter, showing off what makes yeshiva culture such a unique part of Judaism.

Rabbi Aryeh Moshe Leiser, who lives in Monsey, New York, appears to be having the time of his life in the viral video. Posted on Twitter May 31, the video was seen by thousands of people.

Leiser starts off saying that he wants “an Arvei Psachim with a Rabbeinu Dovid, rishus cold seltzer and I just want to check out of life.” (This means, roughly, that he wants to read a specific commentary about a specific chapter of Talmud, with a wickedly cold cup of seltzer at hand.) He then goes into more specifics, talking about how the seltzer has to be in plastic cups — not styrofoam — and eventually he begins singing.

The video was posted by a Twitter user named Ayil Basvach, who deleted it on June 1. “The reason why I took it down is because [Leiser] seemed to be very uncomfortable with it going viral,” Basvach wrote on Twitter. “I never meant to cause anyone agmas nefesh [anxiety], I just loved the video, his exuberance, love for Torah and life (also to show yeshivalites [sic] genuine personality that I grew up with and love).”

This is Rabbi Aryeh Moshe Leiser, the Jewish man took the Orthodox world by storm for his passionate take on cold seltzer and Yeshiva culture.

Still, despite its short shelf life, the video clearly touched a nerve among many religious Jews. People started making merch from the video and someone even commissioned the TikTok meme group Island Boys to give a “Rishus” cold seltzer shoutout.

According to Rabbi David Bashevkin, a writer and Yeshiva University professor, it’s because the video allows people to see yeshiva culture in a “sincere, religiously charming way.”

That’s largely due to Leiser’s use of the Orthodox patois known as “Yeshivish,” he said. For example, “rishus” is not a brand — it directly translates to “wicked” or “evil.”

“It’s a dialect of Hebrew, Yiddish and English all together,” Bashevkin said. “Saying ‘rishus cold seltzer’ is an extraordinarily charming way of saying you want a really cold beverage, but in a Yeshivish language that highlights your insider knowledge of that world.”

“When he says ‘checking out of life,’ it’s like, not being disturbed and allowing yourself to engage in total learning,” Bashevkin said. “It’s the [Yeshivish] equivalent of someone else’s dream to just be on the beach reading a book.”

Leiser declined to comment about his newfound fame. But his brother-in-law, Rabbi Avraham Walkin, was happy to explain the backstory of the viral video. He told the New York Jewish Week that, after giving a lecture at a Monsey yeshiva, some students stopped him in the street and asked if Leiser could “send a message” to other students.

“He had no intention of it going viral on social media,” Walkin said, adding that while there are people who “work their whole life trying to get followers and to be good at social media,” Leiser is not that type of person.

“Here’s a guy who didn’t want that, and became viral,” Walkin said. “It’s like God saying, ‘If I need someone to become famous, they’ll become famous.’ The guy who tried to hide from it became more popular.”

Walkin added that Leiser is an “innocent family man” who is surprised to see what happened with this video. “He wanted absolutely no media attention,” Walkin said. “I was surprised by how many people texted me saying, ‘You’re related to that guy, wow.’ For some people in the yeshiva world, this was the Super Bowl.”

Someone even commissioned TikTok meme stars The Island Boys to give Leiser a shout out. pic.twitter.com/YeRVeHLtNN

At the end of the video, Leiser shouts “blood, sweat, tears!” which also happens to be the title of his most recent book, a memoir about being a disciple in a yeshiva. Basvach wrote on Twitter on June 2 — the day after he removed the viral video from his account — that the book is “one of the most inspirational things I’ve read in a long time.”

He added that while this chapter is about Passover, the longing to study the Torah relates to the upcoming holiday of Shavuot, which commemorates the giving of the Torah at Mount Sinai. The holiday begins this year on the evening of Saturday, June 4.

“I think there was something very real and very sweet about this video that underlies a sincerity about life in the yeshiva world,” Bashevkin said.

“Everything in the world as you grow up and mature, even within the Jewish and Orthodox world, pulls you away from that instinctive love,” he added. “To love anything so deeply is something that requires a cultural universe to reinforce, and there’s no world that does that better than the world of yeshiva.”