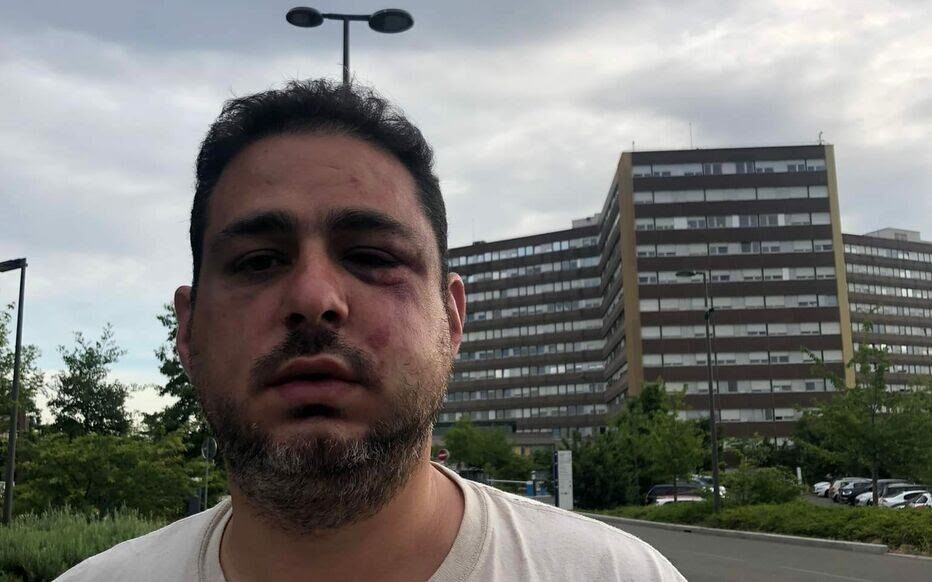 Audrey Rozenhaft uploaded a photo of her husband Liron after he was beaten in Strasbourg, France, June 2, 2022. (Courtesy of Audrey Rozenhaft)
Advertisement

(JTA) — A group of men violently assaulted a Jewish man while he was putting up campaign posters for his wife, who is running for a legislative seat in Strasbourg, France, the victim told police.

Initially, two men who approached Liron Rozenhaft, 41, on Thursday called him a “dirty Jew” after reading the name of his wife, Audrey Rozenhaft, on the posters, Le Parisien reported on Friday. She is running as a candidate for the center-right Republicans party in the 1st constituency of Bas-Rhin, which includes the city’s center and multiple outer districts, in elections scheduled for June 23.

Liron Rozenhaft said that the two men pulled down the posters and followed him elsewhere on a scooter. Several other men followed in pursuit. He said he told the men that France “is still a democracy.”

In a Facebook post about the incident, Audrey Rozenhaft wrote that he was left unconscious, and said that authorities have allowed for “an explosion crime and violence” in the area. Rozenhaft was left with minor injuries, including a concussion, according to the Le Parisien.

Strasbourg Mayor Jeanne Barseghian condemned the incident in a statement, writing that “we condone no violence, and when it targets democratic discourse it’s particularly shocking.”

Barseghian did not mention the alleged antisemitic element of the incident. Police are investigating the allegations, she said.