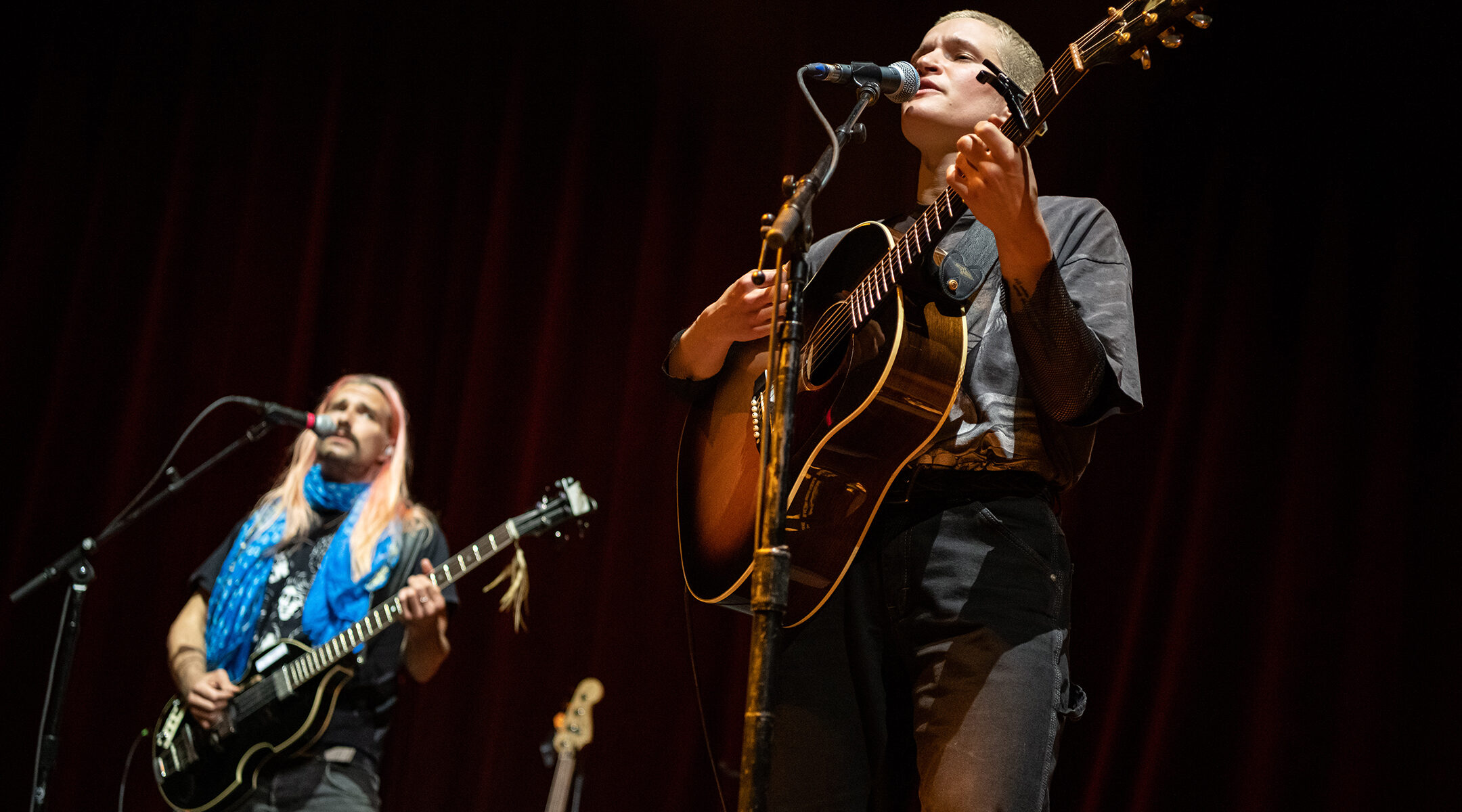 Max Oleartchik, left, who is Israeli, and Adrianne Lenker of Big Thief perform at The Anthem in Washington, D.C., April 21, 2022. (Kyle Gustafson for The Washington Post via Getty Images)
Advertisement

(JTA) — Days after defending their decision to play in Tel Aviv, the hometown of their bass player, the indie folk rock band Big Thief canceled two scheduled Israel shows, writing that they “oppose the illegal occupation and the systematic oppression of the Palestinian people.”

Last week, the Grammy-nominated band had announced two shows at Tel Aviv’s Barby venue in July, and said that they would donate the gig profits to NGOs that aid Palestinian children. They also noted that they wanted to explore bassist Max Oleartchik’s hometown, and said that they were unsure of their thoughts on the Boycott, Divestment and Sanctions movement, the international movement to boycott Israel.

“We are well aware of the cultural aspect of the BDS movement and the desperate reality of the Palestinian people,” the band wrote at the time. “In terms of where we fit into the boycott, we don’t claim to know where the moral high ground lies and we want to remain open to other people’s perspectives and to love beyond disagreement.”

Their opinions had changed by Thursday, when the band released a new statement.

“Since announcing these shows in Israel we have been in constant dialogue with friends, family, BDS supporters and allies, Palestinians, and Israeli citizens who are committed to the fight for justice for Palestinians,” the band wrote.

“Our intent in wanting to play the shows in Tel Aviv, where Max was born, raised, and currently lives, stemmed from a simple belief that music can heal. We now recognize that the shows we booked do not honor that sentiment. We are sorry to those we hurt with the recklessness and naivete of our original statement on playing in Israel and we hope those who were planning to attend the shows understand our choice.”

We will be canceling our 2 shows in Tel Aviv. pic.twitter.com/ocSFtgnYz4

The Barby venue posted an angry message to social media in response on Thursday, calling the band “spineless” and saying Big Thief had reached out to schedule the shows, not vice versa. The venue also accused the band of “hypocrisy,” and of bowing to pressure from “paid protesters.”

“BDS has been with us for 20 years, it has not changed since the last time they were in the country,” the venue wrote in Hebrew on Facebook. “The insults on Instagram, just made you fold / scared. Some paid protesters outside the hall in Europe made your managers kneel, ‘and the solution’ – let’s skip Israel, let’s give up our audience, where it’s less important.”

The venue continued: “In fact, your cancellation only made me sad for you, a bunch of poor, spineless musicians who are afraid of their own shadow.”

Max Oleartchik is the son of Alon Oleartchik, one of Israel’s most well-known musicians, who rose to prominence with the 1970s rock band Kavaret and has since released more than 10 solo albums in different genres.

Big Thief, which formed in 2015 in Brooklyn, released its fifth album to continued critical acclaim earlier this year. The band was nominated for multiple awards at the 2020 Grammys but did not win.

The band had previously long opposed the BDS movement. Journalist Omar Sakr wrote on Monday that singer Adrienne Lenker had told him so unprompted in an interview a few years earlier, and that afterward the band’s publicist killed his article.

“[H]alfway through the interview with the singer, she blurts out that they play in Israel, because one of their band members is from there, and how they don’t agree with BDS,” he wrote.