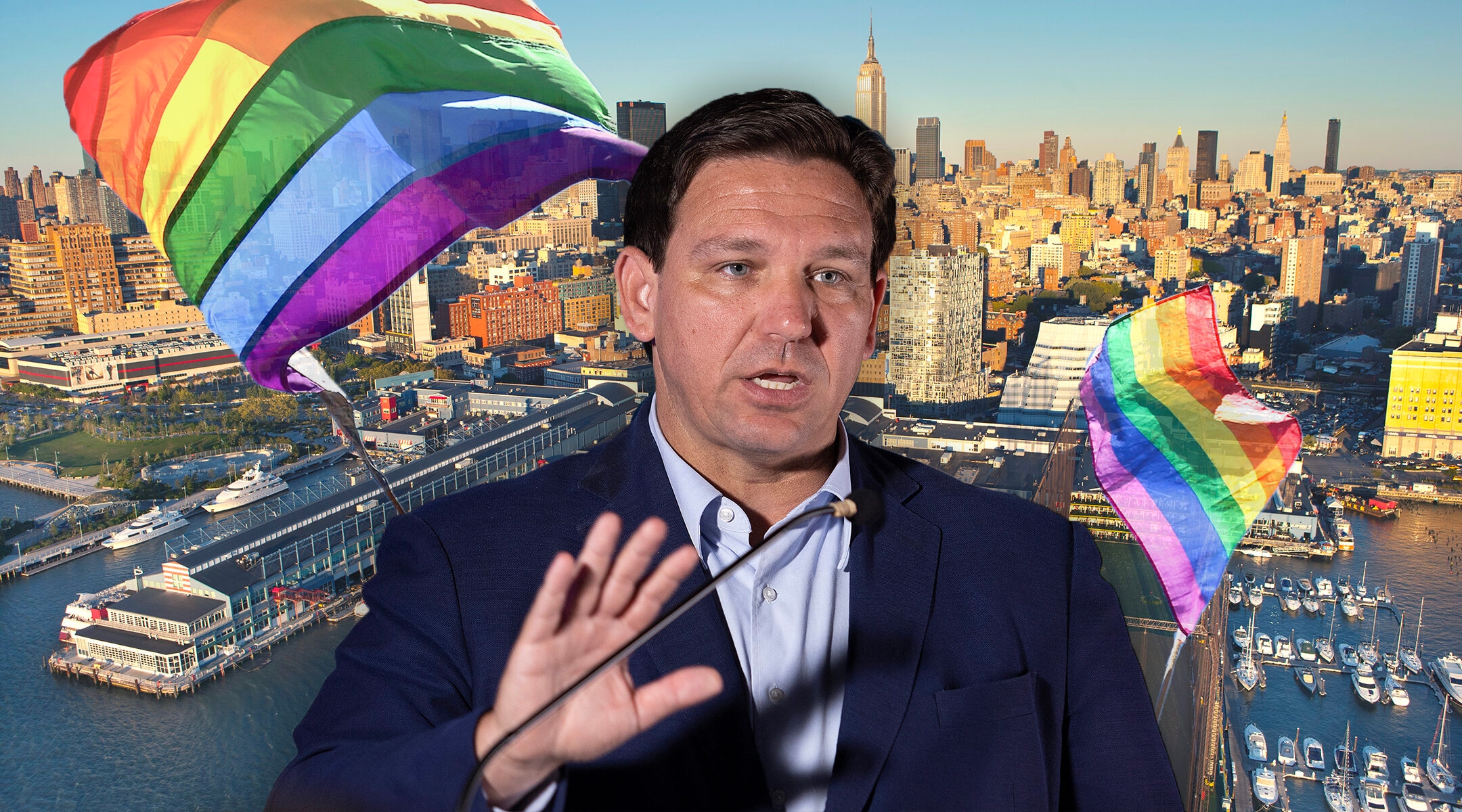 (New York Jewish Week) — A conservative Jewish think tank will hold a daylong conference at Chelsea Piers on Sunday, one month after asserting that it was blocked from holding the event at the Museum of Jewish Heritage because Florida Gov. Ron DeSantis is among the speakers.

DeSantis will be speaking Sunday at the Jewish Leadership Conference, sponsored by the Tikvah Fund, in a private event venue at Pier 60 in Manhattan.

The Museum of Jewish Heritage, a Holocaust and Jewish cultural space in Lower Manhattan, disputed a complaint by Tikvah, aired in a Wall Street Journal op-ed, that the museum had cancelled an agreement to host the conference because it featured DeSantis. Tikvah claimed it was told that DeSantis — who has pushed a number of bills targeting Florida’s LGBTQ community — didn’t “align with the museum’s values and its message of inclusivity.”

Tikvah Fund Executive Director Eric Cohen told the New York Jewish Week that the conference will focus on ideas about “the Jewish future.”

“We look forward to an important gathering — with roughly 20 great speakers — focused on the great questions facing the Jewish people, America, Israel and the West,” Cohen said.

A number of left-wing activist groups are planning to protest the event, including United Against Racism and Fascism and Jews For Racial & Economic Justice.

JFREJ communications director Sophie Ellman-Golan said that the event is regressive and is “aligned with a white Christian nationalist movement.”

“If you look at what DeSantis is doing, it is a very clear effort to annihilate trans people,” Ellman-Golan said. “If anyone doesn’t fit into their narrow vision of ‘Judeo-Christian’ society, they are not welcome and must be silenced, and must not even exist.”

In March, DeSantis signed legislation — called the “Parental Rights in Education” bill by supporters, but the “Don’t Say Gay” bill by its critics — that prohibits instruction and discussion about sexual orientation and gender identity in some elementary school grades. His administration has also sought to ban transition-related care for transgender minors and Medicaid coverage for medical procedures related to gender reassignment.

In contrast, Chelsea Piers is honoring LGBTQ Pride Month with rainbow motifs in its marketing and social media. Pier 60, which is part of Chelsea Piers, did not respond to a request for comment, but did tell the New York Daily News that the event “in no way implies that we endorse the respective organization or its speakers.”

The event is taking place in State Senator Brad Hoylman’s Chelsea district. Hoylman said in a statement that he opposes DeSantis speaking in New York.

“Through his ‘Don’t Say Gay’ law, Ron DeSantis has caused incalculable pain and suffering to LGBTQ children and their families in Florida,” Hoylman said.

Hoylman, who is one of two openly gay state senators in New York, called on Chelsea Piers to cancel this “offensive speaking engagement immediately.”

“It’s an absolute outrage that a homophobic and transphobic official like DeSantis would be invited to speak during Pride Month in the heart of Chelsea, one of New York’s largest LGBTQ neighborhoods,” Hoylman said.

A protest against @ChelseaPiersNYC has been called for 8am Sunday.

This follows Chelsea Piers refusing to cancel hosting a conference feat. Ron DeSantis amid calls to cancel from queer & Jewish community members, and electeds such as @bradhoylman, @ebottcher, and @DeborahJGlick. pic.twitter.com/hqwuhDNCOR

Council members Erik Bottcher and Deborah Glick, whose districts include Chelsea, also called on Chelsea Piers to cancel the event.

Glick, who is a lesbian and Jewish, told the New York Jewish Week that DeSantis passed “insulting” legislation in Florida and holds “antisemitic views,” an apparent reference to a recent tweet by DeSantis targeting the left-wing Jewish philanthropist George Soros.

“Someone who has his kind of record shouldn’t be invited to New York during Pride Month,” Glick said.

She added that many of the speakers at the event, including Meadows and DeSantis, have supported “the big lie,” Trump’s false assertion that the 2020 election was stolen by President Joe Biden.

“If any community should understand the danger of the big lie, it is the Jewish community,” Glick said. “To invite people who are supportive of the big lie that will undermine American democracy. It is a mistake.”

In its oped about the cancelled Museum of Jewish Heritage event, Tikvah officials said DeSantis had been invited because “a remarkable Jewish renaissance is under way in Florida.” The oped credited “Florida’s booming and low-tax economy” and “tax credits that assist many parents in sending their children to Jewish day schools” in attracting a growing number of Jewish families, especially Orthodox families.

In a statement to the New York Jewish Week, DeSantis’s office did not address criticisms of his LGBTQ policies, and instead asserted that he is “the most pro-Israel governor in the nation.”

“The Governor will always stand up for what is right and will not be deterred by the radical Left,” the statement said.