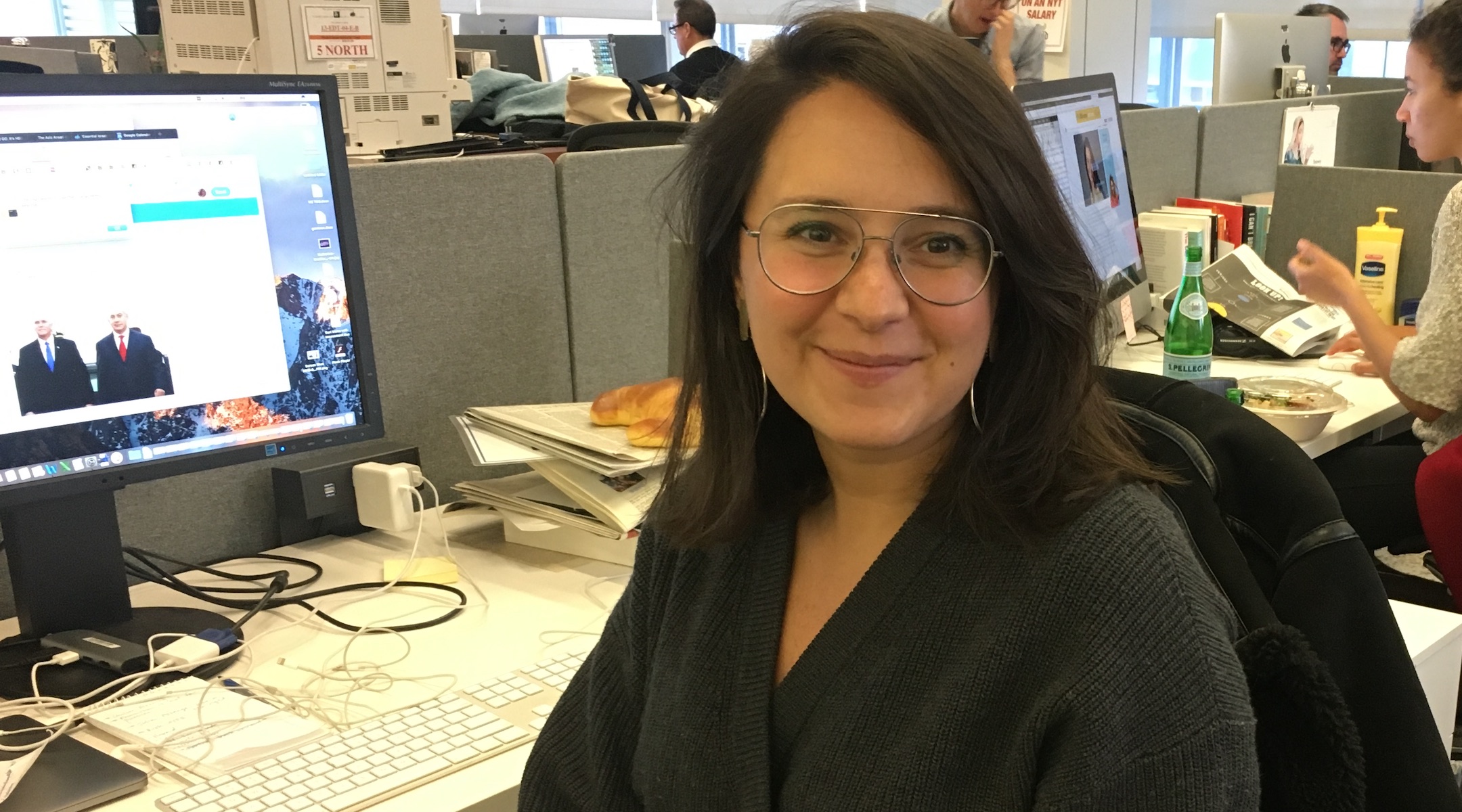 (JTA) — Bari Weiss, the Jewish opinion writer and editor who has been a lightning rod for left-wing critics, has resigned from The New York Times.

The author of a much-discussed recent book on anti-Semitism, Weiss announced her resignation in a blistering letter to New York Times publisher A.G. Sulzberger posted to her website Tuesday morning. She wrote that the newspaper had become a place where “intellectual curiosity — let alone risk-taking — is now a liability” and said she had been subjected to bullying from colleagues who disagreed with the ideas she advanced in her columns and on Twitter.

“They have called me a Nazi and a racist; I have learned to brush off comments about how I’m ‘writing about the Jews again,'” she wrote. “Several colleagues perceived to be friendly with me were badgered by coworkers. My work and my character are openly demeaned on company-wide Slack channels. … I’m no legal expert. But I know that this is wrong.”

Weiss’s resignation is the latest in a series of changes at the Times’ Opinion section that began last month when the paper ran a piece by Arkansas Sen. Tom Cotton, a Republican, calling for a military response to rioting and looting — a strategy that critics of the column said would endanger the overwhelming majority protesting peacefully for racial justice. The piece elicited unusual resistance from journalists inside the Times newsroom and eventually led to the resignation of the Opinion section’s editor, James Bennet, who admitted that he had not read the piece prior to publication.

Bennet made a point of bringing in conservative voices, including Weiss and Bret Stephens, whose columns have also been dogged by criticism, and Weiss suggested in her letter that Bennet’s departure had worsened her work situation.

“Never believe an editor or publisher who urges you to go against the grain,” she wrote. “Eventually, the publisher will cave to the mob, the editor will get fired or reassigned, and you’ll be hung out to dry.”

Weiss did not indicate what she plans to do next and did not immediately respond to a request for comment. Katie Kingsbury, the Times’ acting editorial page editor, said in a statement that she is committed to an intellectually and politically diverse opinion section.

“We appreciate the many contributions that Bari made to Times Opinion,” Kingsbury said in a statement issued to NBC News. She added, “I’m personally committed to ensuring that The Times continues to publish voices, experiences and viewpoints from across the political spectrum.”

Since starting as an op-ed staff writer and editor at The Times in 2018, Weiss has risen to prominence for her commentary on issues such as anti-Semitism, Israel, the #MeToo movement and cultural appropriation. Her writing often criticizes what she sees as hypocrisies among progressives, which has earned her both praise and vilification.

Perhaps her most contentious claim deals with what she sees as an effort by young progressives to stifle free speech in what has been described by conservatives as “cancel culture.”

Last month, she wrote on Twitter that the Cotton saga reflected a “civil war inside The New York Times” between what she described as “The Old Guard” subscribing to “civil libertarianism” and “The New Guard … in which the right of people to feel emotionally and psychologically safe trumps what were previously considered core liberal values, like free speech.” This week, Weiss was among 150 prominent intellectuals of diverse political orientations to sign a public letter defending the value of open debate and the free exchange of ideas, calling them “the lifeblood of a liberal society.”

In her resignation letter, Weiss said fear of eliciting critical reactions increasingly shape what is published at The Times.

“Op-eds that would have easily been published just two years ago would now get an editor or a writer in serious trouble, if not fired,” she wrote. “If a piece is perceived as likely to inspire backlash internally or on social media, the editor or writer avoids pitching it. If she feels strongly enough to suggest it, she is quickly steered to safer ground. And if, every now and then, she succeeds in getting a piece published that does not explicitly promote progressive causes, it happens only after every line is carefully massaged, negotiated and caveated.”

Weiss criticized the way a number of articles were handled, several of which related to Jewish themes.

“It took the paper two days and two jobs to say that the Tom Cotton op-ed ‘fell short of our standards.’ We attached an editor’s note on a travel story about Jaffa shortly after it was published because it ‘failed to touch on important aspects of Jaffa’s makeup and its history.’ But there is still none appended to Cheryl Strayed’s fawning interview with the writer Alice Walker, a proud anti-Semite who believes in lizard Illuminati,” she wrote.

Weiss has been a persistent critic of progressive spaces that have excluded Jews identifying as Zionists. She has written about accusations that Women’s March organizers did not address anti-Semitism and a Chicago lesbian rally that excluded Jews who carried banners with a Star of David because the event was “anti-Zionist” and “pro-Palestinian.”

“What concerns me, and this is sort of what’s behind my piece on the Women’s March or the [Chicago] Dyke March, is a progressivism that forces Jews to check their Jewish or pro-Israel or Zionist identity at the door in order to be good progressives,” Weiss told the Jewish Telegraphic Agency in 2018.

Prior to working at The Times, Weiss wrote for The Wall Street Journal, where she said she experienced similar frustrations. (Before that, she wrote for Tablet, an online Jewish magazine.)

“I was no longer able to write for the op-ed page because I kept getting stonewalled because I was told that my pieces were too critical of Trump and Trump supporters,” she said in 2018.