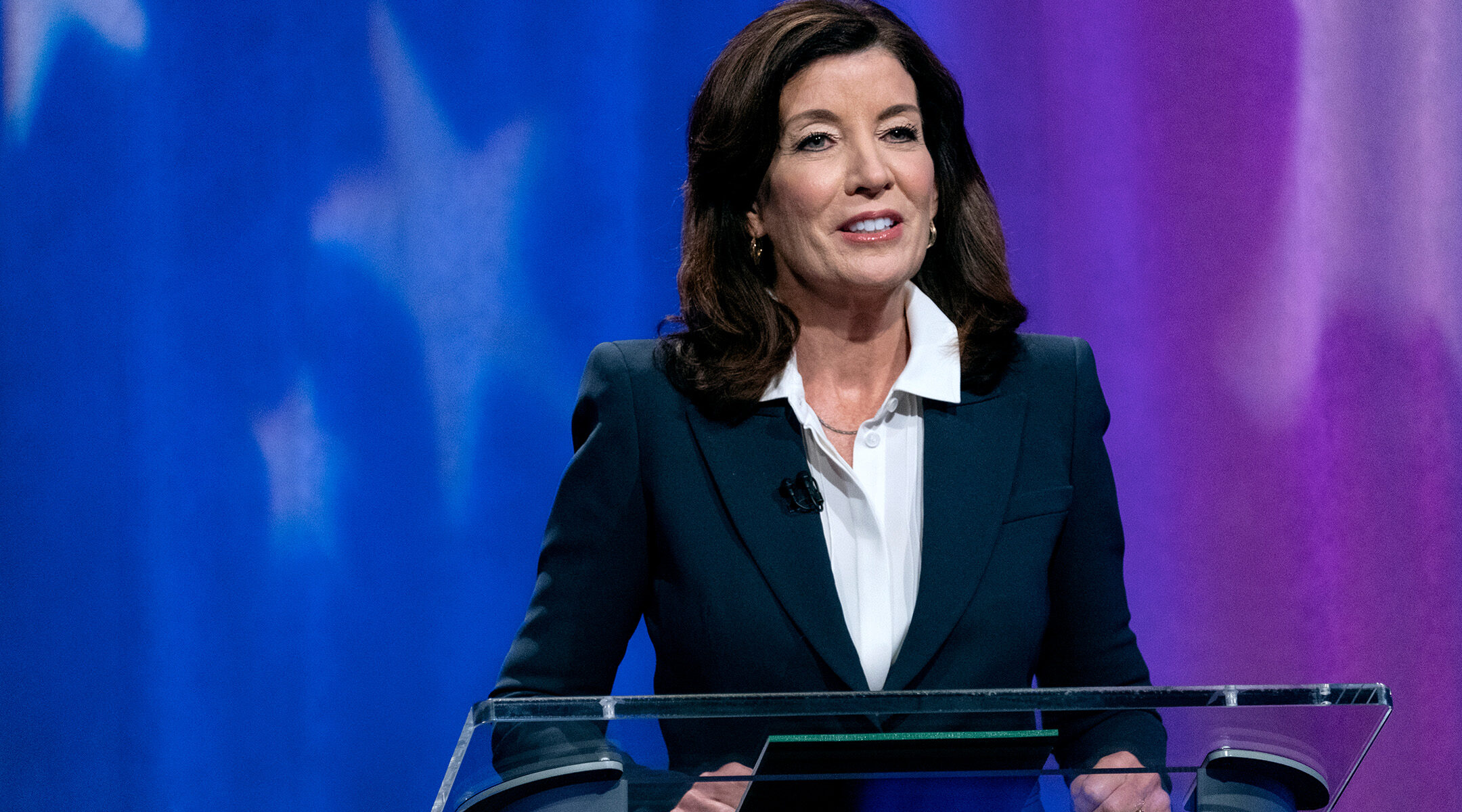 New York Gov. Kathy Hochul debates in the race for governor at the studios of WNBC4-TV June 16, 2022 in New York City. She won her campaign for reelection against Republican Rep. Lee Zeldin. (Photo by Craig Ruttle-Pool/Getty Images)
Advertisement

(New York Jewish Week) — Gov. Kathy Hochul secured endorsements for her reelection campaign from both sides of the Satmar community of New York this week, building support with a voting bloc with tens of thousands of voters.

Two pamphlets in Yiddish circulated endorsing Hochul and her current Lieutenant Governor Antonio Delgado. One pamphlet went out in the Satmar community led by Rabbi Aaron Teitelbaum in Kiryas Joel, and the other went out in Rabbi Zalman Teitelbaum’s community in Williamsburg. The Hasidic movement has been split in recent years over a succession controversy.

Sam Stern, who represents the Zalman Teitelbaum Satmar community of Williamsburg, said this “alliance with Hochul represents 80 percent of the Hasidic Williamsburg vote.”

“On a high-turnout election, we can expect 10,000 votes,” Stern told the New York Jewish Week.

Stern said his community endorsed Hochul because she expanded child care and she is “understanding of religious rights.”

“Our communities have very large families,” Stern said.  “Our families depend on child care. [Hochul] is the most helpful to our causes.”

Hochul has regularly toured Orthodox day schools and synagogues, fought to add more funding for Holocaust survivors and vetoed a bill that would have stopped housing development in upstate New York’s Hasidic community.

It was our honor to welcome today @GovKathyHochul and @LtGovDelgado to the UJO, meeting with community leaders. We thanked her and had a great discussion regarding:
* Combating hate crimes
* Religious freedoms
* Affordable housing
* Child Care
* Supporting holocaust survivors pic.twitter.com/SGt8eYDQ9u

When asked why his community chose to endorse a liberal candidate over a conservative, Stern said that Hochul is an old-school Democrat who is still a fighter for religious freedoms and liberty.

“These days, a lot of Democrats dropped religious freedom from what they are fighting for,” Stern said.  “Hochul is still from the generation that shares our values.”

Stern also said that his community had a meeting with Delgado and were “really impressed” by him.

“We also endorsed Delgado who made a really strong impression with his commitment to religious values and family,” Stern said.

Rabbi Moishe Indig, a Williamsburg activist who is part of the Satmar community affilated with Aaron Teitelbaum, told the New York Jewish Week that his community endorsed Hochul because she is the incumbent.

“If we have a good relationship, then the policy is to go with the incumbent,” Indig said.  “This policy has been going back for years when there was only one side of the Satmar community.”

Indig said his endorsement represents Satmar Jews across the state, including the Orange County enclave of Kiryas Joel and parts of Williamsburg.

Hochul was previously endorsed in March by Orthodox rabbis from the Five Towns and Far Rockaway on Long Island.

The other Democratic candidates running against Hochul are Public Advocate Jumaane Williams and Rep. Tom Suozzi.

Indig said that just because they endorsed Hochul “does not mean other candidates are not good.”

“We have to pick one,” Indig said.

A representative from Hochul’s office declined to comment for this article.

The primary for the governor race, lieutenant governor, attorney general, comptroller and Republican candidate for U.S. Senate will take place on June 28.