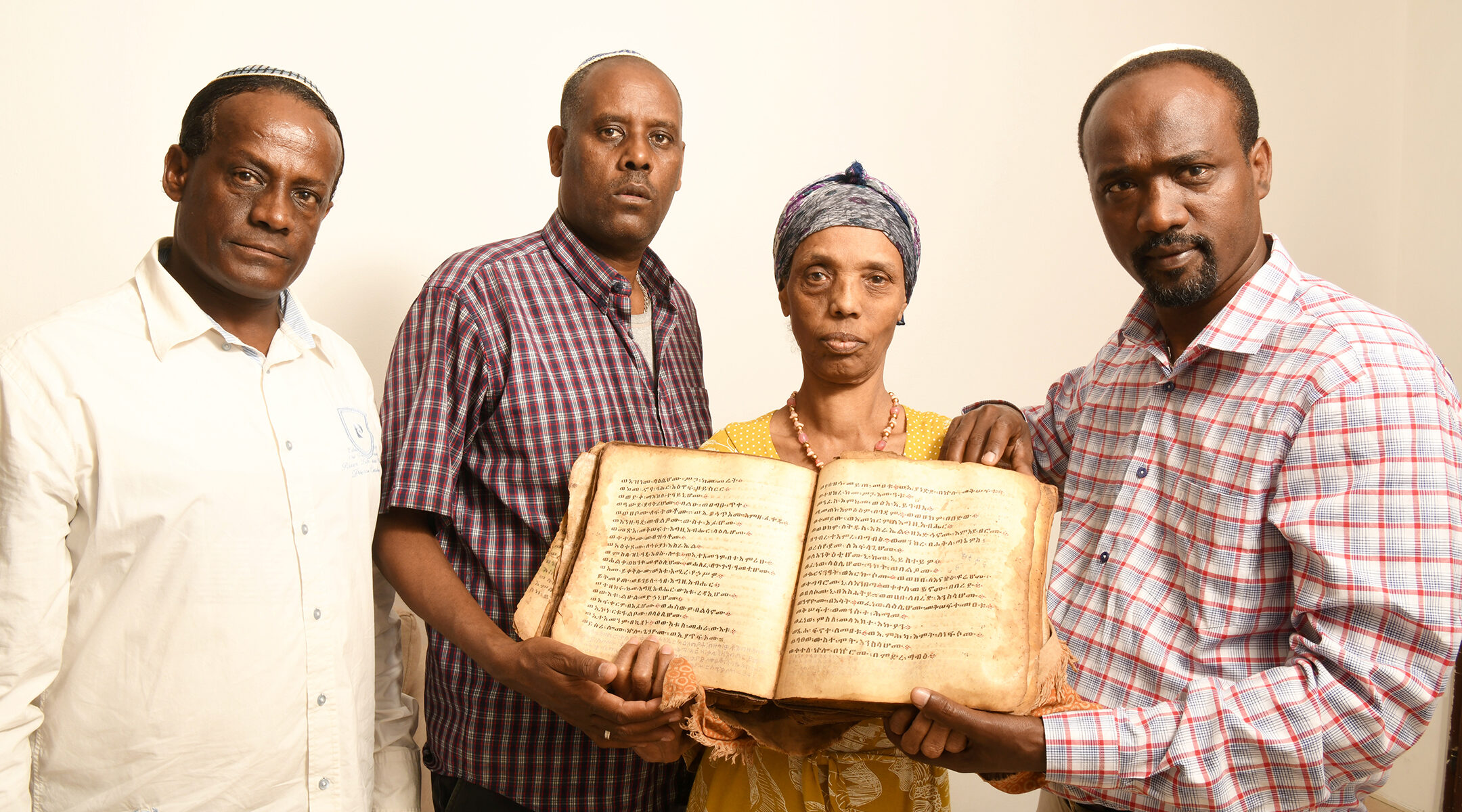 ADDIS ABABA, Ethiopia (JTA) — When they flew out of this country for Israel three decades ago, Askabo Meshiha’s family left something valuable behind.

Unlike many other Ethiopian Jews who were airlifted to Israel in 1991, they didn’t say goodbye to any relatives. But they left behind a centuries-old book of psalms written in Ge’ez, a Semitic language used by Jewish clergy in Ethiopia.

They had to secretly and on short notice leave their rural homes for the capital Addis Ababa with as little baggage as possible. So the family entrusted non-Jewish neighbors with keeping the book safe until they could retrieve it. From Israel, they tracked the book’s whereabouts for more than 30 years, never losing hope of retrieving it — even after their native country fell into civil war and the book wound up in the hands of a Christian priest who demanded a steep ransom to release it.

Their perseverance paid off.

In March, an unusual set of circumstances finally allowed the family to be reunited with the document, a rare but tangible relic from the rich traditions of one of the world’s oldest Jewish communities. The family now hopes to restore the book and use it to strengthen their community’s fading identity.

“When I posted the picture of the book in the family WhatsApp group, people went nuts, it’s like a long-lost relative had returned,” said Ayanawo Ferada Senebato, Mashiha’s 43-year-old grandson and a journalist and activist promoting causes linked to Ethiopian Israelis.

Senebato and two of his cousins made their way to northern Ethiopia earlier this year amid the civil war raging there, acting on a tip from Ethiopia-based friends of their grandmother: The Christian priest who had possessed the book for years had been arrested and needed money to get out of jail.

In previous negotiations, the priest had demanded more than $10,000 to release the book. But now, pressed for cash, he agreed to part with it for $1,200.

Senebato boarded a plane to Ethiopia with his older cousins: Getnat Eshato Selam, a father of six who lives in Lod and works at Ben Gurion Airport, where he and his family landed in 1991, and David Malsa Makuria, who lives in Ashkelon and works at a water sanitation company. Together, they negotiated the deal and wrapped the fragile book in an Israeli flag they had brought.

Dozens of square parchment pages measuring 11-by-11 inches had fallen out of the binding, and others were barely attached. But the book’s significance remained easy to identify: Among the multiple types and colors of ink, some segments are written in red — a way of signifying that a kes, the Amharic-language word for a rabbi, had made additions to the original.

Even speakers of Amharic typically cannot read or communicate in Ge’ez, which is decipherable only to a dwindling group of spiritual leaders of Ethiopian Jewry, who mostly now live in Israel. 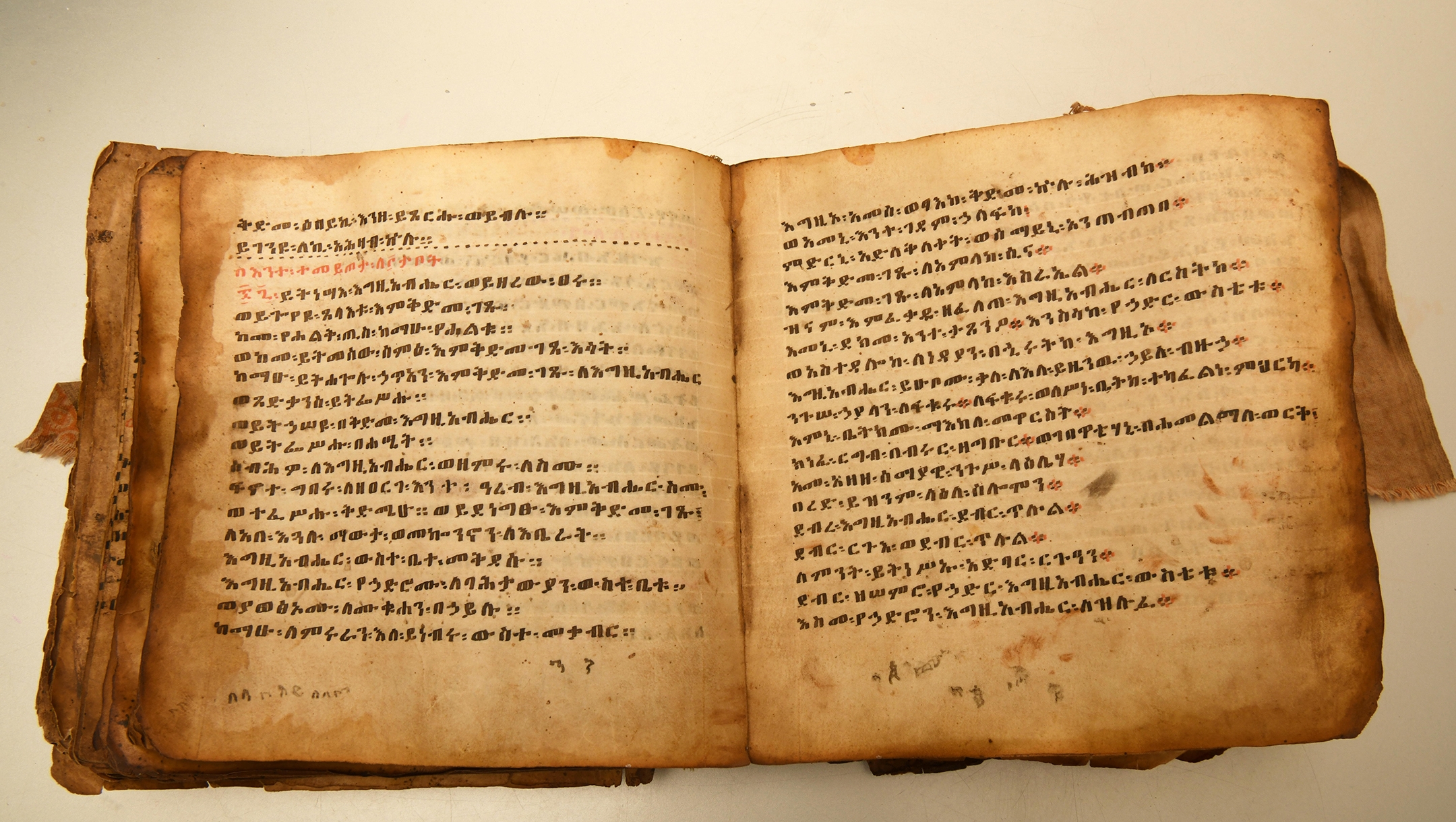 A view of the Orit book that Ayanawo Ferada Senebato and his family retrieved in Ethiopia and smuggled to Israel in February 2022. (Yossi Zeliger)

Last week, the book was used in prayer, probably for the first time in at least 34 years, at the home of Mentasnut Memo, a kes who lives in Kiryat Gat in southern Israel. He found scribbled on one page of the book the name of Senebato’s great-great-grandfather, Erqshen Sequin.

“I was overcome with pride and excitement when the book was read, and when the name of my ancestor was found,” Senebato said.

Senebato said he is unconcerned that he broke Ethiopia’s laws against taking historically significant artifacts out of the country, though he declined to name the priest who released the book to avoid implicating someone who remains there.

“This book has been in my family long before any of Ethiopia’s laws were written,” he said.

The older cousins remember the book from their time in Ethiopia, where they lived in the village of Vinerb near Lake Tana, about 250 miles northeast of Addis Ababa.

“I was too young to remember it,” said Senebato. “But we all felt like it was a piece of our family, [that it has been] returned to it [the family], when we took it in our hands.”

The book is significant to far more than just Askabo Meshiha’s extended family. It is one of just a handful texts in Israel of the Orit, an Ethiopian variant of the Hebrew Bible that predates the advent of that standardized text. It’s a remarkable reminder of how ancient Ethiopian Jewry is: Some believe it to be more than 2,600 years old.

Ethiopian Jews brought a few precious Orit books with them when they immigrated to Israel beginning in the 1980s, but each document offers a distinct and partial representation of its congregation’s history, devoutness and rabbinical traditions. The largely oral transmission of the Orit has varied greatly between regions and even communities in Ethiopia.

Recognizing the paucity of data about the Orit and the danger that knowledge about it could disappear after the immigration of nearly all of Ethiopia’s Jews to Israel, Tel Aviv University opened the world’s first academic program focused on the holy scriptures of Ethiopian Jews in 2020.

“These cultural treasures are facing extinction,” Dalit Rom-Shiloni, the researcher leading the program, said at the time.

The Meshiha family’s copy attests to the unwritten liturgy that has evolved around the Orit over the centuries. It included songs, rabbinical interpretations and stories in Amharic and Tigrinya.

Scholars at Israel’s National Library who examined the Meshiha family’s book at the family’s request believe it is about 200 years old. But family members believe it is older still. According to family tradition, the book was handed down to an ancestor who lived 300 years ago.

Senebato has no intention of donating the book for academic purposes.

“We did not bring it here to sit in some museum. The book needs to be restored and used. Carefully, consciously, sparingly — but used,” he said.

Renewed interest in Ethiopian Jewish traditions after decades of assimilation offers opportunities for the book’s use. Ignored by Israel for decades, Sigd, the main holiday of Ethiopian Jews, is receiving growing recognition since its 2008 inclusion in the official calendar of national holidays and amid growing interest by young Israeli Ethiopians in their community’s fading heritage.

Some of that growing interest has been spurred by a global reckoning over racism. Many Ethiopian Israelis have expressed solidarity with the Black Lives Matter movement, citing racism they say they experience in Israel.

Senebato said his family’s book shows that Ethiopian Israelis need not look to movements based in the United States or elsewhere to find meaning in their community.

“This is tangible evidence of over 2,000 years of Jewish Ethiopian culture,” Senebato said. “It is powerful, and it needs to be used to remind our community’s youth [that] they are Jews from Ethiopia, living in the Jewish homeland. And that’s the real story in this book.”