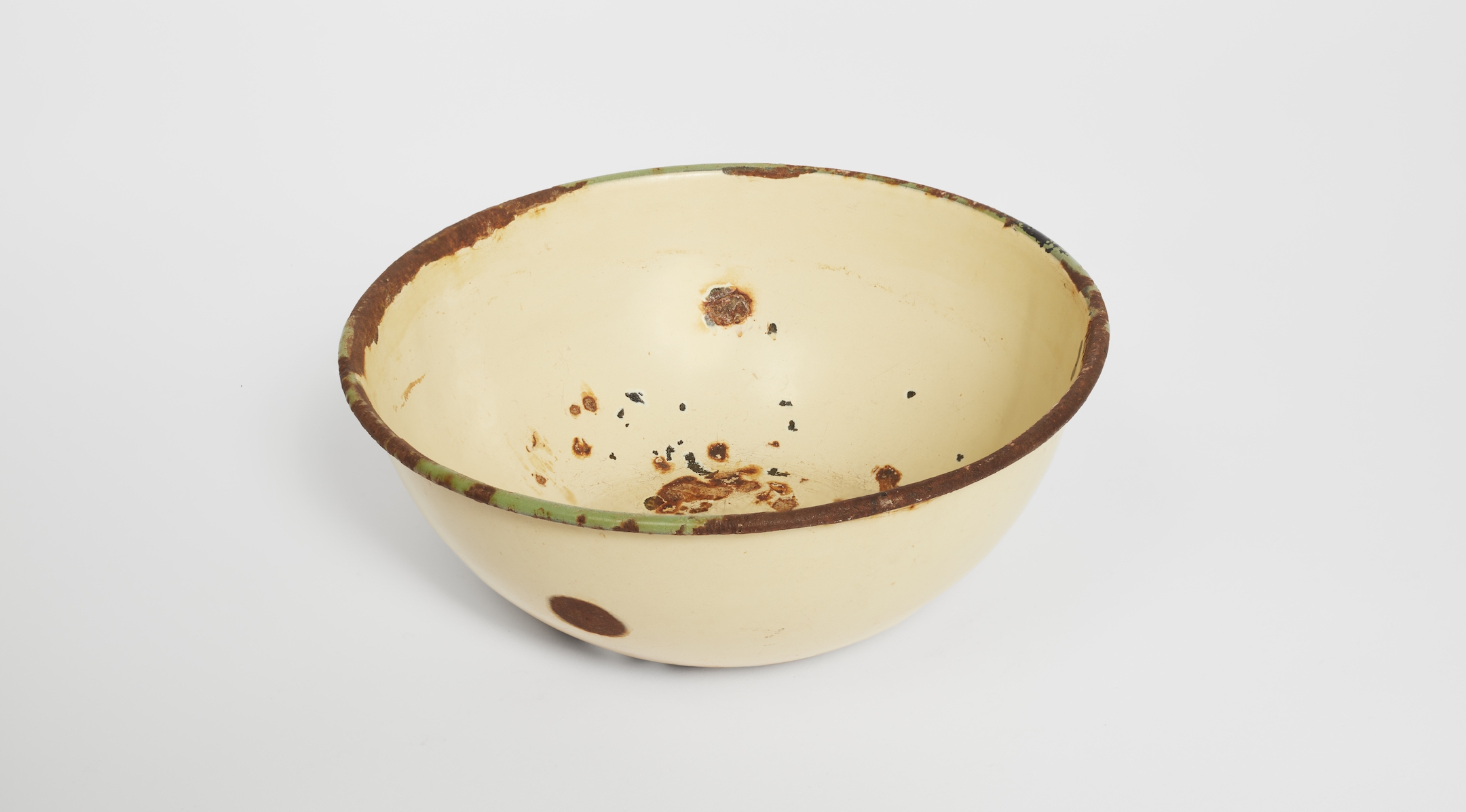 (New York Jewish Week) — A young child’s diary, a favorite doll, a cookbook of family recipes, a report card, a Torah scroll smuggled to the United States and a silver spoon found among the rubble at a concentration camp.

All of these objects are on display in “The Holocaust: What Hate Can Do,”  an expansive new permanent exhibition at the Museum of Jewish Heritage in Lower Manhattan that opened over the holiday weekend. The exhibit emphasizes the individual human stories and the Jewish lives lived before, during and after the Holocaust.

The 12,000-square-foot, two-story exhibit attempts to shed new light on Holocaust education by creating a compelling narrative of the Holocaust, antisemitism, Jewish resistance and perseverance. The exhibit weaves together the individual stories of 750 objects and artifacts, as well as first-person testimonies, photographs and text.

For Judy Baumel-Schwartz, the exhibit’s curator and Holocaust scholar at Bar-Ilan University, working on the exhibit “has been one of the high points of my professional career.

“As a historian specializing in the Holocaust, I have always taught my students, through stories and documentation, about what happened, and why it happened,” she said in a press release. “Here, for the first time, I can actually show people how it happened and to whom it happened through hundreds of objects and graphics.”

One such object on display is a white enamel bowl that belonged to the Burbea family who were first sent to the Giado concentration camp for Libyan Jews. They were only allowed to take a few objects with them when they were then deported to the Civitella del Tronto camp in Italy and, from there, sent to Bergen-Belsen in Germany. The bowl stayed with them — when their youngest son was born in Bergen-Belsen in 1944, the family used it to carry the boy to the mohel for his circumcision.

Baumel-Schwartz donated the bowl for the museum to use in the exhibit —  it was given to her more than 40 years ago by the mother of the Burbea family, who had survived. “She looked at me and said, ‘You’re starting to teach this for all of us. The bowl had done what it needed to for me. We don’t need it anymore. But I want you to take it. I want you to show it to your students and tell our story,’” Baumel-Schwartz recalled. 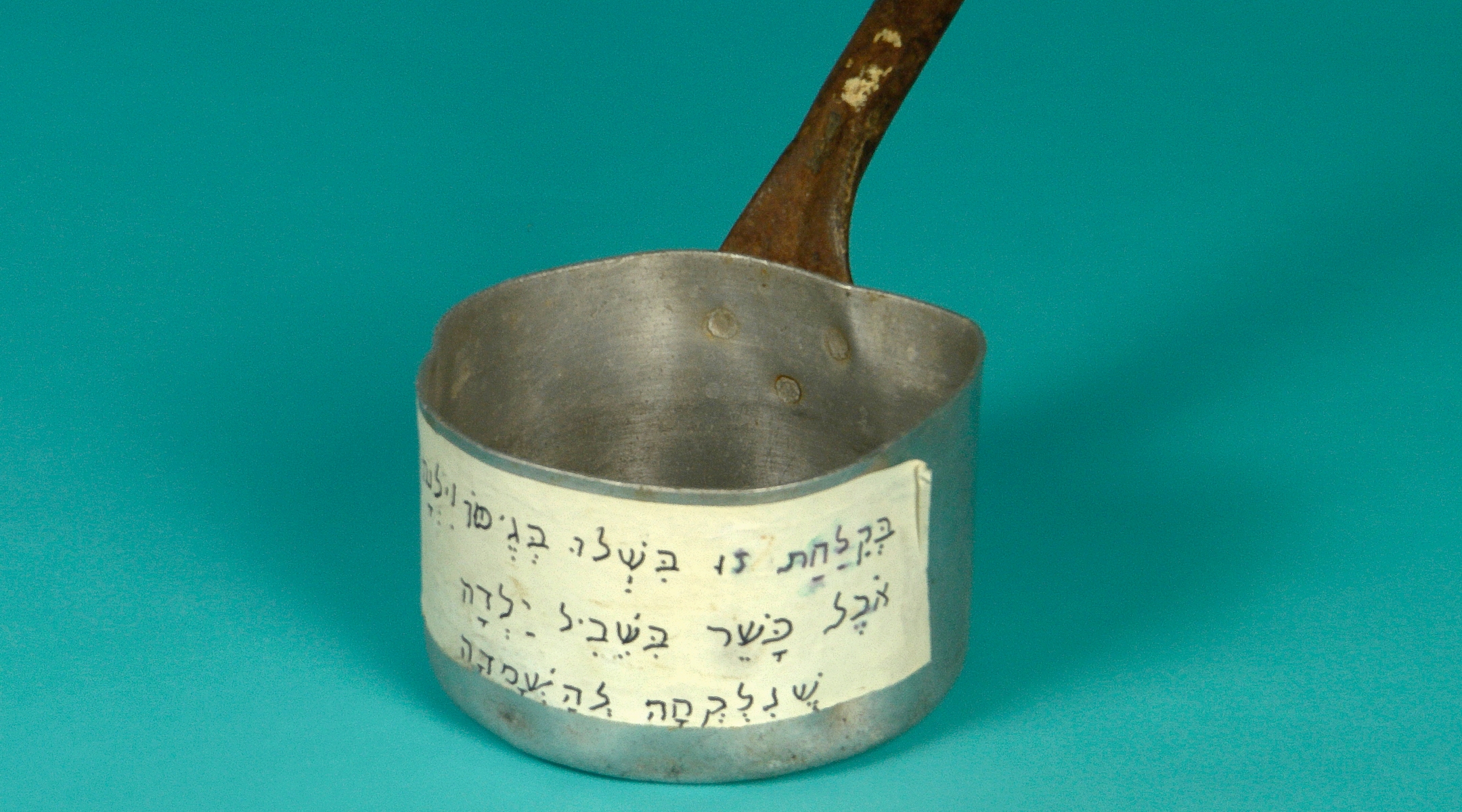 A pot belonging to the Farber family, confined to the Vilna Ghetto, whose daughter was abducted in a children’s action, one of the roundups periodically organized by the Nazis. It is inscribed in Hebrew: “In this pot kosher food was cooked in the Vilna ghetto for a girl who was taken to be annihilated.” (Museum of Jewish Heritage)

The goal of displaying these types of objects is to animate and intensify the narrative of the Holocaust with first-person stories, said Michael Berenbaum, a Holocaust scholar and advisor on the exhibit. “We believe in a story-telling museum,” he said, noting that the exhibit draws upon the full name and mission of the museum: “Museum of Jewish Heritage-A Living Memorial to the Holocaust.”

For survivor Toby Levy, who, as part of the museum’s Survivors Speakers Bureau, travels around the city sharing her story, the exhibit is a reminder to bear witness. Though she does not have any personal objects in the exhibit, Levy still commended its power in sharing Holocaust narratives.

Born into an Orthodox Jewish family in Poland in 1933, Levy and her family went into hiding in 1942, taken in by a non-Jewish friend. She and her eight family members remained in hiding until 1944, and in a displaced persons camp until 1949, when they were able to immigrate to the United States.

“Every time I talk about [my story], I relive it,” she said. “The museum has created this perfect exhibit in a time to teach.”

In order to develop a full narrative of the Holocaust, the exhibit first paints a picture of Europe’s thriving Jewish communities prior to the Nazi rise to power; “a vibrant, vital, living community that has no idea that their time is limited, that they are on the brink of destruction,” Berenbaum said.

In one section, the exhibit homes in on the month of April 1943, spotlighting  several narrative arcs: that month, Jews in the Warsaw Ghetto resisted their captors; Hitler and Nazi collaborators were busy implementing their “Final Solution” by building crematoria at Auschwitz; Americans and British authorities stood by with empty words and half-hearted actions at the Bermuda Conference.

To provide context for the Holocaust, the exhibit works hard to define who the Jewish people are — and how much culture and community was lost all around the world in the Holocaust’s wake, from Iran and Libya to Greece and Eastern Europe. 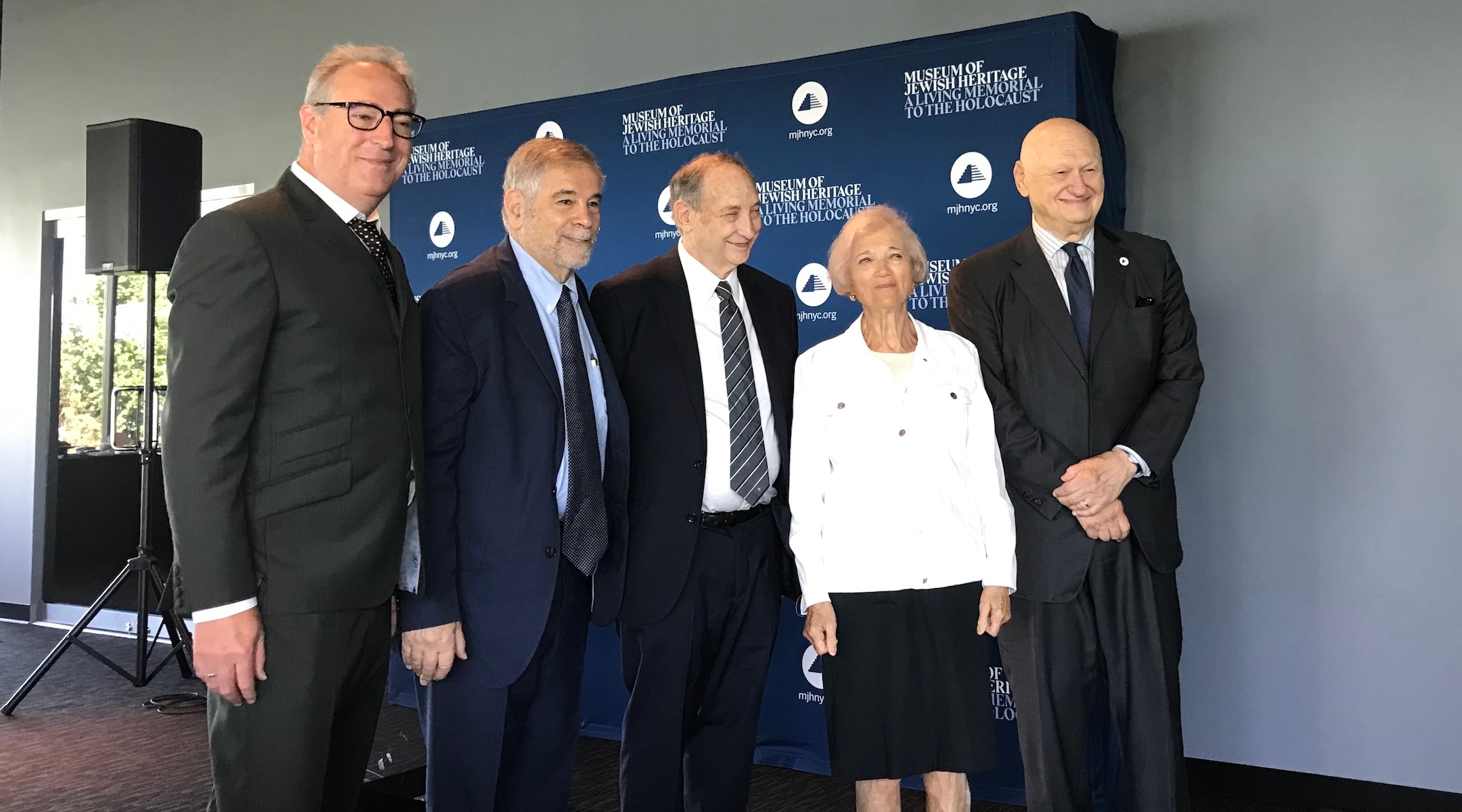 The exhibit’s title, “What Hate Can Do,” invites the viewer to consider the manifestations of hatred in today’s world, and how devastating the effects can be if they are not combated.

“What we have seen over the last five or six years is something that I, and all of us, thought we would never see again — whether it be war in Ukraine, whether it be refugee camps, whether it be mass murders or genocides, we always thought never again, and now we’re seeing it,” Bruce Ratner, the chairman of the museum’s board of trustees, said at a press conference previewing the exhibit. “Unfortunately the Holocaust is a yardstick against which all of today’s events are measured, but it makes the purpose of the museum to tell the story all the more important.”

“The remembrance of the past was meant to transform the future,” said Berenbaum. “Tragically, we live in a world in which this has taken on greater urgency — in our day, in our time, in the very months in which we were putting this exhibition together.”

The exhibit  is accompanied by a narrative audio guide available on the Bloomberg Connects app, which is available for free to remote listeners. Ticket information and visiting hours are available at the museum’s website.