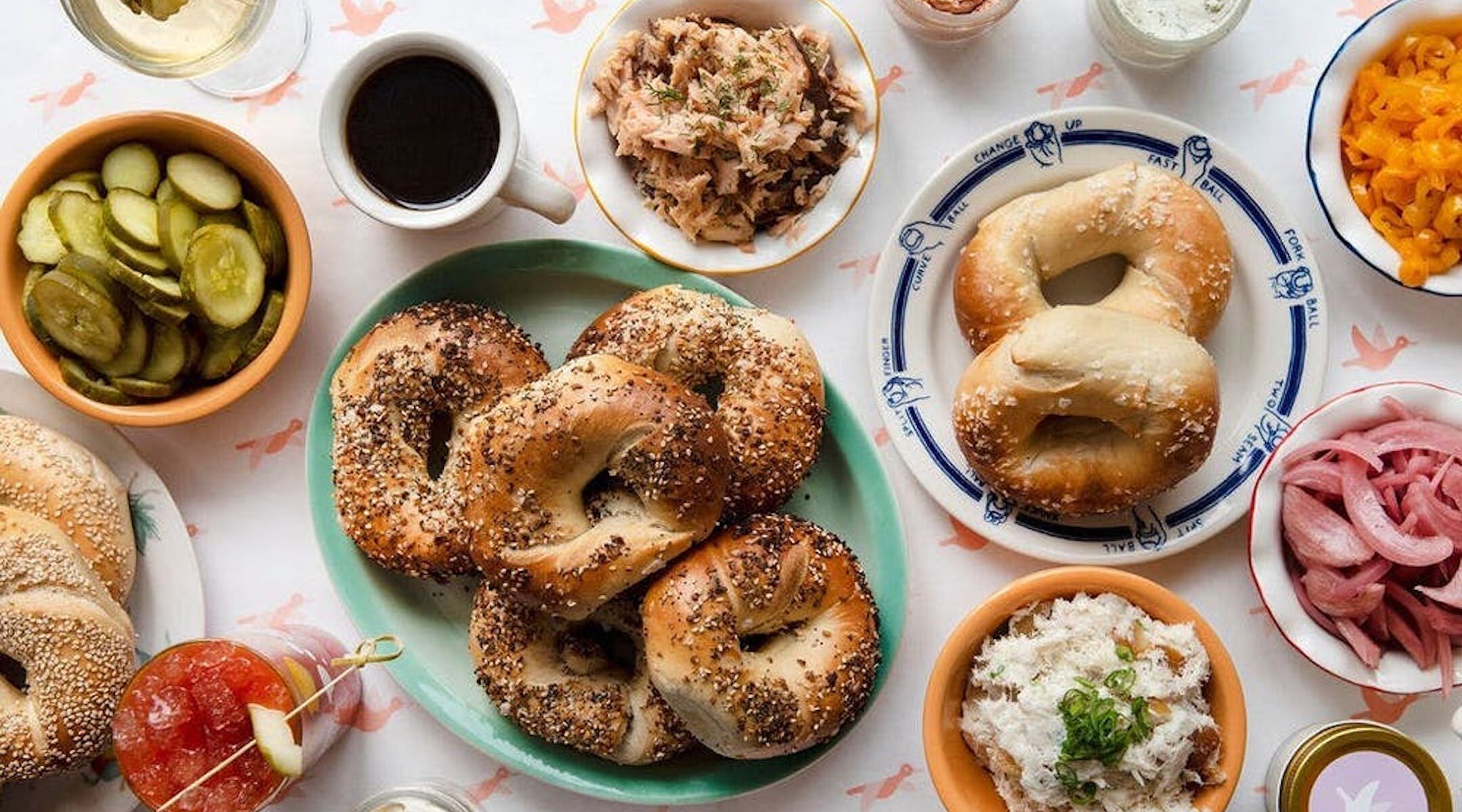 Modern bagel makers from all over Brooklyn will come together at "Down the Bagel Hole," hosted at Gertie in Williamsburg to talk about their methodologies and reveal tricks of the trade. (Nathan Zack)
Advertisement

(New York Jewish Week) — New Yorkers defend their favorite bagels and bagel shops the way some people defend their children. So do Montrealers, who hail from perhaps the only other city with a comparable bagel culture, according to Sari Kamin from the Museum of Food and Drink in Manhattan.

Whether to settle the argument or just to explore the differences, MOFAD is teaming up next week with the Museum of Jewish Montreal and The Neighborhood, the Brooklyn-based Jewish cultural group, in what could be the most bagel-centric event of the summer: Montreal and New York bagel makers will face off at Gertie, a hip Jewish restaurant in Williamsburg, for “Down the Bagel Hole: A Celebration of Jewish Breadways.”

For a $40 ticket, guests will be able to sample and learn about bagels and schmears from both cities while they sip on house-made cocktails inspired by Dr. Brown’s Cel-Ray soda.

Representing Montreal bagels — smaller than the New York standard and usually boiled with honey to achieve a sweeter chew — will be Noah Bernamoff from New York’s Black Seed Bagels chain, which bakes with “techniques borrowed from Montreal.”

Also present will be Melanie Frost, the chief operating officer of Manhattan’s Ess-a-Bagel; Elyssa Heller, the founder of Edith’s in Williamsburg, and Peter Shelsky of Shelsky’s, the Brooklyn deli and appetizing store.

It’s not a competition — bagelmakers inspired by both cities say they are excited to embrace their carb-loving cultures. The programming will allow them to talk with guests, and each other, in an informal but informational setting about their own processes and how they’ve developed the ultimate bagel recipe.

“The event is really just to explore the different bagels and talk about them and think about why they’re different, what the difference is, what they symbolize in terms of the food culture of Montreal and New York and really to celebrate both cities,” Kamin said.

Guests will enjoy samples of bagels and spreads from each bakery, while food experts from each city will explain the history and culture of their local bagels. Kamin will be joined by food historian and co-founder of The Wandering Chew Kat Romanow, who will bring with her samples from Montreal’s iconic bagel shops Fairmount Bagel and St-Viateur Bagel.

The event will be hosted by Liz Alpern, co-founder of the artisanal Jewish food company Gefilteria. She plans to dig into some of the current controversies in the bagel-making business with each of the chefs: To toast or not to toast? How much schmear is too much schmear? Honey or malt syrup in the boiling water?

“I’m just excited to be in the same room with so many people who love food and love talking about food,” Alpern said. “We’ll be able to go deep and zoom in on bagels and compare the methodologies from each of these bagelmakers.”

Alpern said that she doesn’t think bagels are necessarily a Jewish food, but she understands how strongly bagels have become a symbol of a Jewish identity for many. She is eager to explore that idea — how these bakeries are embracing their own Jewish identities through food — with her fellow foodies.

For Rachel Jackson, the co-owner of Gertie, billed as a “modern Jew-ish diner,” bagels and other Jewish foods mean celebration, community and family. That’s part of the reason she and her husband started the restaurant in 2019 and are excited to host events like “Down the Bagel Hole,” as well as other community-based events like a fundraiser for Ukrainian refugees in the winter.

The event is also part of The Neighborhood’s goal of becoming an urban cultural center for Jewish renewal. In the spring, The Neighborhood hosted food tours in different Brooklyn neighborhoods, and is planning to continue similar programming as they grow.

“We’re working to build a Jewish community and cultural center in Brooklyn,” said Guber. “In the meantime, we’re doing popup events that explore different neighborhoods, audiences and interests coming from non-denominational space where everyone is welcome.”