From Hanukah Lewinsky to Pink Pancake, these Jewish drag queens are celebrating their identities 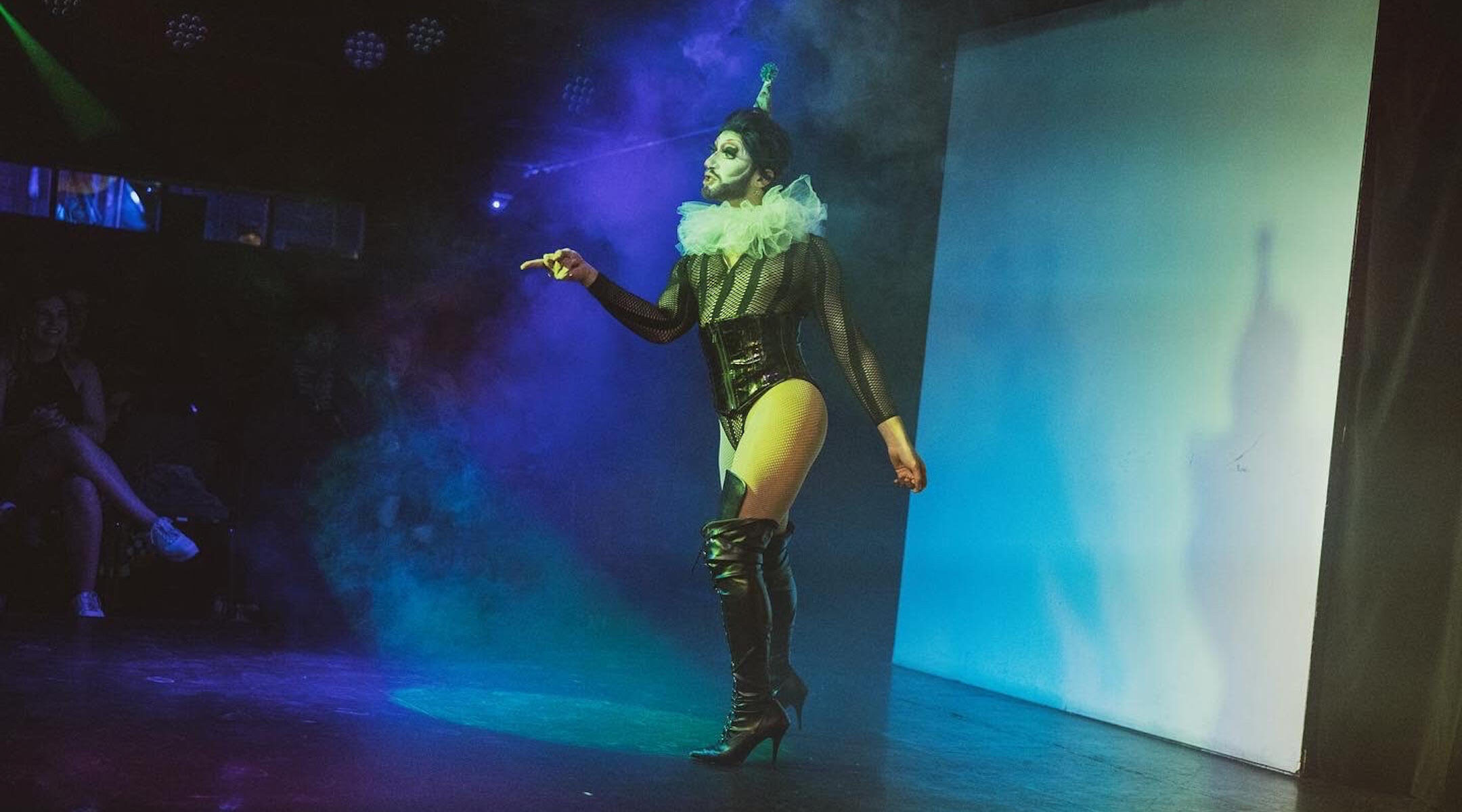 Pink Pancake will lipsync a portion of his Bar Mitzvah haftarah at the "Hanukkah in July" drag show. (Arin Sang-Urai)
Advertisement

(New York Jewish Week) – Back when Michael Witkes, 30, had his bar mitzvah, he described himself as a sweet, quiet and effeminate 13-year-old who was also severely bullied by his peers.

At his bar mitzvah party, the DJ played Pink’s “Get The Party Started” as Witkes entered the room — and the lyrics “I’m coming up,” were misheard by his classmates as “I’m coming out.” Assuming this was Witkes’ way of coming out as gay, the event led to even worse bullying that lasted throughout high school.

Memories of a day that should have evoked pride and celebration were marred by feelings of embarrassment and shame. While Witkes eventually came out as gay in college, he said he never had the opportunity able to heal the trauma and bullying he experienced at his bar mitzvah — until now.

These days, Witkes has a fully developed drag persona, Pink Pancake, who performs around New York City. So when Jayson Littman, the founder and director of Hebro, a gay Jewish nightlife events company, asked Witkes to be a part of an upcoming drag show featuring queens of Jewish experience — which Littman is calling “Hanukkah in July: A Spectacle of Jew’ish Drag” — the answer was an “absolute, 100% yes,” Witkes said.

“My Jewish identity in general is very important to me,” Witkes, who was raised Reform, told the New York Jewish Week. “After all that we’ve been through as a people, it’s really crucial to wear that with pride.”

The 100-minute show on Wednesday at Slate, a Flatiron nightclub, will feature seven drag queens of Jewish experience. They will all perform Jewish-related content, including remixes of classic Jewish songs from childhood and choreography to Israeli music.

As Pink Pancake, Witkes will lip-synch to his 13-year-old self chanting his haftarah portion — an audio recording that he’s held onto for the past 17 years. “This is an ode to my bar mitzvah and to all bar mitzvahs in general,” Witkes said. “It also will touch on this moment in my childhood where this wonderful, amazing event also had a lot of trauma behind it.”

The goal of “Hanukkah in July,” said Littman, as with all Hebro events, is to bring a celebration of Jewish identity into the queer spaces he occupies around the city.

“Because our crowd at Hebro really reaches out to a very secular gay Jewish community, I was interested to find drag talent who don’t necessarily identify as Jewish through their drag identity,” Littman told the New York Jewish Week. “Drag itself — it’s an exaggeration of gender roles for entertainment purposes. I was curious to see how they would take some miniscule connection to their Jewish identity and exaggerate that on stage through formative art for the audience.”

“I myself had reconciled my Judaism and my gayness, and I found that there were a lot of amazing gay Jewish groups in New York, but those groups were always about reconciling the two identities,” said Littman, 45, who grew up Orthodox in Washington Heights. “To me, I was fine being gay and I was fine being Jewish, and I wanted to celebrate the two identities, not just reconcile them.”

It took awhile for Littman to get there, he acknowledged. “I know when I came out, I really struggled to figure out what type of Jewish practice I wanted to do. There was a time that I decided ‘OK, I’m just gonna assimilate into the gay world and push Judaism to the side,’” he said. “But I realized when I came out of the closet, and put my Jewish identity in the closet, I would still be in the closet in some way.”

“What I felt would be most healthy for me was to embrace that Jewish part of me, even if I had to find a new way of being connected to Judaism,” he added.

For Littman, that meant infusing the gay spaces he loved in the city with a bit of Jewish culture and celebration, as well as finding queer spaces within Jewish communal events. In 2007, Littman wanted to find an alternative to the Matzo Ball, the infamous Jewish singles party on Christmas Eve, and so he organized his own Dec. 24 gathering at a local gay bar near his apartment.

The following year, Hebro was official, and more than 500 people showed up to now-shuttered Splash Nightclub in Chelsea for the “Christmas Eve Jewbilee.” In recent years, according to Hebro’s website, the Jewbilee, held at nightclubs around the city, has become a signature event and drawn more than 1,000 attendees.

Other events from Hebro mostly involve parties connected to Jewish holidays like Passover and Rosh Hashanah. But now, Littman says he is pivoting towards Jewish nightlife events that contain more structured programming and can be a bit more thought-provoking — but still fun.

Originally, Littman thought he’d organize a panel discussion with Jewish drag queens who’d speak about how their Jewish identity fits into their drag. But better yet, he realized, instead of telling the audience, why not show them?

On Wednesday evening, each queen will perform a song connecting to their Jewish expression, he said — and Littman emphasized the word “expression” rather than identity, in order to be inclusive of the spectrum of connection and observance each performer feels towards Judaism, he said.

In between performances, the queens will be interviewed by Shequida, a drag queen who is not Jewish but has performed in Israel and has had many Jewish experiences, Littman said. After the show, the event, which costs $23, will turn into a nightclub.

Hanukah Lewinsky, another performer in the show whose content tends to center on Jewish themes, said “it’s really amazing,” to be able to perform with so many other Jewish queens.

“[My Jewish identity] is inherently part of me,” said Lewinsky (non-drag name David), who will perform a song about learning to play dreidel and a song that celebrates being queer. “It’s an extension of myself out of drag … so why should it not be part of me in drag?”

In contrast, as a performer, Witkes, as Pink Pancake, has never focused on Jewish themes or expressions — although, as he explained, “Judaism is definitely part of my point of view,” in drag, and to be able reclaim his traumatic bar mitzvah experience as something empowering, is “so meaningful,” he said.

“I get to turn it into something joyful and celebrate that,” Witkes added. “As drag performers, if we’re able to bring people a smile and make them think just a little bit, I think that we’ve done our job.”