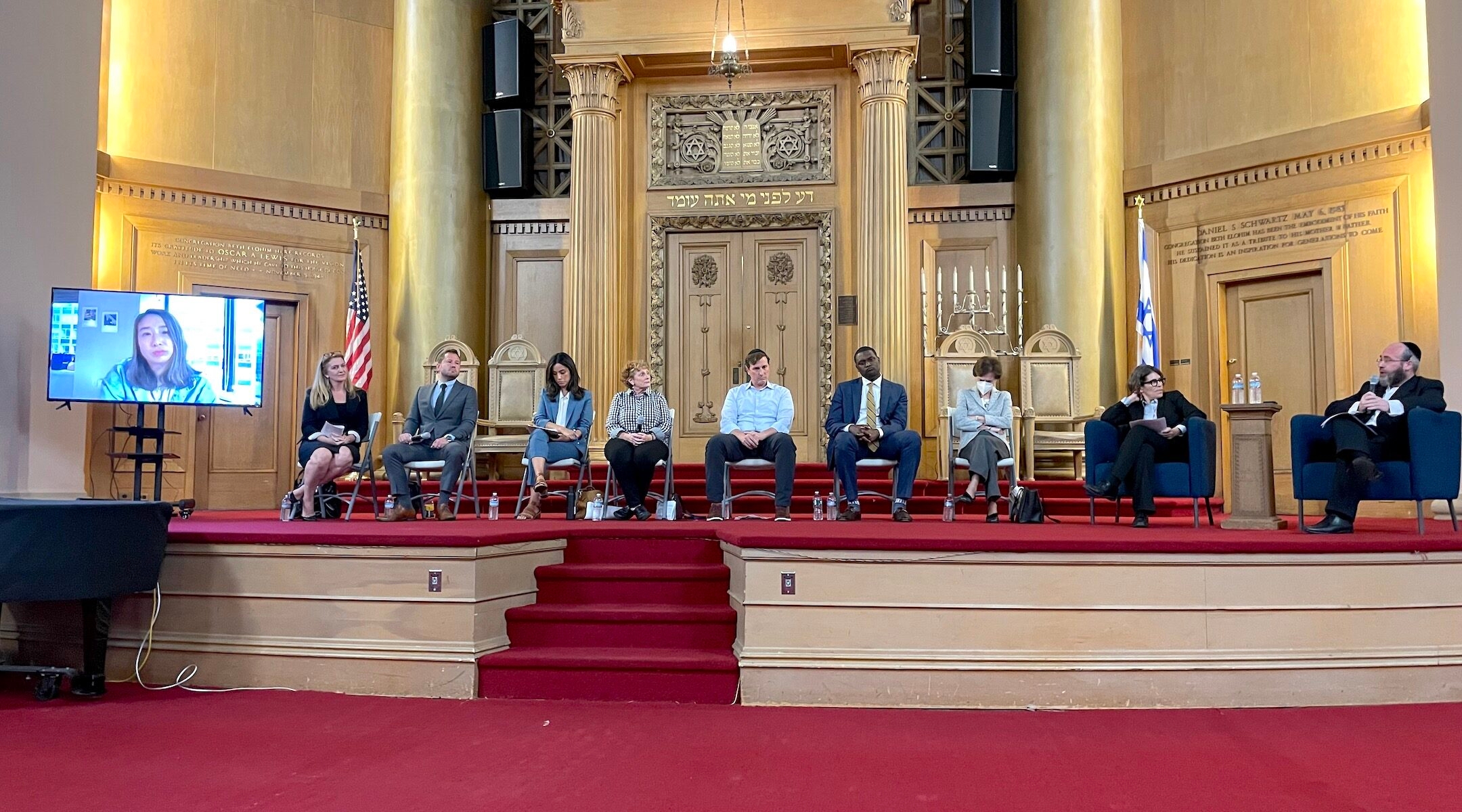 (New York Jewish Week) — A progressive seeking the Democratic nomination for the open seat in Congress in New York’s newly drawn District 10 doubled down on her defense of an Israel boycott during a candidates forum Tuesday night organized by Jewish groups.

“I support the BDS movement’s right to political speech,” State Assembly member Yuh-Line Niou said in response to a question put to the candidates by one of the moderators, Rabbi Rachel Timoner of Congregation Beth Elohim in Brooklyn. “This includes boycotts and economic pressure, which has been targeted by laws that undermine core First Amendment principles.”

Niou, who is endorsed by the Working Families Party and one of the frontrunners of the race, had previously told Jewish Insider that she supports the Boycott, Divestment and Sanctions movement — a statement that caused her to lose an endorsement from a fellow Assembly member.

Every other candidate at Tuesday night’s forum — held in-person at the Park Slope synagogue, with Niou appearing via Zoom due to COVID concerns — spoke about supporting Israel and opposing the BDS movement. For many in the mainstream Jewish community, including many left-leaning groups, the Israel boycott is a red-line issue.

In her question to Niou and the other candidates, Timoner, who is also co-founder of New York Jewish Agenda, a Jewish progressive political group, said: “Many people are not aware that the BDS movement’s purpose is not only to apply pressure on Israel to end the occupation of the West Bank, but to seek the elimination of Israel as a Jewish state.”

The forum was hosted by NYJA and the Jewish Community Relations Council of New York as well as the Forward newspaper. District 10, which stretches from Lower Manhattan to Brooklyn, includes a significant Jewish constituency, including liberal Park Slope and haredi Orthodox Borough Park.

In his response to the question, U.S. Rep. Mondaire Jones, a Hudson Valley House member running in the district, said that he supports the safety and security of Israel, but disagrees “with a number of actions taken by the Israeli government.”

“Both of those things can be true,” Jones said.

Former House member Elizabeth Holtzman, who at age 80 is trying to stage a political comeback, spoke about remembering the day Israel was created. “This kind of dates me,” Holtzman said. “My grandmother set me and my twin brother down, turned on the radio and said: ‘I never want you to forget this day, as long as you live.’”

In her response, Niou added that while she does “not support calls to oppose the BDS movement,” she does “not always agree with every single statement that’s made, or all of its demands.”

NY 10 congressional candidate @yuhline reaffirms her support for the BDS movement against Israel at the @CBEBK forum in Park Slope, Brooklyn. pic.twitter.com/uj6VNwqgnW

Niou also brought up Rachel Corrie, who was crushed to death by an Israeli military bulldozer while protesting for Palestinian rights in 2003, as another reason for supporting BDS. An Israeli army investigation following Corrie’s death found that the driver did not intentionally run over the activist and that she had been involved in illegal and dangerous behavior, which her supporters deny.

“She was my classmate and my friend,” said Niou, who attended Evergreen College in Washington State with Corrie. “She was part of a movement and that movement deserves the right to be heard.”

Niou also said that she has not personally participated in the BDS movement, but thinks “it’s a movement that needs to be heard.”

“I believe that our tax dollars should never be used to violate human rights,” she added.

The candidates also fielded questions about responding to a rise in antisemitic crime and standing up to conservatives.

Goldman, who is Jewish and served as lead majority counsel in the first  impeachment of Donald Trump, linked the rise of antisemitism to the former president, calling him the inspiration for rising hate crimes in this country.  “One thing that we cannot allow to happen is for him to become president again in 2024,” he said.

Timoner also asked a question about where candidates stood on religious “liberty,” which conservatives have invoked to advocate for exemptions from vaccine mandates and wide latitude for private schools, including yeshivas, to set their own curriculums.

All candidates offered their support for yeshivas, while advocating for uniform standards for teaching secular subjects in the religious schools.

Jones noted that he supports the state’s “substantial equivalency requirements” for teaching secular subjects in New York schools, but said “we can do that while also continuing to support yeshivas.”

“I’m also proud to be someone that wants to have a pluralistic society, where people of various faiths are allowed to choose their own destinies,” Jones said.

Holtzman said she is opposed to tuition tax credits — essentially, tax breaks for private educational spending — adding that “we have to make our public schools work.”

“Democracy cannot work unless people are educated,” Holtzman said. “That’s something I think we’ve learned in this past year or so with the extreme right wing.”

A City & State New York poll from last week showed that Rivera was in the lead with 17% of the vote, and Niou was in second with 14%. Goldman, who was the lead lawyer in the first impeachment of former President Donald Trump, is polling third with 12% of the vote.

Holtzman, who is also Jewish, is polling at 9%. Holtzman served in Congress from 1973 to 1981, where she led efforts to bring Nazi fugitives to justice.

Jones, who opted to run in the 10th after his own upstate district was redrawn, is still in the fight, polling at 7%, and has a $3 million war chest, according to City & State New York.

The Democratic primary will take place on Aug. 23.