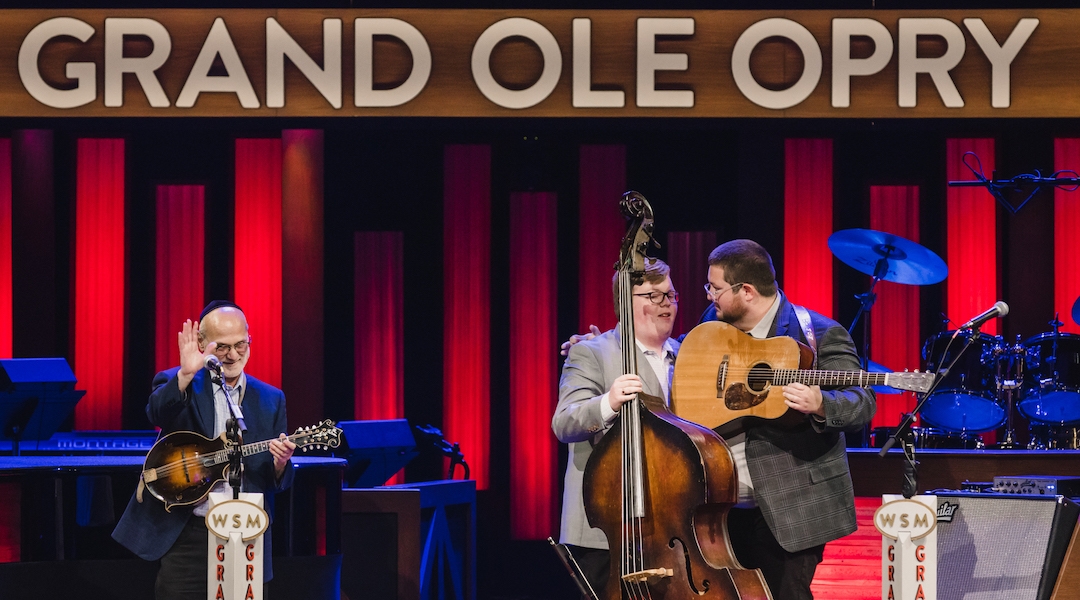 At age 71, Andy Statman, left, made his Grand Ole Opry debut along with the Eddy brothers, Carter and Jake, June 22, 2022. (Shelly Swanger)
Advertisement

(New York Jewish Week) — In January a young bluegrass guitar player in Appalachia emailed Andy Statman out of the blue, expressing admiration for the work of the 71-year-old Brooklyn klezmer musician. Neither of them had any idea at the time that the email would lead to a recording project, a performance tour and Statman’s debut at the Grand Ole Opry in Nashville in late June.

How an Orthodox Jewish maestro, whose regular gigs long included monthly performances at the Charles Street Synagogue in the West Village, brought the temple of country music to its feet, is a story of musical appreciation that knows no boundaries.

Statman, a clarinetist and mandolin virtuoso known both for his bluegrass and Jewish music, lives in the Midwood section of Brooklyn. In addition to his own solo work in both genres, he has performed with Itzhak Perlman, Bela Fleck, Ricky Skaggs and Paul Schaffer. Work dried up during the pandemic, however, and Statman himself came down with COVID-19 in March 2020.

Almost two years later, Jake Eddy of Parkersburg, West Virginia, wrote in his email that he and Statman were kindred musical spirits — something Statman eventually came to believe.

After receiving the email, Statman checked out the 22-year-old guitarist on YouTube, and discovered that Eddy has been the guitarist in the Becky Buller Band, a major bluegrass act. A few days later Statman called him on the phone. By the end of their phone chat, plans were made for Eddy, his bass-playing kid brother, Carter, and a banjo player named Ned Luberecki to come to Brooklyn and record an album with Statman.

“It was one phone call,” Eddy recalled with a laugh.

In February, three weeks after the initial email, the three musicians were in Brooklyn, playing together for the first time at Statman’s home. The next day they recorded an album at Conveyor Studios in Bushwick.

“When the record button was pushed, we had played together maybe a total of two hours,” recalled Eddy.

The result is “Nor’ Easter” from Wondertone Records, which is available as a CD, digital download and vinyl record.

They took April off because of Passover, when Statman wanted to be with his family. In late May the tour continued in New England, a day after 18-year-old Carter Eddy graduated from high school. 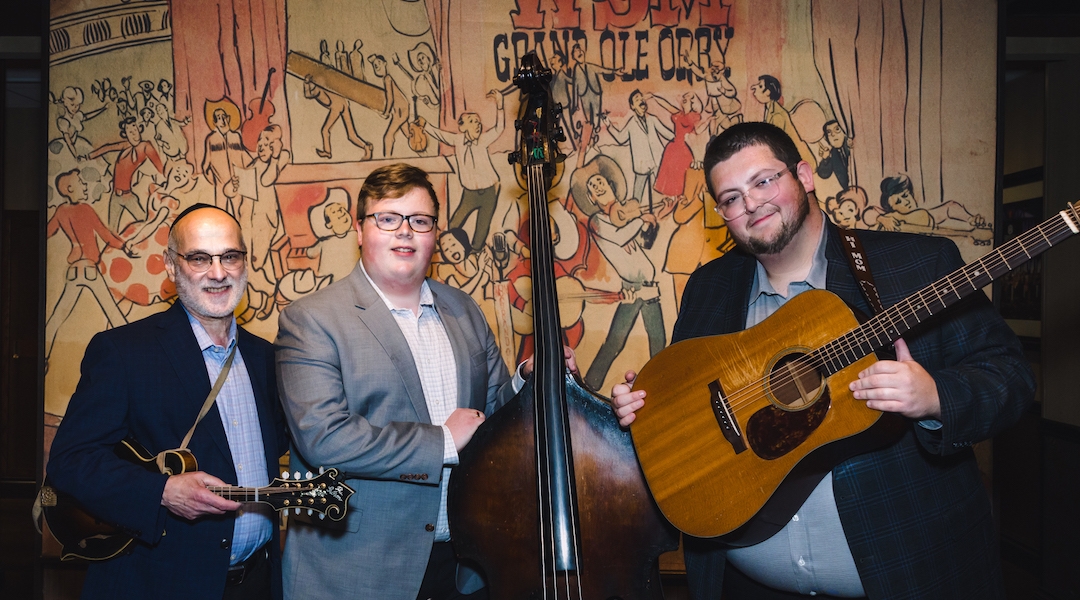 During a stop at Club Passim in Cambridge, Massachusetts, Jake noticed Statman credited on a couple of David Bromberg albums displayed in a bathroom. It turns out that the Eddy brothers, too, have a connection to one of the heavyweights in American roots music: Their grandfather played with the late Melvin Goins, who was part of the Lonesome Pine Fiddlers, one of the “first generation” bluegrass bands.

While on the road, the Eddy brothers also learned to adapt to the restrictions of an observant Jew. They soon knew that Statman needs to be home for Shabbat and what kind of restaurants he’d be willing to dine at. “All those things are new to us but we’re figuring it out,” said Eddy.

Eddy has played the Grand Ole Opry twice with Buller’s band. He’s reluctant to take credit for it but he was the one who alerted the Opry’s booking agent that Statman had never performed at the storied music venue. As a result Eddy, his brother and Statman were invited to come play on June 22.

Statman stopped playing bluegrass festivals in 1976. So he was a bit surprised upon arriving at the Opry that musicians young and old introduced themselves and asked to be photographed with him.

“They actually knew who I was and what I did,” Statman told New York Jewish Week.

His encounters that night continued to overwhelm him. Statman rehearsed in the special dressing room reserved for artists who are having their Grand Ole Opry debut. The room has photos of performers, everyone from Roy Acuff to Taylor Swift, at their debuts and quotes of what those appearances meant to them. 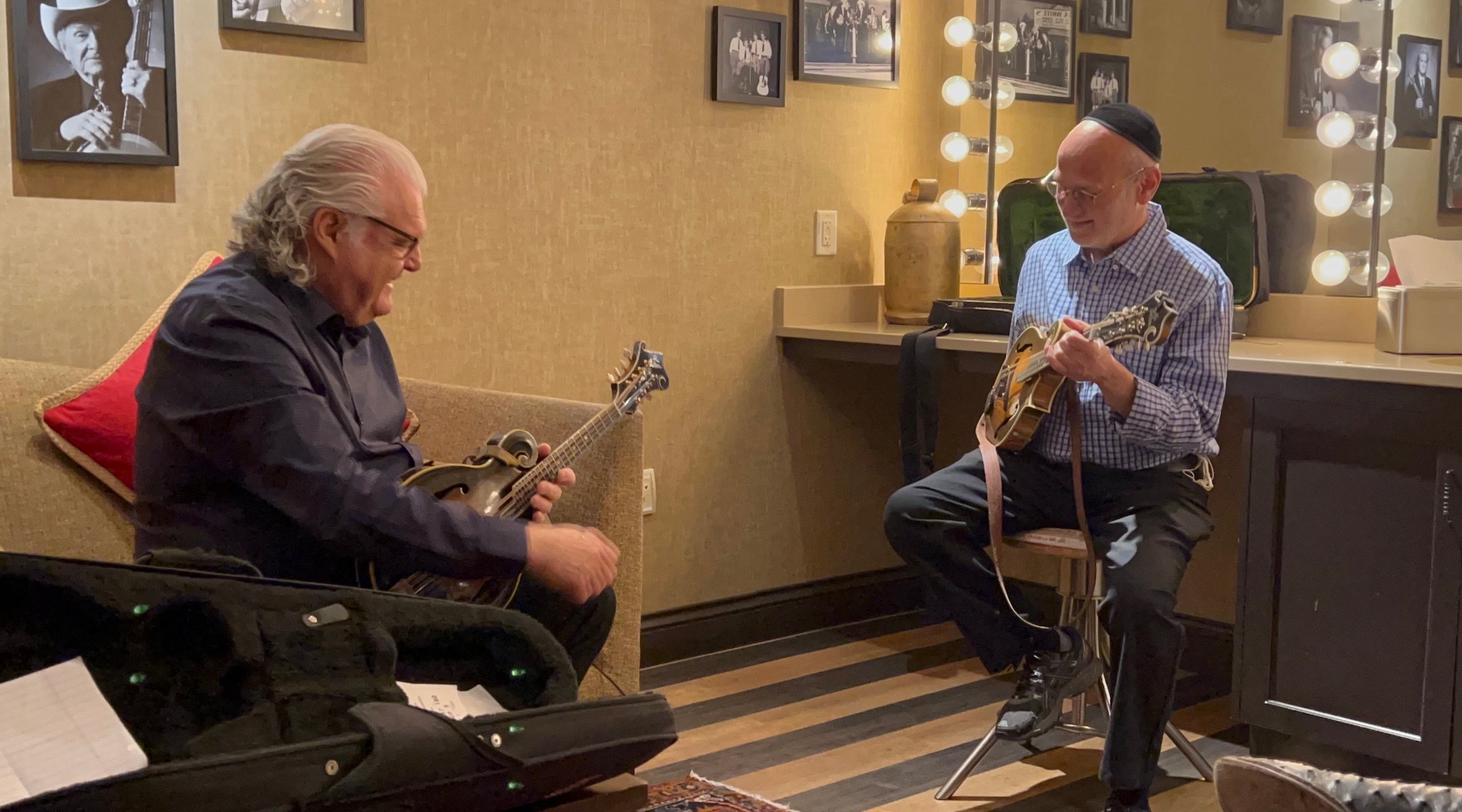 It was in the dressing room that the manager of the Quebe Sisters, a Dallas-based western swing group, handed Statman a substantial royalty check covering eight years for the fiddling trio’s recording of Statman’s “Flatbush Waltz.”

Also in the dressing room was Skaggs, the multiple Grammy-winning bluegrass artist who has collaborated with Statman over the years. The night before, Statman attended a Skaggs performance at the Opry and dined with him afterwards at a kosher Indian restaurant in Nashville. The night of Statman’s debut at the Opry, Skaggs introduced him, saying, “He’s just one of the greatest musicians I’ve ever known. I love this man and I love his music.”

Statman and the Eddy brothers took to the stage, Statman with a black yarmulke on his head, Jake Eddy with the words “HI MOM” etched into his guitar strap. The trio played the traditional Grand Ole Opry three-song set, beginning with an improvised fiddle tune. The second number was “Flatbush Waltz,” which at one point was played in what Statman referred to as “a whisper.” The trio concluded its set with “Surfing Slivovitz,” a fast-paced instrumental from Statman’s 2013 “String Theory” album. The Grand Ole Opry audience responded with a standing ovation.

A few weeks later Statman would describe that audience as “unlike any other” he has played for before.

When Statman was a teenager growing up in Jackson Heights, Queens he put up pictures on the wall of his bedroom showing famous country music artists performing at the Opry, always standing in front of the microphone stands with the logos of the Opry and station WSM, which has broadcast the country music radio show for 97 years.

“Here I am all these years later actually playing into one of those microphones,” Statman marveled.

“Andy has worked tirelessly for this music,” said Jake Eddy. “Andy didn’t need the Opry to be successful in his career but it certainly is a great exclamation point on all the other great stuff he’s accomplished.” Eddy plans to do more recording and touring with Statman.

After the set at the Grand Ole Opry, announcer Charlie Mattos told Statman: “Let’s do this sometime again in the future.” To which Statman replied, “God willing.”