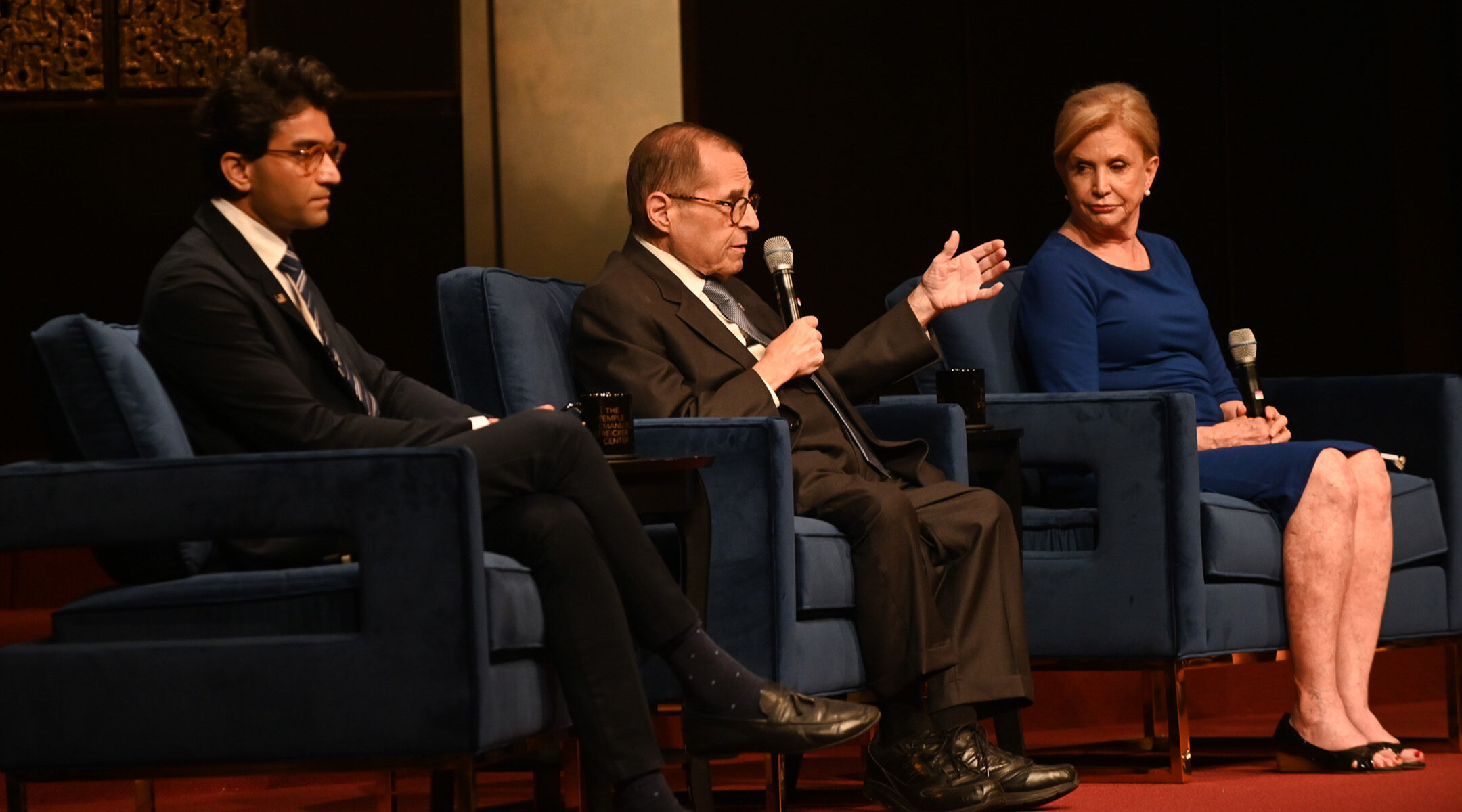 Lawyer and former Obama staffer Suraj Patel, Rep. Jerry Nadler and Rep. Carolyn Maloney faced off during a debate over who would represent New York's District 12 in Congress at The Temple Emanu-El Streicker Center on Wednesday, Aug. 10, 2022. (Gili Getz)
Advertisement

(New York Jewish Week) — Running hard as the “last Jewish congressman from New York,” Rep. Jerry Nadler explained why he thinks that is important at a candidates debate held Wednesday at the Temple Emanu-El Streicker Center.

“It matters because of the rising antisemitism in the country,” Nadler said in reply to a question from moderator Jodi Rudoren, the editor in chief of the Forward. “I have the ability to work with progressives, [have] the ability and shown the ability, and the resources, the willingness to use the resources to prevent BDS from getting a foothold on the left.”

Wednesday’s debate, sponsored by the Forward, the New York Jewish Agenda and the Jewish Community Relations Council of New York, featured appearances by Nadler and his two rivals for the Democratic nomination in District 12: Rep. Carolyn Maloney and attorney Suraj Patel. The House landscape was upended when redistricting combined Nadler’s Upper West Side district with Maloney’s Upper East Side district, forcing a bitter clash between the two longtime incumbents with similar political messages.

Hours before the forum, Nadler had tweeted and emailed a fundraising pitch highlighting that he is the sole Jewish member of New York City’s Congressional delegation, a distinction noted in a New York Times article in June that he also quoted.

Asked a similar question about ethnic representation in a district with a large Jewish population, Patel pointed out that if he were to be elected, he would be the “first South Asian member of Congress elected anywhere east of the Mississippi River.”

He added that his family’s story is similar to that of Jewish immigrants who left Eastern Europe and arrived in New York City. “That is what I’m talking about when I say that representation does matter,” Patel said. “It’s about the values that we share.” 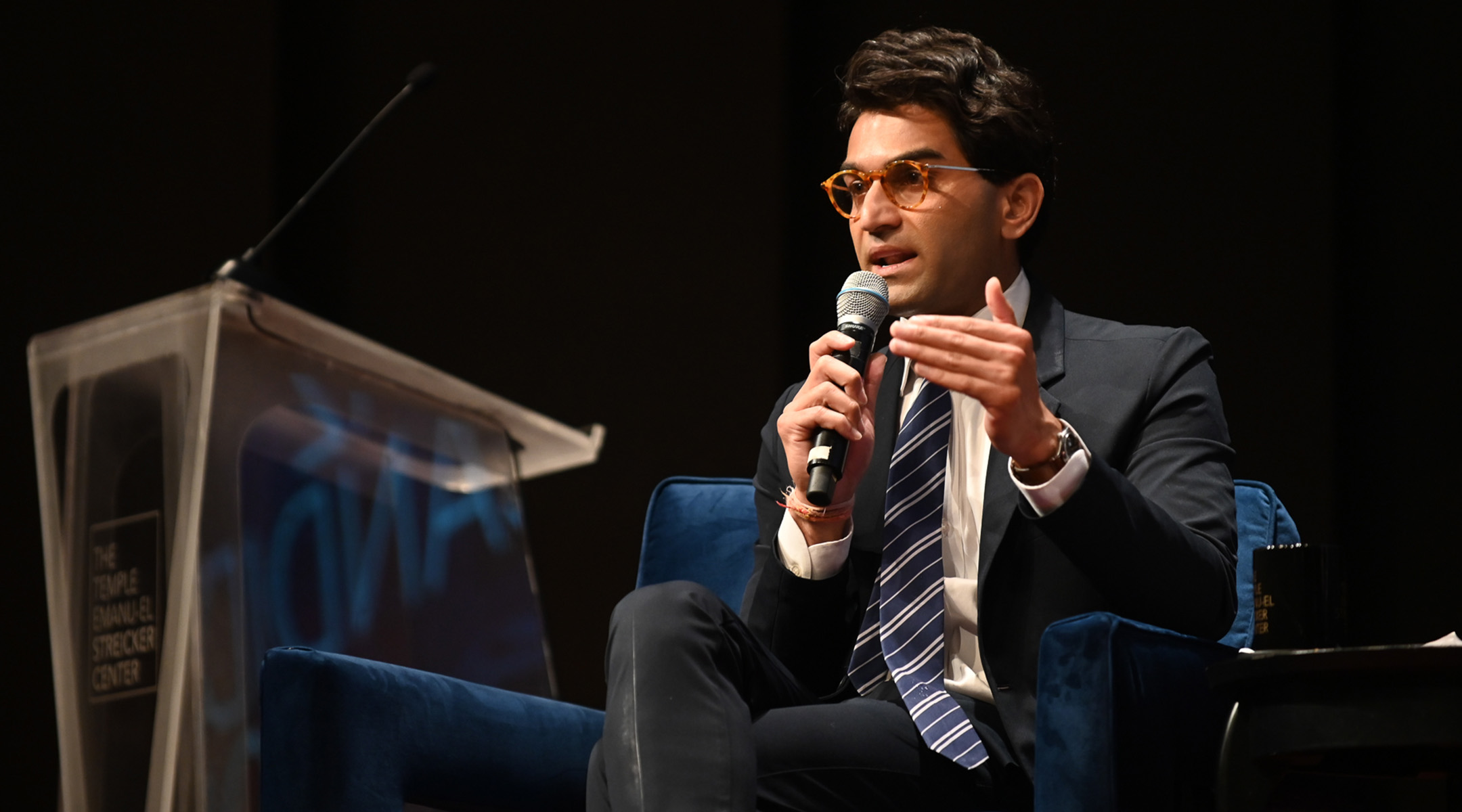 When it was Maloney’s turn to answer the question, she appeared to throw shade at Nadler by praising another Jewish lawmaker from New York. “We’re very fortunate to have Sen. Schumer, the leader of our Senate,” Maloney said. “He’s a fabulous guy.”

All three candidates were asked about the influence of the American Israel Public Affairs Committee, the pro-Israel lobby. AIPAC has been scrutinized in recent months, particularly on the left, for supporting Republican candidates who voted against certifying Joe Biden as president, and for spending heavily on a candidate who ousted progressive Jewish incumbent Andy Levin in Michigan’s 11th Congressional District.

Replying to a question from Rudoren about what they think of AIPAC’s strategy and if they consider themselves aligned with the organization’s approach to Israel, Maloney answered, “I haven’t seen those millions of dollars they’re spending,” but quickly pivoted to attack Patel on the importance of electing “good people to office.”

Nadler said that the problem is not AIPAC, but the Citizens United Supreme Court case, which he has previously criticized for opening the floodgates to political campaign contributions by special interests.

“With respect to their supporting insurrectionists, I disagree with that,” Nadler said, referring to AIPAC’s support for 37 Republicans who would not certify Biden.

Patel warned that if young Democrats “who want to support the U.S.-Israel relationship” are not elected, then Israel will become a partisan issue when it has historically been a bipartisan issue.

“It is telling that you have not seen a flood of outside money from AIPAC into this district,” Patel said, suggesting all three candidates had strong pro-Israel credentials. “Let’s not pretend that somehow one of us on this stage is not a stalwart ally of Israel.”

Nadler touted his record against BDS, saying he’s been fighting it “since it first reared its ugly head.” Maloney called the movement “BS.”

Patel spoke about how he publicly opposed BDS when he was a student at Stanford in 2004, during a time when it was “not very popular to do so.”

“I am incredibly concerned that the next generation of Democrats are veering away from the stalwart support of the Jewish state of Israel and its right to exist,” Patel. “We need messengers who can speak to that generation and ensure it doesn’t drift away for good.”

In a tense moment during the debate Maloney was asked about her record on vaccines. Earlier this week, in an interview with a Gotham Gazette reporter, she said she “regretted” introducing legislation years ago to study the health effects of vaccines.

Maloney seemed flustered that the question continued to be brought up, saying: “You can go through anybody’s record and find them asking a question.”

While Maloney spoke loudly over the moderator who said she exceeded her allotted time, Nadler took this as an opening to attack his decades-long colleague, calling modern anti-vaccine ideology a “poison that she helped plant.”

“She introduced nine bills against vaccines,” Nadler said. “She tried to take $80 million away from the CDC. And we are seeing the bitter results now.”

“That is not true,” Maloney replied. “It’s a cheap attack.”

After watching the two squabble, Patel calmly answered, “I wasn’t going to bring up vaccines here at a forum about the Jewish community in New York.”

At one point, Maloney showed a hint of sadness over what had happened with the redistricting, which pitted her and Nadler against each other. “I think the Republicans loved taking two powerful friends and chairmen and putting them in the same district,” Maloney said.  “It is very damaging to our state, and I regret it.”

In a new poll released on Tuesday, Maloney and Nadler are neck-and-neck with Patel gaining on them. Nadler is in the lead with 29%, Maloney has 27% and Patel has 20%.  Meanwhile, 19% remain undecided.