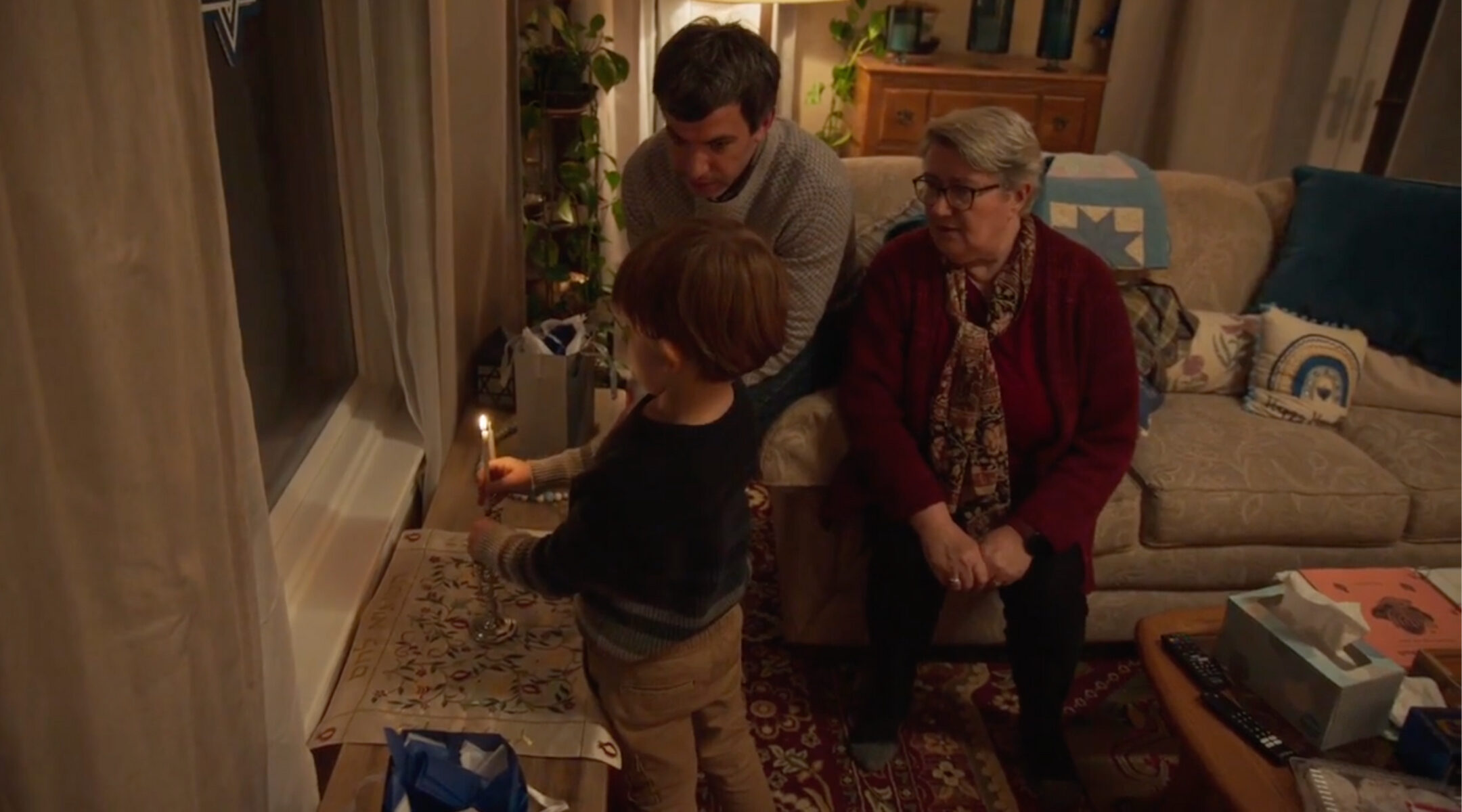 Miriam Eskenasy, a cantor and Portland-based Hebrew and b'nei mitzvah tutor, was one of the new characters introduced in this week's episode of HBO's "The Rehearsal". (Screenshot)
Advertisement

(JTA) — Miriam Eskenasy didn’t know exactly what she was signing up for when she applied to tutor Hebrew on “The Rehearsal,” Jewish comedian Nathan Fielder’s reality-bending HBO show in which (ostensibly) real people practice for uncomfortable situations.

But the Portland, Oregon, cantor believed she would be prepared for whatever was thrown her way. After all, she’s taught Hebrew school during every phase of her career, from the time she was a student cantor in the early 2000s until now, as a self-employed Hebrew and b’nei mitzvah teacher.

But Eskenasy had never before encountered a family held together only by the premise that they were simulating family life, with a fast-growing child actor son, to see whether they wanted to embark upon it for real. In the season’s fifth episode, Fielder and his rehearsal-partner co-parent Angela fight over whether their son Adam should be exposed to Fielder’s Judaism or only Angela’s Christianity, which is central to her identity.

When they can’t come to terms, Fielder enlists Eskenasy to give Adam clandestine lessons about Judaism — ones that echoed the secretive lessons Eskenasky herself received as a Jew preparing to move to Israel from Communist Romania. Ultimately, tensions between Fielder and Angela boil over after Fielder invites Eskenasy to the house they are temporarily sharing.

Eskanasy, who moved to the United States at 16 from Israel, is bound by a non-disclosure agreement not to talk about what happened during the filming and hadn’t seen the full episode before it aired. But she told the Jewish Telegraphic Agency that she knows her personality could potentially steal any scene — as she does when she accuses Angela of antisemitism.

We spoke with Eskenasy about her childhood in Romania, her own experiences with antisemitism and what she gets out of working with interfaith families that are, well, real.

This conversation has been lightly edited for length and clarity.

JTA: The most important question: Are you caught up on “The Rehearsal”? And are you going to watch yourself?

Eskenasy: I’ve been watching the episodes weekly — I don’t know if to tell my friends to tune in to the next episode or not because, oh, my God, it was like — I said so much! And I don’t know what he put in and what he left out.

The episode deals with the challenges of raising a child in an interfaith household. What is your experience like working with families like that?

Today in America, Judaism is all about mixed marriages. I have done a lot of interfaith weddings, and that was my premise, that they were willing to have a Jewish home. When I was working at KAM Isaiah Israel Synagogue in Chicago, interfaith couples had to sign up for a 10-session study with me, the introduction to Judaism classes and what have you. So they don’t have to convert, but they have to understand what Judaism is before they get married.

I would say more than half of the kids that I’ve worked with come from interfaith families. My grandson is half not Jewish. But on the other hand, what I’m finding out is that, most often than not, it’s the non-Jewish parent who makes the commitment to raise the Jewish child, and takes the kid to the bar mitzvah lessons, is invested in learning Hebrew or asking questions about stuff or being interested — whether they convert or not. They have a much less complicated view of Judaism.

We, as Jews, I think, have a very complex relationship with our religion. 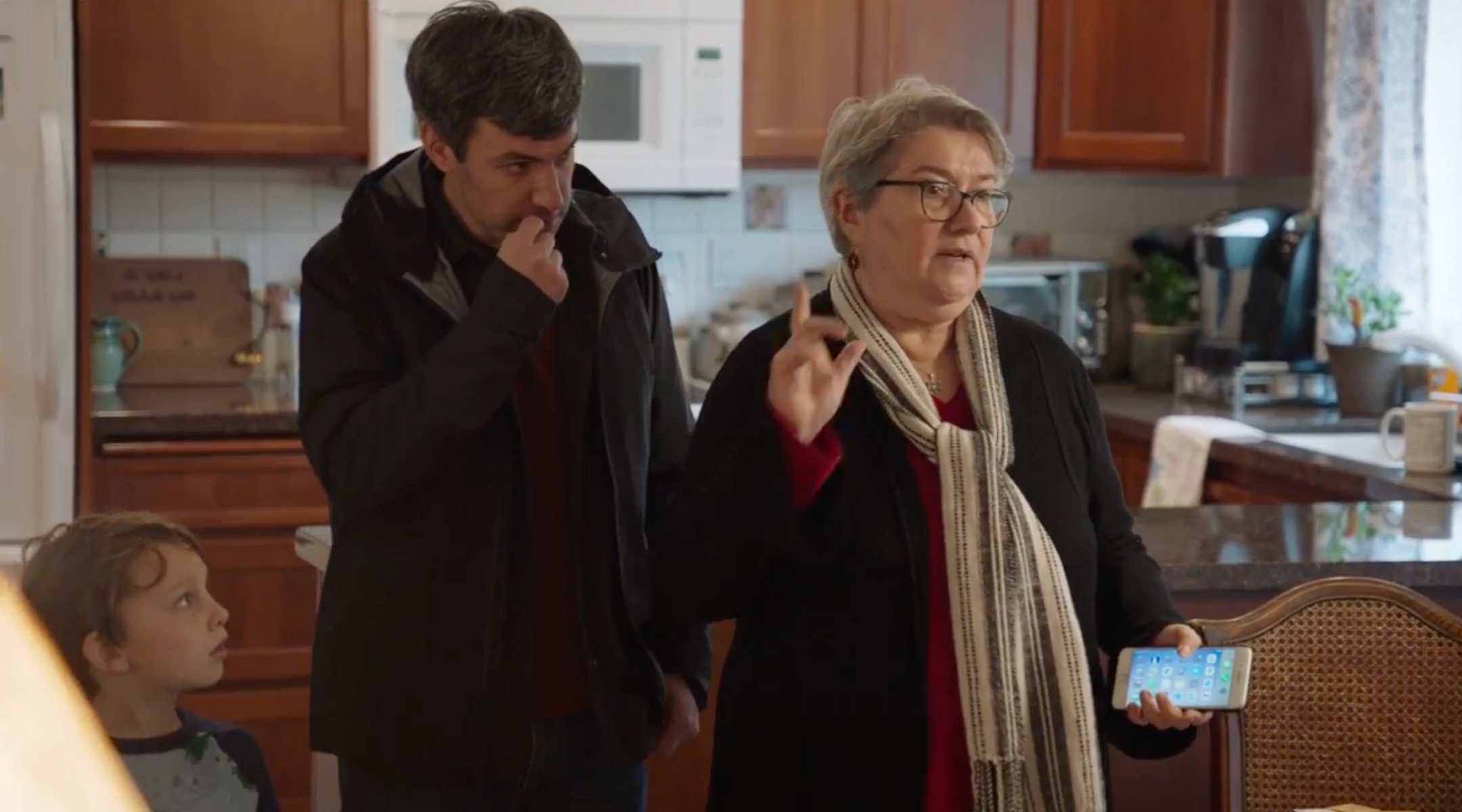 Miriam decides to take matters into her own hands and talk to Angela about Judaism. (Screenshot)

You were born in Bucharest, Romania, and lived there before moving to Israel and eventually, the United States. What was it like to be Jewish in Romania in the 1950s?

I was 10 years old when I left Romania. There were kids who would call me “dirty Jew” or something like that — kids that I thought were my friends.

On Passover, my mother would go to the outskirts of Bucharest and find a box of matzah to show me what it was, that Jews eat this kind of stuff on this day.

My mother sent me to a cheder [lessons for Jewish children] once my parents applied to go to Israel. That was a really scary experience. It was this rickety stairway in somebody’s attic and some old guy was teaching us the aleph bet. And there were two kids, me and the one other Jewish kid from my class. And then that kid got the papers to go to Israel. So the next year, I didn’t want to go by myself. So after one year, I learned nothing. The aleph-bet, then nothing. This is what I grew up with, as a kid.

Your family was among the many Romanian Jews to emigrate to Israel during the Communist era. What was that like?

We had other relatives who would get their papers to go to Israel. [Romania was the only Communist country to maintain uninterrupted relations with Israel, and emigration was possible and even encouraged by Communist leaders as a way to reduce the Jewish population. But Zionism was prohibited and Zionist leaders were imprisoned during Eskenasky’s childhood.] My parents’ friends from their hometown would come the night before they had to leave to stay with us. And so my parents would make this big spread, a meal and a farewell going-away party. And at the end of all these things, they would get up — and I have distinct memories of this — close all the windows, pull all the curtains and they would stand up and sing the “Hatikvah” [Israel’s national anthem]. It was all very hush-hush.

You spoke passionately on the show about opposing antisemitism. What experiences with antisemitism, if any, have you had since you came to the United States?

In the 40 years I lived in New York, I lived in Jackson Heights, Queens. Jackson Heights has a lot of landmark apartments that were built in the 1920s. Those developments were notoriously antisemitic. Not just antisemitic, but if you were not Italian or Irish you basically couldn’t get into those. I was the first person in my building to have a mezuzah on the door. There were two apartments per floor, and my neighbor got very upset one time when I took down some plastic green Christmas wrappings around the railing, which I thought were a hazard, aside from being ugly. She wrote me a note to take down my “mizah,” because it was offensive to her. That was the extent of my antisemitic experiences.

After becoming a cantor in 2002, you worked in synagogues in New York and the Midwest. How did you end up in Portland and what has been your experience there?

I have lived for the past 20 years in a Jewish environment only, working in synagogues and hanging out with only Jewish people and singing Jewish music. When I moved here in 2019 to be close to my daughter, I did not move to the Jewish neighborhood. This is a working-class neighborhood. It’s up and coming but there are no Jewish delis here, let me put it that way.

That’s why I didn’t put my mezuzah up right away — because you read about all this antisemitism. I grew up with it as a kid and even in New York, so I don’t want to be exposed to that.

It was an adjustment until my next-door neighbor texted me one evening to ask me if what I was cooking was latkes on Hanukkah one night, the first Hanukkah that I was here, and that he had to come over and have some. So then I felt a little easier about being accepted here for who I am, what I am.

You encounter some shocking moments during your tutoring on “The Rehearsal.” What have been some of the most surprising or funny moments you’ve encountered in your work previously?

In this one synagogue in Cherry Hill, New Jersey, I had this one kid who never, ever practiced. And I would ask her, ‘How come you didn’t practice this week?” And one time, she said, “I put my Torah portion on the floor, and the dog barfed on it. And so I couldn’t practice this week.” I tell this to all the kids and they crack up.

What do you like most about teaching children about Judaism?

When I was a student cantor at East End Temple [in New York City], we had this very philosophical discussion about God. And I had this one student, very bright. She thought that God was an alien, who lived on another planet and was controlling life on earth like a puppeteer.

Kids are a hoot. They’re hilarious. They keep me young.

This is the world that I’m in. I want to inspire Jewish kids, I want to make sure that they stay Jewish, that their bar mitzvah experience is not a horrible experience.

Some of the bar mitzvah kids I work with are 14, 15, and they just decide to have a ceremony later in life. I like those kids very much. They’re practically adults already. You can talk to them a little differently. It’s really great. They’re there because they want to be. My job is to get them psyched about it, to get them to want to do it on their own.