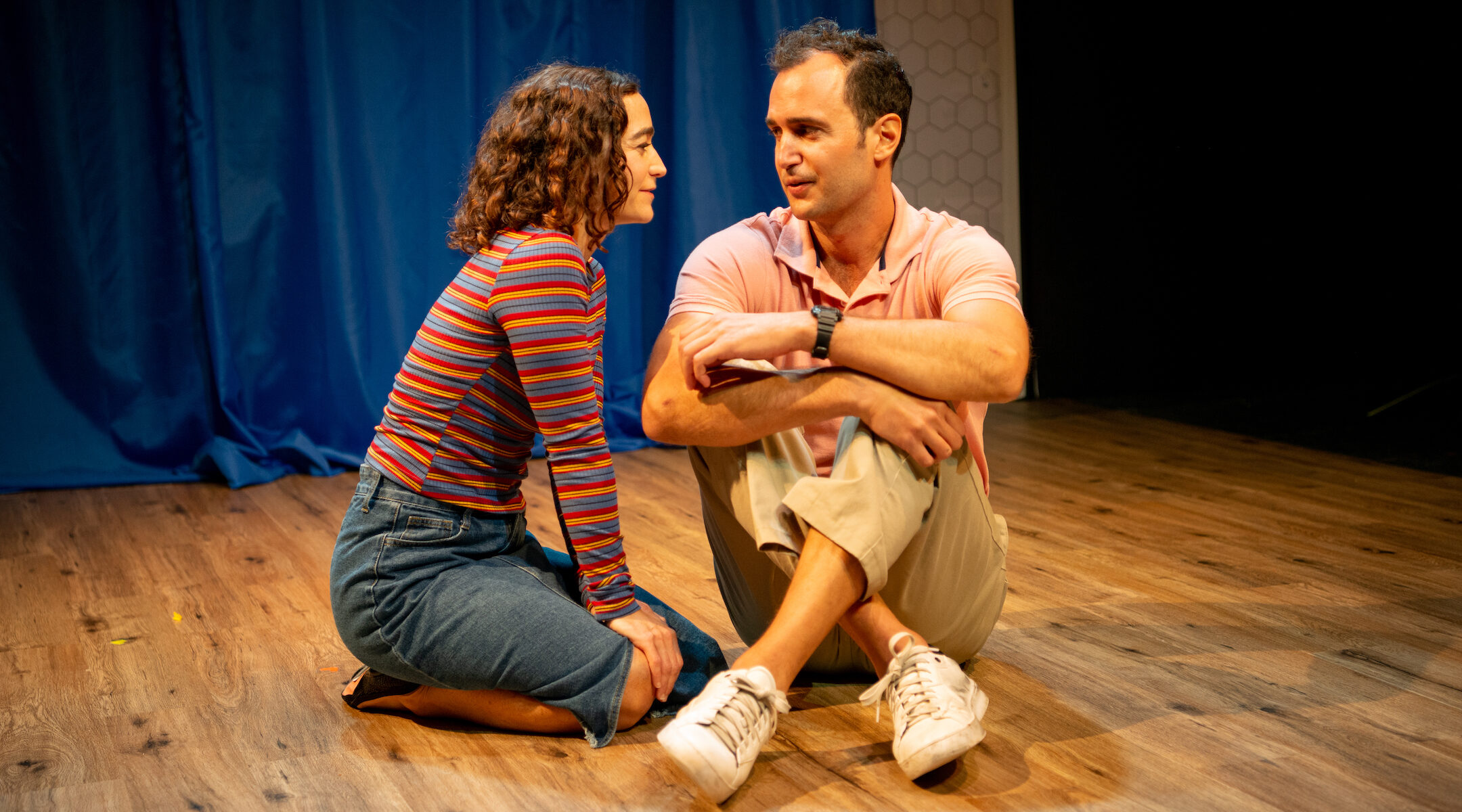 (New York Jewish Week) — These days, Jared Kushner is world famous for being former president Donald Trump’s son-in-law. Depending on your perspective, you might also consider the 41-year-old the architect of the Abraham Accords, or possibly the Mar-a-Lago mole, or maybe the author of an “earnest and soulless memoir.”

“It’s not like I know him, but I know his type because I also grew up in New Jersey, close to people like him,” Swirsky, 38, told the New York Jewish Week. “And I was like, it’s so strange to see this kind of person in the public eye like this.”

Thus is the backstory of Swirsky’s latest play, “Don’t Do This to Us!”, now playing at the Tank, a non-profit theater in Midtown. Specifically, the plot centers on Rachel (Mara Kassin), a disgruntled lawyer who finds herself angrily obsessing over Kushner, holding him accountable for the increase in antisemitism seen since 2016. Why? According to the play’s press materials, “his public image embodies the worst of Jewish stereotypes: he’s wealthy, avaricious, and ominously wields world power behind the scenes.”

Chatting with her friend, Ravit (Rivka Borek), Rachel wishes she could time travel to the 1990s, hook up with young Kushner and “break his penis” — yes, you read that correctly. The reasoning is that a broken appendage would make him unappealing to Ivanka Trump, Trump’s daughter and his future wife, and therefore spare him (and all of us) his White House stint.

Then, lo and behold, that evening, while lighting Shabbat candles, Rachel is magically transported to an Orthodox youth group event, a Shabbaton, in 1999 New Jersey, where the future presidential adviser — here, a tall, awkward yet confident teen played by Grant Harrison — is in attendance.

The premise stems from a real conversation Swirsky had with a friend shortly after the 2016 election. “I was like, ‘Wouldn’t that be a funny premise for a show? Should I write that show?’” Swirsky recalled. “My friend was like, ‘Sure, yeah. Write that play.’”

The majority of “Don’t Do This to Us!” — which took shape over the course of five years, with considerable input from the cast and the director, Tasha Gordon-Solmon, Swirsky said  — takes place over the course of a single Shabbat. It focuses on a group of girls who orbit around 17-year-old Jared, who awkwardly flits on and off the stage, occasionally referencing his hero, Margaret Thatcher. The group’s ringleader, Elisheva (Alex Trow), has a crush on him, but the girls seem to think that he likes Shira (Lilli Stein), a brainy, do-gooder who is organizing a walk to support Kosovo. Rachel, meanwhile, remains undeterred in her sausage-smashing mission. Throughout the hormonal course of the Shabbaton, topics as wide-ranging as body dysmorphia, Sephardic Jewish stereotypes, support of Israel, cancer and the Holocaust are addressed.

Little details about Kushner are sprinkled throughout “Don’t Do This to Us!”, courtesy of Swirsky’s neighbor who went to middle school with him. “A lot of the strange little facts in the play are from stories he told me,” she said. “Jared really did have the New York Giants at his bar mitzvah, signing autographs.”

Kushner, of course, grew up in an Orthodox Jewish household, the scion of a wealthy real estate family in Livingston, New Jersey. His father, Charles Kushner, founded Kushner Companies, gave generously to Jewish causes and political candidates and later went to prison in 2005 for fraud, tax evasion and witness tampering. (He was eventually pardoned by Trump.) His grandparents, Rae and Joseph Kushner, are Holocaust survivors; his grandmother dug a tunnel to help Jews escape the Navahrudak ghetto and later became a member of the Bielski partisans.

The family’s “Nazi-fighting” background gets several mentions in the play; Jared, meanwhile, gives himself some kudos for his basketball skills. “He kind of never lived up to anyone’s expectations,” Swirsky said.

What makes “Don’t Do This to Us!” click are the uber-specific details of Jewish youth group life in the pre-smart phone era. Take, for example, the absurd amount of time Jewish teens spent sprawled upon the floor (something I, a NFTY-ite, had completely forgotten about until I saw it onstage), or how trips to the bathroom were sometimes the only reprieve from a dull afternoon program. Despite the simple set, the attention to detail is incredible — from the lingo the teen girls use down to their very specific Modern Orthodox take on ’90s fashion. (Though she grew up on the Jersey Shore as a member of USY, the Conservative youth movement, Swirsky now lives on the Upper West Side, where she found endless modern Orthodox inspiration to send to her costume designer, she said.)

Toward the Shabbat-ending ritual of havdalah and the play’s conclusion, the antisemitic canard of blood libel is tackled head-on — and downright shocking to see it on stage. (No spoilers here.) Then again, the poster for “Don’t Do This to Us!” also traffics in the stereotype: It depicts a headshot of Kushner with his mouth cartoonishly stained with blood. 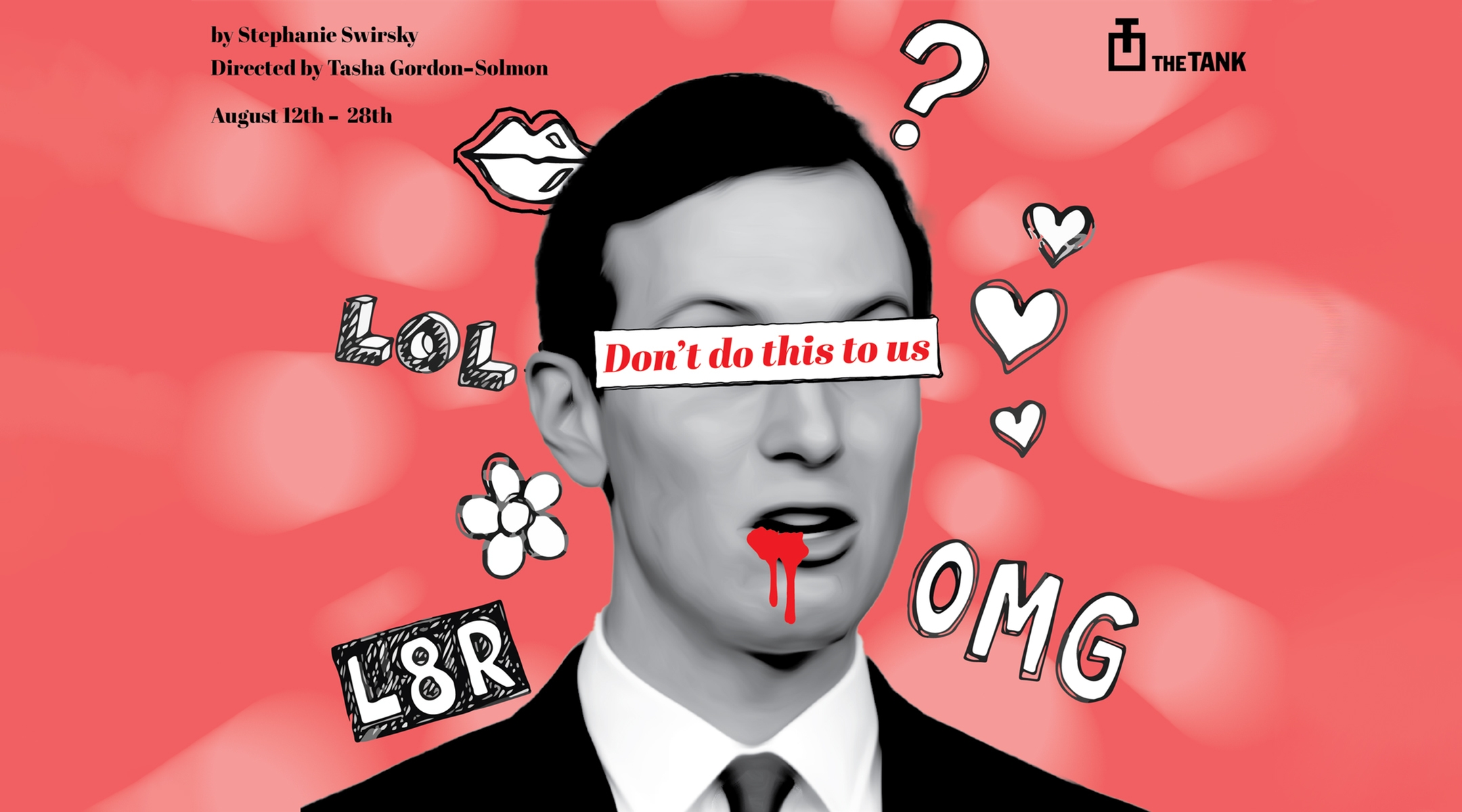 The poster for “Don’t Do This to Us.” (Courtesy of The Tank)

Confronting these antisemitic falsehoods is entirely the point of the play and its promotional materials, Swirsky said, adding that she deliberately sought a Jewish designer to create the image. “I knew I wanted to invoke some of that, because that’s what the play explores … the ridiculousness of these antisemitic tropes,” she said. “The things we put on Jews, throughout thousands of years of history, are so absurd it becomes funny.”

That absurdity, she continued, is what pushed her to explore this extreme trope in “Don’t Do This to Us!” “How can I push this to the level of, like, Jared is literally the embodiment of every bad Jewish stereotype to the point that he commits blood libel,” she said. The play “is showing that you cannot put all of that on one person. “

The piece raises a lot of important questions about Jews and antisemitism but doesn’t answer them — and that’s by design. “I don’t intend for my plan to answer any questions at all, actually,” Swirsky said. “As much as I want to be bold and really specific, I also don’t want to control what people think when they walk out of it. I think what is best is for people to grapple with the questions that the play brings up and to have conversations.”