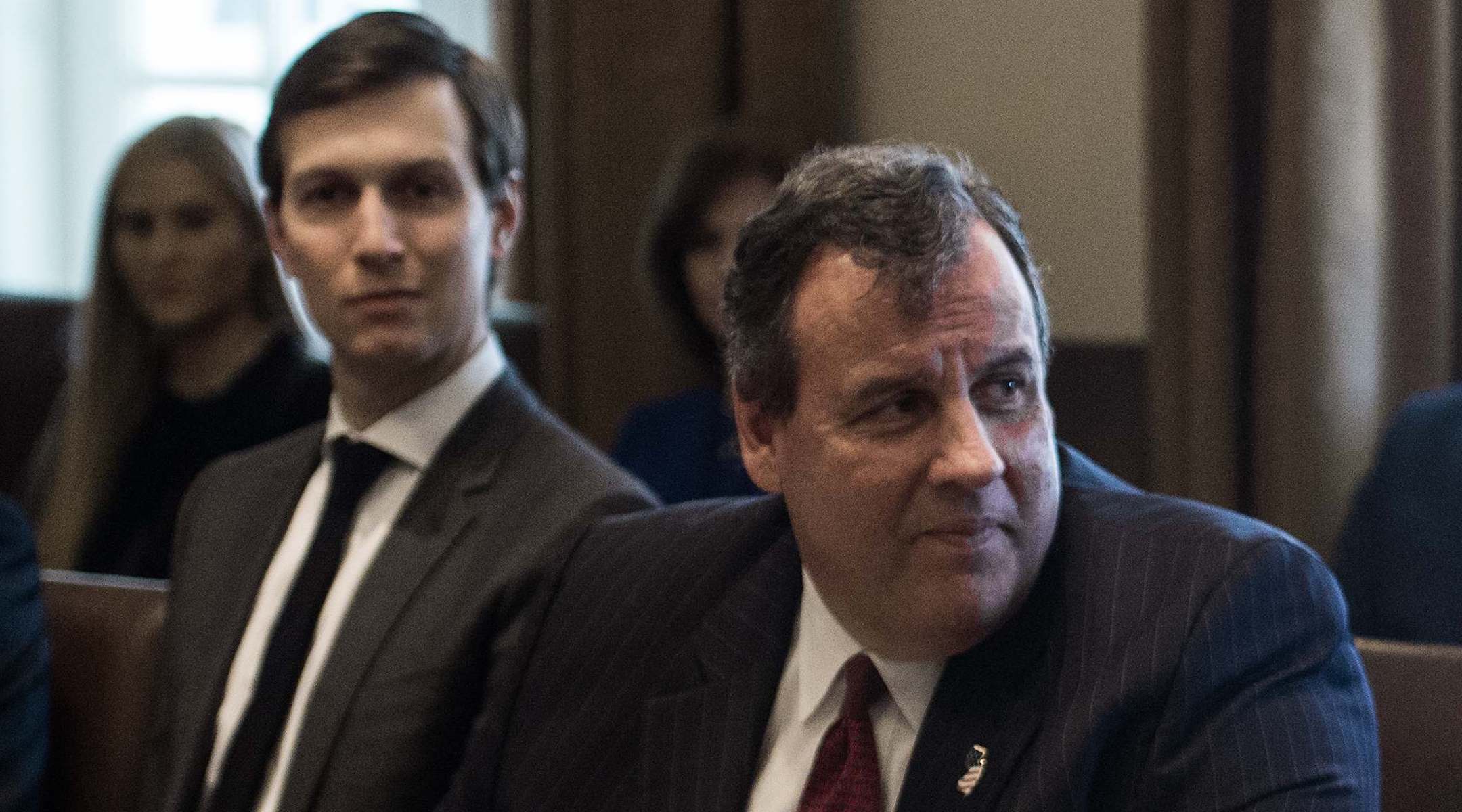 As a U.S. attorney, Christie in 2005 sent Kushner’s father, Charles, to jail for fraud, tax evasion and witness tampering. In 2016, as his father-in-law’s closest adviser, Kushner put the kibbosh on Christie’s prospects as vice president.

In his book released Tuesday, the voluble Christie adds lots of flesh to the story — and it isn’t pretty. “Let Me Finish” is the print version of the professional wrestling spectacles Trump is said to enjoy: sucker punches and macho posturing.

It’s one part love letter to Trump, nine parts score-settling, with nary a female in site. Even Christie’s wife, Mary Pat, appears only now and then to nod in long-suffering assent.

The most riveting scenes describe three masculine egos, Trump, Kushner and Christie, squeezing the air out of a room. It is Trump who understands that in a different universe Kushner and Christie, prone to ignoring political niceties and with an aptitude for hardball, might get along. When Kushner tries to talk Trump out of hiring Christie as transition chief, Trump instead proposes they hash it out over dinner, with Kushner’s father invited. To Christie’s relief, Kushner declines.

How true is the book? It corresponds with news accounts, but unless Christie had a recorder running, the dialogue is reconstructed and there’s no way to confirm it. The White House did not reply to a request for comment.

So it will have to wait until the tight-lipped Kushner writes his own tell-all (“Let Me Start”?) to go full “Rashomon” on this tale of two pit bulls.

Meantime, here are five takeaways from a book about a three-way bromance that never had a chance.

Yes, we know that Kushner the older and the younger have long memories when it comes to perceived enemies. But with lawyerly skill, Christie slowly builds up to a climactic scene that casts Jared Kushner as infantile and delusional in his anger.

Christie depicts himself as a reluctant player in the 2004-05 prosecution of Charles Kushner, a developer, one-time big Democratic donor and a macher in Orthodox Jewish and federation fundraising circles. Charles Kushner’s sister, Esther, and brother-in-law, Bill Schulder, came to Christie’s office with an almost unbelievable story: They said that Charles Kushner set up his brother-in-law with an attractive hooker who laid the trap at Schulder’s regular breakfast joint, Time to Eat in Bridgewater, New Jersey. She lured him to her hotel room, the Red Bull Inn, and secretly filmed the encounter. Charles Kushner, incensed that his brother-in-law was testifying against him in a tax evasion case and convinced that his sister had married a nogoodnik, mailed the videotape anonymously. (It arrives as the Schulders are getting ready for their son’s engagement party.)

Christie is wary for a couple of reasons. One is the lurid details of the tale (“Time to Eat? Red Bull? You can’t make these names up!”). Also, the couple has no evidence that Charles Kushner is behind the setup other than Esther’s unshakable hunch that her brother is sending a signal not to testify against him in the tax evasion case. Christie proposes sending the Schulders over to a colleague in the U.S. Attorney’s Office, but a Christie staffer is eager to look into the videotape as a separate issue. Christie gives him a reluctant nod.

The staffer quickly delivers, finding phone records showing Kushner’s deep involvement in the setup and associates — including the seductress — expounding to investigators. It’s open and shut, according to this telling, and Kushner pleads guilty. Christie negotiates a relatively short and comfortable sentence — 14 months at a minimum security prison camp and 10 months at a halfway house in New Jersey.

Cut to 11 years — April 2016 — and 150 pages later. Given Christie’s reluctance and Charles Kushner’s plea, the younger Kushner’s protestations come off as irrational and childish.

As Jared Kushner delivered his objections to Trump’s naming Christie as transition chief, Christie writes, “His voice began to crack. ‘It wasn’t fair,'” he said.

Kushner’s tirade is, in Christie’s telling, short on facts and long on feelings.

“‘You don’t know what it was like for me,’ Jared said to Trump. ‘Almost every weekend, I flew to Alabama to visit [his father in jail]. He didn’t deserve to be there.'”

Trump isn’t having it.

Kushner conceded in the April meeting but maneuvers later in the summer to scuttle Trump’s preference for Christie as running mate. Two days after Trump wins the general election, Kushner has Christie removed as the transition chief of staff. Kushner consigns Christie’s exhaustive transition plan to the dumpster.

In their April meeting, Kushner attempts to persuade Trump that Christie did have alternatives to sending his dad to federal summer camp.

“This was a family matter,” Christie quotes Jared Kushner as saying, “a matter to be handled by the family or the rabbis.”

What mechanism in American law would allow a U.S. attorney to kick a tax evasion and witness tampering case to a rabbinical court is left unexplained.

Trump and Christie, at least before the presidency, were friends and met and dined frequently with their wives. Christie describes one such dinner around 2009 at New York’s 21 Club, where Trump announces that his daughter is engaged to Kushner.

Trump makes a point of telling Christie that one of Kushner’s conditions is that she convert to Judaism. Trump “was greeting the news, especially Ivanka’s religious conversion, with what I would describe as acceptance.” He quotes Trump as saying, “You never know what your kids will do next!”

Trump probes Christie for details about his prosecution of the elder Kushner.

“Remind me, there was some sleazy stuff, right?” Trump presses. Christie obliges and Trump’s reaction is “Oh, that’s not good.”

Jared and Trump don’t get scandal.

Christie and his wife lunched with Trump and Kushner at the White House on Feb. 14, 2017 — just after Trump fired Michael Flynn, his national security adviser, for lying about his contacts with Russian officials. Christie again depicts Kushner as naive and offering invective instead of argument.

Trump tells Christie that the firing would put an end to the emerging Russia scandal. Christie bursts out laughing.

“Sir, this Russia thing is far from over,” Christie tells Trump.

“What do you mean?” Trump answers. “Flynn met with the Russians. That was the problem. I fired Flynn. It’s over.”

“Guys, my guess is that we’re going to be sitting here at Valentine’s Day of 2018, maybe longer, and we’re still going to be talking about this.”

Christie hearts Donald, to a fault.

Christie’s early pullout from the presidential primaries and his endorsement of Trump consolidated the reality TV star’s status as front-runner. He gratefully describes what appear to be standard well-wishing calls from Trump after the pullout and is almost boyish in his praise for Trump’s in-your-face style.

“He is rewriting the playbook,” Christie said of Trump at his endorsement appearance.

It gets weird at times, with Christie giddily describing how Trump orders his meals for Christie when they dine.

In one cringe-worthy scene, Christie describes his disappointment in the intelligence community when they don’t get how funny the nominee is at his first intelligence briefing.

“The briefing began with a history of ISIS, how the terror network was founded and grew so rapidly. ‘Wait a second,’ Trump said, trying to lighten the mood with some humor at his own expense. ‘You mean Barack Obama didn’t create ISIS?’

“That claim had become a perennial at Trump campaign rallies. His critics decried it as a crazed falsehood. He saw it as vivid but truthful hyperbole, and the crowds always ate it up.

“I don’t believe anyone at the table cracked a smile.