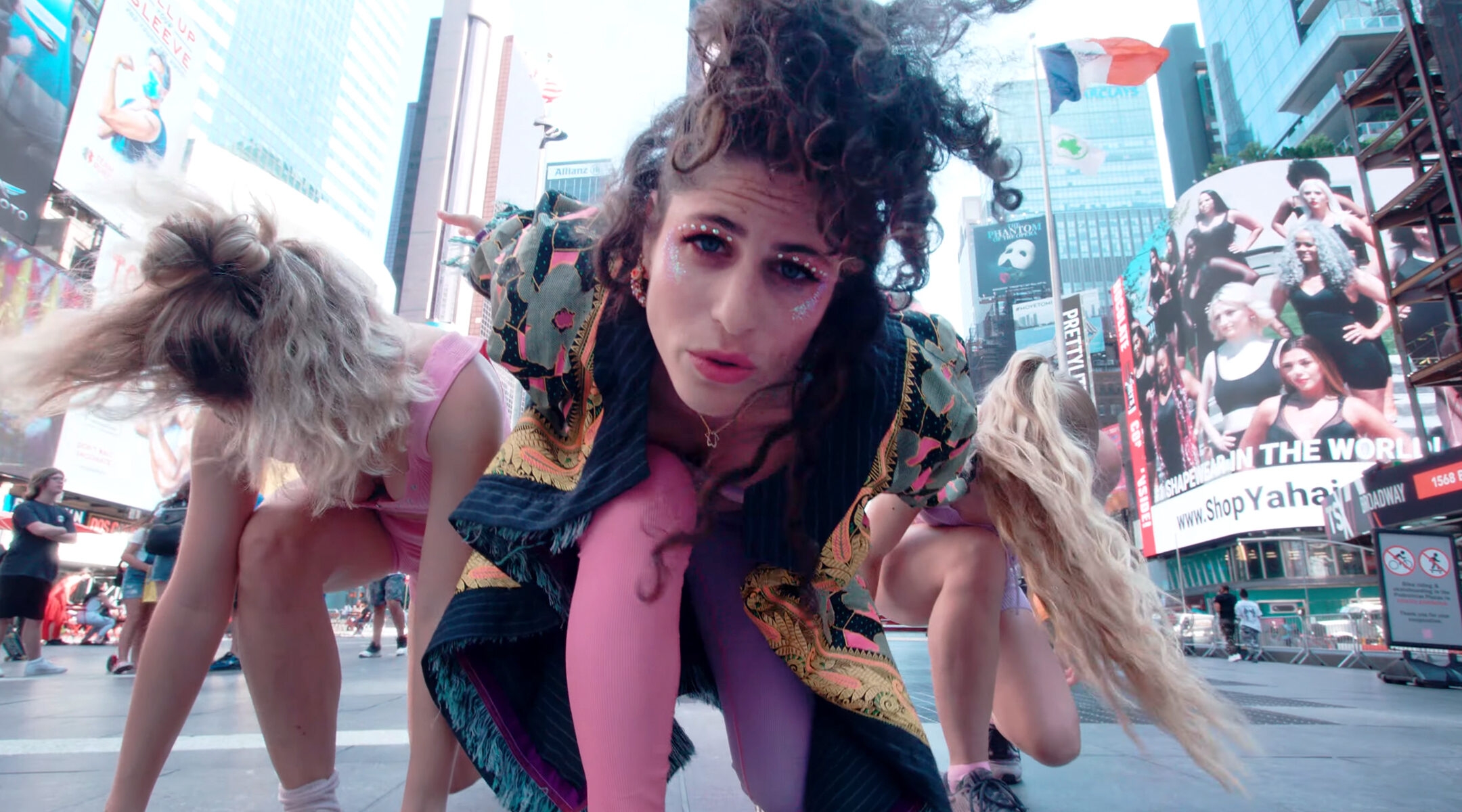 (New York Jewish Week) — One-of-a-kind Jewish musician Lea Kalisch, a 28-year-old native of Switzerland, said that her dream gig is to perform in Yiddish at the Super Bowl half-time show.

Since the NFL hasn’t called — yet — the singer is making do with writing and performing her own humorous, original songs.

A multi-hyphenate artist, Kalisch has made a name for herself in a variety of mediums since moving to New York in 2014. She’s performed in numerous Yiddish plays, including her one-woman, multilingual show, “In Love with a Dream.”

That same year, 2019, she had a part in the buzzy Jewish horror film, “The Vigil.” Her 2020 song and video, “Eshet Chayil of Hip Hop” —  which riffs on a Jewish song, translated as “Woman of Valor” and traditionally sung on Friday nights —  garnered attention as it featured a sexily dressed Kalisch wearing a shtreimel and rapping while strolling through Jerusalem’s Machane Yehudah shuk, or market.

Just last month, she debuted an original song and video, “Run, Run, Run” — the latest single off her new album, also called “In Love with a Dream.” Less intensely Jewish than the aforementioned projects — though Kalisch sports a Star of David necklace throughout the video —  the song encapsulates the intensity of trying to “make it” in show business in New York. “Too short, too fat, ten no’s, one yes,” Kalisch sings. “Believe in yourself, you’re enough, don’t get depressed!”

“Everyone is a runner,” Kalisch told the New York Jewish Week about the city that inspired the song. “They are running to the subway, running to an audition or running in Central Park!”

It’s the kind of hustle that Kalisch is intimately familiar with. She came to New York eight years ago to attend The American Musical and Dramatic Academy, eventually garnering her BFA from The New School. Her dream was to be a Broadway star and she went on auditions “against thousands of other girls” — something that inspired the artist to create her own roles and work.

Singing in Yiddish is one way that Kalisch —  who is fluent in English, French and German, and also knows Yiddish, Spanish, Italian and Hebrew — sets herself apart.  “A lot of people think of Yiddish as an older generation’s language,” she said. “But Yiddish is sexy and sultry. I know it’s a niche thing. But it’s gaining a lot of [attention on] TikTok. My mission is to bring Yiddish to connect Jews all over the world. It’s poetry that shows the essence, the trauma and the culture of Judaism. It’s the language of my neshama, of my soul.”

She said she was inspired by her grandfather, Eduard (Akiva) Kornfeld, a Holocaust survivor who died a few years ago at the age of 90.

Kalisch has a penchant for wearing traditional Jewish head coverings while performing. “I had a Russian fur hat from my grandma [that] I wore in New York,” Kalisch explained. “I started rapping and singing and I thought it looked cool. At the same time, I was meeting Hasidim, so I started to wear a shtreimel. It became like a fetish. It’s a fashion statement and I think it looks good on women. It’s also a symbol of women’s power and a celebration of Judaism.”

While mainly shot in Israel, the “Eshet Chayil of Hip Hop” video also features Kalisch and some dancers wearing the traditional fur hats while shaking it in Times Square. “Times Square encapsulates the feeling that you can be larger than life and it shows that anything is possible,” she said. “Who could have thought that I would be there wearing a shtreimel and people would take pictures? It was very surreal.”

Times Square also features prominently in the “Run, Run, Run” video, which shows the singer racing through the city, stopping to dance with some costumed characters in the highly touristed district. “I love the bustling energy of New York, of everyone that is going after a dream,” she said. “There is such an inspiring determination. It’s inspiring because people have to take a lot of crap along the way.”

“I love that anything is available at any time of the day,” said Kalisch, who now splits her time between New York City and Minneapolis. “It’s overwhelming. I think that’s why some have a love/hate relationship with New York. That’s why it comes through in my video, it’s always hustling. There’s always the fear of missing out. It’s hard to have friendships because there are people who are opportunistic. But of course, there are great people that can help.”

A former competitive figure skater, Kalisch’s other passions include her boyfriend, Rabbi Tobias Moss, who goes by the moniker of Rabbi T, with whom she occasionally performs. She also said she loves things that clash and enjoys posing questions with her artistry.

“Can you wear a shtreimel and be a princess?” she asked. “Can you be a sexy dancer and an Eshet Chayil? Can you be two different things in public at the same time?”

“I am not controversial on purpose,” she added. “I guess I just have a lot of chutzpah.”