An ode to Cafe Viva, the Upper West Side’s most distinctive kosher pizzeria 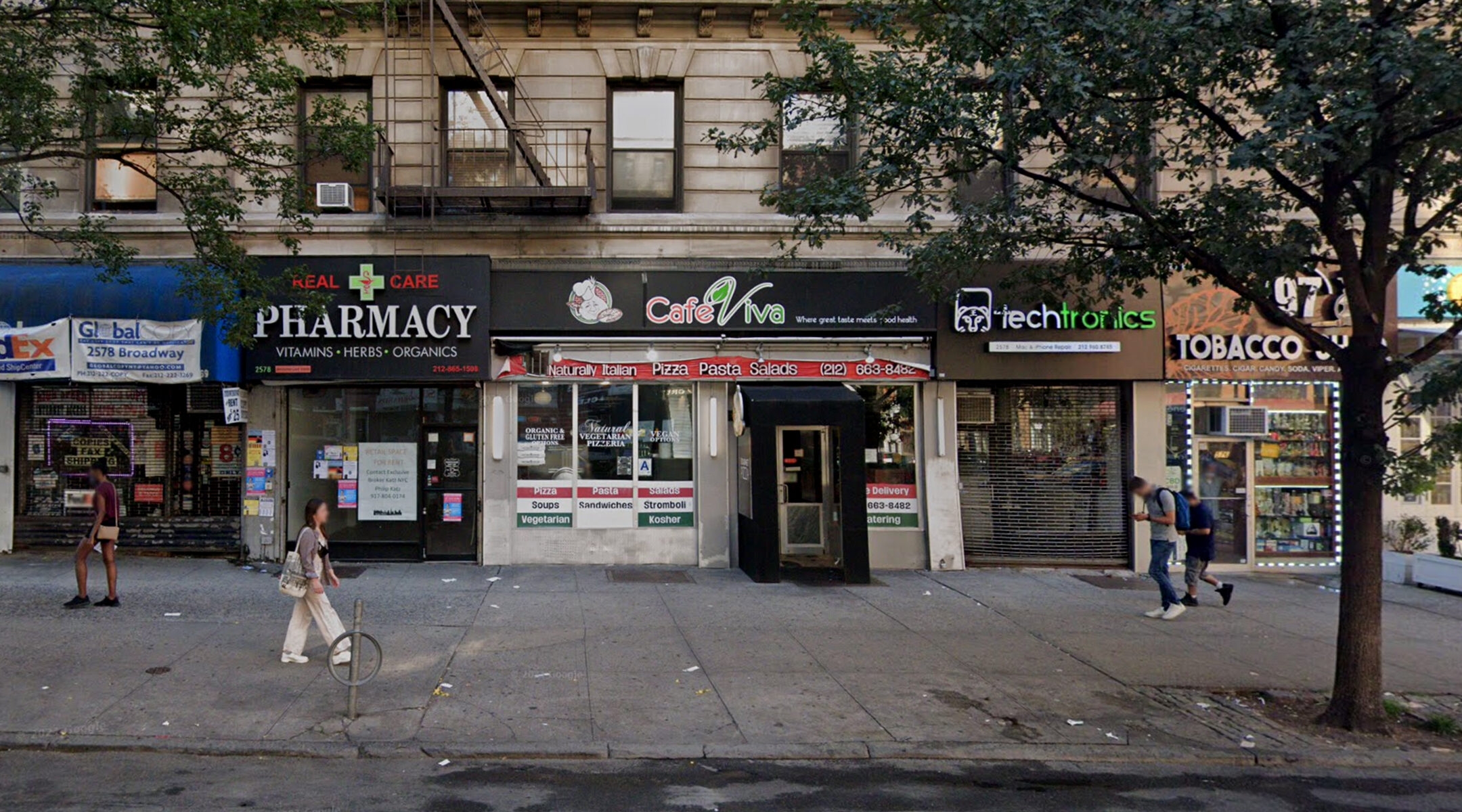 Located at 2578 Broadway on the Upper West Side, Cafe Viva Gourmet PIzza had been in business for 30 years. (Google Maps)
Advertisement

(New York Jewish Week) — I can’t believe I’ll never have another Bella. Or Azteca. Or Zen.

The Upper West Side establishment, which had been open for three decades, abruptly closed its business on Monday. My family had ordered a Viva pie just three days earlier, not knowing it would be our last.

As a member of its devoted customer base, I was shocked to learn its business was on shaky ground, as its owner Tony Iracani told the blog I Love the Upper West Side, which broke the news of the closure. My friends and I immediately began texting each other about the terrible news, quickly realizing we had “survivor’s guilt.” Though we all considered ourselves regulars, we worried: Had we done enough to keep this beloved pizzeria in business?

When I first moved to the Upper West Side in 2012, I lived around the corner from Viva. I ate there or picked up a slice (or three) to take home on so many occasions that I shudder to think how my bank account was affected by the restaurant over these last 10 years.

There was one Saturday night in 2018, immediately after Passover ended, that my husband and I bolted over to Viva to have our first taste of leavened pizza perfection. The following evening, we went in search of a satisfying but easy dinner before we had fully restocked our post-Passover pantry — and found ourselves right back at Viva 24 hours later. 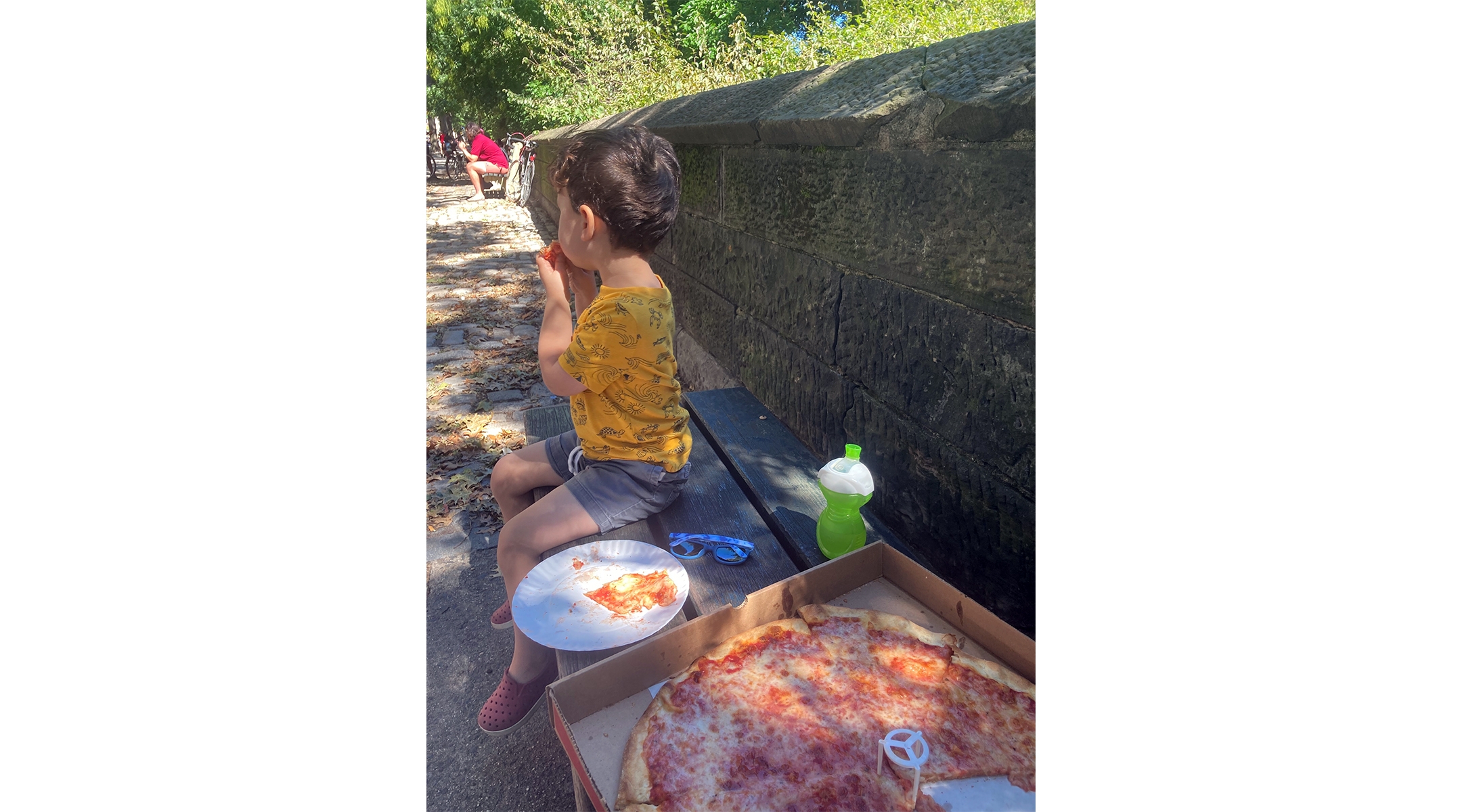 The author’s son enjoying a Napoletana pizza from Cafe Viva on a warm day in September 2021. (Courtesy)

During the first year of the pandemic, through pregnancy and my kids’ earliest years, we ordered Viva practically every Saturday night: a large Napoletana — the fancy name given to their regular cheese pie — plus the occasional side of home fries. It was a ritual that grounded us during a destabilizing time.

What made Cafe Viva’s pizza so distinctive? It had specialty slices that were unique. It offered gluten-free and vegan slices before these terms became common, plus bowls of hearty minestrone soup and whole wheat garlic knots that gave me such a smell sensation that it seems unlikely I can forget it anytime soon.

What it was not was a typical kosher pizza joint. For one thing, it ran under an independent kosher supervision, which meant there were plenty of kosher-keepers on the Upper West Side who didn’t feel comfortable eating there. As a kosher-keeper myself, I’ve eaten some objectively terrible pizza, because that was the pizza available to me. But at Viva, we didn’t have to be ashamed of our pizza. Because of its unique menu items, it attracted a wider audience than many “mainstream” kosher establishments. (Want proof? Hip-hop artist Lupe Fiasco declared “it was his spot.”) It was a special pizza place that happened to be kosher.

Once, when Viva changed its rabbinical supervision, my husband, a rabbi, called the restaurant’s kosher supervisor to figure out if he’d still feel comfortable eating there. My husband felt satisfied by their response, but the truly exciting news that came out of the conversation was the suggestion that my husband could become a potential kosher supervisor for Viva. The tantalizing opportunity to get even more Viva in our lives never materialized, but for a brief moment, it felt like a golden ticket.

For now, I’ll have to settle for a homemade Bella pie, topped with spinach, pesto, feta and red onions. It’s better than nothing.