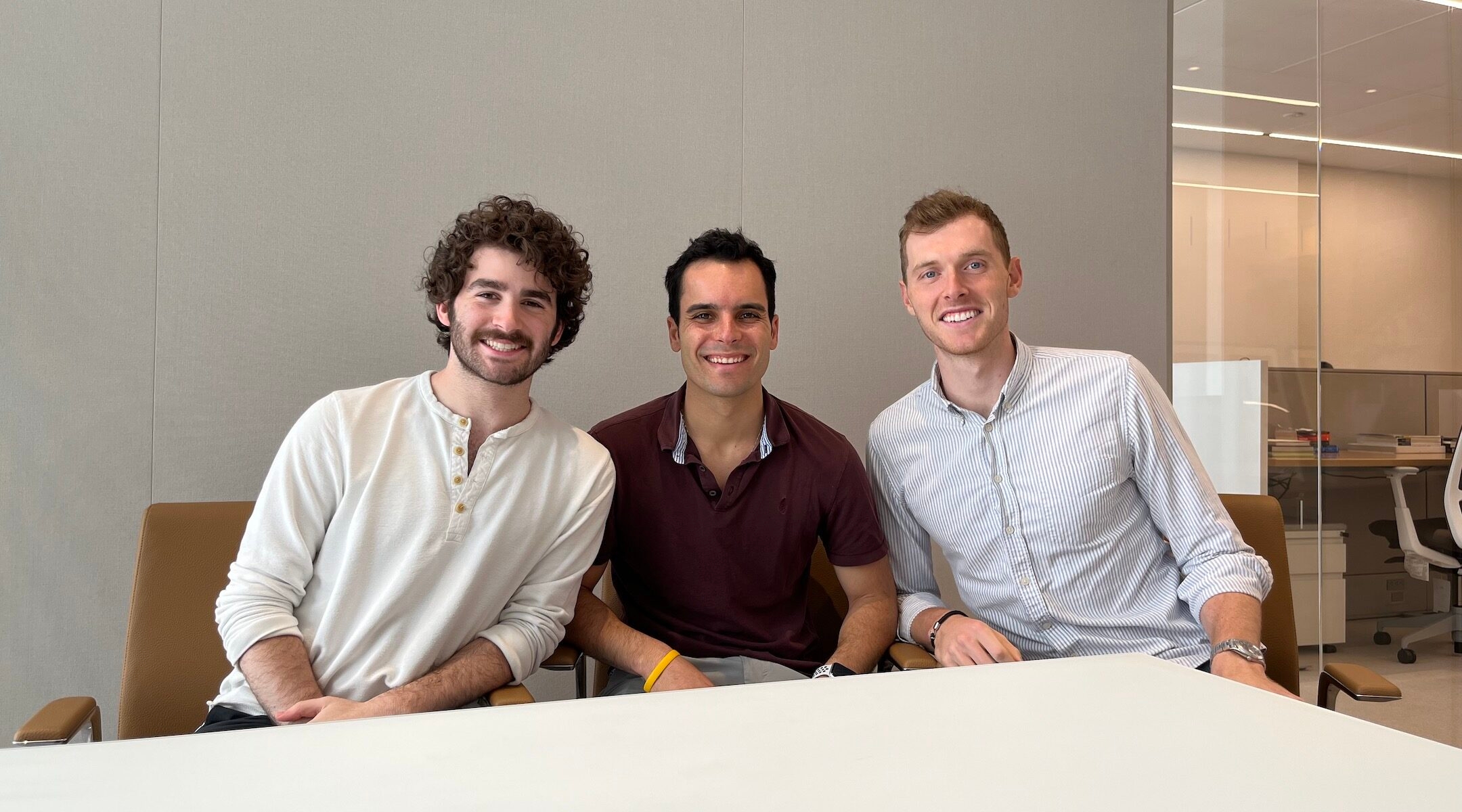 Drew Schneider, Salo Serfati and Aaron Kahane (left to right) are building out Chariot, a startup for speeding up the charitable-giving process, in a borrowed Midtown office space. (Julia Gergely)
Advertisement

(New York Jewish Week) — Imagine if donating to charities online were as easy as shopping on Etsy or ordering toiletries from Amazon. This is how Chariot, a tech startup with a Jewish value at its core, hopes to transform the future of philanthropy.

Chariot’s 20-something Jewish founders, Salo Serfati, Aaron Kahane and Drew Schneider, have one goal in mind: to help the next generation of earners to see themselves as active, effective givers — and to make it easier than ever for anyone to make charitable contributions.

“We wanted to help people identify as givers,” Kahane, the company’s 24- year-old COO, told the New York Jewish Week while sitting in a conference room in an office just blocks from Central Park, where they’re currently “borrowing” a few desks from Kahane’s brother.

The idea, he continued, is to encourage young people to “not just give when you’re asked to donate to a campaign or when you hear a tragic news event happen,” he said. “If you see yourself as someone who gives proactively — by setting aside money first before you’re even asked — you start to think about charity more critically and about helping people more often.”

Growing up alongside social media and online giving, Gen Z has been able to shape their activism and charitable giving more quickly and broadly than any generation before them.

Chariot hopes to fuse how previous generations give — through foundations, grants and funds — with the online immediacy and ease expected by Gen Z, and transform donors of all generations into proactive givers.

The Jewish identities of the founders have helped guide them towards improving the way they give charity. Both Serfati and Kahane attended Jewish schools growing up — Serfati at Scheck Hillel Community School in Miami after leaving a tight-knit Jewish community in Venezuela when he was born, and Kahane at SAR High School, the Modern Orthodox day school in the Bronx. Both attended yeshivas in Israel before college. Schneider, who grew up Reform, was active in his local BBYO chapter.

In launching Chariot, the young founders draw upon the Jewish principle known as ma’aser, or tithing — donating 10 percent of one’s income. “We grew up with that Jewish value,” Serfati, the company’s 25-year-old CEO explained. “Interestingly, everyone’s taught us that we should donate tzedakah but we’ve never been given a good structure of how to practically follow it.

Chariot’s big idea is to transform how donor-advised funds, or DAFs — investment accounts that hold money specifically set aside to be donated — are used to giving to charities online. There is currently some $160 billion in these funds, and they are one of the fastest growing vehicles in philanthropy, according to the National Philanthropic Trust, which publishes a report on DAF metrics every year.

While there are tax benefits for keeping charitable dollars in a DAF, Chariot’s founders recognized that getting money out of these accounts can be fitful: unlike with private foundations, there is no minimum payout per year for donor advised funds. Most Jewish communities have donor-advised funds, often connected with the local Jewish federations, whose donation process can be cumbersome and sometimes limit what organizations one can give to.

To donate as individuals, meanwhile, or to donate to personal campaigns, donors needed to find routing numbers, non-profit EIN identification numbers, and fill out pages of forms to get their money out of their fund and into a charity — a process that might turn some donors away.

So, said Serfati, they thought: “Why not fix DAFs biggest pain point, which is the payment infrastructure?”

Serfati has a history of trying to improve the ease of charitable giving. When he graduated from the University of Pennsylvania in 2020 and started earning his first paycheck, Serfati opened a separate checking account, consisting of 10 percent of his income, and tracked all his donations on an elaborate Excel spreadsheet.

When his friends and family took notice, Serfati, Kahane and three of their friends from Penn and from Serfati’s job at BlackRock launched a short-lived company in the summer of 2021, MyTenPercent, which provided users with a debit card to help make charitable giving a bit easier. But they hit stumbling blocks when they realized that similar ideas and companies already existed.

They eventually pivoted their idea to improving the user experience, and set out to build a payment button online. The button would allow donors to access and donate from their DAFs with one click — similar to using PayPal or a credit card. Chariot then sends a request to the fund for the donation to be approved, usually a formality. The friends tapped Schneider, 23, a former colleague of Kahane’s at Bain and Company, to become the Chariot’s chief of product. The company officially launched in March.

Nonprofit organizations can add Chariot’s payment button to their website; Chariot will team up with third-party payment platforms to integrate their button into their systems. Similar to a credit card, Chariot charges a 2.5% transaction fee to the donor every time they use the button, which is how they make money.

The idea was good enough for a spot in Y Combinator, a prestigious start-up incubator that counts AirBnb, Coinbase, Instacart and other now famous companies among its alumni. Chosen startups receive a $500,000 investment and a three-month crash course on pitching to investors and working out the kinks in their ideas.

As it happens, the three friends were together watching the show “Silicon Valley,” about a tech startup, when they got the call in early May that they had been accepted. “We got in and we were like ‘this changes everything in terms of our focus, our drive — everything,’” Serfati said.

“Aaron and I called our parents and quit our jobs the next day,” said Schneider.

Only four months after that call, the startup just closed its first seed round, raising nearly $4 million dollars, and is being backed by venture capital from the likes of SVAngel and Spark Capital.

After a week of workshops and networking in San Francisco, they’re back in New York, where they live, and are currently hiring a full-time team of engineers, signing contracts with nonprofits and building out the platform. Though they plan to go live at the end of September, they are already gearing up for Giving Tuesday, this year Nov. 29, the country’s biggest day of donations all year.

For now, they’re having the time of their lives starting a company together. “You learn every day, new challenges come up all the time,” Serfati said. “In the beginning, it just ‘gets the product out the door’, then it’s also sales, then it becomes fundraising, and then becomes hiring. There’s always a new mini game to be played.”

“Lines of code are moving millions of dollars to people in need,” he added. “That’s what inspires us to come to work every morning.”

For Schneider, since starting at Chariot, “My whole mentality has changed, and the way I interact with charity — I’m giving way more than I used to,” he said. “We want to educate people to teach them that it’s really an incremental change to have a huge impact.”