With the rise of federation-managed ‘donor-advised funds,’ politics can complicate Jewish giving 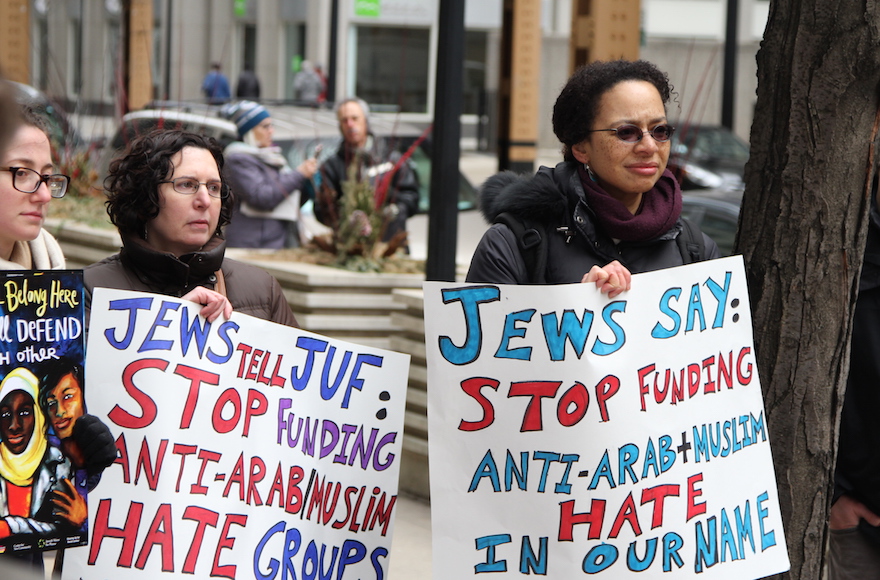 Greer and her husband, Joshua, had given millions to progressive Jewish and Israel causes, and she sits on the board of the Jewish Community Foundation of Los Angeles. So last September, she gave the $5,000 contribution to IfNotNow from her donor-advised fund at the foundation, a mechanism for philanthropists to give to specific causes via local Jewish philanthropic bodies.

But two days later, the Jewish Community Foundation, the planned giving arm of the Jewish Federation of Greater Los Angeles, blocked the donation. While Greer can choose where her fund’s money goes, the foundation has to approve every grant. And because IfNotNow protests federations and other Jewish establishment groups, the foundation said no.

It was the first Greer had ever heard of a grant being denied.

“We give to all different kinds of organizations. There’s never been an issue,” said Greer. “I’d never heard of this happening before. I was beyond shocked. I really did start shaking.”

Greer’s gift isn’t the only contribution from a Jewish donor-advised fund to come under scrutiny. Nationwide, donor-advised funds affiliated with Jewish federations give a collective $1 billion per year, according to the Jewish Federations of North America. Of those gifts, relatively few are rejected — but red lines surrounding donor-advised gifts remain unclear. Beyond confirming a recipient nonprofit’s legal standing, federations often mandate only that a recipient’s mission be consistent with the federation’s goals — itself a vague requirement.

“Jewish Federations’ charitable goals include aiding the most vulnerable, building vibrant Jewish communities and supporting Israel,” read a statement from JFNA spokeswoman Rebecca Dinar. “Grants to organizations that fall outside of those parameters require each community to apply their own judgment.”

What falls within and outside those boundaries?

While the Jewish Community Foundation of Los Angeles blocked the IfNotNow grant, it has allowed grants to the New Israel Fund, which supports a range of nonprofits that oppose occupation. Federations have also faced pressure on donor-advised donations to right-wing groups.

Last Thursday, Jewish Voice for Peace, which supports boycotts of Israel, issued a report tallying donor-advised gifts via Chicago’s federation-affiliated foundation to groups that JVP describes as “Islamophobic.” According to the report, gifts to two organizations — Middle East Forum and Investigative Project on Terrorism — totaled nearly $800,000 between 2011 and 2014. (Both groups say they do not oppose Islam but rather “Islamist violence” and “radical Islamic involvement in terrorism.”) Last year, students in J Street U, the student arm of the dovish Israel lobby, wrote an op-ed in the Forward detailing donor-advised gifts totaling more than $60,000 via the Chicago and Milwaukee federations to groups that fund West Bank settlement construction.

“If their only basis for who they give money to is whether it’s legal, they need to stop saying they stand together against all forms of hate,” said Michael Deheeger, one of the JVP report’s co-authors, about the Chicago federation. “They still retain total discretion over whether to let money go to these organizations. They can stop this today.”

For wealthy donors, donor-advised funds are a way to make giving easier. They place their money into a tax-free charitable account, tell the federation where they want it to go and the federation takes care of the rest, including paperwork and tax filing. Federations benefit by receiving an initial donation from each donor as well as a small percentage of each donation. Traditional charities like The United Way and the Salvation Army run donor-advised funds, as do mutual fund groups like Fidelity and Charles Schwab.

Federations embraced donor-advised funds in recent years to cultivate wealthy families who wanted more say in where their donations go — unlike donations to the federation’s annual campaign, which are generally apportioned by the federation’s lay board and staff. But there are limits. Donors’ gifts from funds are subject to federation approval.

Andres Spokoiny, CEO of the Jewish Funders Network, which offers resources for Jewish philanthropists, said controversies on the margins of the funds shouldn’t tarnish their value as a way to facilitate giving. But the best way to assuage those concerns, he said, is for each federation to clearly set  its red lines.

“That gets inscribed into the broader question of what are normative positions for the Jewish community,” he said. “What are the limits of public discourse? It’s a debate that’s full of gray areas and the goalposts keep moving. The solution to that is to have an honest and open conversation in each community.”

Some federations do have specific policies on donor-advised gifts. Portland’s federation, for example, notes that it does not make its own allocations beyond Israel’s pre-1967 borders, but that it will generally accept donor-advised gifts intended for charities beyond the so-called Green Line. Others, including the Chicago federation’s foundation and the Los Angeles community fund, prefer not to single out any one cause or group in their guidelines for donors.

“It’s the donor’s money sitting at JUF, and very wide latitude is then given to the donor,” said Jay Tcath, executive vice president of the Jewish United Fund, Chicago’s federation. “Which is why there are groups on the right that are going to be funded that antagonize the left, and groups on the left we fund.”

Asked to elaborate on its denial of Greer’s request, the L.A. fund wrote in a statement to JTA that it will approve gifts to any nonprofit “whose programs and goals are not inconsistent with the fundamental mission of the Jewish Community Foundation,” and which is not anti-Semitic nor anti-Israel.

That included more than $750,000 of donor-advised gifts between 2011 and 2014 to the Middle East Forum, an organization led by researcher Daniel Pipes that the Southern Poverty Law Center included on a list of anti-Muslim extremist groups, and $26,000 to the Investigative Project on Terrorism, led by Steven Emerson, which also appears on the SPLC list.

“If they want to cast such a big tent that it puts them in the position of funneling money to hate groups, they need to stop positioning themselves as speaking on behalf of the entire Chicago Jewish community,” Deheeger said.

Tcath rejects JVP’s charge that his organization is Islamophobic, noting money it has raised for relief efforts in Syria and Bosnia as well as its work helping resettle refugees of all religions in Illinois. He said his federation opposes bigotry, and that SPLC’s list of Islamophobic organizations, which came out in December, two years after the period studied by JVP, could prompt a re-examination of those groups. But he added that JUF would not disqualify a group based solely on one or two of its founders’ offensive statements.

“Any bigotry is against our values and interests, but it is not for certain that everybody would really agree with that characterization of the Southern Poverty Law Center,” he said. “Are they serving the noble goals on which their mission statement is based? If that is the case, then we’re not going to stop the donors’ requests to the group because of this or that statement.”

The Chicago federation does set red lines: Tcath said any group that advocates violence toward, or forcible expulsion of, Arabs from Israel would not receive funding. On the left, he ruled out any group that promotes boycotts of Israel — including JVP — but not groups that support boycotts limited to the settlements. In the past, Tcath also recalls the federation denying a request to fund a church that engaged in proselytizing.

Tcath said he had “no idea” whether JUF would honor a request to fund IfNotNow, noting its focus on protesting Jewish federations like his own.

After being denied by the L.A. community fund, Greer gave her donation directly to IfNotNow. In the months since, she has kept her money in the donor-advised fund, noting her support of most of the organization’s work in the Jewish community. But she’s looking for a more progressive home for her philanthropy.

“If I can get a little bit of money back to the Jewish community through that 1.5 percent, it’s a good thing,” she said, referring to the percentage of each gift that goes to the Jewish Community Fund. “But I’m actively looking for an alternative, and if an alternative presents itself, or if I were given money to create an alternative, I would do it in a heartbeat.”