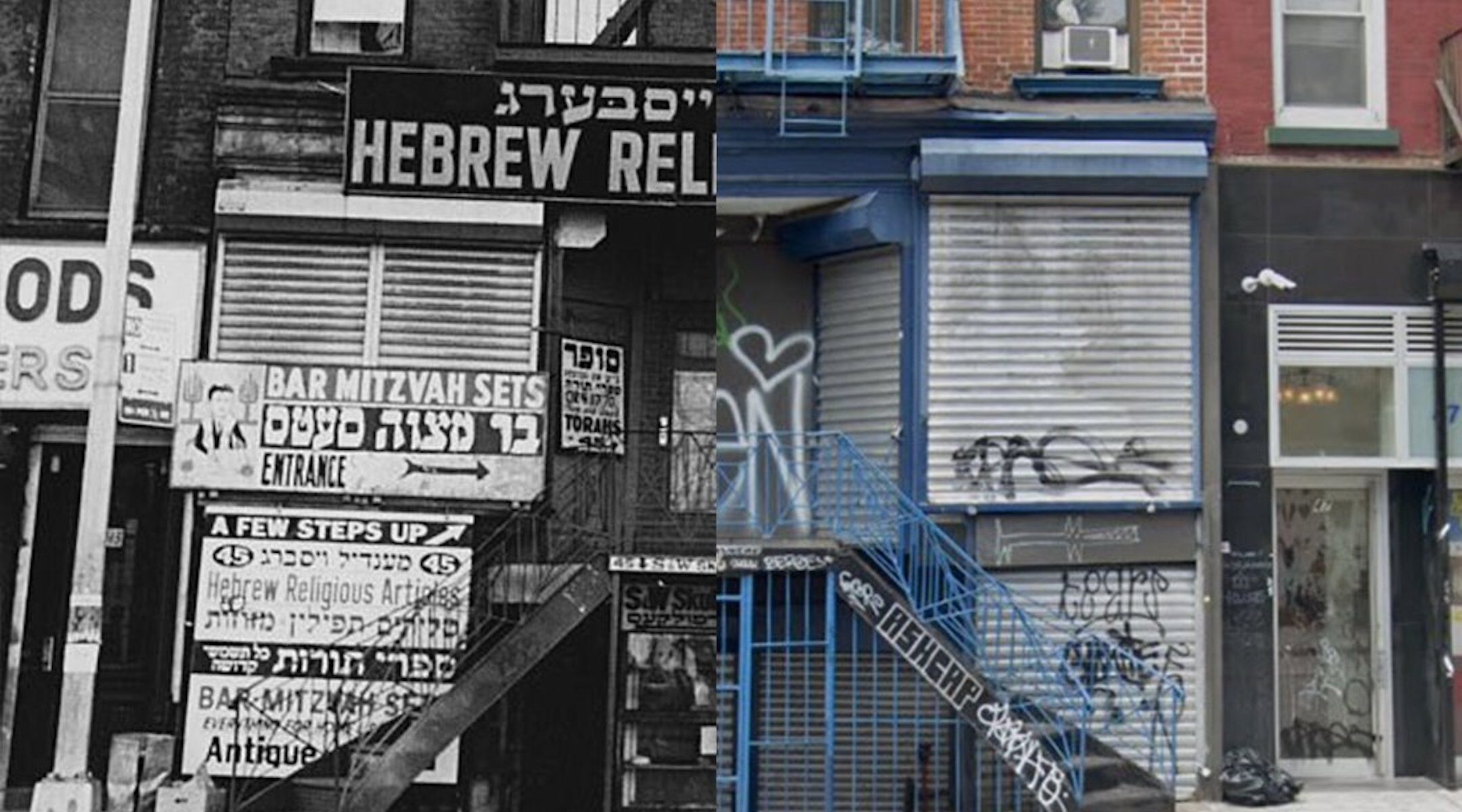 A photo of a Jewish Lower East Side storefront during the 20th century placed next to a photo of how it looks today. (Screenshot from Twitter)
Advertisement

(New York Jewish Week) – For a large part of the 20th century, the Lower East Side in Manhattan was the bustling center of American Jewish life.

Storeowners, peddlers and families all crowded into the neighborhood for a chance at success, as well as opportunities to rebuild Jewish communities left behind in Europe. But as the Jewish residents moved out to Long Island, Westchester, New Jersey and beyond — and other immigrant communities moved in — the neighborhood dynamics, storefronts and signage began to shift.

The changes in the neighborhood were recently captured in a Twitter thread curated by a Hasidic Jewish man living in Monsey, N.Y., who uses the Twitter handle “Hungry Chipmunk” and asked to be referred to here as “S.”

In black-and-white images, the excitement and grit of Jewish life in the Lower East Side — a neighborhood bound by East Houston Street and Canal Street to the north and south, and the Bowery and FDR Drive to the west and east — is shown in images of barefoot boys, Yiddish signage and names like “S. Wolarsky & Son, N. Schapiro & Sons sign makers and B. S. Kahan hosiery.”

In a thread on Aug. 21, S. posted side-by-side historical images of the Lower East Side and what it looks like now. His posts conjure the sights, smells and sounds of the old neighborhood, but also highlight the energy of today. “At 188 Delancey Street, the sound of humming shavers and snipping scissors at the barbershop has been replaced with children’s laughter in the playground of P.S. 142,” he writes in one tweet.

At 188 Delancey Street, the sound of humming shavers and snipping scissors at the barbershop has been replaced with children’s laughter in the playground of P.S. 142. pic.twitter.com/5aumTAr2Hd

S., who calls himself an amateur history buff, often finds himself combing through the archives of the Library of Congress or other online public libraries looking for pictures of 20th century Jewish life. One of a number of different groups and people across social media who post historical photos, S. collects his favorites in a folder on his computer, a hobby he’s had for several years now.

LOWER EAST SIDE: Then vs. Now

The LES was once the heart of Jewish life in NY. Hundreds of shops, stalls, and stores owned by Jews dotted the area, but as demographics shifted, so did the stores’ proprietorships.

Here are some of those shops — and what they look like today. pic.twitter.com/WR4afCspsb

“I can’t pinpoint specifically what drove me to do this thread,” S. told the New York Jewish Week. “But contrasting the then and now, there’s just a general sense of amazement and wonder when you see the buildings that are still around.”

Some of the locations are easy to find on Google Maps, especially if the address is in the description of the archive or visible in the image. Other matchups required detective work. Using databases that hold maps of the city and a Jewish newspaper archive from the National Library of Israel, S. was able to search old signage and then take a contemporary image.

“Although the shots look different, in some cases when you zoom in you can see the little corners of some of the brickwork that is still there. That’s really exciting and powerful,” S. said.

The shots also reveal the stages of assimilation in American Jewish life: In one image, which S. believes was taken between 1910 and 1920, the words “Men’s Furnishings” appear in English, and then transliterated below in Yiddish orthography.

A century ago, a barefoot boy stood outside a mens dry goods store and watched toiling workmen.

Now, the corner of Delancey and Suffolk is home to a defunct Burger King, an AT&T store, and an urgent care center. pic.twitter.com/Gi1WLLAA6S

S., who is originally from London, noted that looking at the vintage pictures of the Jewish storefronts of the Lower East Side, which range from 1910 to as recently as the 1970s, doesn’t make him nostalgic — especially considering that New York is still a hub of Jewish life, including but no longer confined to the Lower East Side.

“It’s melancholy in the sense of ‘I’d love to go back in a time machine and be there 100 years ago,’ but I can go to Borough Park, Monsey, Lakewood and Crown Heights. All these places have bustling, thriving avenues of Jewish stores,” he said. “It’s inevitable that communities shift and new ones come in.”

What is more emotional for S. are the number of defunct synagogues, a trend tracked by Twitter accounts like “Old Shul Spots,” which shares images — first in New York City, now all over the country — of locations where synagogues once stood.

“Whether they are torn down or converted for other purposes — religious or otherwise — the old pictures of synagogues give me a greater sense [of melancholy] because of the religious aspect of it. In Jewish law, a synagogue maintains its holiness, so that gave me a greater sadness,” S. said.

S. has also done threads on Jewish life in the East End of London and on Jewish pirates, but the thread on the Lower East Side, which received more than 1,500 likes and nearly 300 retweets, has been his most popular by far.

“What I would do to go back in time and visit all these places,” one follower tweeted. “These shops were the heart of the community.” Others reminisced about shops their grandparents visited or that they remember themselves.

Some users, S. said, assumed that the thread was meant to malign the newer immigrant communities that replaced the area’s once massive Jewish community, which he says was not his intention at all. He simply wants to appreciate a Jewish life of the past while acknowledging the power of the present. “All these geographical shifts are really inevitable, as communities wax and wane,” he tweeted. “But even as our zip codes change, it’s important to remember the grit of those who came before us.”

Although the Lower East Side once teemed with Jews of all types — Hasids and “freethinkers,” socialists and anarchists — S. focuses on its religious legacy. “I guess there’s a saying about standing on the shoulders of giants?” he told the New York Jewish Week. “Thriving Orthodox life wasn’t created in a vacuum. It was real people who put in their blood, sweat and tears to create general Jewish life and specifically Orthodox life in America and I wanted people to appreciate that.”