‘The Jews have arrived’: In Bucha and other decimated towns near Kyiv, a Jewish group distributes sorely needed supplies 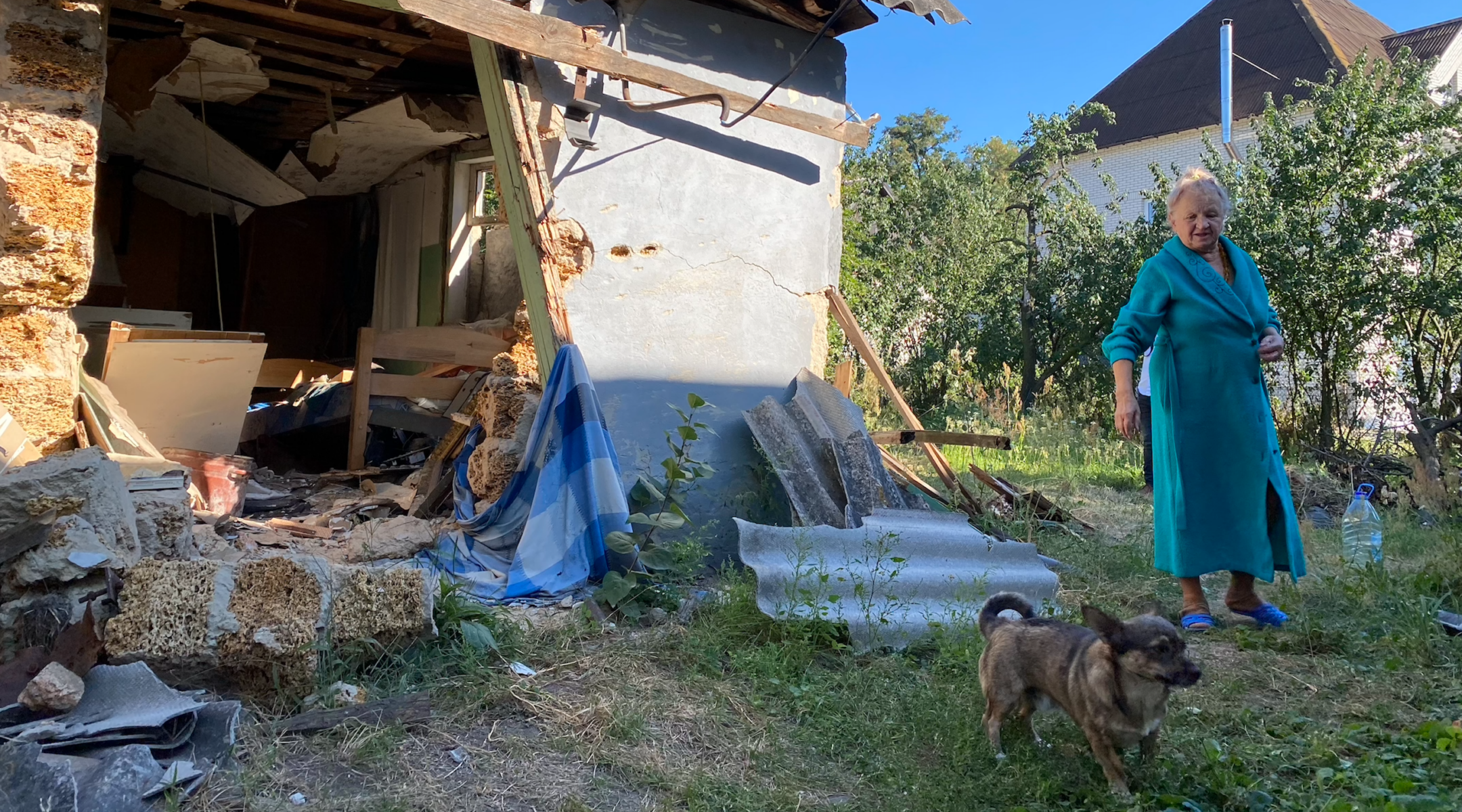 Zhanetta Butenko's house was partially destroyed when a rocket crashed through its roof in early March, in Hostemel, Ukraine. (Jacob Judah)
Advertisement

HOSTOMEL, Ukraine (JTA) — Bustling around with grandmotherly anxiety, Zhanetta Butenko apologized for the mess in her home — a rocket strike had partially destroyed it in early March.

“What on earth will you think of your host,” she said as she walked past walls pockmarked by machine gun fire. She picked up a mangled picture frame in what was once her bedroom.

“They were firing over the house, through the windows, they destroyed everything,” she said with a sigh, “but that’s life.” Her neighbors’ homes were flattened, and a burned-out car sits down the road.

Hours after Ukraine was peppered with missile strikes in the opening salvo of the Russian invasion Feb. 24, Russian paratroopers made a brazen attempt to capture a nearby airfield in the western Kyiv suburb of Hostomel. The Russians were initially beaten back but they occupied the town in early March.

Butenko is one of the 100 or so Jews that lived in Hostomel and the nearby towns of Irpin and Bucha, both of which were the sites of bitter fighting as Russian troops tried to punch their way down from Belarus towards the Ukrainian capital.

“There were so many explosions, I can’t even begin to describe it,” said Butenko, who is 83.

Along the nearby main road towards Kyiv, which had been the target of the initial overly-ambitious Russian plan, a destroyed Ukrainian tank with its turret popped off peeked out of an alleyway, symbolizing the ferocity of the fighting that raged around Butenko’s one-story home.

“I am already worried just thinking about it,” she said, touching her hand to her cheek.

The Federation of Jewish Communities of Ukraine, a group linked to the Chabad-Lubavitch movement that is Ukraine’s largest Jewish umbrella network, has been supporting Jews around Kyiv through monthly deliveries of food and supplies since the Russians completed a humiliating withdrawal from northern Ukraine in April.

As Butenko spoke, two men from the Federation of Jewish Communities carried four large boxes of supplies into her living room. Each box contained supplies worth up to $150 and the set of four can keep a small family going for up to a month. The federation says it is supporting some 37,000 Jewish households across Ukraine with such packages, at a cost of some $3 million a month.

The Federation, with its network of mainly Chabad rabbis across Ukraine, has played an important role in supporting Jewish Ukrainians across the country since the war started. It has also helped by organizing buses to evacuate Jews abroad and by facilitating temporary shelter for refugees in safe areas of Ukraine.

As the winter approaches, many Jewish households — especially the mainly elderly Jews supported by the Federation — are becoming increasingly nervous about how to cover basic costs as prices and energy prices rise across Ukraine. Butenko still lacks heating and busies herself by collecting documents that would allow her to claim support from the Ukrainian government before the frost arrives.

The initial rush of private donations has also begun to wane, and the Federation is becoming increasingly concerned about its long-term financial needs.

“The shortfall is already about $20 million that we are missing,” said Rabbi Meir Stambler, who heads the group, which is being supported by the European Union and the American UJA organization. 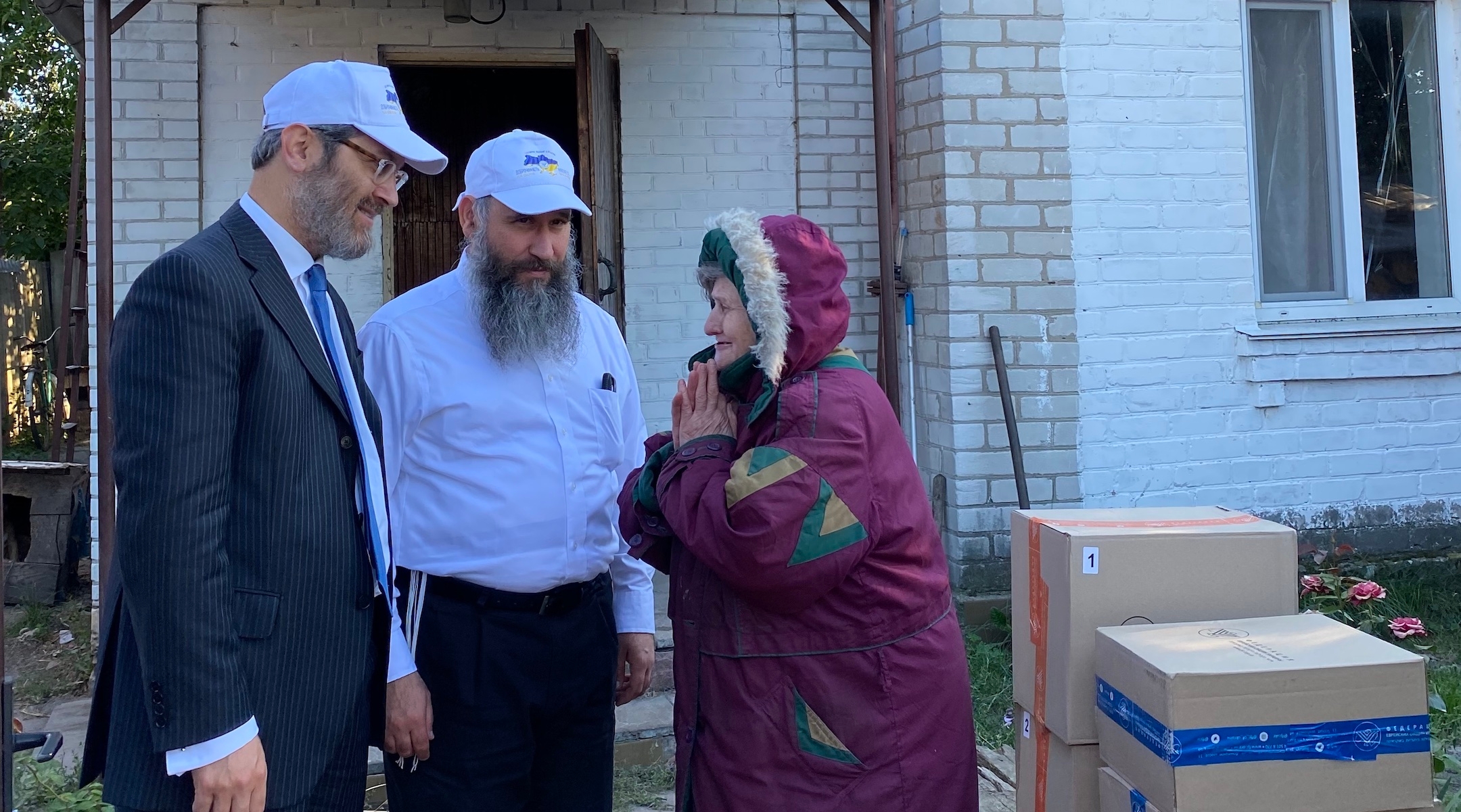 Rabbis Raphael Rotman, left, and Meir Stambler, both from the Federation of Jewish Communities of Ukraine, deliver boxes to an elderly non-Jewish Ukrainian woman in Bucha who has been receiving their aid for months. (Jacob Judah)

When the Ukrainians liberated Hostomel and the neighbouring towns of Bucha and Irpin, they found bodies littering the streets, buildings, and basements. Many carried signs of execution or of having been killed indiscriminately.

In Bucha, a town where the scale of the killings has etched its name forever into the narratives of the war, Sergei Soloviev clutched his kippah as he remembered the weeks that the town spent under Russian occupation.

He pointed at a group of houses obliterated by a missile strike that blew out his door and windows. Then he gestured off down the road. “Three houses down, one of my neighbors ran out into the street, and the Russians shot his head off.”

The body lay in the middle of the street, a quiet middle-class drag, for days until the man’s family was able to retrieve his body and bury him in the front yard. Sergei, 48, shuffled uncomfortably. “Dogs came,” he recalled.

These stories are not uncommon, but the fact that even the tiny Jewish population has its horror stories is an indication of how widespread the crimes that took place in the dozens of towns and villages in northern Ukraine were early on in the war.

Over 1,300 bodies have already been recovered from the towns liberated by Ukrainian soldiers in the Kyiv region alone. Figures within the Federation of Jewish Communities said that it is almost certain that Jews were among the civilians killed, but that they have not yet done a full accounting.

“It’s war,” said Rabbi Raphael Rotman, a British-born rabbi who has been in Ukraine since the 1990s, with a shrug. “It is not something far away, it is real, it is people that we have worked with.”

Struggling to heave herself up from her sofa, Sveta Azarkh, 85, wiped away tears as she described how helicopters were shot out the sky above the home where she lived with her sickly husband Yuri.

“When the Russians started going house to house, they were so aggressive,” she recalled. When her son opened the gate to a squad that had come to search their home, “they put a machine gun to his back and marched him back inside. They forced him to strip down completely to check for tattoos and bruises from wearing armor.”

As the fighting in Kyiv began to drag on longer than the Russians had expected and Ukrainian resistance picked up steam, Russian soldiers became increasingly paranoid that local civilians were sharing their locations with the Ukrainian military.

“They looked through every door, every cupboard,” Sveta explains. Other households in Bucha and Irpin told the Jewish Telegraphic Agency that Russian soldiers had searched their homes looking for mobile phones, weapons and anything that might associate residents with Ukrainian security forces. At Azarkh’s, the Russians stole anything that looked valuable, like watches.

As Ukrainian and Russian artillery exchanged fire over their heads, Azarkh’s elderly husband began to die. “Yuri turned to me and told me that he was dying,” she said. “I begged him: ‘Don’t die, Yura.’ I told him that I would have to bury him in the driveway.”

Yuri was buried in a patch of earth beneath a fruit tree in Azarkh’s front garden, until the Russians withdrew, when he was reburied in the local cemetery.

Two men from the Federation of Jewish Communities carried another set of four large boxes of supplies into Azarkh’s home. When the Federation dispatches its white van filled with food packages across Ukraine, wherever it goes, its volunteers and workers ask whether people know friends or neighbors — both Jewish and non-Jewish — that need help.

When asked at her home in Irpin, Evgenia Yakolevna, sprightly at 84, began making frantic phone calls to neighbors. “Are you home?” she shouted on the phone. “The Jewish community has arrived. We’re coming over.”

As she waited for answers to her phone calls, one of the Federation’s rabbis pointed to a Torah sitting on her side table with an appreciative nod. “I read it whenever I get the chance,” she said, smiling. 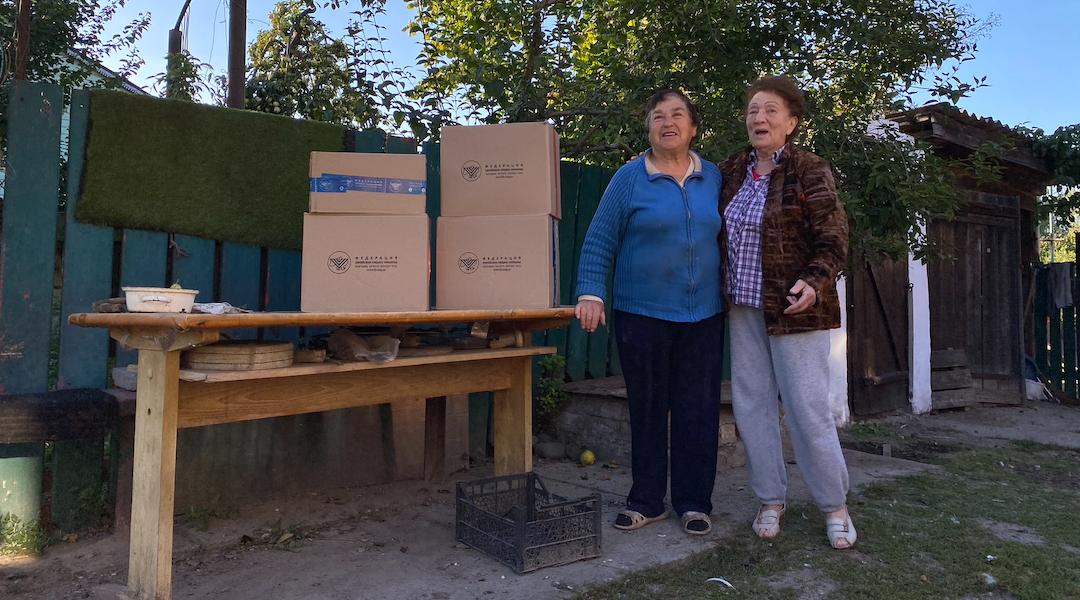 Evgenia Yakolevna, right, with her long-time non-Jewish friend, Masha. They each receive aid from the Federation of Jewish Communities of Ukraine at Yakolevna’s request. (Jacob Judah)

Yakolevna marched up and down the concrete staircases of her Soviet-era apartment complex with great confidence, knocking on doors and ordering the Ukrainian van driver to bring more boxes from the truck downstairs. The building is home to families who have fallen on hard times and elderly couples whose pensions have shrunk in value as the wartime crisis bites.

In one dimly lit apartment, a sickly elderly woman who can barely move croaks and began to cry in her bed when Yakolevna proudly declared that the “Jews have arrived.” The bedridden woman’s husband stood cautiously in a corridor. “Thanks, lads,” he said, trying to turn down the music from a Ukrainian police drama.

“We always ask if people have neighbors or friends who need support,” Rotman said. “This is an investment to help protect our Jewish brothers and sisters, because whoever their friends or neighbors are, they will be the first ones to help them when they are sick or in need of protection.”

Later, Yakolevna hitched a ride to the house of a friend, who emerges using the remains of a Russian rocket that crashed through her home as a walking stick. She had spent two months running down to her tiny cellar to shelter from bombings. More boxes are ferried from the waiting van into the yard.

“If this helps her feel better and gives her more protection when she lives as the only Jew in the block, or in the local area,” Rotman said, “then we are happy.”