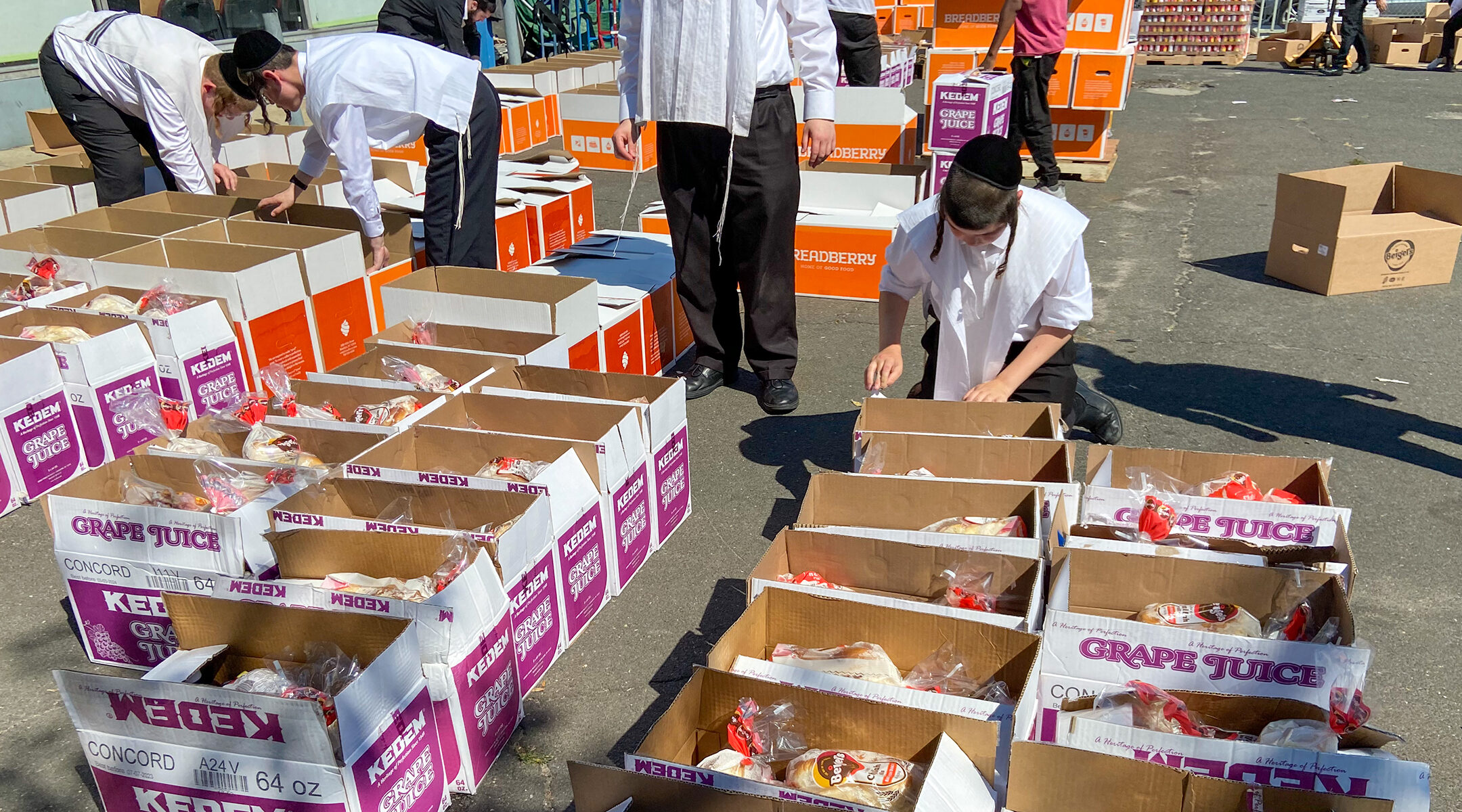 (New York Jewish Week) — Boxes of kosher potatoes, onions, honey and other High Holiday staples lined the parking lot of the Chesed Center in Borough Park, Brooklyn, as a line of of cars stretched down a few blocks, all filled with mostly Orthodox families in need of food for the holidays.

Tuesday’s food drive and giveaway was part of ongoing efforts by the Met Council, the Jewish-run anti-poverty nonprofit, to meet the needs of impoverished Jews in the New York metropolitan area. Met Council CEO David Greenfield said UJA-Federation of New York Jewish gave the organization an emergency $500,000 grant to help give out food to over 170,000 people this High Holiday season.

“We’re really facing a perfect storm of inflation and lack of federal funding and political gridlock where we have people really struggling in a way that we haven’t really seen in a very long time,” Greenfield said.

But while direct action like the Met Council’s kosher food network is the most visible of its activities, the organization is also lobbying behind the scenes for policy changes meant to address poverty and hunger.

Directly after Rosh Hashanah, which starts Sunday evening and ends on Tuesday evening, Met Council officials will head to Washington, D.C. to take part in the White House Conference on Hunger, Nutrition and Health, with the goal of showing how its work in New York can be effective on a national level

Greenfield told the New York Jewish Week that this is the first White House conference on this issue since 1969.

“This is a big deal because the last one actually led to the creation of things like food stamps and child nutrition assistance,” Greenfield said, referring to two federal programs. “We have a lot of hope for this.”

Met Council will focus on solutions to end world hunger, with an extra lens on ensuring that culturally appropriate food for both kosher and halal communities is included in any policy proposals.

The organization will also be showing off its digital food pantry technology that serves 50,000 people each month in New York.

Other Jewish groups will also take part in the conference, including Mazon, the anti-hunger group.

Greenfield said that hunger is “really a public policy choice at the end of the day,” citing as an example that child poverty numbers were cut in half during the pandemic owing to government funds made available to families.

“That was a tremendous success,” Greenfield said. “We could similarly do that with hunger.”

Greenfield said that with the country moving on from the pandemic, inflation has given way to a new challenge in feeding people during Rosh Hashanah.

“Speak to any working class family that goes shopping and they’ll tell you that the prices are really astronomical when it comes to the food,” Greenfield said.

Grocery prices have risen by 13.1% over the last year, according to the Bureau of Labor Statistics.

The price of common household items have increased dramatically when compared to last year — eggs are up 38%, flour is up 22.7%, milk is up 15.6% among many other items like chicken, ground beef, fruits and vegetables.

The poorest Jews in New York are haredi Orthodox families and Russian-speaking seniors, and Brooklyn is the center of Jewish poverty, according to a recent report by UJA-Federation. It found that 37% of Jewish adults in Brooklyn are either poor or near poor.

With government dollars dried up from the pandemic and other relief bills stuck in Congress, Met Council has once again called for an emergency fundraiser to help provide for families during the High Holidays. The organization aims to raise $2.2 million to distribute over $4 million worth of food from 126 locations in the New York area.

President Joe Biden announced the hunger conference in May, saying in a video that it will bring together anti-hunger and nutrition advocates, food companies, local and state governments and others to create a plan to “combat hunger and improve nutrition for every American.”

“Too many families don’t know where they’re going to get their next meal,” Biden said. “This time we make real change. I’m committed to taking bold steps that are going to help end hunger.”

Jessica Chait, the managing director of food programs at Met Council, told the New York Jewish Week that she is optimistic that the conference will lead to “affirmative movement” in reaching Biden’s goal to end hunger by 2030.

“I think it’s possible,” Chait said. “It takes significant commitment, coordination and resources. We can’t do it if we don’t start somewhere, and hopefully this conference will be a kick off for doing that.”