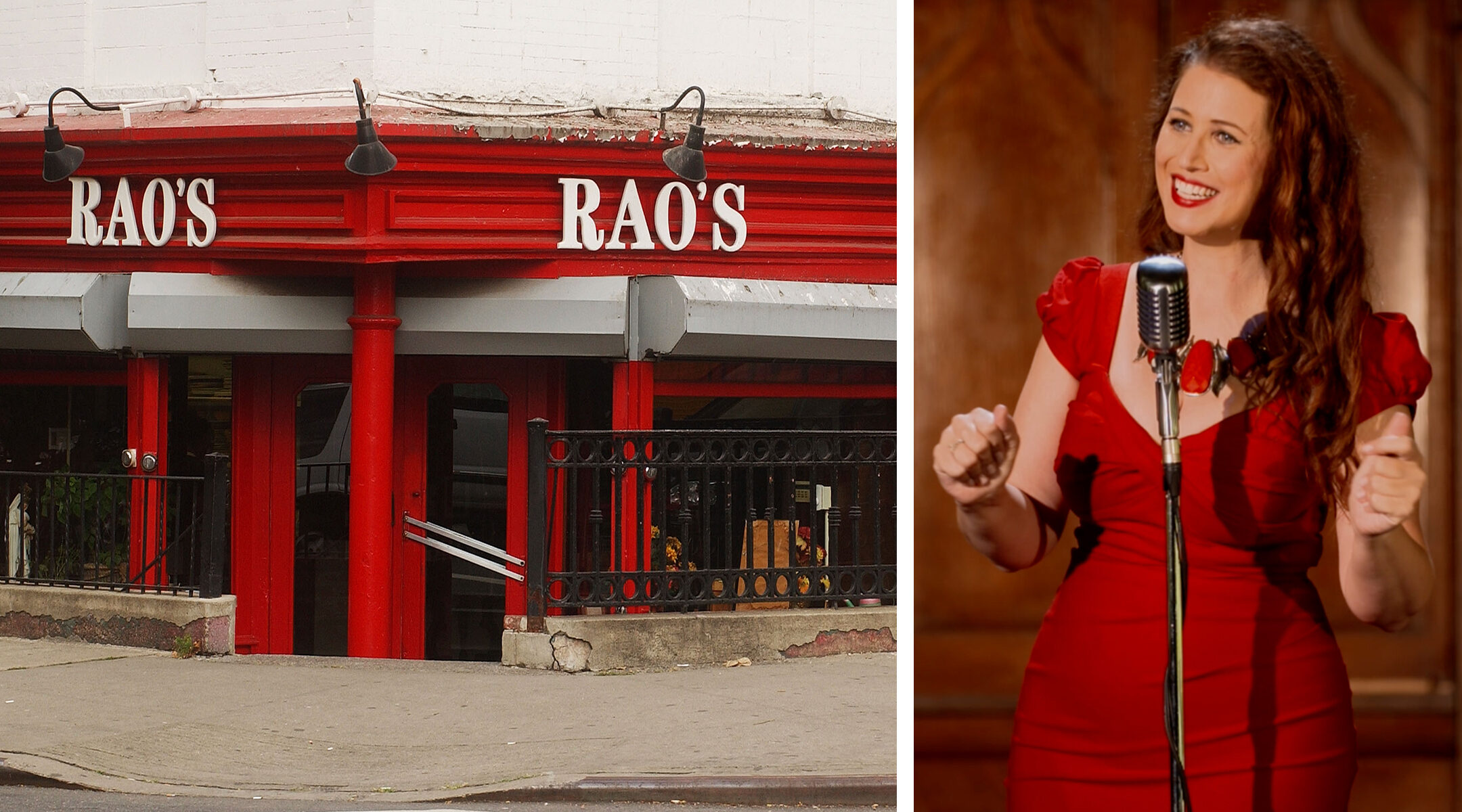 Rena Strober's "Spaghetti and Matzo Balls!" recounts how one violent night at Rao's restaurant changed the course of her life. (Mark Mainz/Getty Images and Courtesy of Rena Strober)
Advertisement

(New York Jewish Week) — On Dec. 22, 2003, a 20-something Jewish actress and singer named Rena Strober was doing what she did every Monday night: mingling with an A-list crowd at Rao’s, a notoriously exclusive Italian restaurant on East 114th Street. At the turn of the millennium, it was probably most famous for its impossible-to-get reservations.

Each week, Strober — as a guest of former NYPD-detective-turned-film-producer Sonny Grosso, who “owned” a Monday night table at the restaurant — schmoozed with the likes of Billy Joel, former President Bill Clinton and Martha Stewart. After dining on clams casino and lemon chicken, at some point in the evening, she’d stand by the jukebox and sing the “Funny Girl” belter “Don’t Rain on My Parade” to thunderous applause.

But this particular Monday evening was different than all of the others. Because this December evening, soon after Strober finished what had become known among Rao’s regulars as “her song,” gunshots broke out: Louis “Louie Lump Lump” Barrone, 67, shot and killed 37-year-old Albert Circelli, a “made man” with the Lucchese crime family — allegedly because Circelli had insulted Strober’s singing.

Overnight, Strober transformed from an up-and-coming Broadway actress — she had been part of the national touring company of “Les Miserables” — to front-page tabloid fodder. “Journalists were literally knocking at my door, trying to get an exclusive with ‘da singer from da mob hit,’” she recalls. “Late-night talk show hosts were making jokes about it in their opening monologues. I was hearing from people I hadn’t heard from in years.” (Many of these people, she adds, wanted her help in getting reservations at Rao’s.)

Now, 19 years later, Strober has transformed this traumatic, only-in-New-York experience into a lighthearted, musical and highly personal short film, “Spaghetti and Matzo Balls!” Inspired by her solo off-Broadway play by the same name, in this new 30-minute short, Strober mines her Jewish roots, showcases her singing talents and tells how that violent night at Rao’s led her on an unexpected path of self-discovery. It makes its online premiere on Sunday, Oct. 2.

The violent evening, and its aftermath, proved traumatic and transformative to Strober, who, as gunfire popped, dove under the table. Fearing for her life, she found herself audibly saying the Shema, the foundational prayer of Judaism — despite having rejected her Jewish identity in college because, as Stober, a theater major, puts it, “‘I pray to Stephen Sondheim.”

Strober, who had grown up in a kosher-keeping family near the Catskills, put the kibosh on her Monday nights at Rao’s, and, after struggling to resume her life in New York and as part of the “Les Miserables” tour, she eventually rekindled her connection to her Jewish identity.

These days, Strober, an actress and cantorial soloist, is a mom to a 5-year-old and lives in Los Angeles — though, she says, “I miss New York every day.” She is currently in cantorial school at the “transdenominational” Academy for Jewish Religion. Ahead of the “Spaghetti and Matzo Balls!” screening, the New York Jewish Week caught up with Strober to discuss her Jewish identity, what the Rao’s scene was like in the early 2000s, and how a single moment can change the course of an entire life.

New York Jewish Week: Looking back on that night at Rao’s, is there a clear “before” and “after” in your life?

Rena Strober: Yes, in so many ways. Emotionally, there was a lot of post-traumatic stress. I was being followed by the press — there was that. But then, after I got my bearings, I started to live life a little differently. I was very ballsy after that. I was like, “You know what? Life’s short. I’m just gonna do this. I’m gonna not be so worried about stuff.”

I went back on the road [with “Les Miserables”] because New York was very aggressive on me. It was very loud. And every audition I walked into, people just wanted me to talk about it: “Whoa, you were that girl? Oh my god.” And I was like, “But wait — I’m an actor.” So I left for a while, and that’s when I started going to synagogues and meeting all these people. And I didn’t suddenly become baal teshuva [newly religious], you know, but I sort of found my own way of being Jewish, because it brought me to a safe place.

Is there a direct connection between that evening and the way you see your Jewish identity today?

One hundred percent… I read somewhere that after you have a kid, your little DNA changes — like everything in you, your or your cells change. And I feel similarly [with my response] to trauma — my cells changed. Everything was different, how I looked out at the world, you know? I really shifted heavily and, and then, when I sent the original script to [the film’s director] Stuart [Robinson], he wrote back and said, “This whole thing is about the Shema.” And I was like, “What?” And he said, “That moment, when you said the Shema, that’s the entire story.” I was like, “Oh, you’re right — that is it.”

And then, I realized, when I do morning tefillah [prayers] at my daughter’s Hebrew school, we say the Shema. And I always talk about what it means to listen — and not just listen to the outside, but to listen to the inside. And it’s just crazy, when you think about that. Those are the words that I spoke that night, and then what happened in the many years after.

How did “Spaghetti and Matzo Balls!” evolve from a solo off-Broadway show into a short film?

When I went back on the road [with “Les Miserables”] I was dealing with all this PTSD. And I was like, “Where do I put it?” And then it just dawned on me: I was like, I have to tell my story … [Originally] it was a very different piece. It had a lot of the same ideas. But it was more about my nights at Rao’s, the cool people — it glossed over the shooting very quickly.

What is the message of the film?

What it takes to reconnect to who you are — whether it’s your religion, your sexuality, your identity, your belief system in general. It’s so cliche, but a lot of times it can take cancer, or the death of a loved one, or a trauma … I know a lot of people during COVID rediscovered their love of sourdough or rediscovered their love of music. So perhaps it was this universal trauma. My trauma happens within this crazy story. But I want people to be able to zoom out and then zoom back in on what it would take. Maybe it doesn’t need to take something [traumatic] like that for you to spend a moment to listen [to yourself]. It’s funny because “shema” means “listen.” Spending time, listening to what we need.. We all spent so many years in quarantine having to listen, and I think that’s why I wanted to do this now.

The Union of Reform Judaism is hosting the free online premiere of “Spaghetti and Matzo Balls!” — written by and starring Rena Strober and directed by Stuart K. Robinson — this Sunday, Oct. 2 at 7:30 p.m. Details and registration here.