Beanie Feldstein opens up on ‘Funny Girl’ role: ‘Incredibly meaningful for me as a Jewish woman’ 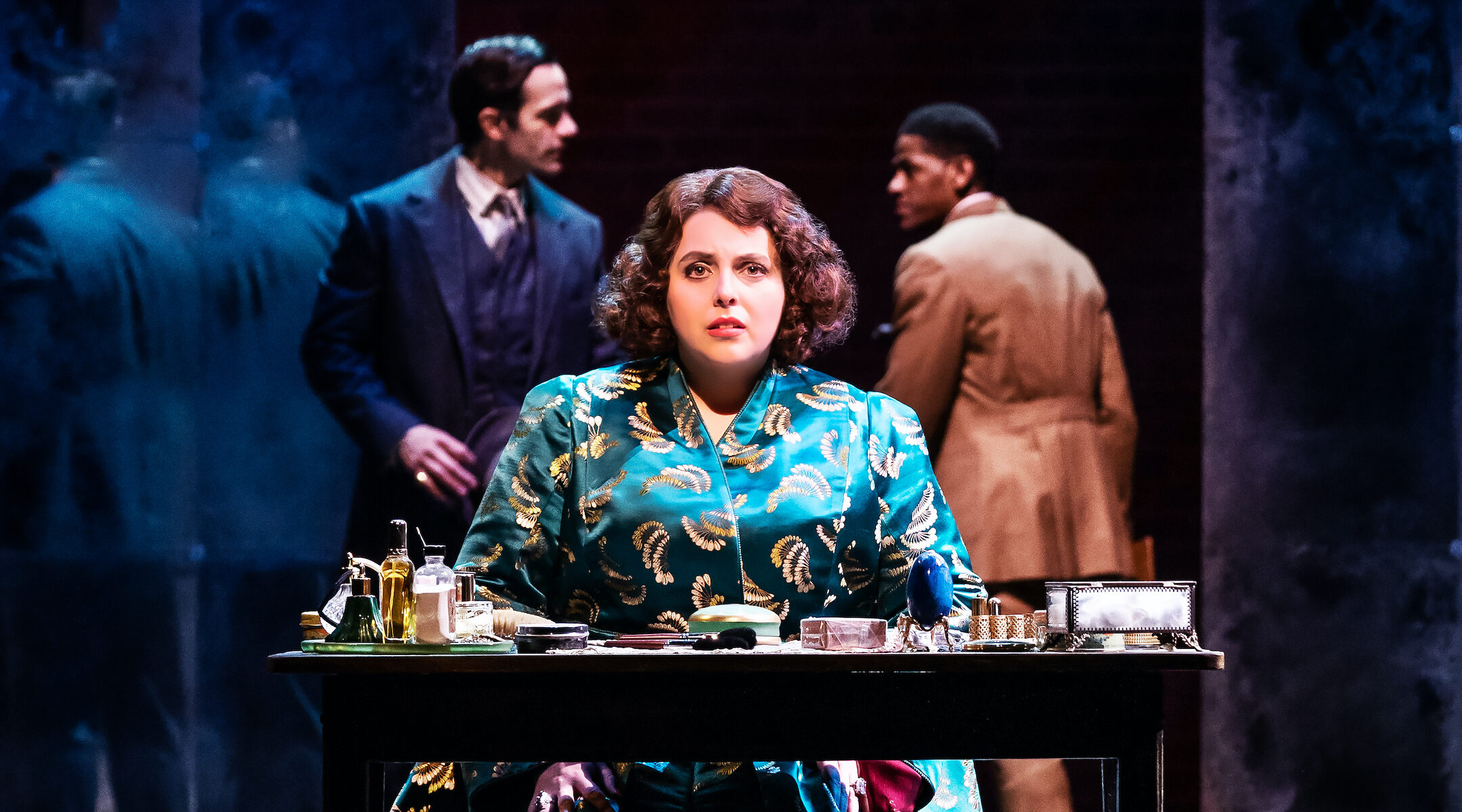 (New York Jewish Week) — “Funny Girl” is so deeply ingrained in Beanie Feldstein’s life that she doesn’t even remember the first time she watched the movie. “From my developmental psychology classes in college, I think I remember that your first memories are around 3 years old,” she told the New York Jewish Week. “Funny Girl” “precedes my memory. I’ve always loved it as far as I’m concerned.”

Even if she doesn’t recall all the details now, the 1968 movie — starring Barbra Streisand, who plays real-life Jewish vaudeville star and comedian Fanny Brice — made enough of an impression that Feldstein had a “Funny Girl”-themed birthday party when she turned 3, leopard-print costume and all.

Of course, now, in an incredible turn of events, Feldstein, 28 — known for movies like “Lady Bird” and “Booksmart” — is starring in the first-ever Broadway revival of “Funny Girl.” (The musical, which also starred Streisand, opened on Broadway in 1964 and ran for more than three years.)

What did such a young girl find appealing about a show about a strong-willed performer — with a story that also focuses on Brice’s rocky relationship with her suave, gambler husband, Nick Arnstein? “The biggest thing that impacted me was her ambition,” Feldstein said. “The character of Fanny Brice was so unrelenting in her pursuit of her own career and her love of her performing and I think, even at a young age, I really latched onto that.”

She was also drawn to the score, featuring songs like “Don’t Rain on My Parade,” “I’m the Greatest Star,” and “People,” all of which have become standards of the American songbook.

“Those songs have lasted in our hearts and our ears for almost 60 years now — and I’m sure they will continue to, forever,” Feldstein said. “You can’t hear the opening chords of ‘Don’t Rain on My Parade’ and have it not just course through your body — even now, night after night.”

Currently in previews, the show officially opens at the August Wilson Theatre on April 24. The New York Jewish Week spoke to Feldstein about her Jewish identity, perfectionism, and what it’s like to portray a Jewish icon who is so closely connected to another Jewish icon.

New York Jewish Week: What does it mean to you, as a Jewish woman, to get to play this role?

Feldstein: It’s such a big question, I could write a dissertation on it. But I truly believe that any Jewish woman who wants to be funny and perform and sing owes something to Fanny Brice. So, to get to play that trailblazing woman and bring her story back to Broadway 60 years after the original production, and over 100 years after she was a star herself, it’s all-encompassing and it’s very surreal and it’s incredibly moving because she opened a door that none of us could have walked through if it wasn’t for her. That’s a tremendous legacy. I think her legacy lives, of course, in Barbra Streisand, but [also] in people like Bette Midler and Sarah Silverman. Any of us who are bagels on plates full of onion rolls, we know that feeling and it’s very meaningful to me to get to bring her story back to 2022 Broadway audiences.

You mentioned Bette Midler, who you worked with in your Broadway debut in “Hello, Dolly!” in 2017.  What did you learn working with her?

So much. To get to work with Bette Midler any time in your life, but specifically in your early 20s in your Broadway debut, was incredibly formative. She never sits down. I mean that so literally. She is the most hardworking person in the room. And when you’re someone like Bette Midler and you have such a tremendous body of work and following and people just adore every word that comes out of your mouth, she didn’t have to work hard. She could have walked onstage and the audience would have been in the palm of her hand. But the reason that she’s as genius as she is, and as beloved, proves to me that she is that way because she puts in the work every minute of every day to make whatever she’s working on the best, the most funny, the most precise. She’s so detailed. That was such an incredible kind of master class to witness her work. And she’s also one of the funniest people you’ll ever be in a room with, so there’s that, too. 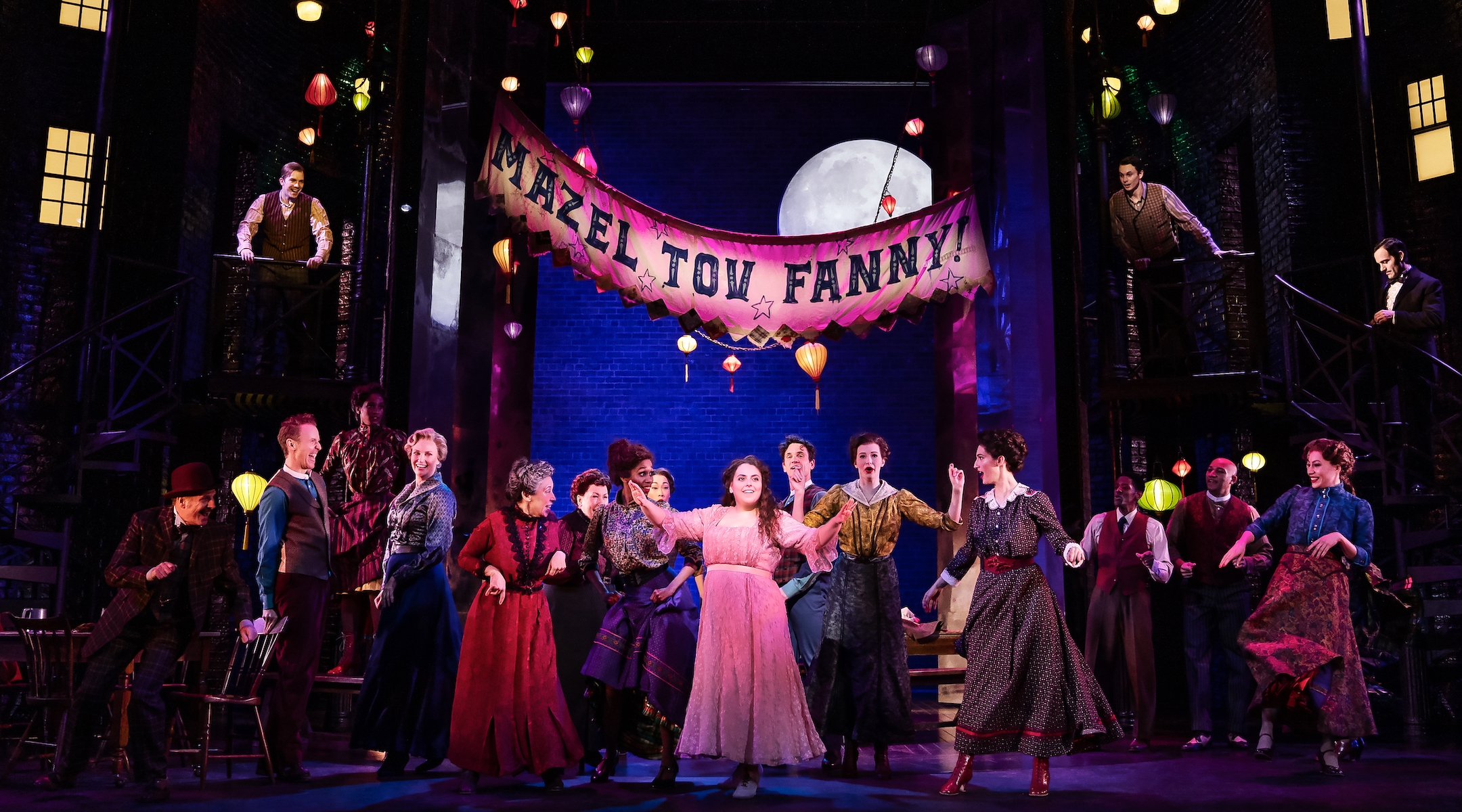 There has been a lot of talk lately about whether Jewish characters, especially women, should always be played by Jews. Do you have thoughts on this?

Again, I think it’s too big of a conversation to answer in three or four sentences. I was a sociology major in college, so I could write 15 academic articles about the topic. There’s so much to say. I’m playing Fanny Brice and I just finished playing Monica Lewinsky [in “Impeachment: American Crime Story”] and I think for me, as a Jewish woman, it’s been very meaningful to play Jewish women in history. And I love and cherish that we’ve added a lot of Yiddish to the show. The fact that I’m on a Broadway stage dancing under a huge banner that says “Mazel tov, Fanny!” is for me, as a Jewish woman, very meaningful and fulfilling and emotional and special. I think to get to play one of the most tremendous Jewish women in our history, especially entertainment history, is incredibly meaningful for me as a Jewish woman.

I was a junior cantor. Not to flex, but I was a junior cantor. I grew up going to a Reform synagogue [Temple Emanuel of Beverly Hills] in West L.A. and I became very close with my cantor. I’m still very close to him, Cantor Yonah Kliger. And he has always been a beautiful mentor in my life. Obviously, I love to sing. I grew up singing, so he quickly kind of roped me into doing a lot of singing with him at shul. We used to sing before I went away to college [at Wesleyan University]. We used to sing “Sim Shalom” every year during the High Holiday services. I do remember the day before my bat mitzvah, he was like, “Beanie, I really think that when you’re older you should become a cantor,” and I remember looking at him and just shaking my head and I was like, “I’m so sorry to disappoint you, but I want to be an actor.” My path as a cantor ended very soon. But I was always very close to him so he’s a wonderful influence in my life. I’m very culturally Jewish. And always singing in different ways at synagogue.

Do you feel a lot of pressure since this is the first Broadway revival of “Funny Girl” and if so, how are you dealing with that?

I mean how could you not? I’d like to meet the person who wouldn’t be feeling the pressure. But I think I’d feel that way in any job. I hold myself to really high standards and I’m a perfectionist and I always want to do my absolute best. I’m unrelenting in that pursuit and I’m very focused and committed. I felt that way about “Hello, Dolly!” I feel that way about any opportunity. So then, of course, when you layer on the fact that I’m leading a Broadway show for the first time and then the fact that it’s “Funny Girl,” of course there’s added expectations and pressure, whatever word you want to use. But I think I just have to focus on my company of actors and our crew offstage and I think it’s such an extraordinary group of people. Whenever I get nervous, I look at Ramin [Karimloo], who plays Nick Arnstein, or I look at Jared [Grimes] who plays Eddie. I look at my incredible company of collaborators and I feel so safe.

Do you think because you know the original so well, does that make it easier or more difficult to make it your own?

In some ways I think I do and I don’t because I really know it through a child’s eyes. I think the last time I watched it was when I was a junior in college. My roommate and one of my dearest friends admitted she had never seen it and we watched it. But I haven’t seen it since then. I didn’t rewatch it between then and when I got the audition. And then, once I got the audition, I knew that I couldn’t watch it. I had to approach it as if it was brand new material, as if I was a person who was like what “Funny Girl” is about and I’ve never heard this song “People” before. I really tried to approach it like that because I knew that if I was going to do this, I had to do this my way and just bring my own bagelness, if you will, to the role. What I love so much about Fanny is she knows she can only be herself, so I knew in order to play the role I had to approach it that way.