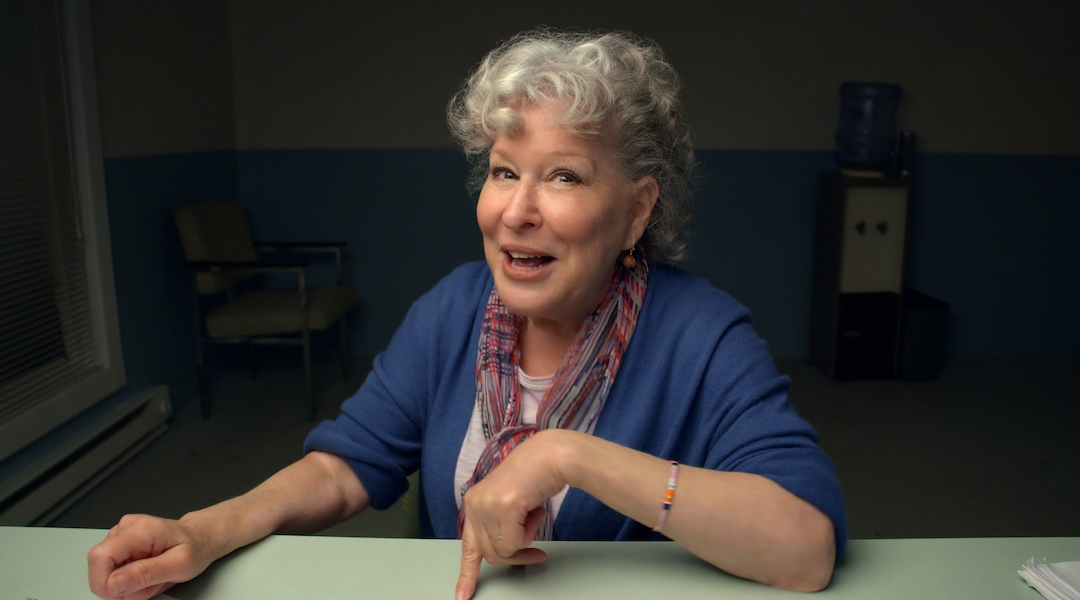 (JTA) — HBO debuts playwright Paul Rudnick’s “socially distanced satire” film “Coastal Elites” on Saturday — and the star of the show is Bette Midler, whose Jewish character symbolizes the divide between America’s liberal cities and its heartland.

The film is built on five remotely filmed monologues from characters based in either New York or Los Angeles during the COVID-19 pandemic.

Midler plays Miriam Nessler, a retired New York City school teacher who may be the quintessential coastal elite. And one who is unapologetically Jewish, who also gets arrested for taking a red Make America Great Again hat off of a pedestrian on the street and running away with it.

“He’s wearing jeans and a windbreaker, and the hat — the red hat. You know the one. The MAGA hat. In New York City, two blocks from the Public Theater,” Nessler says of the hat-wearer. “It’s like me going to Nebraska, wearing a yarmulke, waving a rainbow flag while reading a book!”

Despite her words, Nessler doesn’t quite look down at the rest of the country. But the truth is that she is by self-definition “a liberal Jewish woman. On the census, where it says religion, I don’t put down Jewish. I put down the New York Times.”

To clarify, the print edition.

“Reading the Times online is like having sex with a robot. It’s cleaner and faster, but you can tell the difference. New York Times online is for gentiles,” Nessler says.

The other characters are Mark Hesterman (played by Jewish actor Dan Levy), a gay actor auditioning to play the first gay super hero in a big movie; Callie Josephson (Isa Rae), a wealthy black woman who went to private school with Ivanka Trump; Clarissa Montgomery (Sarah Paulson), a woman who creates meditation videos; and Sharynn Tarrows (Kaitlyn Dever), a nurse from Wyoming who comes to New York to help during the pandemic.

Besides the very funny jokes, at at the center of “Coastal Elites” is a sense of wariness, an unease because after all this time, after all the news, there is a national divide over something where there should be unity.

Rudnick noticed about a year ago that “everybody I knew on every side of the political divide was in a permanent state of anger and heart break over the future of the country.” “Coastal Elites” is the result of that feeling.

He was raised in a Jewish household, attended Hebrew school, had a bar mitzvah, but it was primarily “cultural Jewish.  We’d focus on the Jewish traditions education and culture and civic responsibility.” At dinner the family would discuss what was in the Times that morning and on that night. His parents, he says, “were very good liberals and also deeply curious. And they emphasized real engagement in life.”

Rudnick, who has written other screenplays, plays, and novels, says he is “grateful for that great Jewish comic tradition, a way of speaking that’s wry and skeptical and loving, all at the same time, which is nuts and doesn’t make any sense at all.”