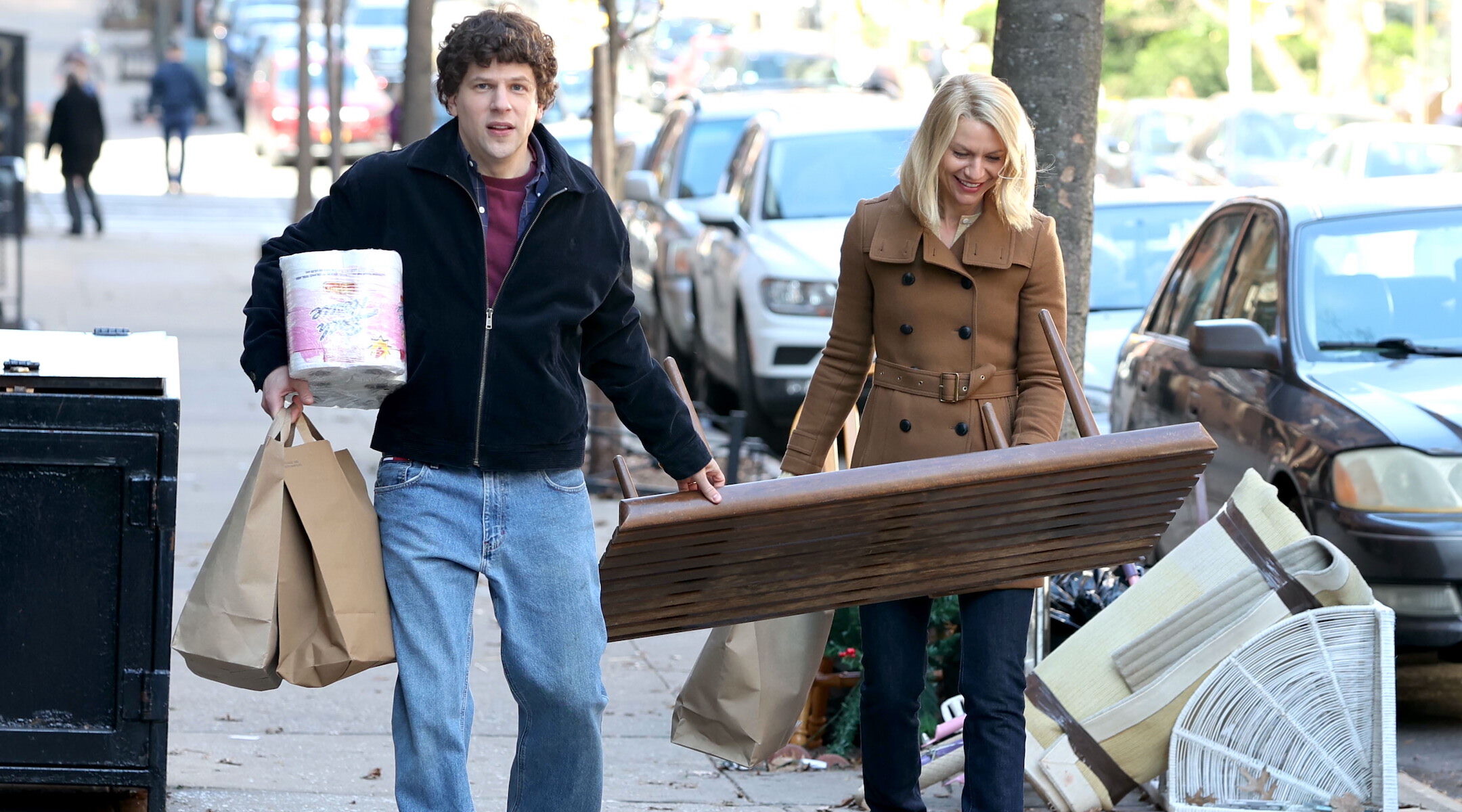 Jesse Eisenberg and Claire Danes are seen filming on the set of "Fleishman is in Trouble" on March 21, 2022 in New York City. (Jose Perez/Bauer-Griffin/GC Images)
Advertisement

(New York Jewish Week) – A new trailer for the FX miniseries “Fleishman Is in Trouble” — based on Taffy Brodesser-Akner’s debut novel and set on a very Jewish Upper East Side milieu — dropped Tuesday.

Jesse Eisenberg, Claire Danes, Adam Brody and Lizzy Caplan star in the dramedy, which will air next month. The book, an examination of a couple’s divorce from various angles, was described by a reviewer as “inher­ent­ly Jew­ish, with inti­mate knowl­edge of the com­mu­ni­ty woven through­out that can only be por­trayed by some­one right inside of it.”

Brodesser-Akner, who is known for her celebrity profiles, wrote the novel while she was a staff writer for the New York Times Magazine. During production of the mini-series, Brodesser-Akner, 46, frequently posted updates and snapshots of the cast and crew on Twitter from behind-the-scenes of filming. (Brodesser-Akner was also one of The New York Jewish Week’s “36 to Watch” in 2022.)

In the trailer, a narrator voices over the events of Toby Fleishman (Eisenberg), a disgruntled, middle-aged doctor in New York who is navigating a challenging divorce from his ex-wife Rachel (Danes), who, at the onset, has dropped their kids off at Toby’s house with no warning and leaving no way to contact her.

“Many thoughts had crossed Toby’s mind in the hours since he was informed that his ex-wife dropped the kid’s off a full day earlier than expected,” the voiceover says as shots from the show are spliced on screen. “Toby was forced to ask the question that occurred to him nearly every few minutes since his separation: ‘How did I get here?’”

Alongside Toby are two of his oldest friends, Seth (Brody) and Libby (Caplan), who also doubles as the show’s narrator.

“This is a story about everything,” Caplan narrates in the trailer. “It’s about life, and marriage, and how young love can become old resentment, and money, and dissatisfaction, and jealousy, ambition, career, parenting, nostalgia and lifelong friendship.”

Of the four main actors featured in the trailer, Eisenberg, Caplan and Brody are all Jewish.

The first two episodes of the eight-episode series will air November 17, with subsequent episodes releasing one per week. The show will stream exclusively on Hulu.