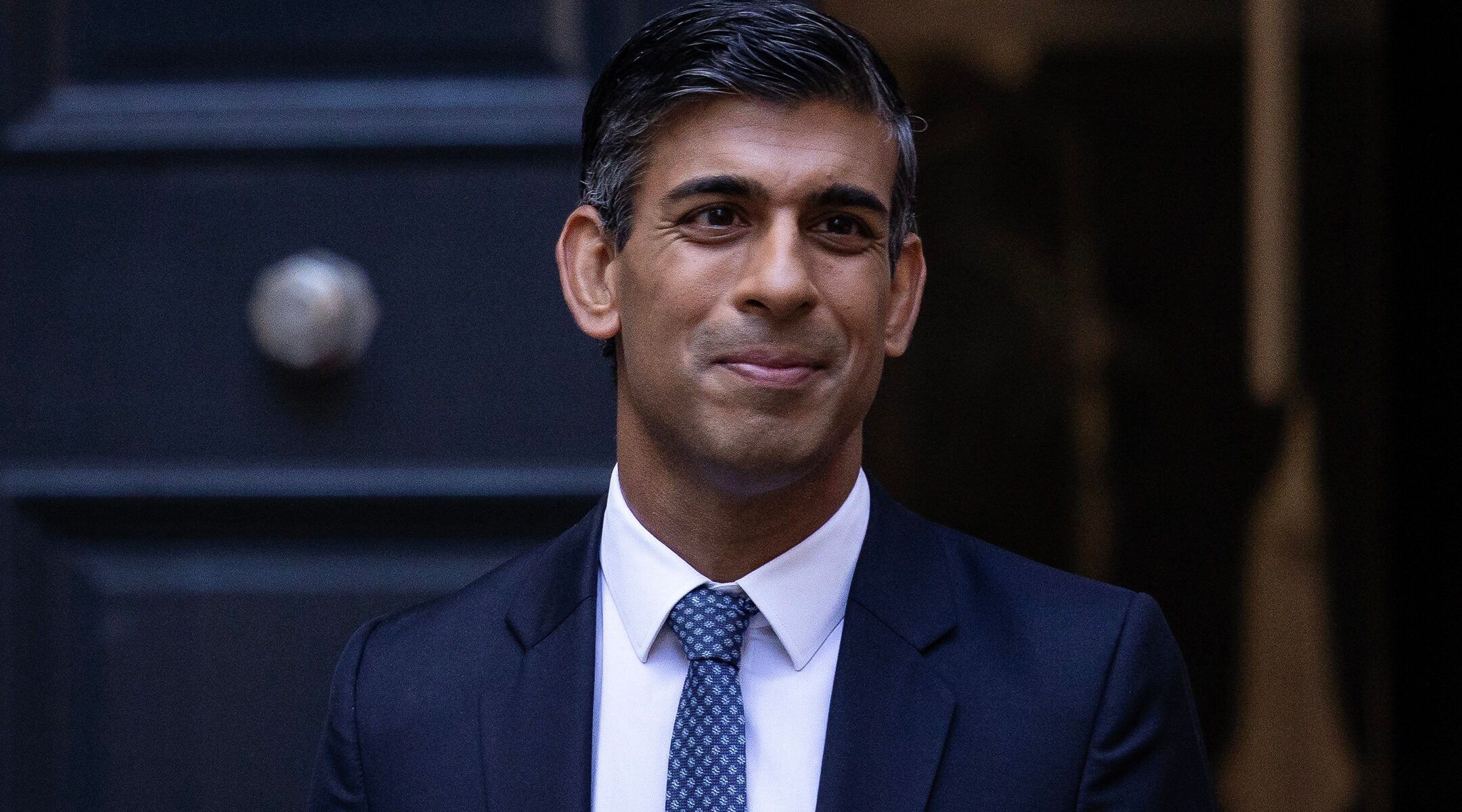 (JTA) — The past few years have been tumultuous at 10 Downing St., the residence of the British prime minister in London. Last week, Liz Truss, who lasted just over six weeks in the role, became the third prime minister to resign since 2019.

But the succession of Conservative Party leaders has kept some things steady: they have all had strong ties with mainstream British Jewry and professed a right-leaning foreign policy that is staunchly pro-Israel and hawkish on its enemies in the region.

Rishi Sunak, a former treasury secretary and the United Kingdom’s first-ever person of color to assume the role when he was elected by his party on Monday, continues that trend.

In fact, Sunak has shown a willingness to discuss moving Britain’s Israeli embassy to Jerusalem — a move that has historically been shunned across the U.K.’s political spectrum, including by Conservatives.

Speaking at a Conservative Friends of Israel event in August, he said there is a “very strong case” for the move, which would imply the U.K.’s recognition of Jerusalem as Israel’s capital. Although former President Donald Trump’s administration moved the U.S. embassy to Jerusalem and inspired other countries to follow suit, much of the international foreign policy establishment opposes argues that the shift disrupts the Israeli-Palestinian peace process and hinders the eventuality of a Palestinian state.

Sunak admitted that he would face strong opposition to an embassy move from within and beyond his own party. After Truss’ economic policies worsened an already ballooning inflation crisis, Sunak will likely first look to tackle domestic concerns in the early part of his tenure.

Sunak seems to belong to a new generation of Conservative Party leaders who have shown themselves willing to diverge with the decades-long policies of the kingdom’s foreign office, which is widely perceived to favor keeping Israel at arm’s length not to anger the Arab World. Prince William ended what was perceived as a decades-long unofficial boycott on official visits to Israel by senior members of the British Royal House in 2018. The government of Theresa May, predecessor to Boris Johnson, had a central role in facilitating the visit.

In an interview in August with the Jewish Chronicle of London, Sunak — a former hedge fund manager who has amassed with his wife (daughter of the founder of Infosys, an Indian IT giant) a fortune of hundreds of millions of dollars — rejected claims that Israel is an apartheid state, as several human rights groups have called it in recent years.

“The apartheid claim is not only factually incorrect but quite frankly offensive. Like any nation, Israel is not perfect — but it is a vibrant multi-ethnic democracy with a free press and the rule of law. It stands as a shining beacon of hope in a region of autocracies and religious extremists,” Sunak said.

Sunak’s family has firsthand knowledge of colonialism in Africa. He was born in Southampton, a city situated about 70 miles southwest of London, but his father, a physician, was born in Kenya, and his mother, a pharmacist, was born in Tanzania. East Africa was formerly home to a robust minority of ethnic Indians, Pakistanis and other Southeast Asians who settled there when those countries were part of the British Empire, which also comprised their ancestral lands in Asia. Sunak’s parents moved to Southampton, which has a sizable South Asian minority, in the 1960s.

The Abraham Accords, which since 2020 has established diplomatic relations between Israel, the United Arab Emirates, Morocco and Bahrain, “proved that peace between Israel and her Arab neighbors is possible,” and have” demonstrated the tremendous benefits that normalization brings,” Sunak told the Chronicle. Britain, he added, “is in a strong position to leverage its historic relationships with other Gulf states to widen the Accords and I would like to see UK diplomats place a greater focus on this.”

At home, Sunak has supported plans to erect a large Holocaust museum near the parliament building in London. He has also expressed concerns over antisemitism and voiced his support for funding Jewish community security groups.

Sunak, who is Hindu, is additionally the first non-Christian in the PM role — taking into account that Benjamin Disraeli, who served two prime minister terms in the 19th century, converted from Judaism to Anglicanism as a child with his family. Sunak’s ascendance has been widely celebrated in India.

Sunak’s election has “enormous importance to Jews who can see someone from a minority, who has religious observance, as prime minister,” Jonathan Sacerdoti, a British journalist who writes regularly on antisemitism, told Jewish Insider.

“There are familiarities between the two faiths that those two faith groups will recognize, and it is encouraging to the Jewish community that he will have appreciation of what it is to grow up in Britain as a Briton but with an identity of part of a minority religious and ethnic group,” he said.