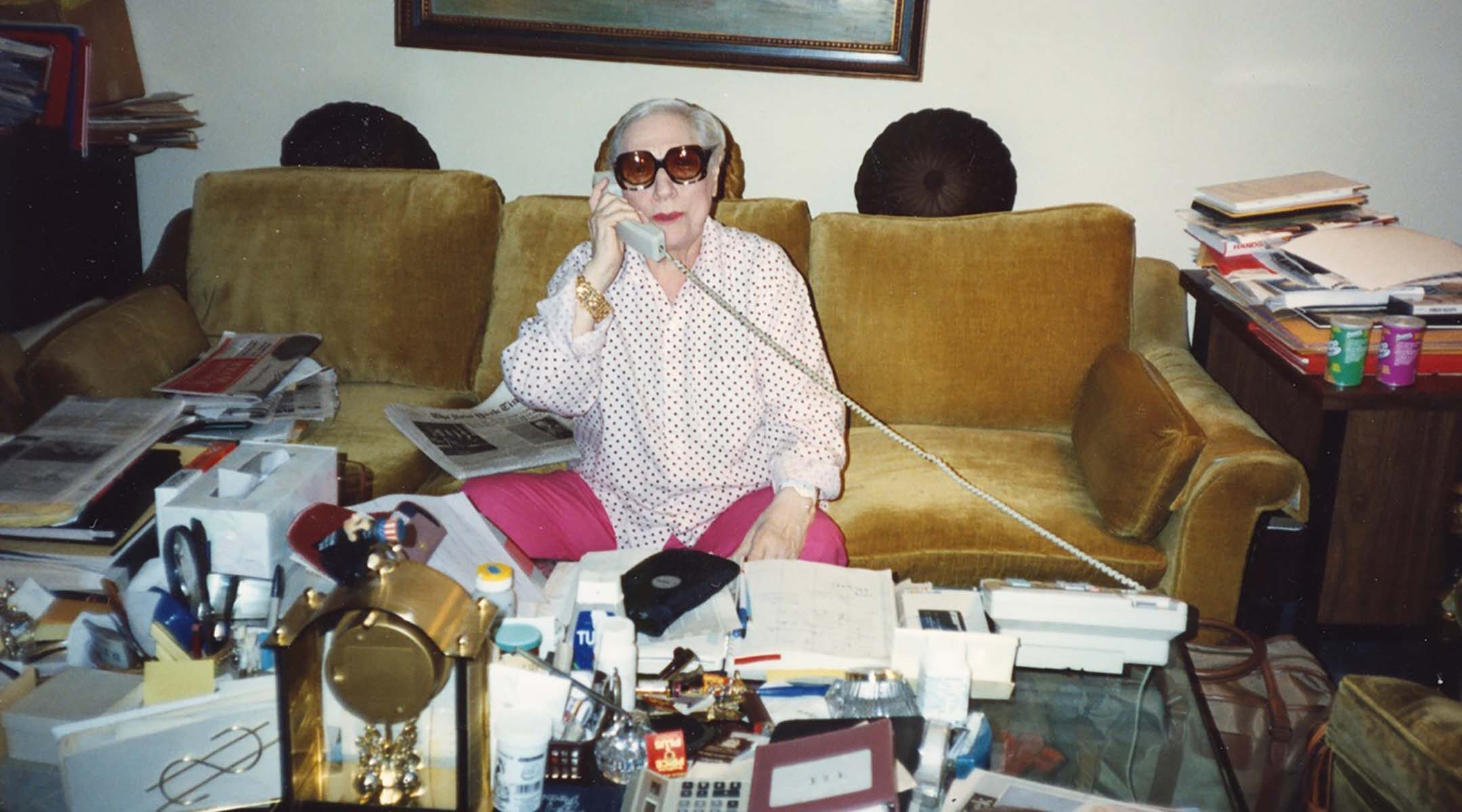 So begins Valerie Kontakos’ documentary, “Queen of the Deuce,” which tells the unlikely story of how a tough-as-nails Jewish lesbian narrowly escaped the Holocaust in Greece and became the successful owner of several pornographic movie theaters in New York City in the the 1970s. The documentary, which premieres in New York on Friday, Nov. 11, is one of several Jewish films playing the documentary film festival DOC NYC, which runs this year from Nov. 9 through Nov. 27.

Born in 1908, Wilson grew up in a religious Sephardic family in Thessaloniki — also known as Salonika in Judeo-Spanish — and was ambitious from a young age. “She had this fierce desire to achieve something,” said Kontakos. “When she was younger, she wanted to be a doctor. But of course that wasn’t an option for her at that point, and given her circumstances, given the fact that she was a Jewish Sephardic woman in Salonika. She came from a very conservative community.”

Relying on a mix of archival footage, interviews and animated sequences, “Queen of the Deuce” is a wide-ranging look at Wilson’s improbable life: her various business ventures, her marriages to men and romances with women, the pain of the loss of her family and more. Central to the film are Wilson’s now-grown grandchildren, who describe their unconventional Jewish grandmother as tough and eccentric, with the confident body language of a mob boss. (Wilson, who died in 1994, appears in the film through home videos.)

As a young woman, Wilson left Athens just before the outbreak of World War II, narrowly escaping the devastating destruction of Thessaloniki’s Jewish community. According to Yad Vashem, out of the approximate 56,000 Jews who lived in Thessaloniki before the war, some 54,000 were killed in the Holocaust.

Wilson got her start in New York selling hot dogs and soda. She sent some of her earnings to Greece to buy newsreel footage and turned the footage into a film called “Greece on the March” — an effort to raise money in the U.S. for the Greek war effort against the Germans. When she played the film at a New York movie theater she met a Jewish film projectionist named Rex Wilson. Although they lacked a common language, he became her second husband.

“He was nice,” Wilson says of Rex in her husky, accented voice. “He provided me with cigarettes.”

(Her first husband, whom she divorced after having two children, Paulette and Dino, was the product of an arranged marriage in Greece. Wilson compares his kisses to “torture” in the film. Later in her life, after Wilson and her second husband split up, her preference for women became an open secret.)

From there, Wilson fell into the movie theater business — first “regular” movies, and then, by the late 1960s, sensing opportunity, she became the owner of several adult movie theaters. Many of them were located on 42nd Street, nicknamed “the Deuce,” which was New York’s infamously gritty red light district at the time. 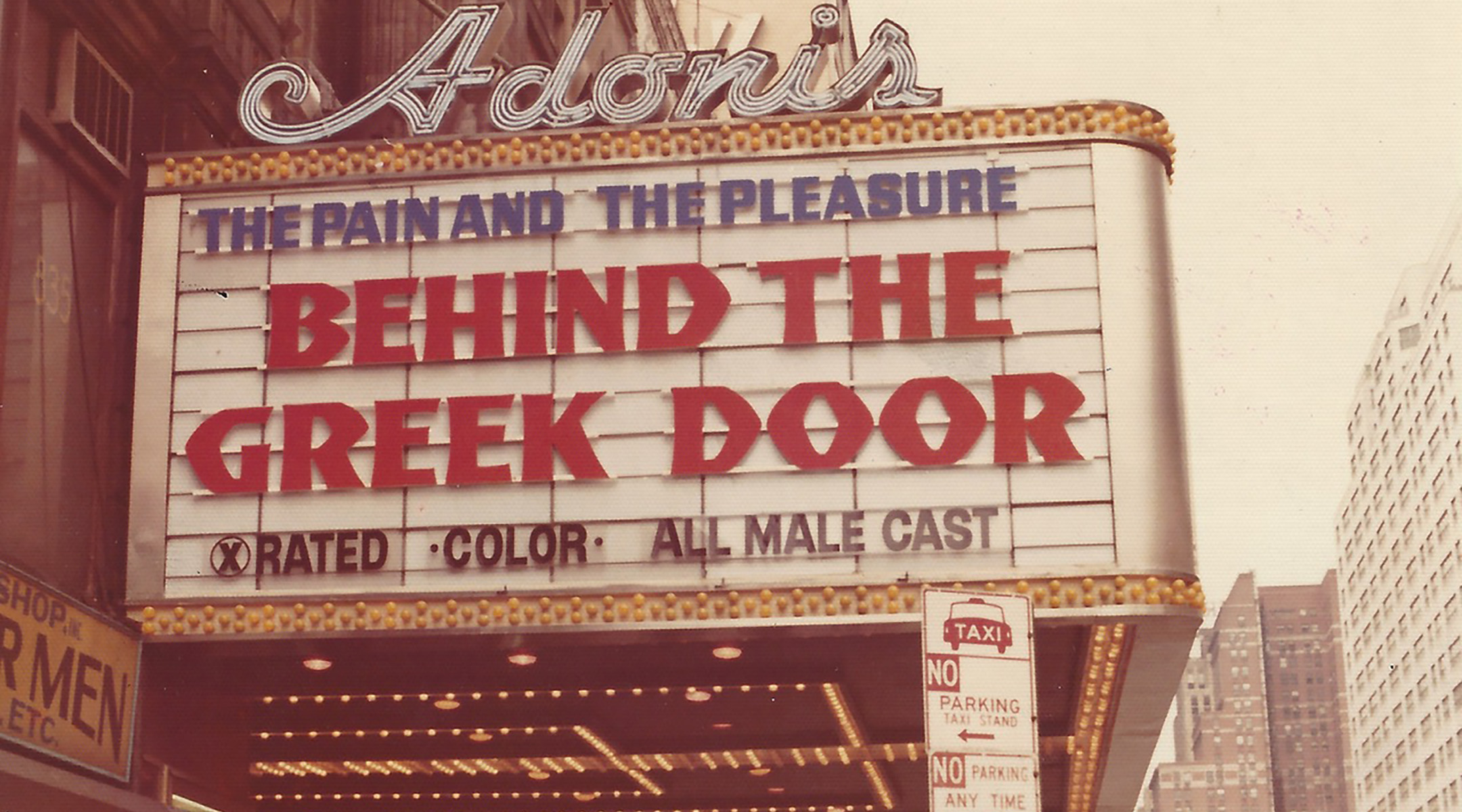 The Adonis Theater marquee, as seen in “Queen of the Deuce.” (Courtesy of the Wilson family)

In family footage shown in the film, she puffs a cigarette and tells stories in imperfect, Greek-accented English of how she smuggled her children to New York from Palestine and Greece. “I had Dino stolen from Israel, you know?” she says, reclining on her couch in a red silk robe. The story that unfolds is an improbable one, involving secret boat rides, misbehaving children and a chance encounter with a sympathetic official in Athens.

Similar to the fate of Thessaloniki’s Jews, most of Wilson’s family died in the Holocaust. But her shrewdness had saved Paulette: Before she departed for the United States in 1939, Wilson left her daughter in the care of a non-Jewish Greek family — with the specific instructions not to turn her over to her Jewish relatives, even if they came looking for her (which, of course, they did).

Still, Wilson kept her difficult past mostly hidden from her children and grandchildren. And in the film’s interviews, her offspring express the pain of their lost family and histories. They remember that Wilson refused to seek out reparations for her murdered family, saying it was blood money.

For Kontakos, it was important to tell this Holocaust story well, noting that the history the persecution of Greek Jews isn’t as well known as other European Jews. “I do feel it’s still not really discussed as openly as it should be,” she said.

Though Wilson may not have been the warm, nurturing type, she had a fierce dedication to her family, and her children and grandchildren reminisce in the film about her creative spirit and zest for life. Kontakos hopes audiences walk away from the film with a sense of “the joy of life, regardless of the hardships,” she said.

“Queen of the Deuce” is screening in New York on Friday, Nov. 11 and Saturday, Nov. 12 as part of the DOC NYC film festival, and will be available for online streaming Nov. 12 through Nov. 27. For details, click here.