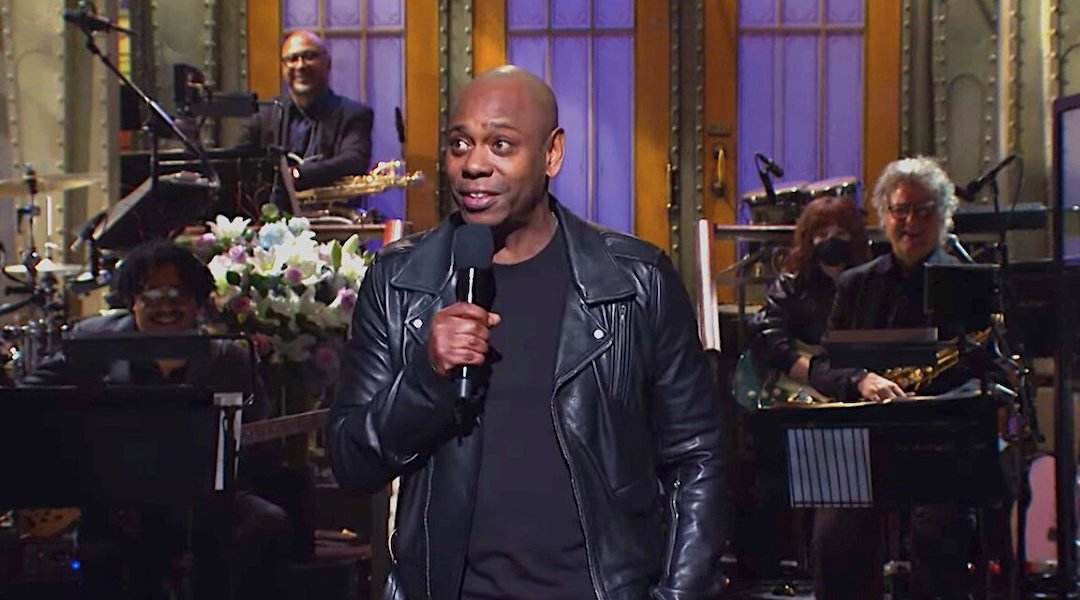 In the monologue, Chappelle danced along the lines he was mocking, emphasizing that he was not antisemitic while arguing that “it’s not a crazy thing to think” that Jews control Hollywood and insinuating that Jews have been making Black people into scapegoats for their past trauma.

Reaction from the audience featured ample laughter, although one joke landed in silence; online, criticism mounted immediately, with Time Out New York’s theater critic tweeting: “That Dave Chappelle SNL monologue probably did more to normalize anti-Semitism than anything Kanye said.”

In an unusually charged appearance for an “SNL” host — with rumors that some of the show’s writers might boycott in protest — Chappelle also appeared to address his own near-cancellation by analyzing the public and corporate backlash against West.

At the start of the routine, Chappele unfolded a small piece of paper and read from it, saying, “‘I denounce antisemitism in all its forms. And I stand with my friends in the Jewish community.’ And that, Kanye, is how you buy yourself some time.”

He then went on to explain that, over his 35-year career in comedy, he has come to learn that there are “two words in the English language that you should never say together in sequence: ‘The’ and ‘Jews.’” He then mocked West’s threat to go “death con 3” on Jews and the rapper’s boast that Adidas, his erstwhile corporate partner, would not dare sever ties with him. The sneaker company broke ties with West days later.

“Ironically, Adidas was founded by Nazis,” said Chappelle, “and they were offended. I guess the student surpassed the teacher.”

Chappelle, an African-American who often satirizes the Black community while at the same time mocking the serious and casual racism of whites, performed a similar tightrope act in dissecting West’s antisemitism.

“I’ve been to Hollywood and — no one get mad at me — I’m just telling you what I saw,” he said, adding a signature pause. “It’s a lot of Jews. Like a lot.” As the audience at NBC’s Manhattan studio laughed nervously, he quickly added, “But that doesn’t mean anything! You know what I mean? Because there are a lot of Black people in Ferguson, Missouri, it doesn’t mean we run the place.”

That joked echoed a familiar line of Jewish defense groups, who are often at pains to point out that a disproportionate Jewish presence in an industry is not an indication of a conspiracy — an age-old canard.

But Chappelle leaned harder into the joke, leading some reports on the monologue to suggest that he was justifying and defending West’s antisemitism.

Chappelle also alluded to a similar controversy surrounding Kyrie Irving, star of the NBA’s Brooklyn Nets, who was suspended after tweeting about a film that promotes a series of antisemitic canards.

“Kanye got in so much trouble that Kyrie got in trouble,” Chappelle said. “This is where I draw the line. I know the Jewish people have been through terrible things all over the world, but you can’t blame that on Black Americans.” The line was met with silence, until a single audience member was heard to hoot approval. “Thanks, the one person that said ‘woo.’”

Chappelle closed what for SNL was an unusually long opening monologue by seeming to allude to “cancel culture” and the controversy that swirled around his own comedy and charges that he is transphobic.

“It shouldn’t be this scary to talk about anything,” he concluded. “It’s making my job incredibly difficult. And to be honest with you, I’m sick of talking to a crowd like this. I love you to death and I thank you for your support. And I hope they don’t take anything away from me… whoever they are.”

Snap reaction to Chappelle’s routine was mixed. In addition to the tweet by Adam Feldman, Time Out New York’s theater critic, the Jerusalem Post accused the comedian of “engaging in antisemitic tropes.” Screenwriter Amalia Levari tweeted, disapprovingly, “So cool that SNL gave Chappelle the stage to deliver a TED Talk about how antisemitic dog-whistles are good, actually.”

Ari Ingel, who heads Creative Community For Peace, a group that fights antisemitism and other forms of bigotry in the entertainment industry, appeared more forgiving. “Some people will be offended at some of his monologue, but sometimes you just need to laugh,” he tweeted.

Rabbi Josh Yuter, an influencer on Jewish Twitter, wrote: “As I understood Chappelle’s monologue, the key point is that there are double standards regarding who can say what about whom. If my Twitter feed is any indication, everyone agrees this is a problem though there’s rampant disagreement over the details.”

Last week, the Irving controversy was also mentioned in the show’s “Weekend Update” segment, when mock newscaster Michael Che said that Irving met with the Anti-Defamation League and said that “from now on he would pretend to not be antisemitic.”