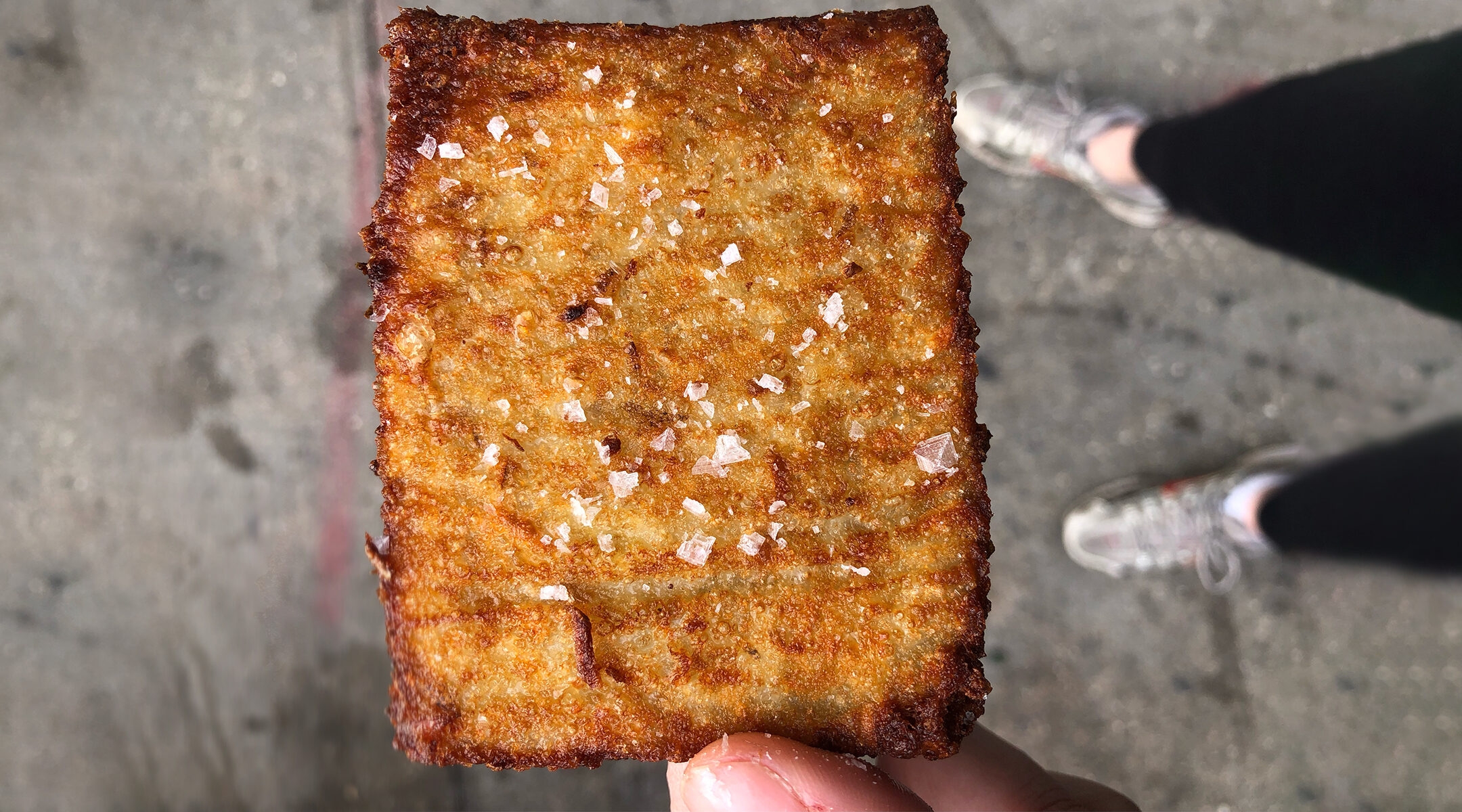 (New York Jewish Week) — At Edith’s Sandwich Counter, a Jewish sandwich shop in Williamsburg, Brooklyn, the most popular bagel sandwich is their bacon-egg-cheese-latke (BECL) combo. Each element of the sandwich’s filling is made to order: crispy bacon, an omelet cooked in an individually-sized tamagoyaki pan, topped with sharp cheddar and a freshly fried latke.

Since opening as a brick and mortar store in spring of 2021, the BECL has become Edith’s most popular bagel sandwich — and demand for the latke as a stand-alone side dish is high, too. This presented a challenge: As anyone who’s ever hosted a Hanukkah party knows, cranking out those fresh, crispy latkes, one at a time, had become challenging. They sell thousands of latkes a week.

“It was getting harder and harder for us to keep up,” owner and founder Elyssa Heller told the New York Jewish Week. “I wanted to find a way to improve the quality of our latke and use our growth as a vehicle for getting better.”

Enter Heller’s invention: the rectangular latke. While Edith’s does not serve traditional Jewish deli food (see crispy bacon, above), they do take historical elements of how Jews ate throughout the Diaspora and incorporate them into their menu. After doing some research, Heller determined that what makes a latke a latke is not its circular shape (which it assumes when the batter is dropped by the spoonful into oil), but that the potatoes are mixed in an egg batter and then fried.

Case in point: The name alone, “latke,” simply means “little oily,” according to Gil Marks’s “The Encyclopedia of Jewish Food.” In other words, a latke is about the oil, not the ingredients nor the shape. “Every food has a standard of identity, characteristics that define it,” said Heller. “Nothing was ever mentioned about a latke needing to be round. As opposed to round challah on Rosh Hashanah, which represents the cycle of life, the shape of the latke has no symbolic meaning.”

In other words, a latke is still a latke even if its shape fits in the box.

Here’s how they do it: The latke batter — which consists of Yukon Gold potatoes, onions, eggs, potato starch and matzah meal — is poured into a large sheet pan and par-baked so that it is 80% done and keeps its shape when cut. The giant latke is then cut into rectangles, the same size and shape as the omelet it sits atop in the bagel sandwich. Then, when an order comes in, the almost ready-to-eat latke is fried and served piping hot.

The resulting sandwich, in which egg and latke match in size, is Instagram-worthy —  an essential requirement in the food world of today. And, just as important, the diner gets a bite of latke with each bite of egg.

Diners are delighted by the results: Comments on Instagram range from “this is the innovation we need” to “I want those crispy corners.” At the same time, they don’t seem particularly surprised. “People know that, here at Edith’s, we do things our own way while honoring traditions,” Heller said.

(You may be thinking, “Aren’t the hash browns at McDonald’s essentially a rectangular fried latke?” True, the fast food giant has been selling rectangular-shaped portable potatoes for more than 40 years, but again: A latke is typically made with an egg batter; hash browns are not.)

Heller, who also owns Edith’s Eatery & Grocery, a sister establishment to the sandwich counter, founded both places to make good Jewish food accessible all year long — not just for the holidays. The latkes, based on Heller’s grandmother’s recipe, are on the menu 365 days of the year. Their BECL comes on Edith’s signature twisted bagel for $13.50; if you want just the latke, you can have that for $2.75 (add $1.25 if you want it topped with creme fraiche).

For Hanukkah — which starts this year on the evening of Sunday, Dec. 18 —  Edith’s Sandwich Counter and Edith’s Eatery & Grocery will be preparing their new rectangular latke, which will be accompanied by a choice of ketchup, hot sauce, apple sauce or creme fraiche. They will also serve braised brisket and jelly donuts, although the team at Edith’s has not yet determined the jelly flavors they will use.

In the spirit of “intellectually driven food” that Heller espouses, Edith’s also has a Russian cheese pancake, syrniki, on the menu. It is similar to the cheese pancakes that Jews in Eastern Europe prepared for Hanukkah before potato cultivation became widespread there starting in 1840. Made with farmer’s cheese and accompanied by smetana, a cross between sour cream and creme fraiche, and tart currant kissel, a thick fruit syrup, it is available for Hanukkah and all year round, too.

Interested in making rectangular latkes of your own? Our friends at our partner site, The Nosher, have Edith’s recipe here.

Edith’s Sandwich Counter is at 495 Lorimer Street in Brooklyn.