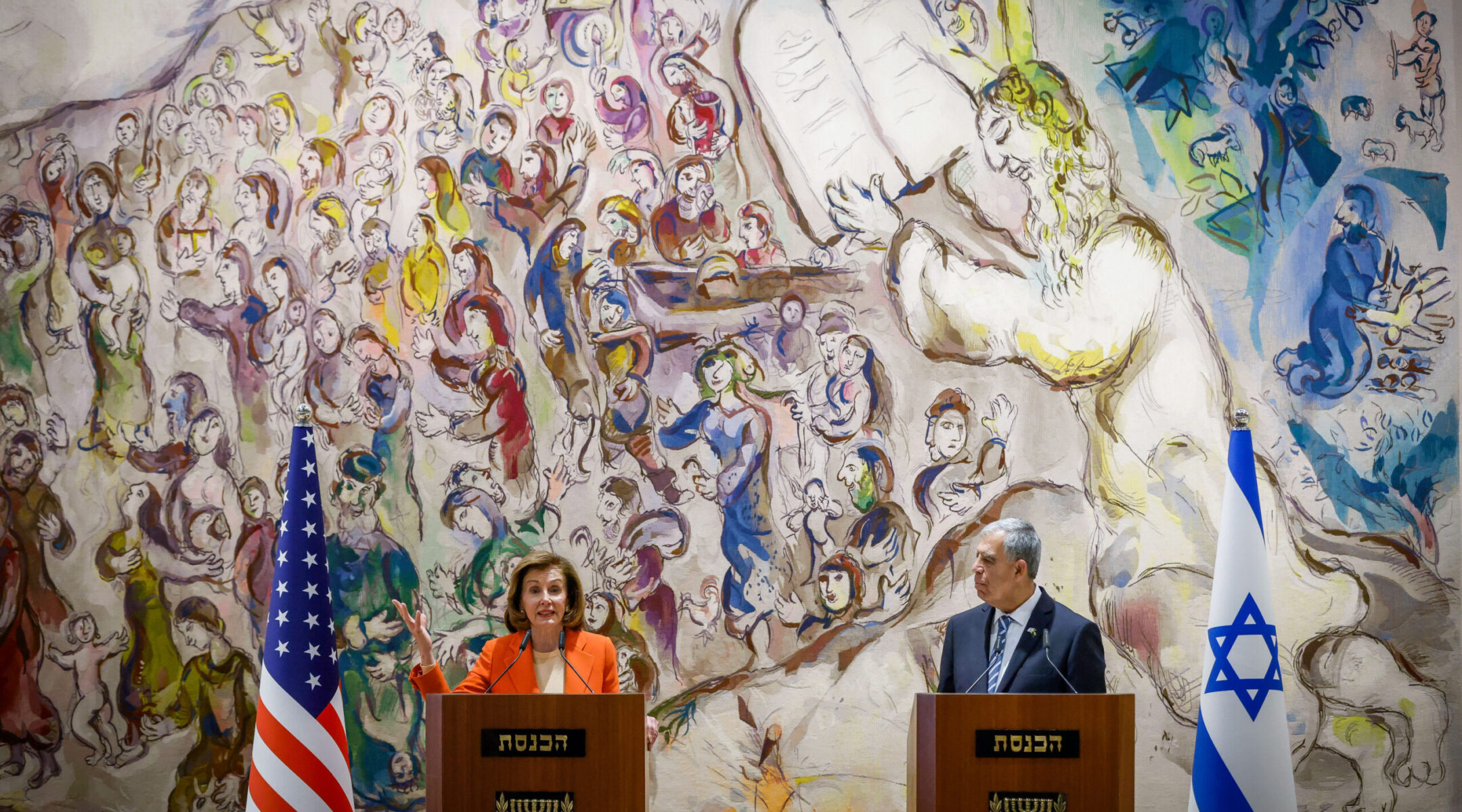 US Speaker of the House Nancy Pelosi with Knesset Speaker Mickey Levy during a joint statement at the Knesset, the Israeli Parliament in Jerusalem, Feb. 16, 2022. (Olivier Fitoussi/Flash90)
Advertisement

(JTA) — Five days after Nancy Pelosi made history in 2007 as the first woman elected to be speaker of the U.S. House of Representatives, she held an event at her alma mater, the private Roman Catholic university, Trinity Washington.

She asked a rabbi, the Reform movement’s David Saperstein, to headline the event because she saw the movement as taking the lead on a crisis that deeply concerned her, in Darfur. “Do not stand idly by the blood of your neighbor,” Saperstein said, quoting Leviticus.

Pelosi was so pleased with Saperstein’s remarks that afterwards she pulled him into a family photo.

“I want you in this,” she told Saperstein as she grabbed his arm.

American Jews have been in the picture for Pelosi since she was born, when her father helped lead the movement in the United States to garner government support for the establishment of a Jewish state, and through her close relationship with Jewish Democrats whom she promoted to leadership roles in Congress.

Pelosi, who is 82, said Thursday she would step down as leader of the Democrats in the House, after her party lost the chamber to Republicans, albeit by a much smaller margin than anyone expected.

Here are some Jewish highlights from Pelosi’s career.

Following in her father’s footsteps

Pelosi was born into a family of prominent and powerful Baltimore Democrats.

As a congressman in the 1940s, her father, Thomas D’Alesandro, was outspoken in his criticism of the Roosevelt administration for not doing enough to stop the carnage in Europe and he was an early advocate of Jewish statehood. (Pelosi loves to tell people that there’s a soccer stadium named for him north of Haifa.)

After his congressional gig, D’Alesandro became Baltimore’s mayor, and forged a close relationship with the city’s Jewish community. “She likes to say that, growing up in Baltimore, she went to a bar or bat mitzvah every Saturday,” Amy Friedkin, a past president of the American Israel Public Affairs Committee, told the Jewish Telegraphic Agency.

Pelosi has at least two Jewish grandchildren. In 2003, she told AIPAC, “Last week I celebrated my birthday and my grandchildren — ages 4 and 6 — called to sing ‘Happy Birthday.’ And the surprise, the real gift, was that they sang it in Hebrew.”

Carrying Israel close to her heart

Pelosi has visited Israel multiple times and has hosted Israeli leaders in Washington. One of her closest relationships was with Dalia Itzik, the Labor Party member of Knesset with whom Pelosi formed a bond because they both made history around the same time, as the first women speakers in their parliaments. 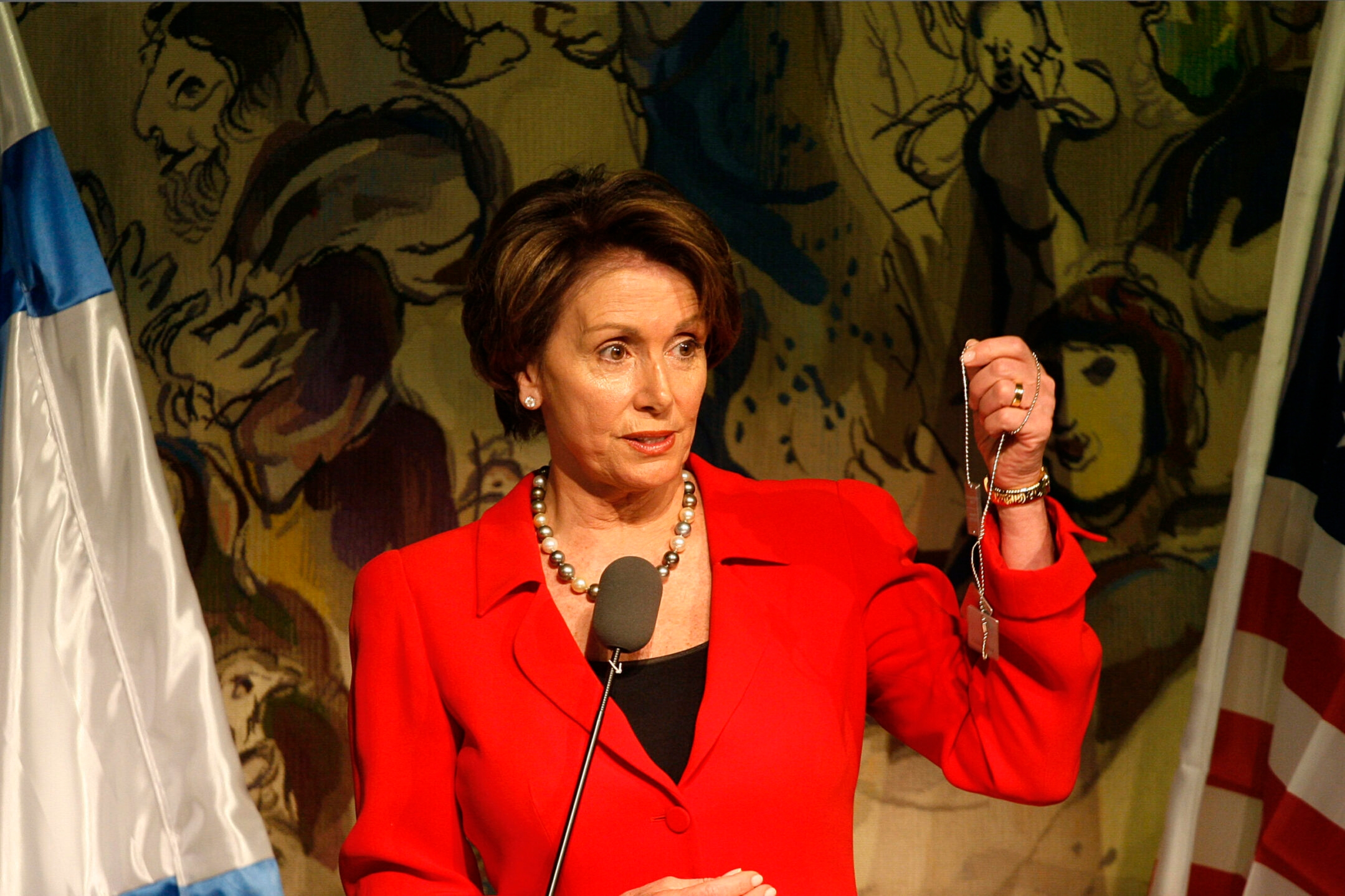 Itzik was a leading advocate in Israel for the families of Israelis held captive in Arab lands. She gave Pelosi the dogtags of three Israelis who were missing in the 1982-1986 Lebanon war (they were eventually confirmed dead). Pelosi brought the dogtags to her meetings with Arab officials she believed might be able to help bring about resolution for the families — including on a 2007 mission to Syria that infuriated the Bush administration.

She promoted Jewish members of her caucus

A number of Jewish Democrats filled top positions under Pelosi’s two stints as House speaker, from 2007 to 2011, and since 2019.

In 2004, Pelosi saw a glittering future in a young woman just elected from South Florida, and two years later named Debbie Wasserman Schultz chief deputy whip, launching a leadership trajectory that would take Wasserman Schultz to the chairmanship of the Democratic Party.

Raskin and Elaine Luria of Virginia have been prominent on the committee investigating the Jan. 6, 2021, insurrection spurred by former President Donald Trump’s lies about the 2020 election.

Just because Pelosi was close to the pro-Israel community did not mean she assumed its every policy or political position.

She got scattered boos in 2007 at an AIPAC conference when she announced plans to press for the downsizing of U.S. troops in Iraq, in part because then-Vice President Dick Cheney told the same conference that reducing a U.S. presence in Iraq would embolden Iran and make Israel vulnerable.

In 2008, when it looked like Barack Obama would overtake Hillary Clinton in the Democratic primaries, Pelosi opposed a procedural measure that might have checked Obama’s ascent. Twenty prominent Jewish Democrats, spearheaded by Israeli-American entertainment mogul and megadonor Haim Saban wrote Pelosi to tell her to keep out of the presidential stakes, allowing “superdelegates” to contradict the will of the people. She replied, more or less, thanks but no thanks.

A year later, she was clashing with Saban again when he sought to keep his friend Jane Harman, a California Jewish Democrat, in the top spot on the intelligence committee. Pelosi had her way and reportedly “went ballistic” at Saban for interfering.

Pelosi also spearheaded the successful effort in 2015 to keep Congress from nixing Obama’s Iran nuclear deal once he was president, as the pro-Israel community wanted her to do.

An Israeli poem remains her lodestone in times of crisis

Pelosi has taken in recent years to quoting Ehud Manor’s song, “I Have No Other Country,” most recently when she delivered her first remarks after her husband was grievously wounded by a home invader spurred in part by Trump’s election lies and antisemitic conspiracy theories.

At first, the assumption was that a smart Jewish aide fed her the line to use at Jewish appearances, but the story was quite different. Isaac Herzog, then Israel’s opposition leader, consoled Pelosi in 2016 when they met at a Saban-underwritten dinner in Washington. Pelosi was mourning Trump’s presidential victory a month earlier.

JTA uncovered that story after Pelosi cited her favorite line in the poem on the House floor in the aftermath of the deadly Jan. 6 riots.

“I will not be silent now that my country has changed her face, I will not refrain from reminding her and singing here in her ear, until she opens her eyes,” she said.