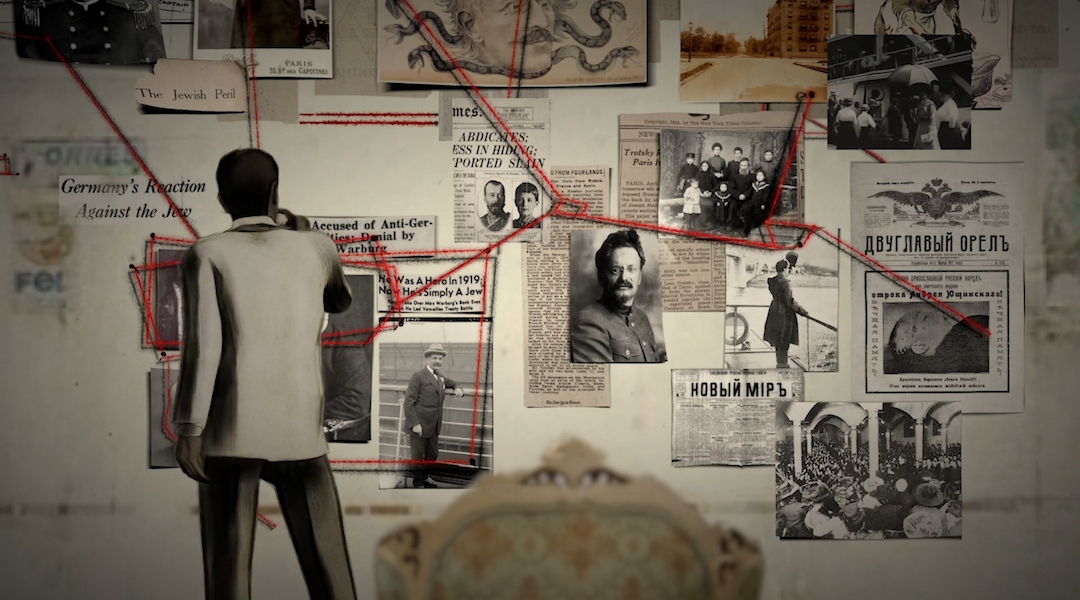 A scene from “The Conspiracy,” a film by Maxim Pozdorovkin. (Third Party Films/DOC NYC)
Advertisement

(JTA) — A few days after the comedian Dave Chappelle appeared to justify the never-ending appeal of Jewish conspiracy theories, this sentence appeared in the New York Times: “Bankman-Fried is already drawing comparisons to Bernie Madoff.”

I’ll explain: Sam Bankman-Fried is the 30-year-old founder of FTX, the crypto-currency exchange that vaporized overnight, leaving more than 1 million creditors on the hook. Bernie Madoff, is, of course, Bernie Madoff, the financier who defrauded thousands of investors through a multibillion-dollar Ponzi scheme and died in prison.

It’s a fair comparison, as a former regulator tells CNN: “Bankman-Fried, like Madoff, proved adept at using his pedigree and connections to seduce sophisticated investors and regulators into missing ‘red flags,’ hiding in plain sight.”

Nevertheless, seeing these Jewish figures lumped together, I braced myself for the inevitable: Nasty tweets about Jews and money. Slander from white supremacists. Plausibly deniable chin-scratching from more “mainstream” commentators.

What comes next is a familiar script: Jewish defense groups issue statements saying conspiracy theories traffic in centuries-old antisemitic tropes and pose a danger to the Jews. Jewish news outlets like ours post “explainers” describing how these myths take hold.

It’s exhausting, having to deny the obvious: that a group of people who don’t even agree on what kind of starch to eat on Passover regularly scheme to bilk innocents, manipulate markets or control the world. And it often seems the very attempt to explain these lies and their popularity ends up feeding the beast.

Chappelle’s now notorious monologue on “Saturday Night Live” is a case in point. At first pass, it is a characteristically mischievous attempt to both mock the rapper Kanye West for his antisemitism, and to push boundaries to explain why a troubled Black entertainer might feel aggrieved in an industry with a historic over-representation of Jews. Jon Stewart certainly heard it that way, telling Stephen Colbert, “Look at it from a Black perspective. It’s a culture that feels that its wealth has been extracted by different groups. That’s the feeling in that community, and if you don’t understand where it’s coming from, then you can’t deal with it.”

That is a useful message, but consider the messenger. Chappelle appears to disapprove of West’s conspiracy-mongering, but never once discusses the harm it might cause to the actual targets of the conspiracies. Instead, he focuses on the threat such ideas pose to the careers and reputations of entertainers like him and West. The “delusion that Jews run show business,” said Chappelle, is “not a crazy thing to think,” but “it’s a crazy thing to say out loud.” He ends the routine by ominously invoking the “they” who might end his career.

That’s what critics meant when they said Chappelle “normalized” antisemitism: He described where it’s coming from, explained why his peers might feel that way, and only criticized it to the degree that it could lead the purveyors to be cancelled. It’s like saying, “You don’t have to vaccinate your kids. Just don’t tell anybody.”

This week I worked with a colleague on an article about how the “Jews control Hollywood” myth took hold, and at each step of the way I wondered if we were stoking the fire we were trying to put out. No, Jews don’t control Hollywood, we reported, but “nearly every major movie studio was founded in the early 20th century” by a Jew. Those moguls rarely used the movies as a platform to defend Jewish interests, but per Steven Spielberg, “Being Jewish in Hollywood is like wanting to be in the popular circle.”

A documentary shown Thursday night at the DOC NYC festival here in New York teeters on the edge of the same trap. “The Conspiracy,” directed by the Russian-American filmmaker Maxim Pozdorovkin and narrated by Mayim Bialik, uses 3-D animation to explain how conspiracists ranging from a 19th-century French priest to American industrialist Henry Ford placed three Jews — German financier Max Warburg, Russian revolutionary Leon Trotsky and falsely accused French soldier Alfred Dreyfus — at the center of a vast, contradictory and preposterous scheme to take over the world. It connects age-old Christian animosity to the Jews to centuries of antisemitic paranoia and fear-mongering that led to unspeakable violence at Kishinev, Auschwitz and Pittsburgh. “This myth has plagued the world for centuries,” Pozdorovkin explains.

Or at least that’s the message you and I might have gotten. But I can also see someone stumbling on this film and being seduced by the rage and cynicism of the conspiracy-mongers — who, I should note, are quoted at length. Part of the problem is the film’s aesthetic: a consistently dark palette and a “camera” that lingers on ugly examples of antisemitic propaganda. Even though these images are seen on a creepy “conspiracy wall” and connected with that red thread familiar from cop shows and horror films, I can well imagine an uninformed viewer asking why members of this tiny minority seem to be at the center of so many major events of the 19th and 20th centuries.

I was reminded of a joke by the Jewish comedian Modi, ridiculing the ritual of inviting celebrities accused of antisemitism to visit a Holocaust museum. “Which is the stupidest idea, ever,” he says. “You’re taking someone who hates Jews into a Holocaust museum. They come out of there [saying] ‘Wow! Oh my God, that was amazing! I want a T-shirt!’”

The poet and essayist Clint Smith, whose cover story in next month’s Atlantic explores the meanings of Holocaust museums in Germany, makes a similar point. After visiting the museum in Wannsee documenting the infamous meeting in which the Nazis plotted the Final Solution, he wonders: “Might someone come to a museum like this and be inspired by what they saw?”

The makers of “The Conspiracy” (oy, that title) obviously intend the very opposite. In an interview with the Forward, Pozdorovkin agrees with the interviewer’s  suggestion that those “who most need to see this film might be the least likely to be convinced by it.”

“My hope is that this film has a trickle-down effect,” he explains.

The fault lies not with those who seek to expose antisemitism but with a society that relies on the victims to explain why they shouldn’t be victimized. As many have pointed out, antisemitism isn’t a Jewish problem; it’s a problem for the individuals and societies who pin their unhappiness and neuroses on a convenient scapegoat. Ultra-nationalism and intolerance are the soil in which conspiracies take root.

But as long as scapegoating remains popular and deadly, the victims have to keep explaining and explaining the obvious — that, for instance, the fact that Sam Bankman-Fried and Bernie Madoff are Jewish is no more significant than the fact that Henry Ford and Elon Musk, two people who founded car companies, are gentiles.

The question is, who is listening?