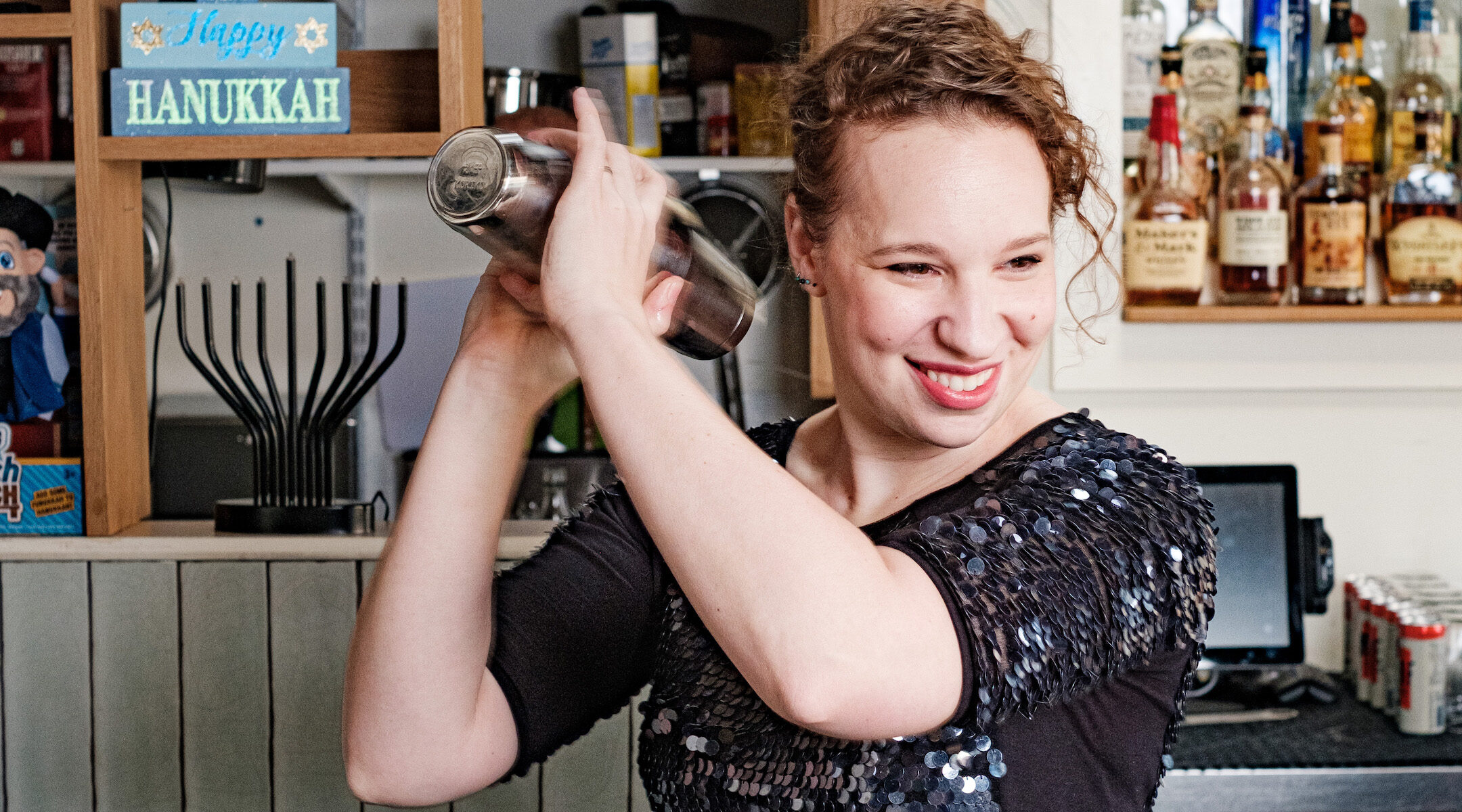 Naomi Levy, 36, founded the Maccabee Bar in Boston in 2018. This year, Levy, who was named "Best Bartender" by Boston Magazine in 2019, is bringing the pop-up Hanukkah-themed cocktail bar to New York. (Ezra Pollard)
Advertisement

This is something that’s long irked Naomi Levy, a 36-year-old Jewish bartender who lives in Boston. There, as in New York, Christmas-themed pop-up bars appear all over the city — leaving Levy feeling like a “tourist,” she said.

But instead of bah-humbugging the situation, Levy took action: In 2018, she opened the Maccabee Bar, a Hanukkah-themed pop-up in Boston. Now in its fifth year, the cocktail bar, open only in December, serves drinks like the Latke Sour (apple brandy, potato, lemon, egg white, bitters) and an Everything Bagel Martini (“everything” spiced gin, tomato water, dill, vermouth), as well Jewish- and Hanukkah-adjacent small bites, such as latkes, sufganiyot and Bamba.

And now, for the first time, the Maccabee Bar is expanding to New York, where it will be hosted by Ollie, a bar in the West Village, from Dec. 13 through 31.

Levy had hoped to bring the Maccabee Bar to New York in 2020 but that was delayed. “I honestly cannot believe that nobody has done this before me in New York,” Levy told the New York Jewish Week.

To become the Maccabee Bar, Ollie will be covered in blue and white Hanukkah lights and decor. “It’s going to be crazy,” Levy said. “I’ve mentally prepared. I definitely encourage reservations.”

Ahead of the Manhattan Maccabee Bar opening, the New York Jewish Week caught up with Levy to talk about what inspired her, how she expanded and what, exactly, creating a Hanukkah-themed cocktail entails. 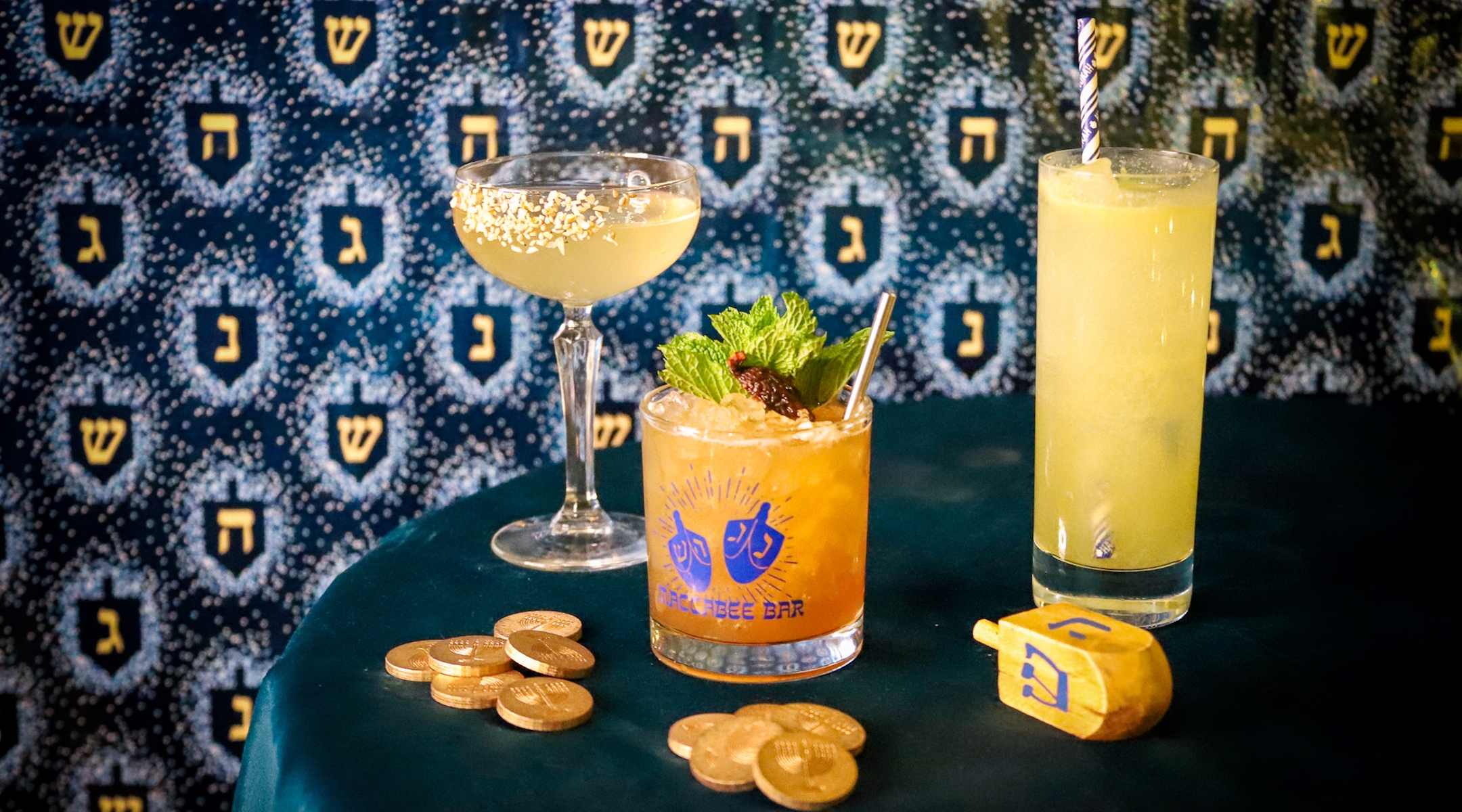 Hanukkah themed drinks, decor and snacks will be available at the Maccabee Bar in New York. (Carlie Febo)

New York Jewish Week: What was the inspiration behind starting a Hanukkah-themed bar?

Naomi Levy: I really love the holiday season and for many, many years I ran a bar called Eastern Standard in Boston. We were open all the time, so I worked every Christmas. I always really loved the holiday spirit and started seeing a lot more of these Christmas-themed bars popping up. But as much as I love all of the festivities this time of year, I also feel very much like a tourist because I don’t celebrate Christmas. I wondered what would happen if I created a pop-up bar that was completely dedicated to Hanukkah. Luckily, I had just opened at a new bar and the ownership was amenable to trying stuff out. We gave it a go and it was absolutely incredible. The turnout was amazing. People were so excited — I’ve never been called a “mensch” for making a cocktail before. I realized, “Oh my gosh, it’s not just me that had that feeling this time this year.” There’s a group of people that are underrepresented and would love to really feel like they get to get into this festive time of year just as much as everyone else. It’s been really exciting to watch it grow and just to be able to bring my culture and bring something fun to the community.

After four years in Boston, what was the process of opening a pop-up in New York and how did you make the leap?

I had reached out to a couple friends in New York. What was really exciting to me about Ollie is that I have a former staff member from Boston who moved to New York, and he works at Ollie now. He has worked at a couple of the Maccabee Bars in Boston. It’s good to have someone who works there who’s been through it and understands what they’re getting into and things like that. He connected me with the owner and they were really excited about it. It’s just that much more helpful that I have someone there that knows what’s about to happen.

What are you most excited about in bringing the energy of Maccabee Bar to New York?

I just really hope to provide a place where people get to celebrate and not in the same way that they already have access to.

We’re starting with one location in New York, but in Boston we have two locations because the demand has just been that high. We now have Maccabee regulars [in Boston]. Last year, I had a customer who said, “My mom told me to come to this!” I just thought, how cool is it that we’re a bar that your mom’s telling you to go to?

Tell me a little bit about the cocktails and how you make them Hanukkah-themed.

My cocktail style in general tends to be pretty culinary. I tend to get inspiration from food and food flavors, which is perfect for a Hanukkah menu since there are so many delicious foods that we eat. The Latke Sour is obviously inspired by latkes. Then we have the Hebrew Hammer, which is inspired by sufganiyot. We make a leavened sugar, which is basically a yeasted simple syrup, to give you that kind of yeasty sensation of a doughnut, but it’s actually a really nice dry, sour cocktail.

To me, it’s also really important to showcase flavors from different aspects of the Jewish diaspora as well. I am Ashkenazi, but it’s really important to me to also showcase Sephardic flavors. So we have a drink that is called Ocho Candelika, which is actually the name of a song in Ladino that is all about the celebration of oil. So we do an olive oil-infused gin with a little honey, almond, apricot and lemon for some of those more classic Spanish and Sephardic flavors.There’s a drink this year that’s inspired by Ethiopian Sanbat Wat [a spicy chicken stew typically made on Shabbat] with berbere spice in it.

Then there will be all sorts of fun things, ranging from a hot drink that has a syrup in it that is kind of tzimmes-inspired and a flip that’s rugelach-inspired. So it will be both very, very Hanukkah-associated things but also just some wider Jewish flavors.

The Maccabee Bar will be at Ollie, 64 Downing Street, beginning Tuesday Dec. 13 through Saturday, Dec. 31. Find details and reservations on Maccabee Bar’s website.