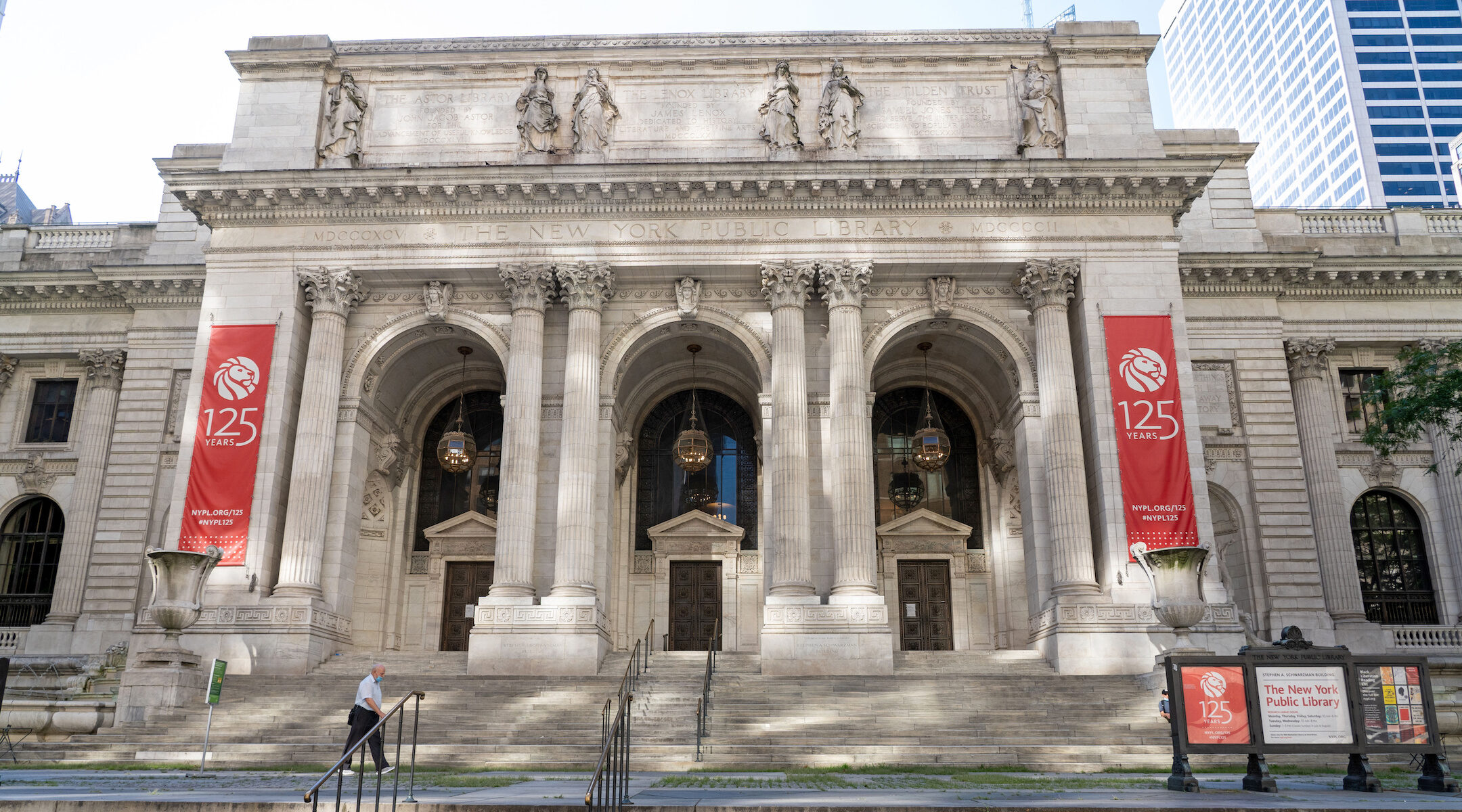 (New York Jewish Week) – In the heart of Manhattan, you can page through the Passover story in an Italian haggadah from half a millennium ago, check out the posters for the most popular Yiddish plays of the 1920s and examine dried flower arrangements from the Holy Land made at the end of the 19th century.

Today the collection, housed in the library’s main building on Fifth Ave., boasts over 250,000 materials from all over the world, with the earliest ones dating back to the 13th century.

“People don’t realize the amount of depth we have in this collection chronologically and geographically and it is still growing,” said Lyudmila Sholokhova, the curator of the collection. “I think we have been too modest about what we have here — this library is for everybody and the community needs to know that.”

To celebrate its 125th birthday and spread the word, the Dorot Jewish Division is putting some of its favorite materials on display for an event with librarians, scholars and writers from around the country to discuss the history of Dorot, and its future, on Wednesday, Dec. 14. The event is in person and online.

That history dates to November 1897, when banker and philanthropist Jacob Schiff donated $10,000 to the New York Public Library for the purchase of “Semitic literature” and the hiring of a curator of a Jewish division in the library. Schiff ended up donating $115,000 (nearly $4 million today) over the course of his lifetime.

The head librarian position went to bibliographer and historian Abraham Solomon Freidus, who immigrated to New York from Latvia in 1889. Under his watch, the newly established Jewish Division became a prominent research and reference center for Jewish scholars all over the world. A reading room dedicated to the Jewish Division, where scholars have researched everything from a study of Jews and chocolate to a history of Jewish women in theater, has remained in active use at the library since 1911.

Sholokhova came to the NYPL in 2020 after 16 years working as a librarian at the YIVO Institute for Jewish Research. Part of her mission is to showcase the collection to the public and help bring awareness to the library’s extensive resources.

Throughout most of its history, the Dorot Jewish Division was used as a reference site while scholars worked on encyclopedias and research. Today, the reading room continues to be open to the public — and there’s also an extensive digital catalog available on the library’s website. All New Yorkers need to do is request the items they want to see a few days in advance.

Though the division inherited a few small collections and private libraries, many of its items have been purchased or donated over time.

The New York Jewish Week recently stopped by to see what would be on view during the anniversary celebrations. Here are 10 highlights:

1. Historic haggadahs from Venice and Amsterdam 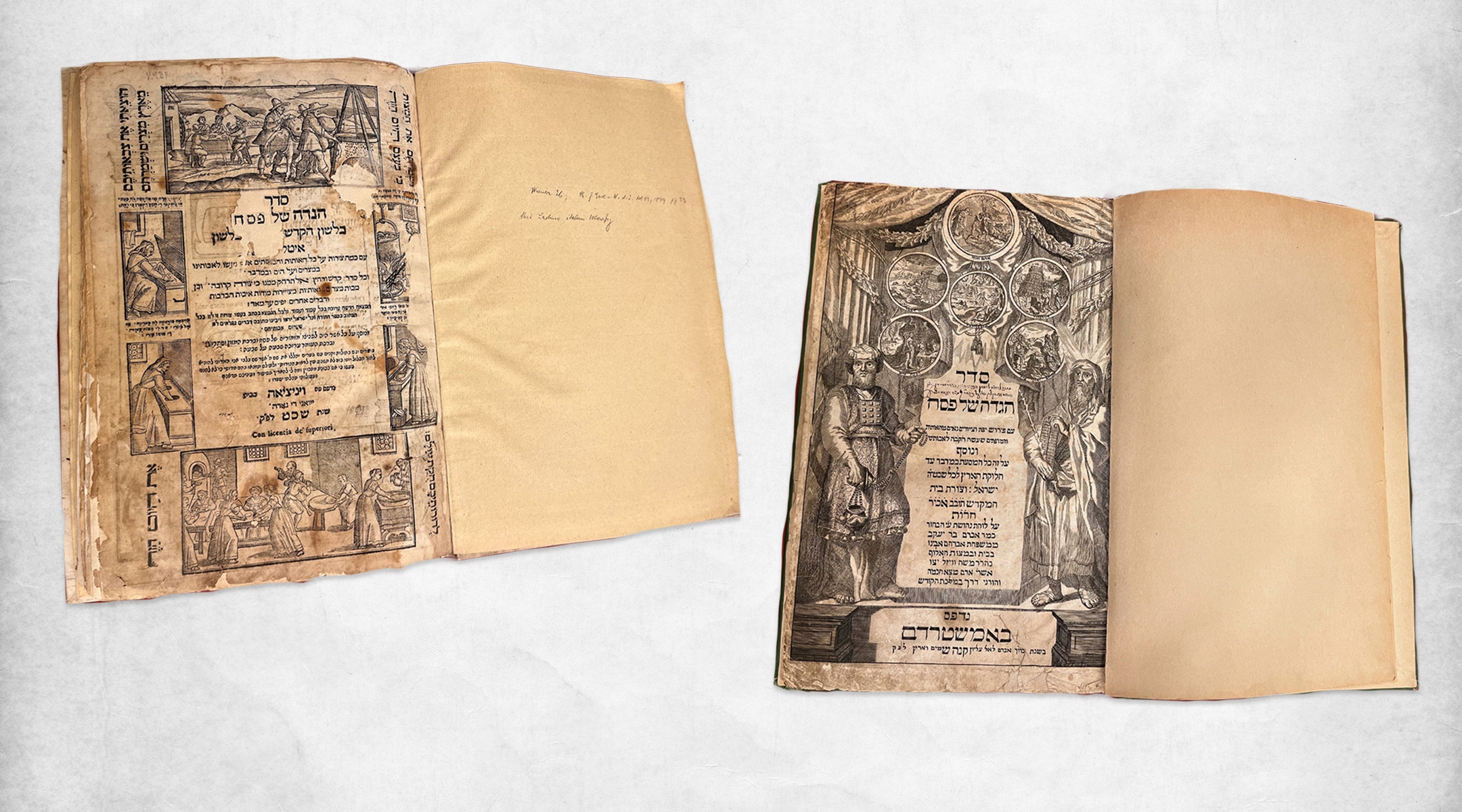 The Dorot Jewish Division boasts an impressive collection of haggadahs, the guides used at Passover seders. The collection includes the Venice Haggadah with Judeo-Italian translation, printed in 1609, and the Amsterdam Haggadah printed in 1695. Both of these volumes are first editions of what became a standard structure for a haggadah — the Venice Haggadah influenced Mediterranean tradition and the Amsterdam Haggadah influenced Central European tradition.

2. The very first Sunday edition of the Forverts 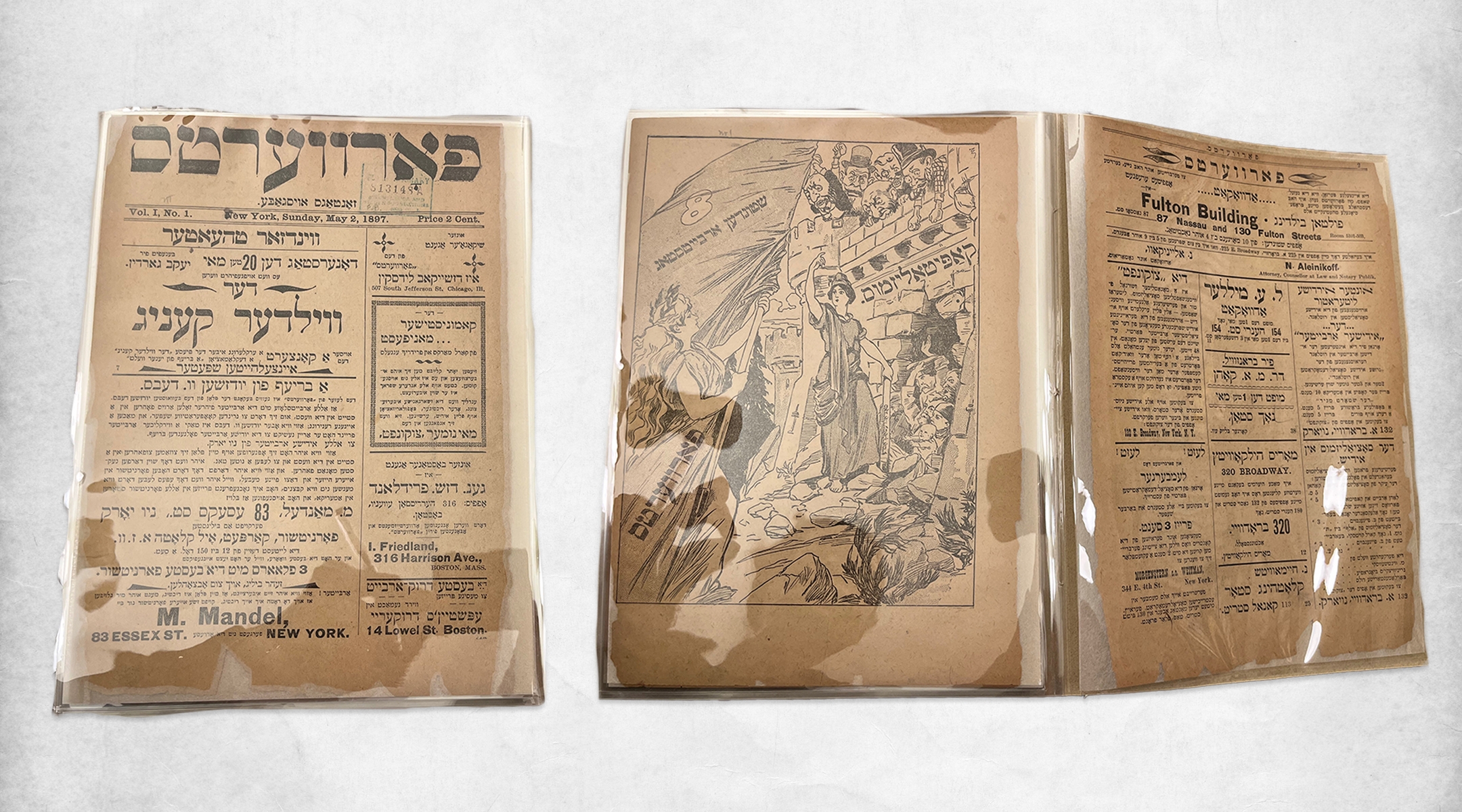 Forverts (or “Forward” in English), the Yiddish daily that circulated in New York throughout the 20th century, is not just one of the most significant publications in American Jewish history — at its height it was the highest-circulation daily in New York. The paper began publishing in April 1897 and paper copies from its first few months in circulation are incredibly scarce. Sholokhova believes Dorot’s original copy of its first Sunday Supplement, published May 2, 1897, may be the earliest known copy of the Forverts in existence.

3. The earliest image of the North American continent in a Hebrew book 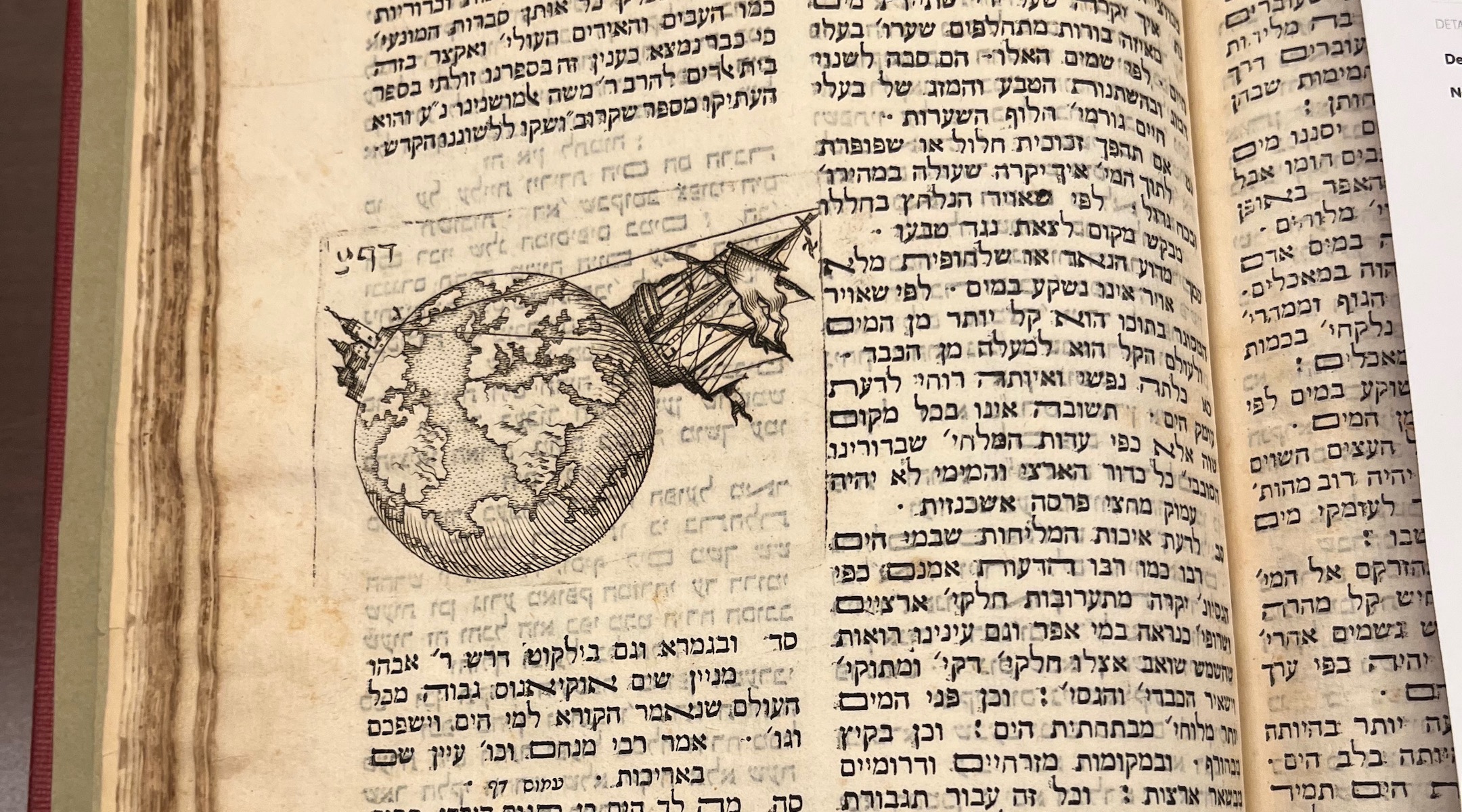 An image of the globe in Ma’aseh Toviyah, an encyclopedia of science and medicine. (Julia Gergely)

Published in Venice in 1707, “Ma’aseh Toviyah” (Work of Tobias) is an encyclopedia of science and medicine written in Hebrew, with sections on theology, astronomy, medicine and geography. Written by Toviyah Katz (also known as Tobias Cohn), the book contains the earliest known image of the American continent in a Hebrew book. 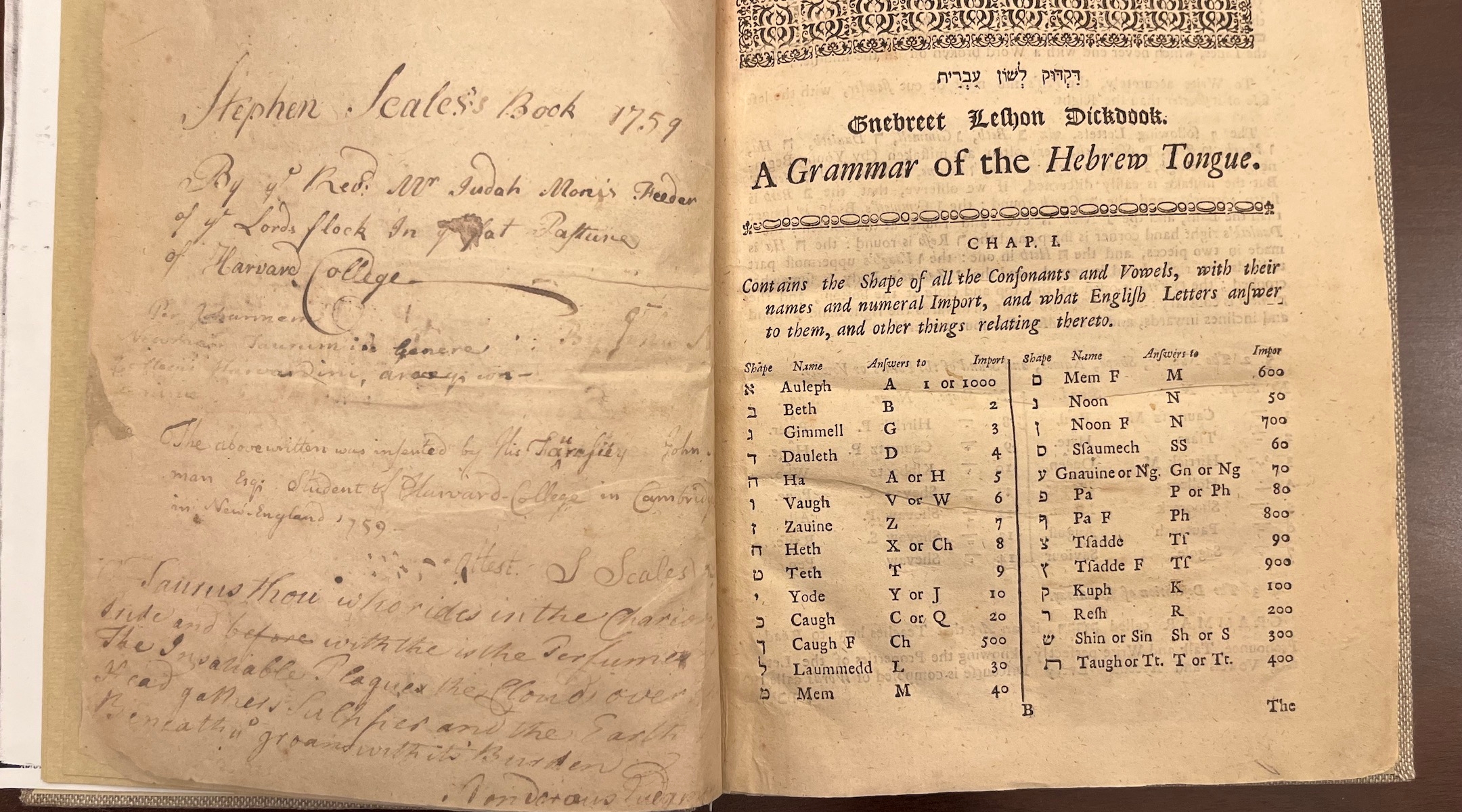 Printed around 1735, “A Grammar of the Hebrew Tongue” or “Dikduk leshon l’ivrit” is the first known book in the American colonies to contain the entire Hebrew alphabet and a lesson on Hebrew grammar. Compiled by Judah Monis, a Hebrew teacher at Harvard College, the book was intended for Harvard students who desired to study the Old Testament in its original language. Monis was born Jewish but converted to Christianity.

5. A palmistry guide according to Kabbalah This book details the art of palmistry, or hand-reading, according to the Jewish mystical tradition of kabbalah. “Sefer Hochmat HaYad,” or “Book of the Wisdom of the Hand,” was compiled by Eliyahu Mosheh Galino, who lived in Constantinople (present-day Istanbul) in the early 16th century. The library dates the printing of this copy, notable for illustrations that feature white lines etched into black hands, to sometime around 1800. 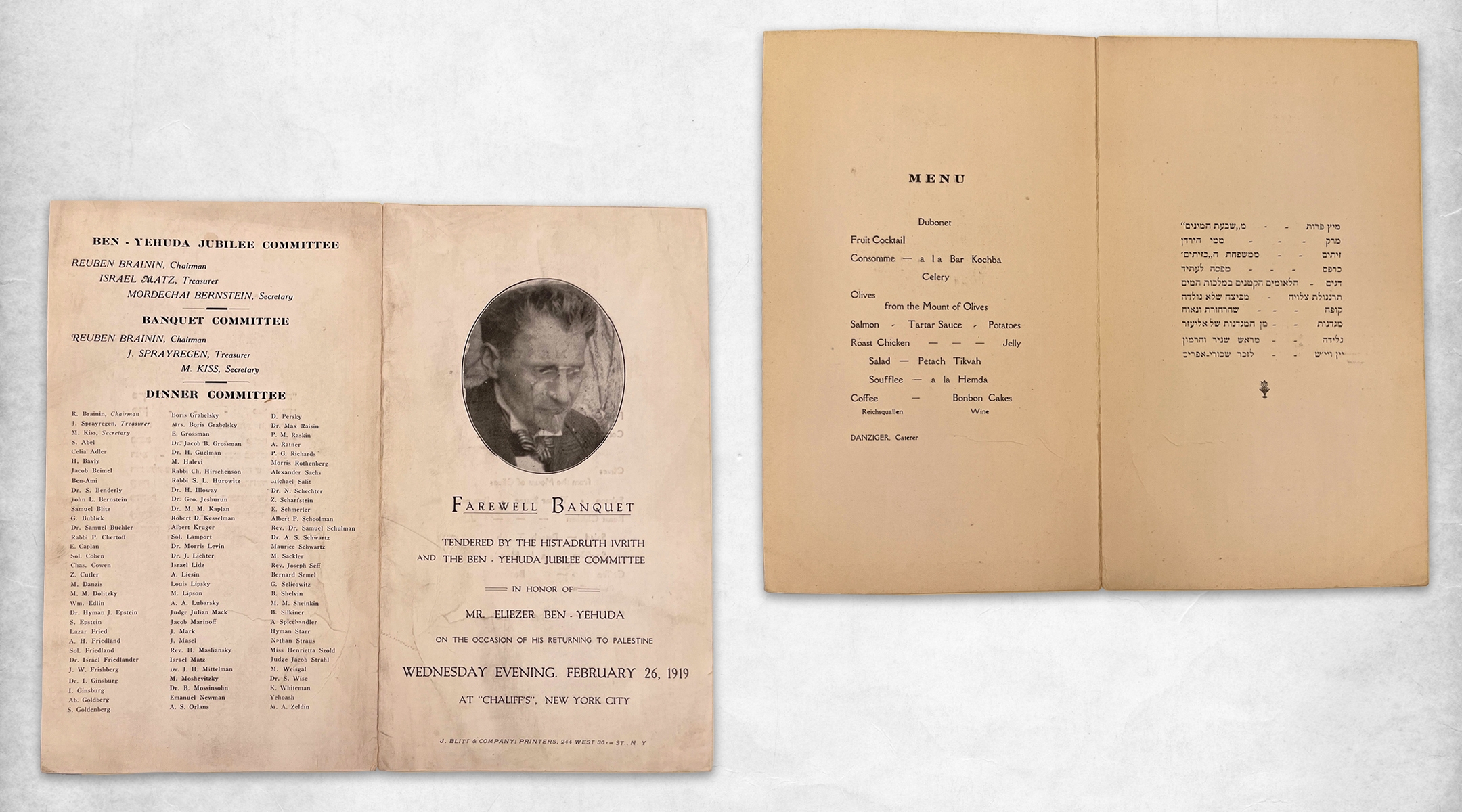 Invitation for a farewell banquet for Eliezer Ben-Yehuda, who compiled the first Hebrew dictionary at the New York Public Library. (Julia Gergely, design by Grace Yagel)

One of the Dorot Jewish Division’s most famous researchers, Eliezer Ben-Yehuda, was an early Zionist who became known as the father of Modern Hebrew. During World War I, Ben-Yehuda came to the New York York Public Library to continue his work on the first modern Hebrew dictionary, which he eventually brought back to Palestine. The archive has kept an invitation for Ben-Yehuda’s farewell dinner on Feb. 26, 1919, which includes all the names of the members of the dinner committee as well as the menu in Hebrew and English.

7. A community ledger from Myropil’, Ukraine 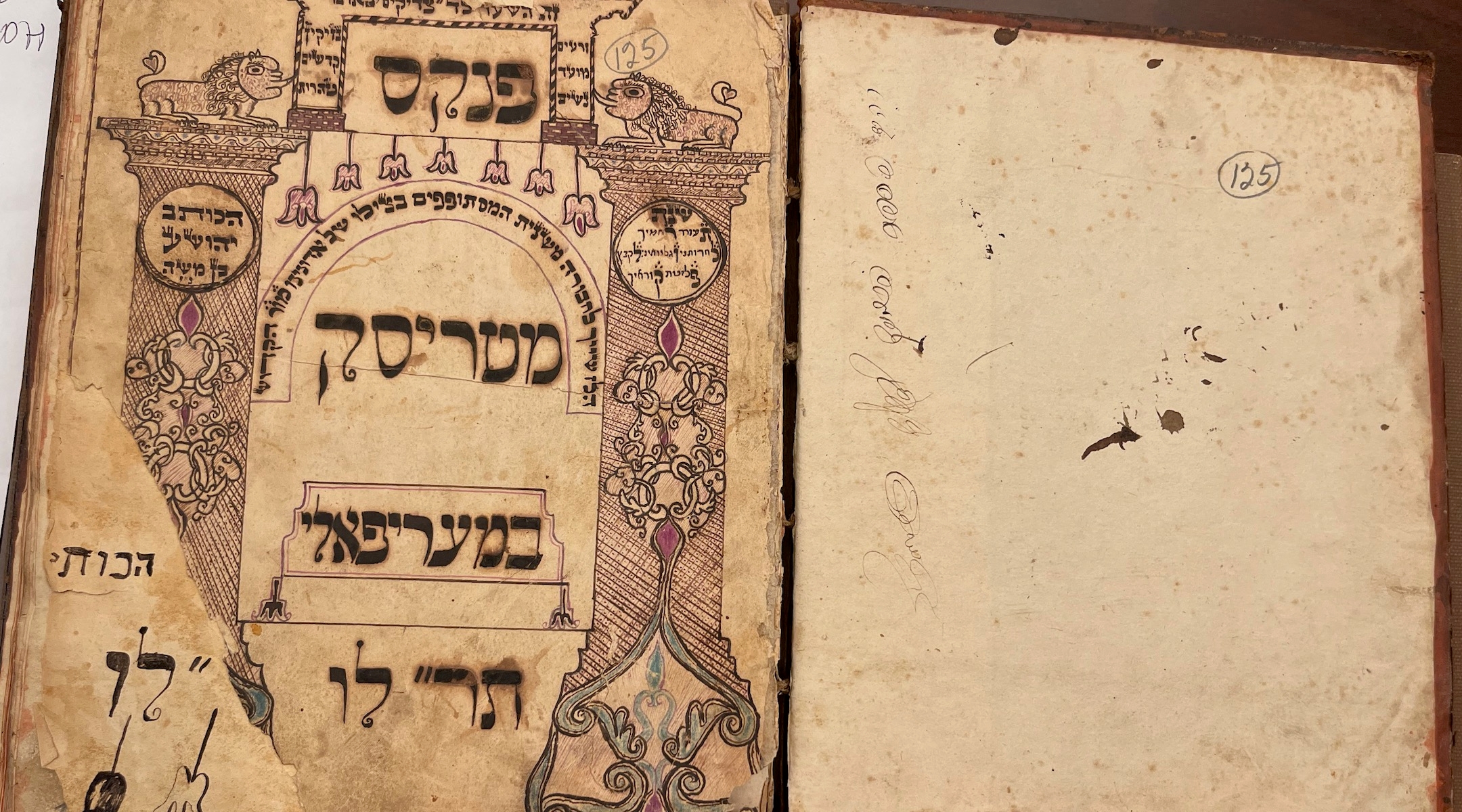 The title page ledger with minutes from a mishnah study class in Myropil’, Ukraine. (Julia Gergely)

A pinkas is a census-like ledger kept by Jewish communities in Eastern Europe, recording births, deaths, financial transactions, events and even criminal cases. This illustrated pinkas comes from a mid-19th century Hasidic community in what is now Myropil’, in the Zhitomir  region of Ukraine, and details the minutes of a Society for the Studies of Mishnah class held over the course of a decade. The first entry is dated 1837 and the last is 1848. The pinkas is dedicated to the Trisk Rabbi, Avrohom ben Mordechai Twersky. 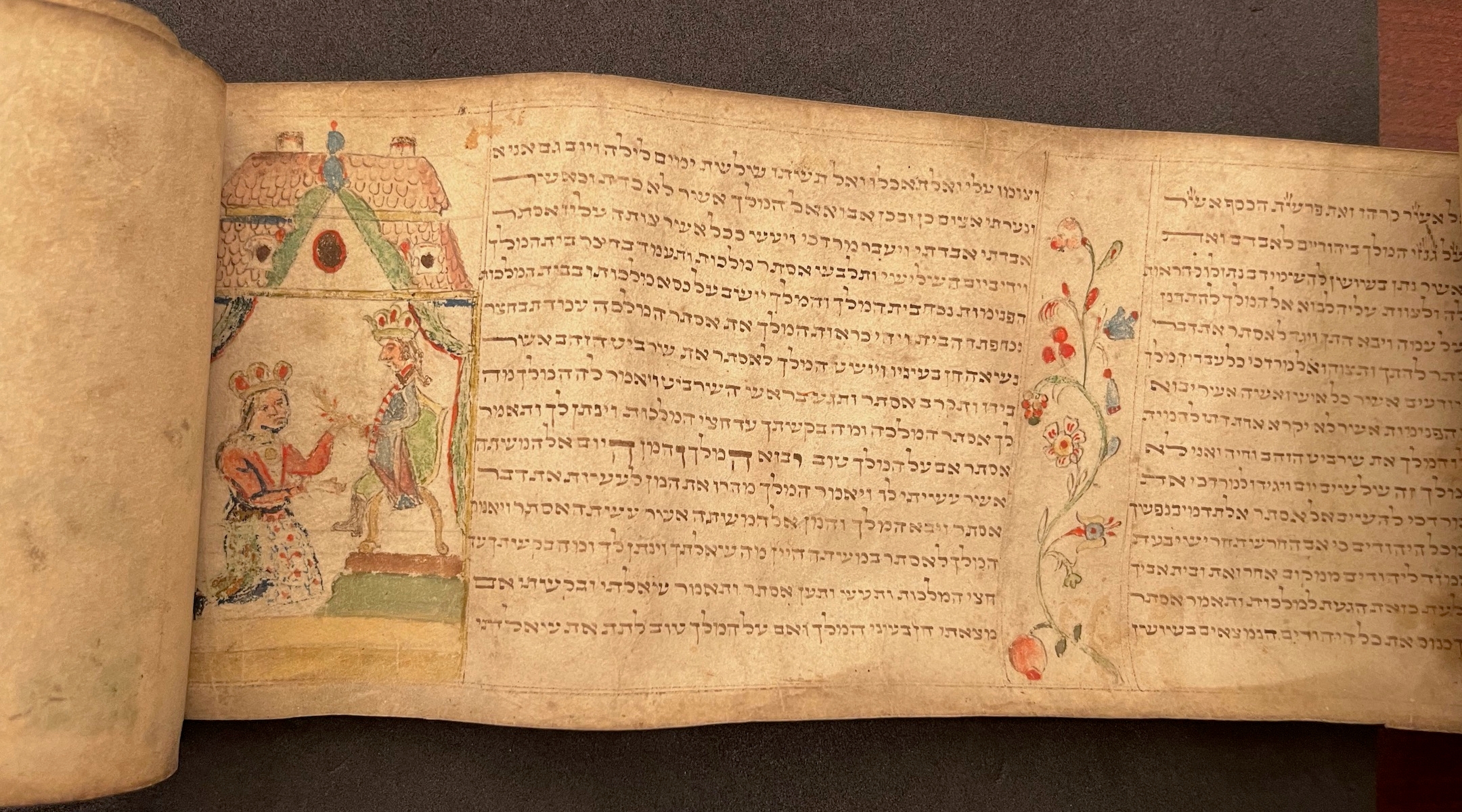 An illuminated manuscript of Megillat Esther, read on Purim. The illustrations, in folk style, were drawn in the late 18th century. (Julia Gergely)

An illustrated scroll of Megillat Esther, the scroll read on Purim, is believed to be from Eastern Europe from the late 18th century. The scroll is significant because it is an illuminated manuscript, with hand-drawn images from scenes in the Book of Esther surrounding the text. 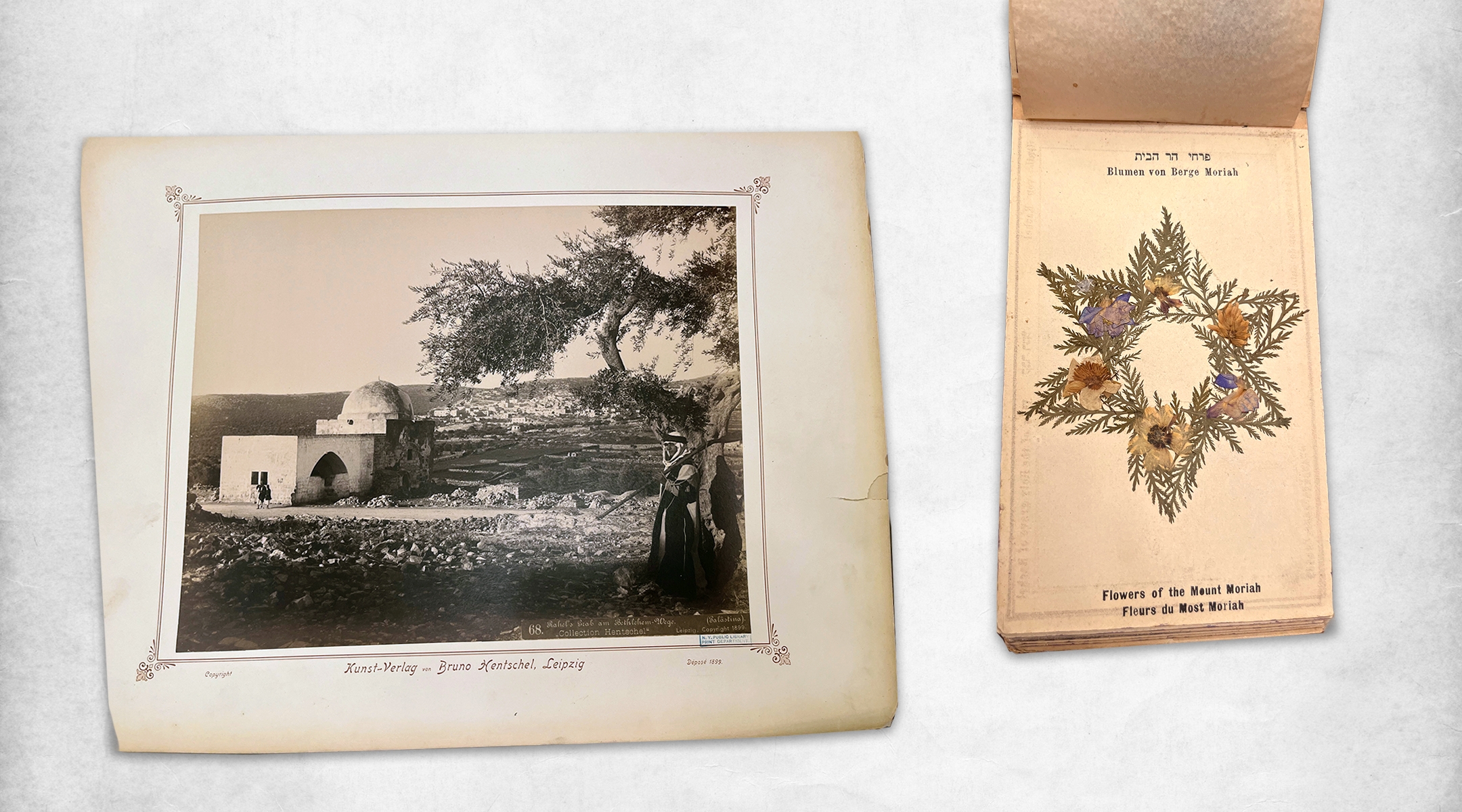 Left: An 1899 photo of Rachel’s Tomb by Bruno Hentschel. Right: Flowers from Israel, dried and pressed in the 1890s. (Julia Gergely, design by Grace Yagel)

In the 1890s, as the political Zionist movement was beginning to take shape, small books of pressed flowers that were gathered in the Holy Land appeared in the United States. Dorot’s holding features native flowers pressed into the shape of Jewish symbols, and will be shown next to photographs of the landscape of Jerusalem from the same period, taken by Bruno Hentschel, a German photographer who worked from a small studio in Jerusalem.

10. Advertisements from Jewish businesses in the United States 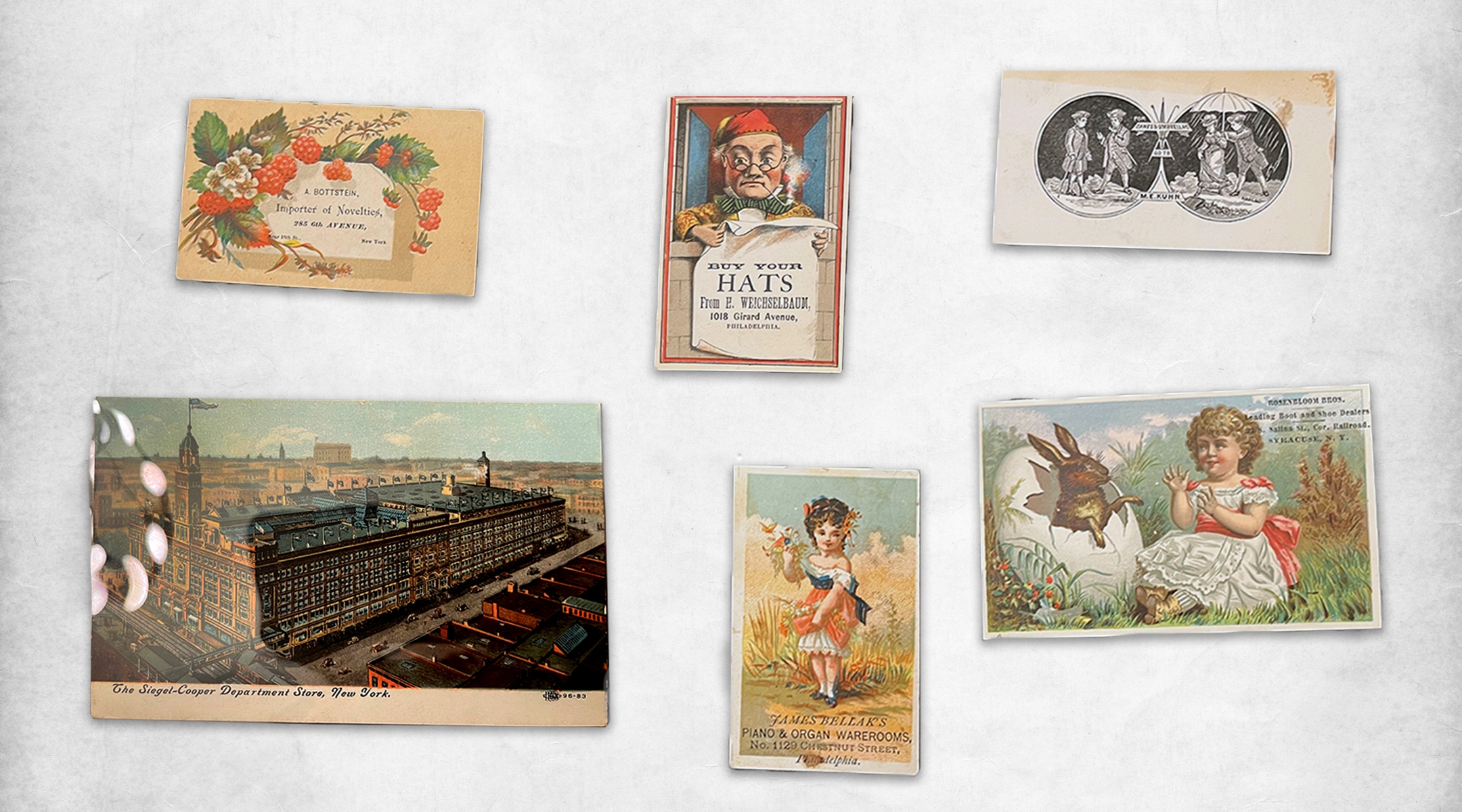