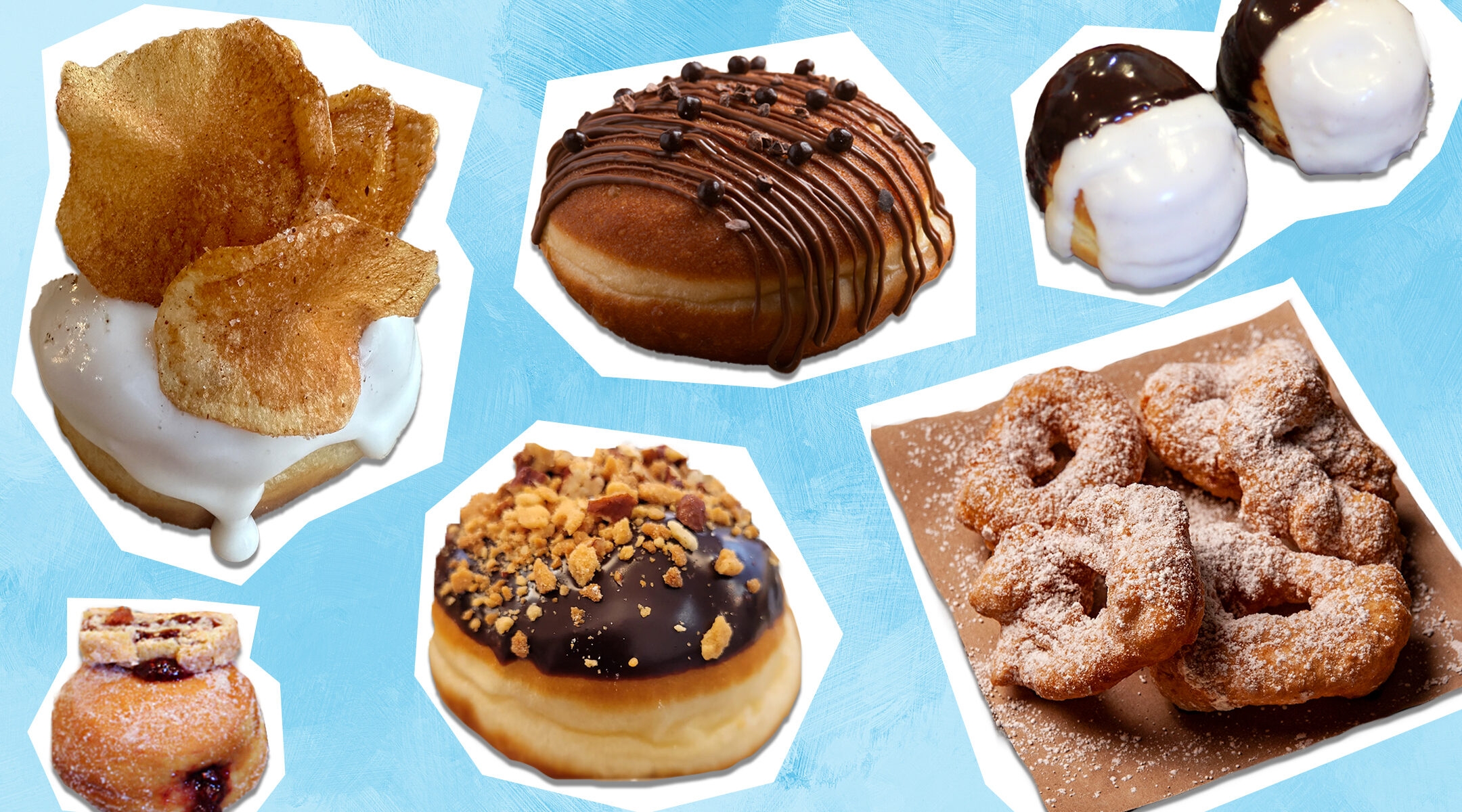 Of course, when it comes to Hanukkah treats, there are other options, too, especially sufganiyot (singular: sufganiyah), the deep-fried doughnuts inspired by the Hanukah miracle of the oil lamp. These fried goodies are most typically filled with strawberry jam, and they’re readily available at many bakeries and kosher food stores across the city.

However, in this great city of ours, there’s no need to stop with the classic! In recent years, New York pastry chefs have upped their Hanukkah game and are getting uber creative with the flavors and fillings of their Hanukkah jelly doughnuts and fresh approaches to other Hanukkah treats.

Perhaps they are looking over their shoulders at the frenzy of creativity that overtakes Israeli bakeries in the weeks leading up to Hanukkah. Bakeries there sell a staggering 20 million or so sufganiyot each year during the Festival of Lights. Some of these are simple jelly doughnuts, while others are veritable works of art, filled with creative concoctions ranging from passion fruit cream to wild berry mascarpone and topped with flavored whipped creams, crispy cherries, pistachio glaze and more.

When it comes to sufganiyot, New York may not have reached Israeli-style innovation — yet. But if you want to venture beyond fried potato pancakes this year, you’re in luck: From unique collaborations between chefs and bakers (latke-inspired doughnuts, anyone?) to tropical flavors, the following eight bakeries and restaurants are churning out extra-special Hanukkah treats this year.

If you like to go out for your holiday celebration, Israeli-born Chef Einat Admony is preparing a special Hanukkah dessert at her flagship restaurant Balaboosta: the Moroccan doughnut, sfenj, will be on the menu all eight days of the holiday. Her take on the fried pastry is flavored with the anise-flavored spirit Arak, grapefruit zest and juice. You get four to five sfenj with your order. $15 per serving.

From Dec. 15 through Dec. 24, Breads will be serving the classic strawberry jam-filled sufganiyah. But you can also choose passion fruit jam, vanilla cream and chocolate cream fillings ($3.65 each; $37 for a dozen). Yes, fresh latkes ($2.95) are also on offer, but if you’d really like to try something different, for the month of December Breads is featuring a bialy babka ($16.95), a savory combination of babka dough with bialy-inspired fried onions and poppyseeds.

By The Way Bakery

Locations in Brooklyn, Upper East Side, Upper West Side and Westchester

No gluten, no oil, no problem! At this kosher bakery, you can get a dairy- and gluten-free doughnut to mark the holiday — what’s more, it’s baked, not fried. The baking, according to By the Way’s Nazli Sarpkaya, “gives the doughnuts a lighter and more tender texture.” The doughnuts ($3.50 each, $30 for nine) are filled with raspberry jam. Retail locations are supervised by Rabbi Aaron Mehlman of National Kosher Supervision.

For Hanukkah, Edith’s, a new kid on the Brooklyn food block, is spotlighting a special “collabonut,” as owner Elyssa Heller calls them: sanded sugar doughnuts from Greenpoint institution Peter Pan Donut & Pastry filled with Edith’s grape jelly, homemade from juicy Concord grapes and thick, rich Manischewitz wine. Heller told the New York Jewish Week she landed on Concord grape as this year’s flavor because it was the taste of her childhood, and because grape juice and wine play an important role in Jewish rituals. Six doughnuts for $28.75; preorder is available for nights 1 and 2 only, Dec. 18 and 19. Single doughnuts available in-store all eight days for $4.75 each. Be sure to check out Edith’s unique rectangular latke while you’re there!

Creativity knows no bounds at Fany Gerson’s doughnut hub. This year, Gerson and team are collaborating with 13(!) of Fan Fan’s favorite bakers and pastry chefs to come up with a Baker’s Dozen Holiday Box ($75) filled with innovative sufganiyot. Among the bakers: Caroline Schiff, the executive pastry chef at historic steakhouse Gage & Tollner, who created a latke doughnut (filled with apple butter, topped with a sour cream glaze and homemade cinnamon-dusted potato chips) and Umber Ahmad of Mah-Ze-Dahr, who contributed a vanilla bean, cardamom and rose doughnut to the lineup. Preorders available.

Israeli Adir Michaeli, former head baker at Breads and the founder and owner of Michaeli Bakery, opened a second location this year — this one on the Upper East Side. Michaeli is having fun with his fillings, which range from the classic strawberry jam to cream fillings in flavors like hazelnut, pistachio, banana-pecan, dulce de leche and vanilla-chocolate. He is also preparing sfenj, a vegan Moroccan fried doughnut, coated in sugar. Prices range between $4 to $5 each; available from Dec. 18 to 26. International Kosher Council certification.

My Most Favorite Food

This kosher bakery and eatery no longer has a storefront, but they do have an extensive menu of Hanukkah foods that can be picked up at their commissary in Long Island City or delivered to your door. They have raspberry or apricot sufganiyot — available in regular size or mini — but for something a little different you can also try Hanukkah-themed cupcakes, sugar cookies (in the shape of a dreidel or a Hanukkah menorah) and cakes. Pick up and delivery of these holiday-themed foods begins on Sunday, Dec. 18, the first night of the holiday, and runs through Dec. 26. Prices start at $18 for four regular-sized doughnuts; delivery charges vary by location. Kosher certification from OK Kosher.

Three locations: One in Brooklyn and two on the Lower East Side

The creative minds at Fan Fan are also collaborating with iconic appetizing store Russ & Daughters for a good cause: a portion of sales of their three-sufganiyot Hanukkah Box ($13) will go to the Anti-Defamation League, the non-profit that fights antisemitism. The box consists of a traditional(ish) sufganiyah rolled in vanilla sugar and filled with homemade roasted strawberry jam; a rugelach doughnut filled with raspberry jam and rolled in cinnamon sugar; and a black and white doughnut filled with chocolate and vanilla cream and iced in vanilla and chocolate. These treats — also available for $4.50 each — are available at Fan Fan and all Russ & Daughters locations from Dec. 15 through 25.