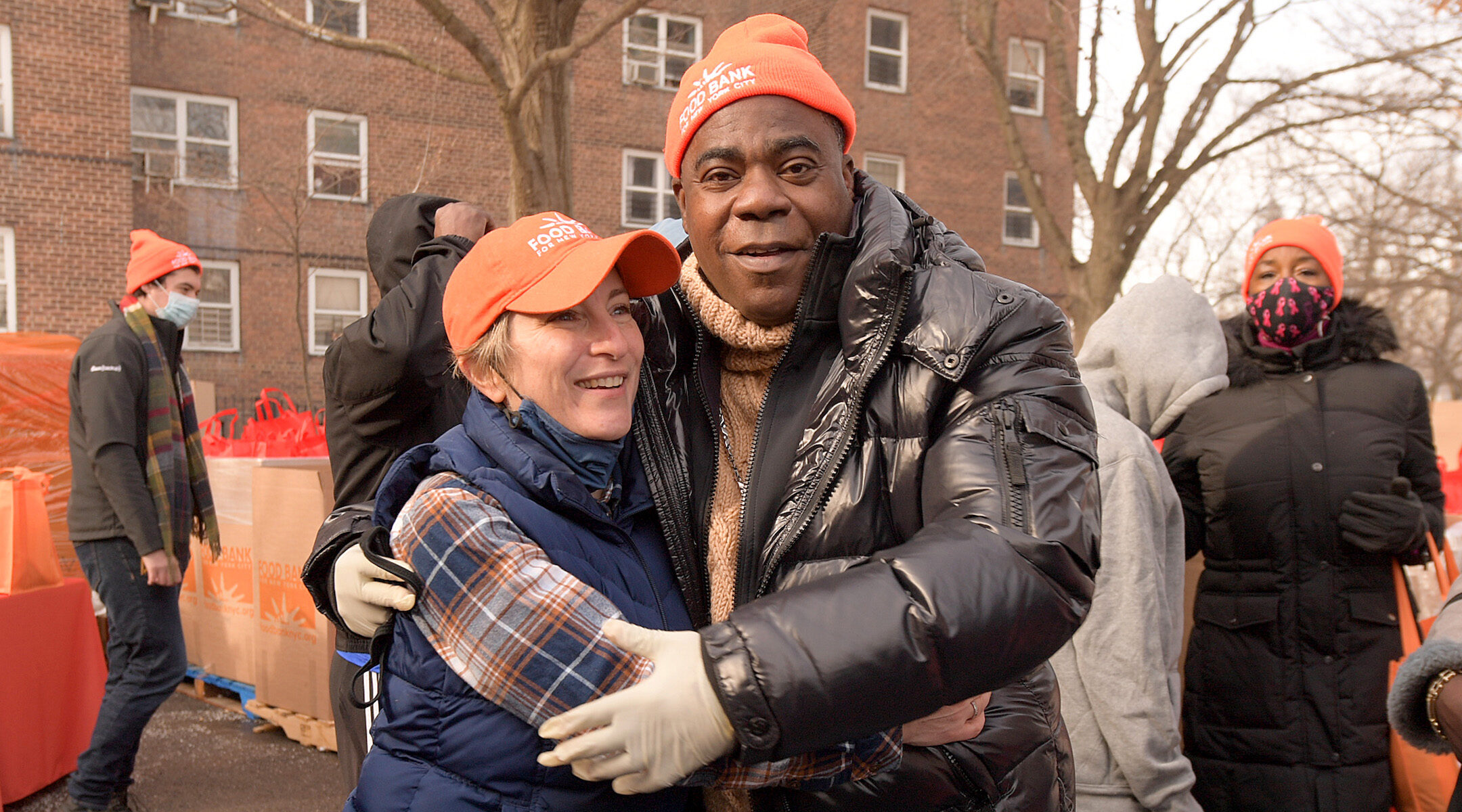 (New York Jewish Week) — At Food Bank for New York City, one of the largest food banks in the country, the holiday season is crucial to ensuring New Yorkers have enough food to be able to live with dignity.

Since its founding in 1983, the organization has provided over one billion meals to New Yorkers in need — as well as offering free SNAP assistance, tax preparation services and financial literacy programs to low-income residents.

“Our central mission is that we feed people for today, but we have made significant investments in programming that truly helps to lift people out of poverty,” president and chief executive officer Leslie Gordon told the New York Jewish Week. “Because the reason why people are food insecure to begin with is a resource problem. It’s an inability to get connected to networks or resources, because of racist systems or policy issues.”

Gordon, who is Jewish, has helmed the organization since 2020, and in some ways, rose to the role in a way that seemed inevitable. As a child, she grew up hearing stories about her grandfather selling meat, produce and other goods from the grocery store he owned in Ossining, New York and delivering food donations to the needy. Her mother, who grew up at the store, was the executive director at the Hunts Point Produce Market, the country’s largest wholesale produce market.

Prior to joining Food Bank for New York City, Gordon held leadership roles at Feeding Westchester, a food bank in Westchester County and City Harvest, which helps make fresh, nutritious food accessible around New York. Starting her job at the beginning of the pandemic, Gordon has overseen a doubling of Food Bank for New York City’s annual food distribution across the city from 70 million pounds to 150 million pounds.

A fourth-generation Tarrytown resident, Gordon has been a member of the Conservative Congregation Sons of Israel synagogue in Briarcliff Manor, NY since she was four years old. She lives in the same house that she, her grandfather and her mother grew up in, with her wife, two dogs and two cats.

The New York Jewish Week chatted with Gordon about her background, her favorite parts of the job and the Jewish family values that got her here.

This interview has been lightly condensed and edited for length and clarity. 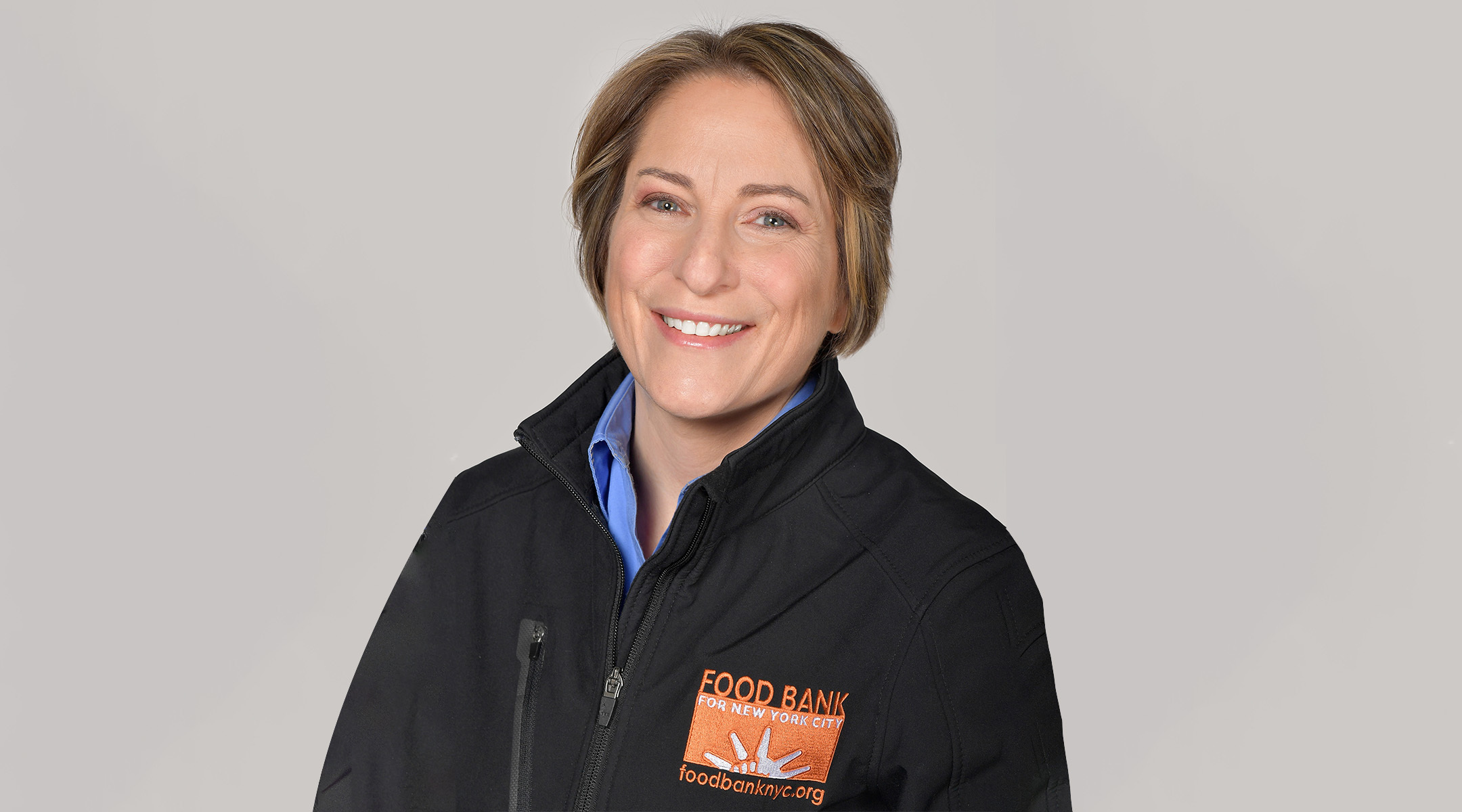 After leadership roles at two other food banks, Gordon took over the top position at Food Bank for New York City in March 2020. She credits her Jewish family values for helping guide her. (Courtesy)

New York Jewish Week: How have your Jewish values guided you as the CEO of Food Bank for New York City?

Leslie Gordon: The thing about my connection to Judaism at Food Bank is really a personal responsibility around doing tikkun olam. It’s an ever-present, everyday commitment to making the world more just and equal through social action, which is what we do every day at Food Bank — helping New Yorkers across the five boroughs to have the resources they need to be able to have a stable, healthy life where they can thrive and look forward to working on achieving their dreams.

Food is culture. Food is love. Food is history. Food has always been a big part of my personal Jewish experience — whether through holidays or through historical explorations. My grandfather was a butcher. He grew up in a small Jewish enclave in Rockland County called Pot Cheese Hollow [now Spring Valley], which is a sort of a European framing for all things cottage cheese.

You started this job right at the beginning of the pandemic. What was that like, and what was the path that led you to working at Food Bank?

I’ll never forget this: My first day was March 30, 2020. It was a little crazy to be the humble leader of one of the nation’s largest food banks at a time when the need was historically outsized and quickly escalated. It was a little bit of a challenge and, frankly, has been for most of my tenure.

Again, it goes back to my Jewish familial roots. I am carrying on a family legacy of feeding people: My grandfather, Norman Goldberg, was the son of European immigrants. When they came over [to America], and in his growing up years in that enclave in Rockland County, they were really, really poor. One of their biggest assets, believe it or not, was a dairy cow — no running water, no indoor plumbing. He would tell stories as kids that sometimes the only thing he ate in the course of a day was an apple that he picked off a neighboring farmer’s tree.

Fast forward many years into the future, he was a successful businessman, between a grocery store, a butcher store and a wine and liquor store, amongst other pursuits. He never forgot where he came from and he would talk to us about the importance of connecting people with food, and again doing tikkun olam. They would get phone calls from the rabbi at Temple Beth Abraham in Tarrytown, where they lived, because food banks and food pantries didn’t exist back then — the World War II era all the way through the 1950s, ’60s, and even ’70s. They would get a list of people in the community who needed help and [my grandfather] would take my mother by the arm and they would go to the local grocery store and shop. Frequently, as my mom tells it now, they’d end up in a local fourth-floor walk-up apartment building, ring the bell, drop the groceries and go, because you wanted to preserve the dignity of those whom you are helping.

That really made an impression on me. My grandfather was also an avid backyard gardener and was famous for leaving those little brown lunch bags full of excess produce from his backyard garden on people’s stoops.

My mother became the head of the world’s largest wholesale produce terminal, which is based in the Hunts Point section of South Bronx. I caught the bug on logistics and operations in food and really the romanticism of the food system. I’m still of that generation where I feel very connected to my local food system and farmers. I had a very unique growing up experience, where I got to see train cars full of broccoli or potatoes or other amazing produce that traveled through small towns and cities across the United States to land up in the South Bronx. So, I’ve been in the arena of food banking for about 15 years. I couldn’t have predicted it, I call it a happy accident. Of the 10 food banks in New York State, I’ve had the pleasure and honor of leading three of them.

What type of outreach do you do to New York’s Jewish community?

We’re a city of about 8.4 million people, and 1.6 million of them, give or take, are people who just don’t know where their next meal is coming from or what it will be. Ask yourself: Have you ever been hungry for a long period of time during the day? How do you deal with that? Imagine if that was your every day. That is compounded, potentially, by other struggles that you have. People don’t live single-issue lives. So, typically, when you’re food insecure, there are a lot of other issues that you’re grappling with — could be housing issues, could be mental health issues, could be employment or underemployment issues. There’s just a lot going on in the mix. New York City is a particularly expensive place to live. It’s a tough environment.

We’re the heart of a network of about 800 on-the-ground partners across the five boroughs. On nearly every street in nearly every neighborhood, our partners are food pantries, community kitchens, senior centers, shelters, community-based organizations like New York City Housing Authority or a Boys and Girls Club. In the case of the Jewish community, we have relationships with more than 40 on-the-ground agencies that specifically serve observant Jews. Organizations like Masbia, Alexander Rapoport’s restaurant-style soup kitchen that he’s now famous for.

We’re serving one of the nation’s largest kosher observant populations in the U.S. right here in New York City. We’re committed to making sure that kosher-observing communities in Williamsburg, Midwood, Crown Heights, Coney Island, Lower East Side, etc., have access to good kosher food that they can feel good about. The number of Jews in New York City who struggle is just astounding. We have a very large Jewish population, obviously. And so, you know, it’s something that’s on my mind a lot. I’ve had the opportunity to work with the Jewish community in New York now for over 15 years. Studies tell us that more than 10% of Jewish adults, and Jewish adults with kids in New York are food insecure. It’s serious. You’d be astounded, probably, to learn that more than 20% of adults in Jewish households in New York are at the poverty line.

What is your favorite part of the job?

A job as a food bank leader is very, very unique. In the course of a day, I can work on operations, I can work on marketing and communications, I can meet with donors, I can be on the phone with one of our agencies or food pantries on the ground, or I can be working on policy or advocacy. So it’s a really varied position. The most fun part about my job is the people and the stories. It’s the people who we serve who just have really big hearts and deep and interesting personal stories, and they’re just like you and me — moms and dads and families and kids who are trying to live their best life. We take the opportunity to be able to help them along the way pretty seriously.

For me, it starts internally with our Food Bank family. I take that really seriously. The culture in the organization is really important to me. I want people to feel supported and have all the resources they need to do their job, to be excited and energized about the ability and opportunity they have to impact people’s lives. At the end of the day, it’s always the people.

I’m a bit of a builder, and a fixer. It’s just who I am. Why I’m that way, I have no idea. My mother tells me that I’m my grandfather’s granddaughter. I just have a particular affinity for how things work and systems and processes and making things better and more efficient. It’s just part of my DNA, I guess. That is a skill set that really fits well with what’s required to run a food bank.