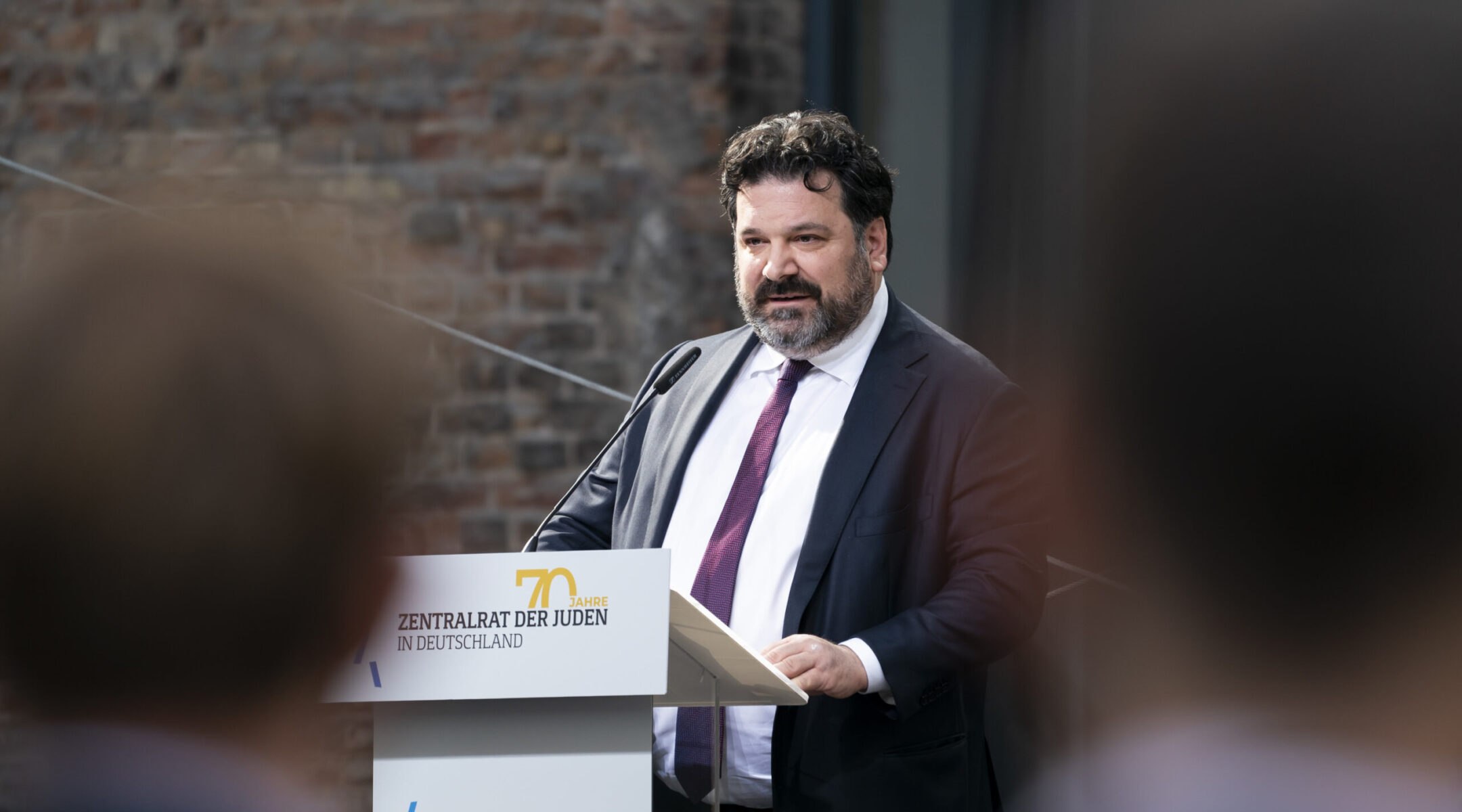 Gideon Joffe, president of the Jewish Community of Berlin, speaks at the celebration to mark the 70th anniversary of Germany's Central Council of Jews at the New Synagogue in Berlin, Sept. 15, 2020. (Henning Schacht - Pool/Getty Images)
Advertisement

(JTA) — In a shocking development, the embattled founder of Germany’s non-Orthodox rabbinical schools has relinquished his ownership stake in them to the Jewish Community of Berlin.

The 25,000 euro transaction means that Rabbi Walter Homolka is no longer in control of the Reform Abraham Geiger College and the Conservative Zacharias Frankel College at the University of Potsdam.

The sale achieves a result that the Central Council of Jews in Germany, the seminaries’ main funder, has been trying to reach openly since late last year, after two investigations confirmed that Homolka had abused his power at the seminaries.

The Jewish Community of Berlin had not publicly been part of the efforts to overhaul the schools launched after allegations against Homolka broke into public view last May. The allegations initially related to a sexual harassment scandal involving his husband, who was also his employee, but widened to implicate other aspects of Homolka’s leadership.

The group’s announcement late Wednesday of the purchase, executed the day before, alarmed some who have been advocating for changes at the seminaries because the plan did not clearly rule out a role for Homolka. The Central Council of Jews in Germany issued a statement lambasting the fact that the deal “took place without consultation with the students, employees, or the donors” and said the new arrangement would not improve rabbinical education in Germany.

But in a hastily arranged phone call Thursday, Berlin Jewish Community President Gideon Joffe assured Josef Schuster, the council’s head, that Homolka would not be part of the seminaries going forward. The call left Schuster prepared to collaborate with Joffe’s group, a spokesperson for the council confirmed.

Now, the path is clear for the official Jewish community to seize authority over non-Orthodox rabbinical training in the country where Reform Judaism was born in the 19th century.

“This may not be the ideal situation, but it is a compromise that allows almost everyone to live with the results,” Cantor Itamar Cohen, the graduate whose complaint kicked off the scandal, told the Jewish Telegraphic Agency. He said he would fully embrace the offer “if it is accepted by Klal Israel, the majority of the Jewish community as encapsulated in the main representing bodies.”

Concerns about the surprise announcement largely reflected worries that Homolka could have structured the deal in a way that benefits him. 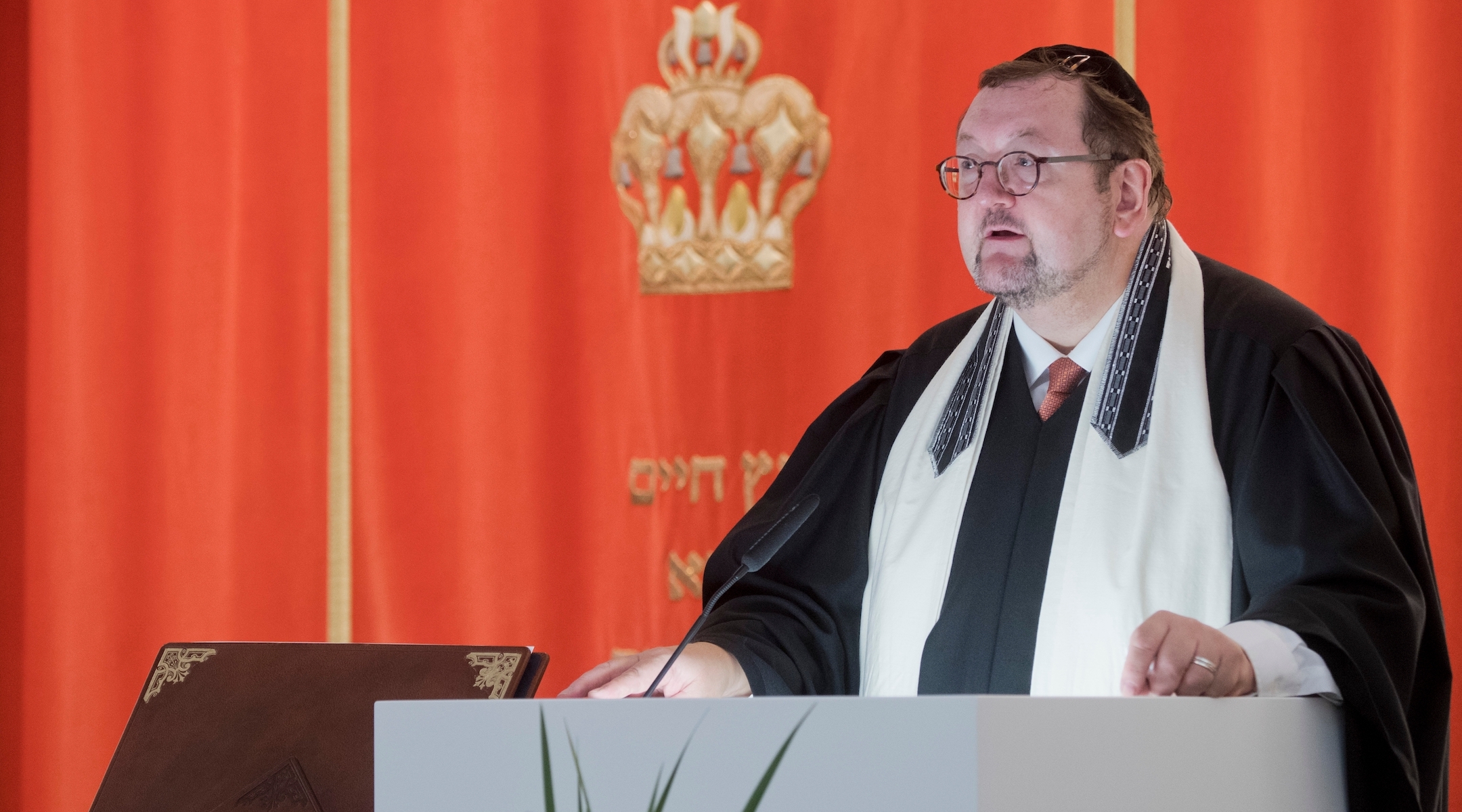 Two separate investigations — one by the university and the other by lawyers commissioned  by the Central Council — recently determined that Homolka had created an “atmosphere of fear” among students and staff in the very institutions he launched more than 20 years ago. The final report from the Central Council investigation is expected to be released in the coming weeks. Homolka has steadfastly maintained his innocence.

In the wake of those findings, there was an increasing appearance of desperation on the part of the old guard to hold on to control of the two seminaries. In December, days after the damning Central Council interim report was issued, the Union of Progressive Judaism in Germany — with a newly elected board friendly to Homolka — announced it had replaced the interim director of the Geiger College with its own appointee. The Central Council promptly nixed that plan, calling the Union of Progressive Judaism a puppet of Homolka and announcing its appointment of the scholar Gerhard Robbers to work on restructuring the two colleges.

Skeptics of the latest development said they were sure Homolka’s influence would emerge somewhere, for example in appointments to the reconstituted institutions.

“I don’t find this reassuring,” said Nick Hoermann, a current student at Frankel College. “It has been clear for a while now that Homolka’s only way to act in the future would be through back doors.”

But for now at least, the Central Council — which initially called the sale announcement “astonishing” — says it is ready to work with the Jewish Community of Berlin.

Though the official community’s move came as a surprise to many, Joffe and his team had been considering some kind of rescue maneuver since the scandal broke last May, Ilan Kiesling, a spokesperson for the community, said in an email to JTA. The concrete plan emerged only after the damning preliminary expert opinion came out in December.

Joffe approached Homolka directly at that point and convinced him “that a completely fresh start at [Abraham Geiger College] was indispensable – together with a complete renunciation of all his leadership positions. Rabbi Homolka agreed to this renunciation and transferred all shares of the non-profit limited company to the community,” Kiesling wrote.

The legally binding takeover took place this week, and did not cost the community anything beyond “the capital contribution of the limited company in the amount of 25,000 euros,” Kiesling said.

He added that the community “guarantees a complete and transparent new start” for the Geiger seminary. “There will no longer be an accumulation of offices” under one person, one of the habits for which Homolka has been criticized. There was no specific reference to the Frankel College, which until now has appointed its own academic leadership.

The community plans to establish an international advisory board and an external contact point for students to report any problems. Early on in the scandal, it emerged that Cohen’s complaint had been investigated internally, by parties beholden to Homolka.

Kiesling also told the JTA that the community had engaged a former community president, Rabbi Andreas Nachama, chair of Germany’s liberal rabbinical conference, known as ARK, to advise them from a rabbinical perspective. Nachama was ordained by the U.S.-based Alliance for Jewish Renewal movement and leads an egalitarian Reform congregation in Berlin.

In his statement Wednesday, Joffe said, “The top priority for us at the moment is to bring the Abraham Geiger College into calm waters and pave the way for the students to continue their education in a stable structure.”