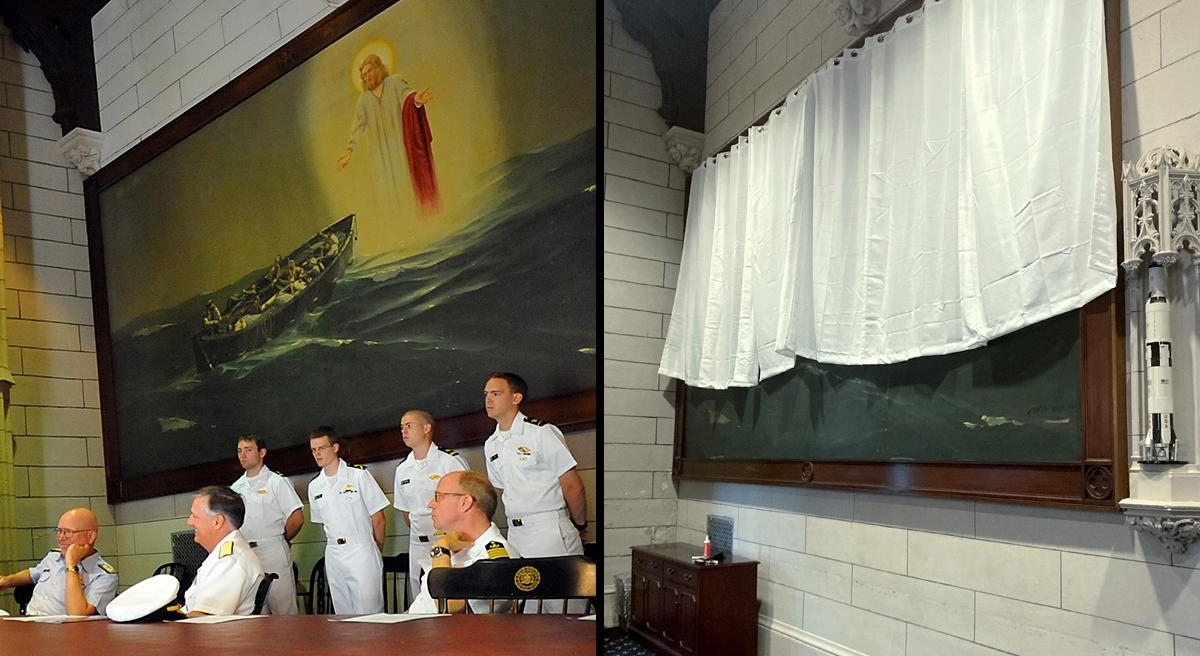 (JTA) — The painting in a key room in the U.S. Merchant Marine Academy was as striking as it was massive: Jesus, his arms outstretched, hovered over a lifeboat packed with grateful sailors, lost at sea.

Eighteen people — including five Jews — among the school’s thousands of midshipmen, alumni, staffers and faculty decided they did not want to see such a sectarian symbol in a room that is home to events, classes and ceremonies where attendance is mandatory. Last week, they asked the Military Religious Freedom Foundation to appeal on their behalf to the academy, which reports to the U.S. Department of Transportation.

The foundation aims to help troops across the U.S. military services seek redress for religious discrimination, often helping them remain anonymous in a culture where complaints have been met with retaliation. The group asked Joanna Nunan, the academy’s superintendent, to remove the painting to a more appropriate venue, perhaps a chapel.

In a Jan. 10 letter, Mikey Weinstein, the foundation’s Jewish founder, said the role the Elliot M. See room played at the academy made the presence of the massive painting especially inappropriate. It has served as a classroom, a venue for advisory board meetings, the room where incoming classes have their IDs processed, and as a court for disciplinary hearings, among other uses.

“The outrageousness of that Jesus painting’s display is only further exacerbated by the fact that this room is also used regularly for USMMA Honor Code violation boards where midshipmen are literally fighting for their careers,” Weinstein wrote.

Nunan replied immediately, a pleasant surprise for Weinstein, who often is involved in extensive battles with government and military officials. The size of the painting meant that it was impossible to move, she said, but she had another solution.

“I have asked my staff to purchase a curtain to be placed in front of the painting,” she said. “This will completely block the painting from view, but also allow those who wish to view it the opportunity to do so. Second, I have asked the Director of the American Merchant Marine Museum to prepare a plaque that explains the history of the painting, which will be installed near it. Given the size of the painting, there is no other location to which it can be moved.”

Curtains were in place by Friday, although the simple white one in place now is temporary; Nunan said she would soon have in place curtains that “befit the elegance” of the setting and would leave them over the painting during any events that required mandatory attendance.

Weinstein said Nunan’s solution was appropriate, even thought he had sought the painting’s removal.

“We think this is a superb solution,” Weinstein told the Jewish Telegraphic Agency. “It will be a teachable moment every time somebody asks why those curtains are up there.”