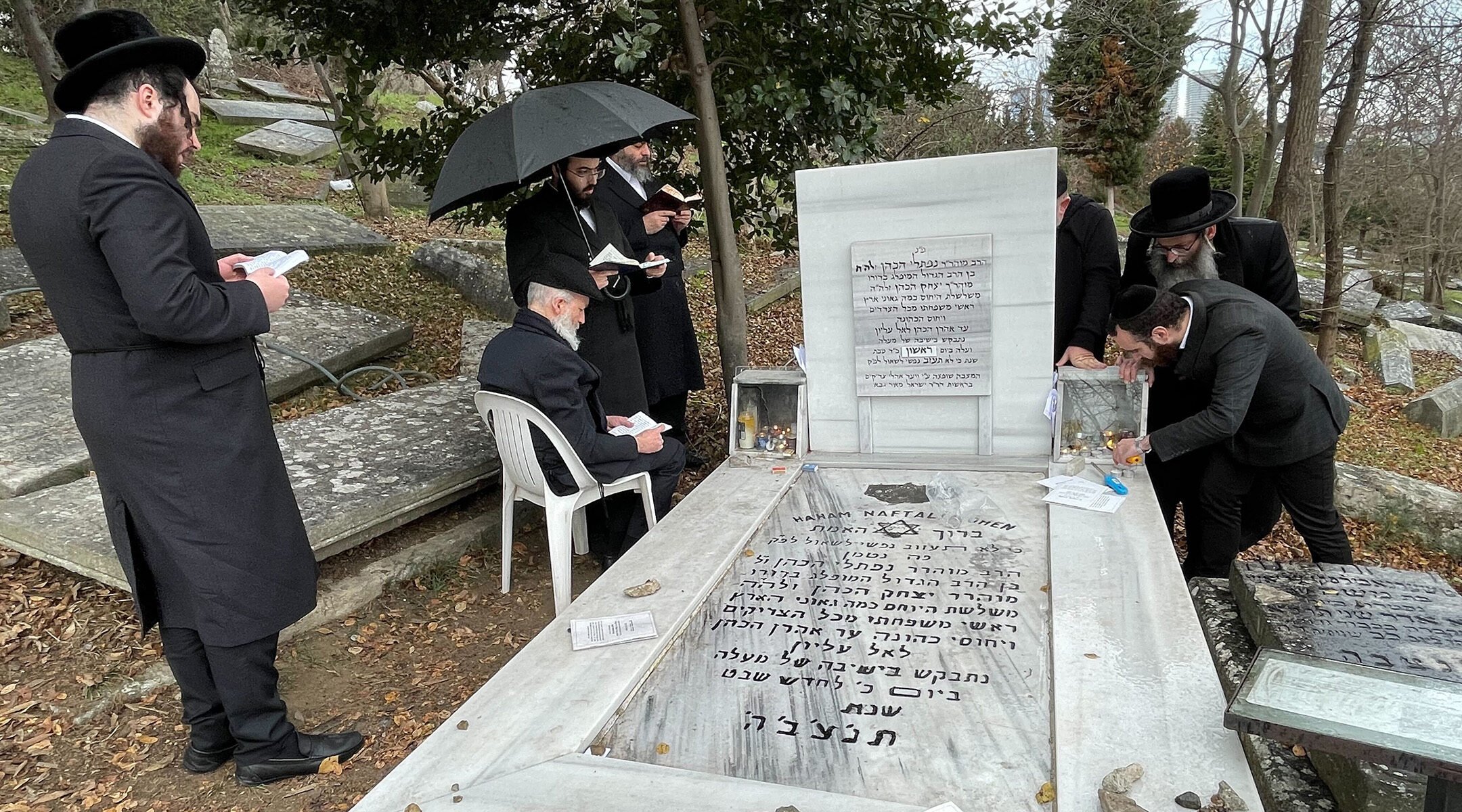 Haredi Orthodox pilgrims pray at the grave of Rabbi Naphtali Hakohen Katz, a 17th-century Kabbalist, in the Ortakoy neighborhood of Istanbul, Jan. 17, 2023. (David I. Klein)
Advertisement

Above them, guarding the hilltop, stood a Turkish military base, and below sat the lively Istanbul neighborhood of Ortaköy. Dominating the view was the 15th of July Martyrs Bridge, which connects Europe and Asia. On the Asian side of the Strait loomed the massive Çamlica Mosque.

None of those sites were of interest to the crowd, however. The hill also contains one of Istanbul’s main Jewish cemeteries, and those gathered — who came from Turkey, the United States and Israel — were there to pay their respects on the yahrzeit, or death anniversary, of Rabbi Naphtali HaKohen Katz, an influential and prolific 17th-century rabbi who was devoted to Jewish mysticism.

Pilgrimages like this one, made by Orthodox groups of varying sizes to the grave sites of similarly revered Jewish figures across Europe, are far from uncommon and have spawned a cottage travel industry. Among the largest and most publicized is the annual pilgrimage to Uman, Ukraine, which brings tens of thousands to the grave of Rabbi Nachman of Breslov each Rosh Hashanah (not on the anniversary of his death). Another involves the grave of Rabbi Elimelech Weisbaum, an early Hasidic leader, in Lizhensk, Poland, in the early spring. 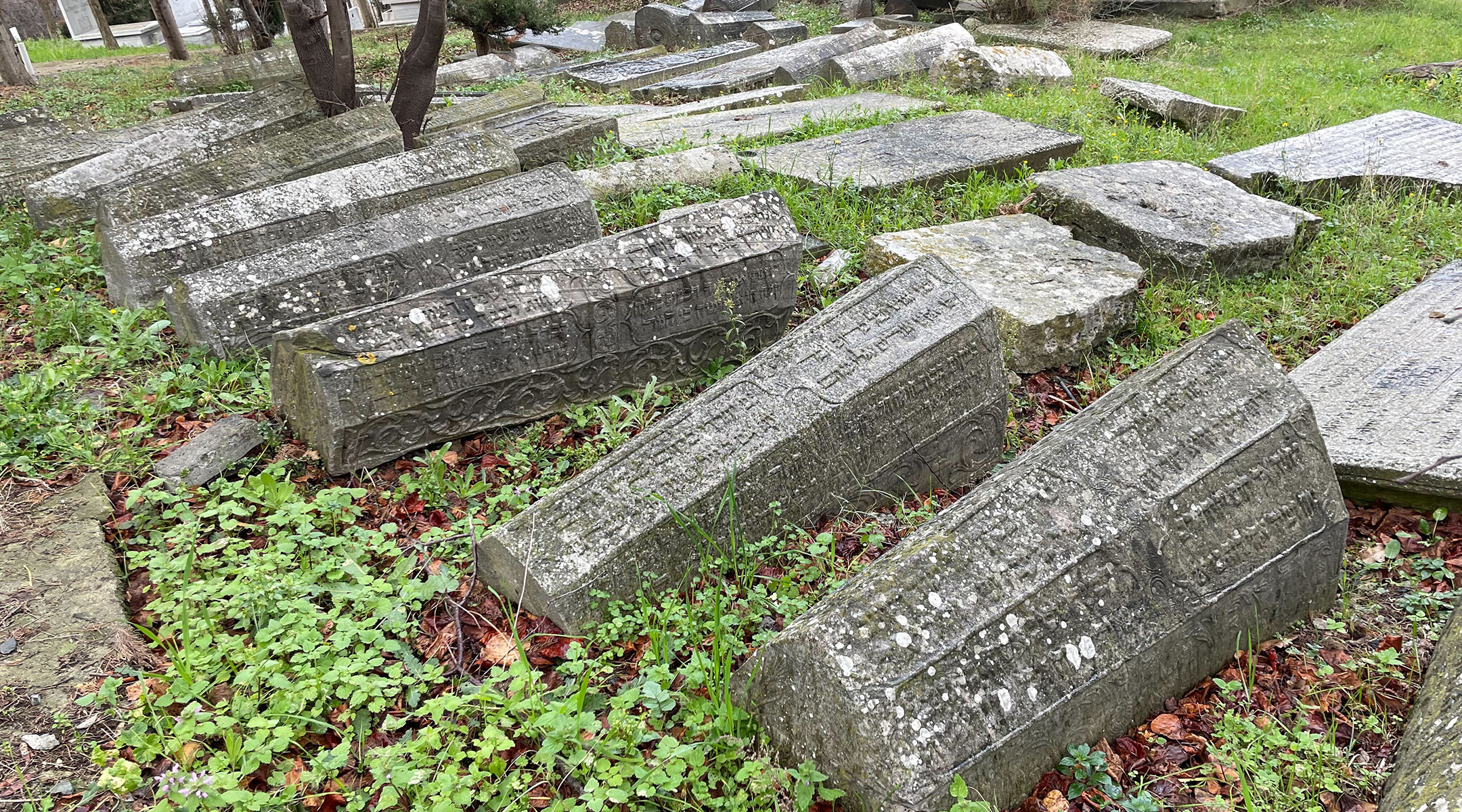 Yitzhak Friedman, a Hasidic Jew from Lakewood, New Jersey, who is currently studying in Israel, told the Jewish Telegraphic Agency that he and a few friends used the opportunity of Katz’s yahrzeit to rationalize a short trip to Istanbul.

“It was cheap tickets, we heard a lot of great things, so I had a nice jump over for two days,” he said.

Another group of Orthodox women from Israel said they had planned their trip similarly to coincide with the “hilulah” — using the Hebrew word for such a pilgrimage.

Though the pilgrimage to Uman has become a rowdy days-long affair, during which the influx of Orthodox Jews rent out most of the small city’s available apartments and hotel rooms, other pilgrimages, such as the one to Katz’s grave, have a more quiet and introspective atmosphere. The crowd on Tuesday took breaks from praying to eat at the cemetery’s synagogue, passing around whiskey and snacks.

Friedman said that he has made several similar journeys in the past year alone, including to Dynow, Poland, to the grave of Reb Tzvi Elimelech Spira, another early Hasidic leader. He also spent more than 30 hours traveling to war-torn Ukraine to spend Rosh Hashanah in Uman, a practice that was strongly discouraged by both Israeli and Ukrainian rabbinic leaders this year. 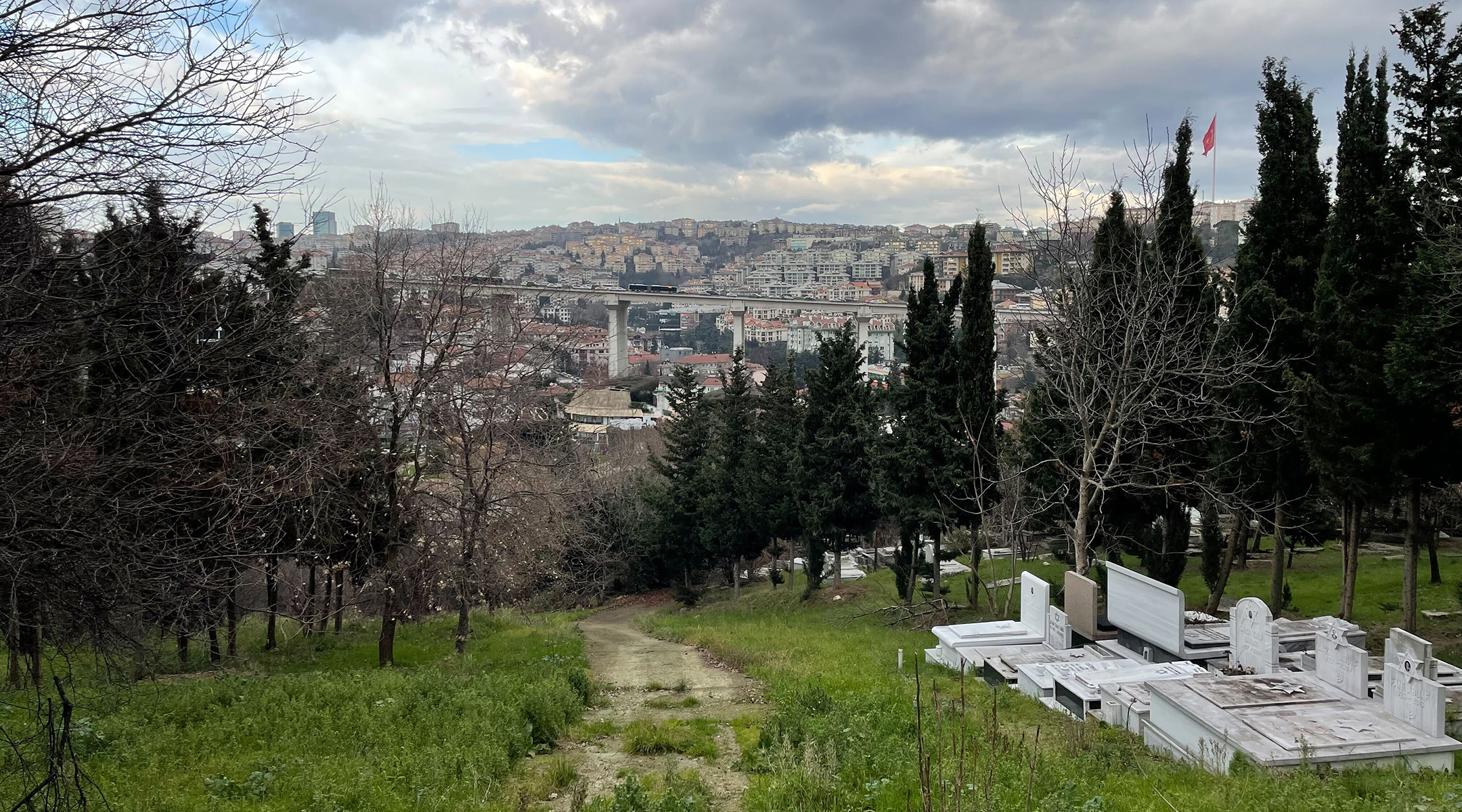 The Jewish cemetery where Katz is buried offers a hilltop view of the city. (David I. Klein)

Friedman said he had heard that a visit to Katz’s grave had helped people with various things, from finding “the right match” to having kids have kids to being cured from a sickness. He asked simply for “happiness” in his prayers.

He also attributed some of the effects of the grave to the fact that it is visited less than the one in Uman.

“It’s known that a tzaddik that very few people come to, his powers are much bigger,” Friedman said.

Another of the pilgrims, a Hasidic man from the Doroger sect in Bnei Brak, Israel, explained that he was a distant descendent of Katz, and that, though he was coming for the first time, he came to accompany his father who had been making the trip for 50 years.

Katz was born in 1649, in what is today Ostrovo, Ukraine, and at the age of 14 he was captured and sold into slavery by Tatars, a Turkic muslim group in Crimea and other parts of Southern Ukraine. But he escaped years later and returned to Ostrovo to become the community’s rabbi, later transferring to Posen in modern-day Poland, where he became a scholar of Kabbalistic literature.

But his struggles would not end with the Tatars. Later in life, Katz was called to Frankfurt, in today’s Germany, to serve the community there. When a fire broke out in the city in 1711, he was accused of using kabbalistic charms to stop it from being extinguished by natural means and imprisoned by the local leadership.

Upon his release, he fled to Prague — where he quarreled with another Kabbalah teacher devoted to Shabbetai Zevi, a false messiah — and later Wroclaw. 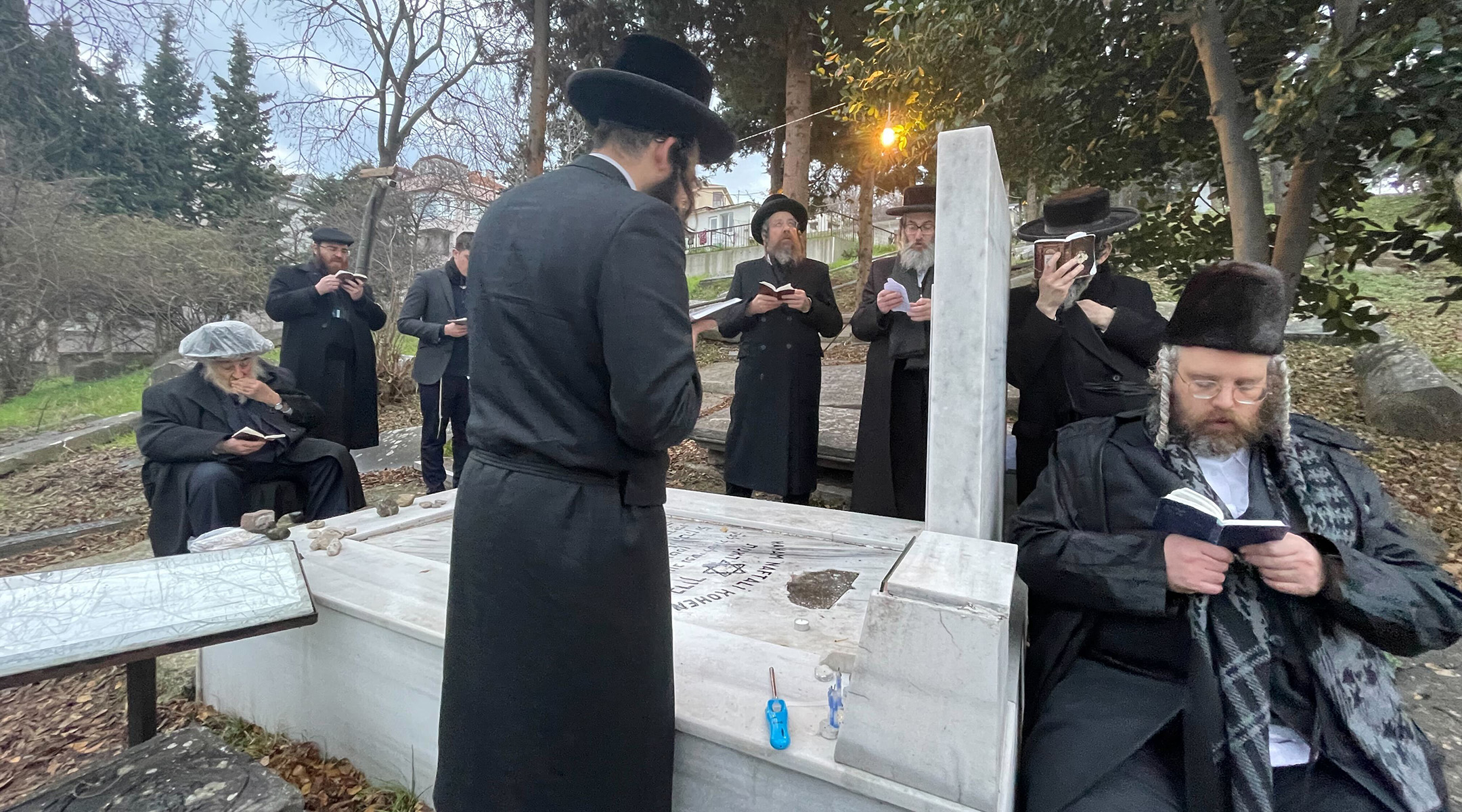 In past years, as many as 300 people at a time have visited the Istanbul cemetery. (David I. Klein)

After a life filled with struggle in Europe, Katz tried to emigrate to the holy land but only made it as far as Constantinople, where he died in 1718, and was buried by the local Jewish community in the Ortaköy Cemetery.

Ever since, the grave has been a site of pilgrimage, explained Rabbi Mendy Chitrik, an Istanbul rabbi affiliated with the Hasidic Chabad-Lubavitch movement — and another distant descendent of Katz’s — who helped in the restoration of the grave in 2005.

“Throughout the ages some great rabbis have allegedly made the pilgrimage,” Chitrik said, including the Baal Shem Tov — the founder of the Hasidic Judaism — Rabbi Nachman of Breslov and others.

“I have accompanied great rabbis who came anonymously to pray at his grave,” Chitrik added. “Some fly in for a day on private jets and leave.”

While some people come throughout the year, the most popular time to come is Katz’s yahrzeit, the 24th of Tevet on the Hebrew calendar. In past years, as many as 300 people came for the occasion, said Albert Elvaşvili, the president of the Ortaköy Jewish community which manages the cemetery.

“For us, as the Ortaköy Ets Ahayim family, it is our duty from generation to generation to keep this community alive and have visitors from all around the world to host this pilgrimage for,” Elvaşvili told JTA. Ets Ahayim is the name of the synagogue in Ortaköy.

“We are a small community and always need help from all to take care of this site and foundation, which is a very important part of the historical Turkish Jewish and world Jewish heritage, but we look forward to see many visitors every year, even if we are few in number,”  he added.

However, he noted that attendance often rises and falls with the changes in Israeli-Turkish relations, much like general Israeli tourism to Turkey, which reached an all time high this year.

The biggest slump came during the COVID-19 pandemic, with only a handful of pilgrims coming the last two years. Now it seems that the tradition is once more back in force, with several buses of pilgrims from different countries and sects coming throughout the day.

“As relations with Israel and the Jewish people are coming to a better place, I believe there will be many more people coming in, and as Turkey becomes much more attractive for the Jewish and religious traveler, there will be many more opportunities for people to come,” Chitrik said. “Not just to the kever [grave] of Naphtali Katz on the 24th of Tevet, but to Rabbi Chaim Palachi in Izmir, on the 19th of Shevat, next month, and Rabbi Yehudah Rozanes, on the 26th of Nisan, and many other rabbis who are buried here in the important cemeteries of Turkey.”