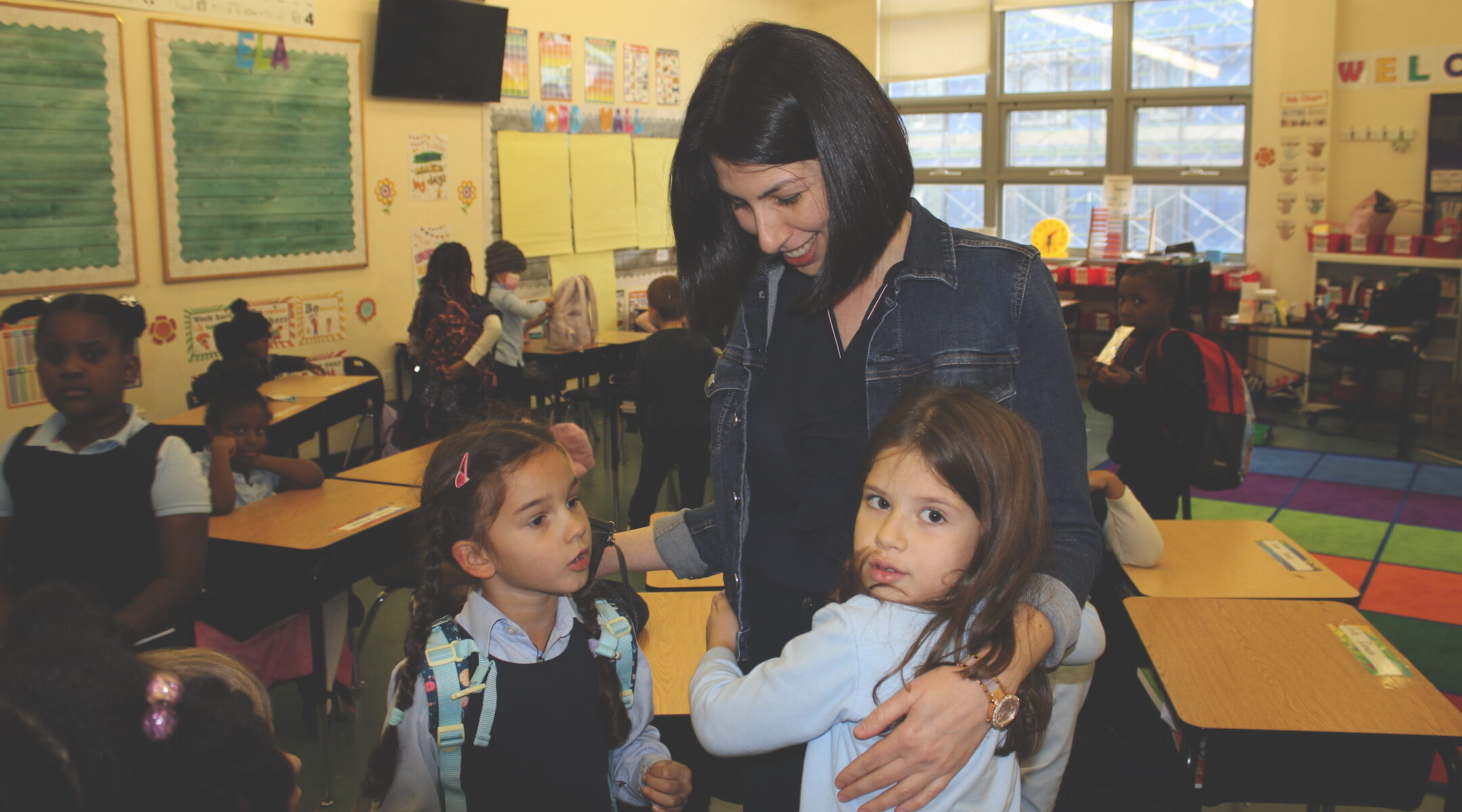 Nina Henig, special education teacher at the Hebrew Language Academy in Brooklyn and a native Russian speaker, has been the main point of contact for the Ukrainian students and their families who have joined the school since the start of the school year. (Annika Grosser)
Advertisement

(New York Jewish Week) — When the fire alarm went off at Hebrew Language Academy in Mill Basin, Brooklyn, most of the students knew the routine: They lined up behind their teacher and got ready to calmly leave the building. They were familiar with the mandatory fire drills, a regular part of American school life.

But for some of the children — recent arrivals from Ukraine — the drill was a frightening experience. They crouched on the floor and put their hands over their heads. “We had students that thought it was an alarm or an explosion and they took cover as we were leaving the building,” said Daniella Steinberg, the head of the school.

The Hebrew Language Academy, one of three Hebrew charter schools in New York, accepted more than 60 Ukrainian students at the start of the 2022-2023 school year. The refugee children are adjusting to not one but two new languages — English and Hebrew — and to a whole new way of life, far from the devastating war that has engulfed their home country.

The initiative was started at the end of the last school year by Valerie Khaytina, chief external officer at Hebrew Public, the national movement of Hebrew charter schools, who is herself a Ukrainian with ties to a family fleeing the war-torn country. She was looking for a way to help her acquaintances and others who had to flee Ukraine since the start of the war, so she promoted the school on social media groups geared towards refugees.

Lesya Rybchynsky and her twins, Stefania and Mykola, were the first Ukrainians to enroll at the school. When, halfway through the semester, the family moved to Forest Hills, Queens, and then to Ukrainian Village — an immigrant enclave near Manhattan’s Washington Square Park — they insisted on staying at the school. “No Mommy, we don’t want to leave school,” Rybchynsky remembered them telling her.

Rybchynsky shared her positive experience on social media. “This school is the best,” she said. “They helped my children with everything. With food, clothing, computers.” Her posts on social media brought in a wave of other Ukrainian families that had just come to New York and were looking for a school.

“Even today, we had a new student register,” Steinberg said when she spoke to the New York Jewish Week in October. “As soon as they come, we take them.”

Since then, the school has enrolled several new families and is still accepting students.

To make sure they were prepared for the new students and their needs, the school had to make some structural changes: Nina Henig, special education teacher and a native Russian speaker, was promoted to a new role as the director of the multilingual learners department. She was thrilled to take the job.

Most of the Ukrainian children did not come to the school speaking English. However, many of them speak multiple languages, and have some knowledge of the English alphabet — “sometimes more than you would expect,” said Michael Moore, English teacher and founder of the multilingual learners department.

Henig and Moore pull the students out of their regular classes at least once a day to work with them in small groups. “A lot of it is just survival English, initially,” said Moore. “You’d have to be there. It involves a lot of body language.”

The American students at the school, from kindergarteners to eighth-graders, have been a big help in supporting their Ukrainian classmates. “There’s been no sort of culture shock on either side,” said Moore.

Two older students even volunteered to help the new children with their classwork during lunch. “We’re really, really proud of our kids,” said Steinberg. She recalls seeing the students trying to communicate with each other through Google Translate while waiting for the bus. “It’s been a really beautiful thing to watch.”

But English is not the only new language the Ukrainian students are learning: The charter school also teaches modern Hebrew. Opened in 2009, the Brooklyn school was the first established by the Hebrew Charter School Center (now known as Hebrew Public), a network founded by hedge funder Michael Steinhardt and others (in an effort that predated accusations that Steinhardt propositioned and made sexually inappropriate remarks to women in his role as a philanthropist). 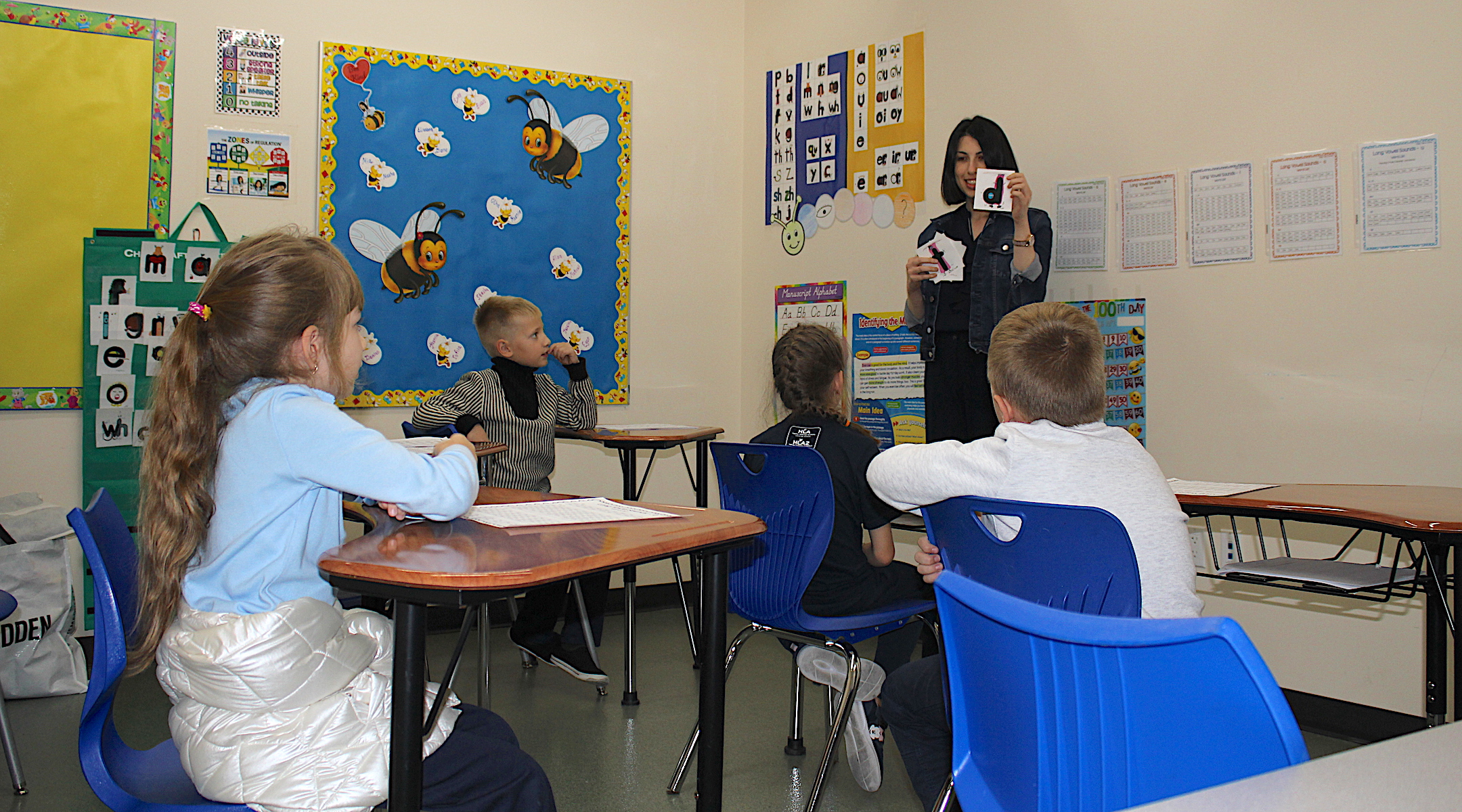 Most of the Ukrainian children did not come to the Hebrew Language Academy speaking English, but many of them speak multiple languages and have some knowledge of the English alphabet. (Annika Grosser)

As schools that are publicly funded but privately managed, the Hebrew charters do not provide religious instruction but teach Hebrew language and also offer instruction about Israeli history and culture. The school was diverse even before the influx of Ukrainian children: In 2021, 70% of its 600 students were Black, 20 percent were white and 8 percent were Hispanic and other.

“It kind of gives everybody an opportunity to jump in together,” said Steinberg. “Definitely levels the playing field a little for many.”

In many ways, Henig has been the main point of contact for the Ukrainian students and their families. When the school bell rings, the Ukrainian students run up to her and tell her with excited voices about their day in Ukrainian or Russian (about 68% of Ukrainians speak Ukrainian as a first language, and about 30% of Ukrainians speak Russian as their first language) — with one exception: a little boy who is scared of the school bus and usually gets nervous and quiet at the end of the school day. He and his sister have been living in a shelter in the Bronx and have had to commute three hours every day to get to the school. Their mother does not feel comfortable sharing their names.

“They are not living in good conditions,” said Henig. The family has since moved in with friends because they were not able to stay at the shelter any longer.

Henig has been trying to assist wherever possible and started collecting clothing donations for them. At the end of the school day, she picks the boy up at his classroom, takes him by the hand and leads him downstairs. In the hall leading to the buses, he stands in his oversized shirt that matches the dark circles under his eyes and waits for his sister to get out of class. But when the other Ukrainian students show up, his face lights up.

Helping the students adjust to their new environment is not an easy process. “I think the greatest challenge is the trauma that they have experienced,” said Steinberg.

Such trauma can be triggered in everyday situations, like a mandatory fire drill. The teachers had a faculty meeting with an expert on post-traumatic stress and tried to prepare the Ukrainian students by explaining the drill to them beforehand, but some of them still went down to the floor and put their hands over their heads.

“It kind of breaks our hearts,” said Steinberg. “Things that we can’t fix overnight and things that we feel a little bit powerless over and sad for them.” Professional expertise was needed. The school decided to hire a social worker from Ukraine to provide at-risk counseling and other emotional support to the Ukrainian children, three days a week.

With all the stress and trauma that the children have been through over the last months, it is a rewarding experience to see them opening up to their new environment. “I was worried that they wouldn’t be happy. But they are and they are excited to come to school,” said Steinberg. “It’s just the kids starting to feel comfortable, starting to speak English, starting to talk to us, where at the beginning they were so afraid. Those are the moments we’re trying to hold on to.”