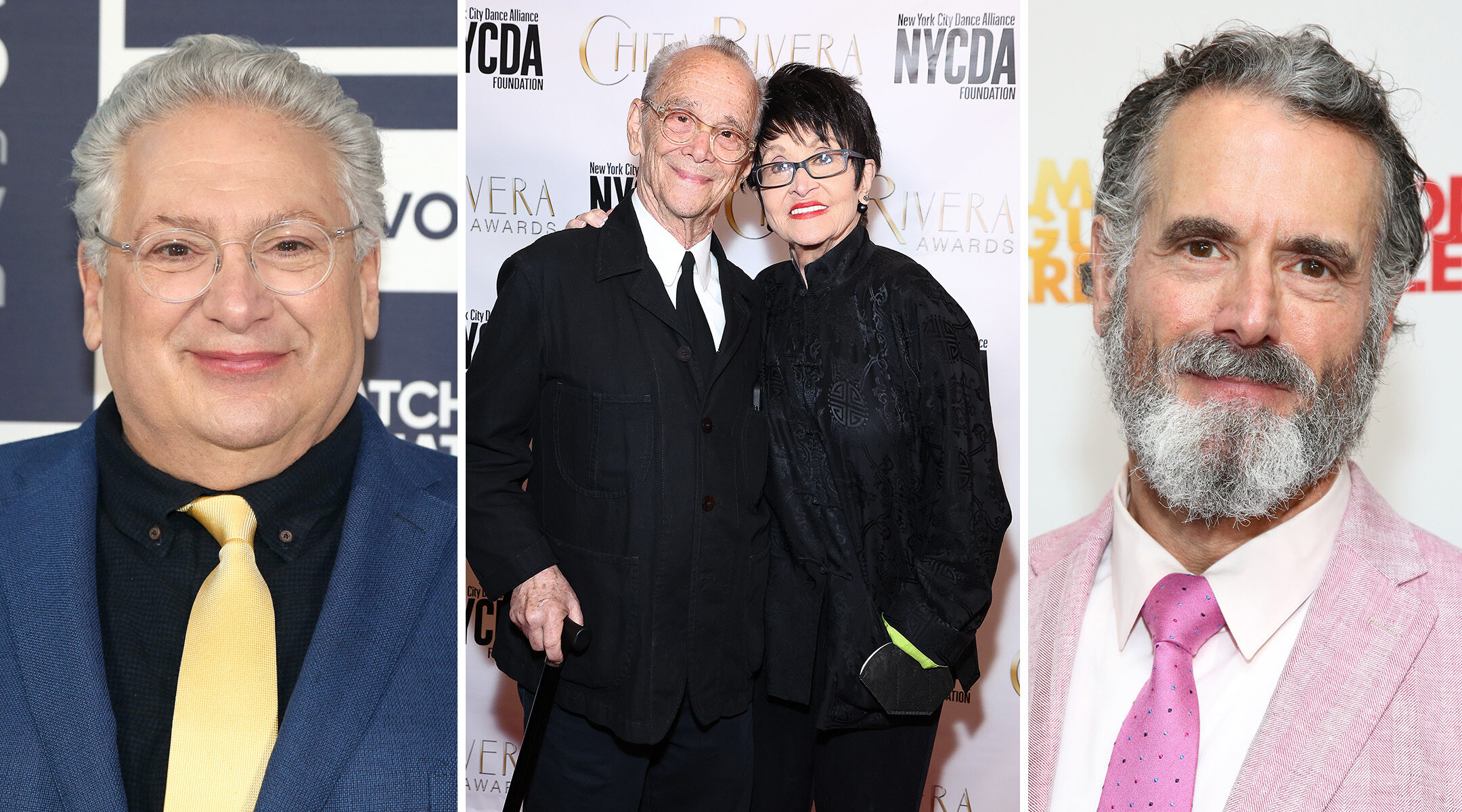 Harvey Fierstein, Joel Grey, Chita Rivera and Steven Skybell are among the dozens of performers at the "We Are Here: Songs from the Holocaust" concert at Carnegie Hall on January 26, 2023. (Bruce Glikas/Getty Images, Arturo Holmes/Getty Images, Michael Loccisano / Getty Images) (Design by Mollie Suss)
Advertisement

(New York Jewish Week) — More than a dozen songs written by Jews imprisoned in concentration camps and ghettos during the Holocaust will be brought to life at Carnegie Hall this week as part of a commemoration of International Holocaust Remembrance Day.

Featuring Broadway bigwigs and performers such as Harvey Fierstein, Chita Rivera, Mikhl Yashinsky and Joel Grey, the one-night-only “We Are Here: Songs from the Holocaust” performance will take place on Thurs., January 26 at 7:30 p.m.

“I know a lot about music — I’ve spent my whole life doing it — and I never knew there were songs that came out of the camps and the ghettos,” said music producer and composer Ira Antelis, who conceived of the concert several years ago. “I knew there was classical music in Theresienstadt, but I was not familiar with what I call the ‘Bruce Springsteen’ or ‘Pete Seeger’ music of the camps.”

As it turns out, however, hundreds of what might be called folk and popular songs were written — mostly in Yiddish — by Jews in concentration camps and ghettos. In the decades following the war, many were published in newspapers, songbook collections and memoirs in Europe, Israel and the United States.

The “We Are Here” concert draws its name from one such songbook, titled ““We Are Here: Songs of the Holocaust,” which was compiled in 1983 by Eleanor Mlotek and Malke Gottlieb, with a foreword by Elie Wiesel. Antelis discovered the book while doing research on Wiesel after his death in 2016.

Shortly after he read the songbook, Antelis, who lives in Chicago, was visiting family in New York when he ran into an old friend, Rabbi Charlie Savenor. A former educational director at Park Avenue Synagogue, Savenor was teaching a class on Holocaust memoirs there at the time.

“Keeping a memoir, hiding it, and making sure that whether or not you live and die your experience would be remembered was an act of deep resistance,” said Savenor, who is now the executive director of Civic Spirit, an organization that advocates for civic education. “Writing this music and these songs was doing the same exact thing.”

It felt like fate that the two had reconnected after 15 years, and they decided to collaborate on the project.

Initially, the pair planned to mount a concert just using songs from the “We Are Here” anthology. But when the pandemic put everything on hold, Antelis used the time to do additional research — which led him to discover a 2014 doctoral dissertation that had compiled research about 14 additional songbooks published between 1945-1949. Each of these volumes was filled with dozens of songs from a particular camp or ghetto — songs from Bialystok, Vilna, Munich and others.

“This is our concert,” Antelis thought.

Newly reinvigorated, the concert he was conceiving would feature one song from each songbook.

“What better way to say ‘We Are Here’ than to carry on somebody’s voice from 1940, who was murdered?” Savenor said. “We have the opportunity to do that.”

The first-ever concert of these songs was produced last year at Chicago’s Temple Sholom. That program was on Yom HaShoah, so it included a yahrzeit candlelighting and several speeches. This year, by contrast, the concert will focus almost entirely on the music and the performers, many of whom are no strangers to drawing crowds.

Though many of the songs featured in “We Are Here” have been translated into English, several will be sung in their original Yiddish, including “Minutn Fun Bitokhn” (“Minutes of Faith”) by Mordechai Gebirtig. Sung by Steven Skybell, who is coming off of a seven-week off-Broadway run as Tevye in “Fiddler on the Roof in Yiddish,” the song will open the concert.

“One of the most heartbreaking and amazing things about Yiddish songs, in general, is that they don’t shy away from putting into song every aspect of the Jewish life,” said Skybell, who began seriously learning Yiddish during the pandemic. “It’s really unlike any other type of music I’ve ever seen, in that it does not shy away from ugly reality and sometimes hopeless situations.”

At the same time, however, Savenor said he is surprised at how uplifting many of the songs are, considering the horrible circumstances their writers were enduring. “This is not the Mourner’s Kaddish for an hour and forty five minutes,” he said. “It’s just people talking about love and relationships, and dreams and aspirations. It’s a lot more about life than it is about mourning.”

Each song will be introduced by a presenter who will share a brief personal anecdote relating to the Holocaust. Along with hosts Antelis and Savenor, these presenters include Jack Kliger, the president and CEO of the Museum of Jewish Heritage; Scott Richman, director of the New York and New Jersey branch of the Anti-Defamation League and Cardinal Timothy Dolan, the archbishop of New York.

The diversity of the presenters and performers is intentional, said Antelis and Savenor, emphasizing that part of the purpose of the concert is to showcase a coming together across races, religions and ethnicities. The aim, they said, is to show unity and entrench the message of “never again.”

That’s also why the concert is being presented at historic Carnegie Hall, rather than a synagogue. “To have the sounds of Yiddish reverberating in Carnegie Hall gives me special delight,” said Skybell. “The fact that Yiddish is alive and well and we hear it at Carnegie Hall — it’s just to say that we are here, we’re not going away and we won’t be silenced.”

Proceeds from the performance will be donated to the Illinois Holocaust Museum. Though it will not be recorded for the public or live streamed, Antelis and Savenor said they hope to bring the production around the country and even to Europe to perform the songs at the sites of the ghettos and camps where they were originally composed.

“With everything that’s going on, we cannot be silent — people need to step up. If we don’t stand against antisemitism and hate in every facet, then who are we?” Antelis said. “I think this is the most important concert in many, many years, especially in our culture.”