Yiddish ‘Fiddler on the Roof’ returns to New York this fall 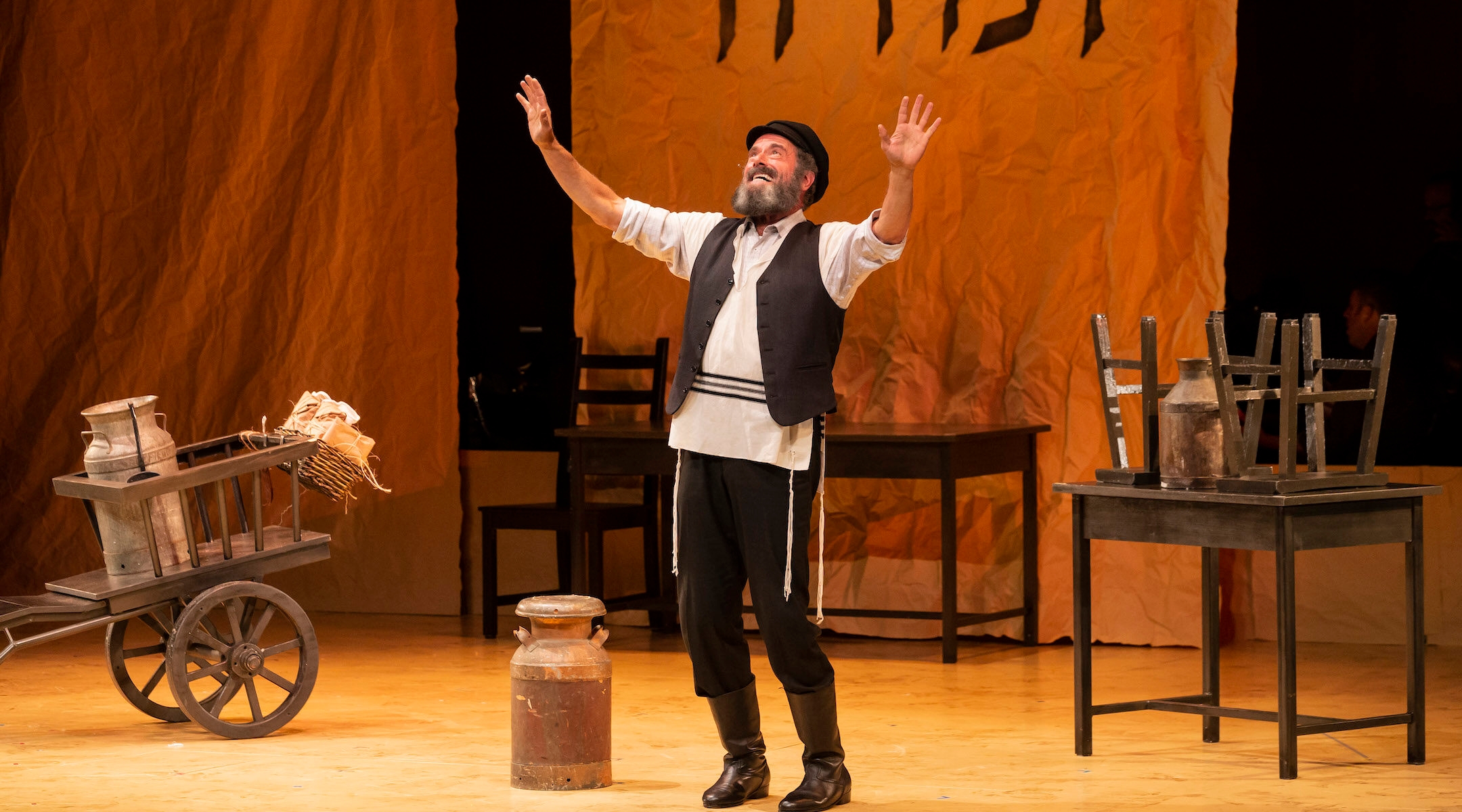 Steven Skybell as Tevye in the 2018 production of Fiddler on the Roof in Yiddish at the National Yiddish Theater Folksbiene. (Lev Radin)
Advertisement

(New York Jewish Week) – “Fiddler on the Roof in Yiddish” will return to New York at the Off-Broadway New World Stages in Midtown this fall for a seven-week run.

“Fidler Afn Dakh,” the first-ever North American performance of the Yiddish version of the 1964 Broadway musical “Fiddler on the Roof,” premiered at the National Yiddish Theater Folksbiene in 2018. It was an unexpected smash success, earning a New York Times Critic’s Pick and a Drama Desk Award. It was extended several times at the Folksbiene and eventually moved Off-Broadway before plans for a national and international run were halted indefinitely due to the pandemic in early 2020.

The upcoming run, produced by the Folksbiene, begins November 11 and will feature much of the original cast. It will again be directed by Oscar- and Tony-award winner Joel Grey.

Ahead of the show’s return, the New York Jewish Week chatted with Steven Skybell, who has played Tevye in many different productions of “Fiddler” —  including the previous Yiddish run and the forthcoming one — and Zalmen Mlotek, the longtime artistic director of the Folksbiene. They spoke about the significance of “Fiddler” in today’s world, how the show has impacted their lives and what a resurgent interest in Yiddish means for the Jewish community.

This interview has been lightly edited and condensed. 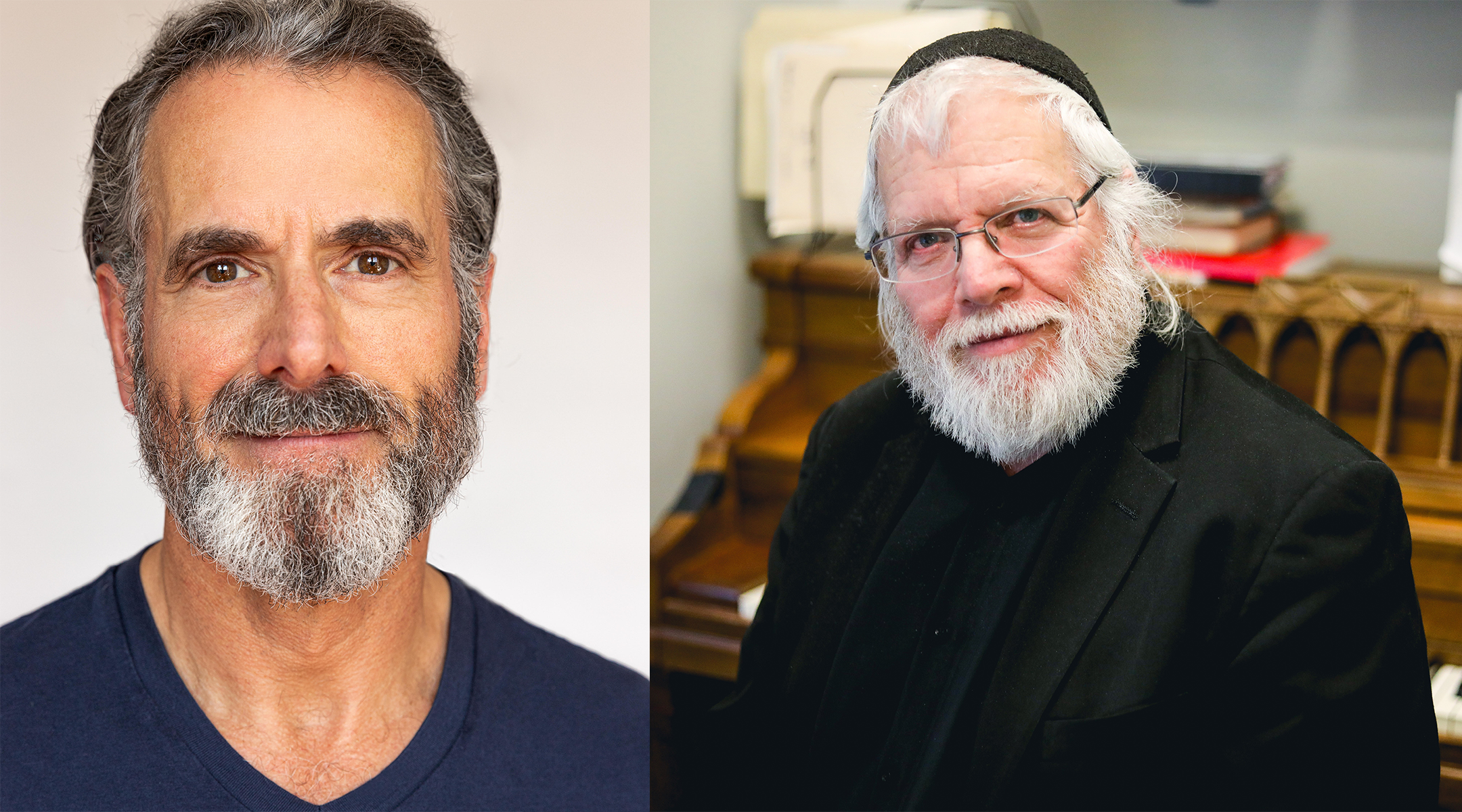 New York Jewish Week: “Fidler Afn Dakh” was going to go on an international and national tour, but then COVID happened in March 2020. Over the past two and a half years, have you been able to reflect on the success of this production? Anything that might influence the next version of it?

Zalmen Mlotek: The word of mouth on the show was so strong that I hope that all those people who didn’t get to see it will decide, “OK, here’s our opportunity to come see it.” Especially now, the timing couldn’t be — I want to say better, but really it’s worse, in terms of what’s happening politically to the world and how absolutely direct the show is. Having the experience of seeing and hearing Ukrainian Jews speak Yiddish in the 19th century and understanding what’s happening today — we’re talking about the same earth, it’s just another century. [Anatevka, the fictional shtetl in which the musical is set, would have been in Ukraine, then under Russian control.] It’s pretty mind-boggling for us as we prepare this now.

Stephen Skybell: When we did Yiddish “Fiddler” before, we had the shootings at the Tree of Life synagogue in Pittsburgh. So it wasn’t that the previous Yiddish “Fiddler” was void of any horrors for the Jewish world. The amazing thing about “Fiddler” is that, as entertaining as it is and as classic as it is, the bones of it and the message of it are so deep and so needful today. So I can only imagine that, as meaningful as our production was when it was done before, it’s going to have a greater depth and impact given what is happening in Ukraine and the world.

That, to me, is a real joy as a performer, as an actor, as a storyteller: to be able to offer entertainment and laughs, but then also the final movement. This is a story about a family and a little town in 1905 in the Pale of Settlement in Russia, but the final moment is about a group of people being ostracized and thrown out of their homes. The message wants to really land for our world today. That’s the amazing thing about “Fiddler” — it has much more than just laughs and tunes. It really has a deep meaning that is needful for our time.

Skybell: That’s a big question. It’s emotional for me. I’m amazed again and again at how, with all the blows that Tevye suffers, he does not crumble. His spirit may flag but it always rebounds. That is a real lesson for me — as terrible as things can get, and as dire as it can feel, one just has to rebound and look for a positive anywhere one can. That is what Teyve does again and again. I love that about him and it really is something to admire and hold on to.

Skybell: I had a Holocaust survivor come to me at the Museum [of Jewish Heritage in Manhattan] when we were performing there and he wanted to know if I thought the ending was positive or not, hopeful or not. To me, the hopeful gesture of the final moment of “Fiddler” is that Tevye nods to the fiddler to come along. Wherever they’re going, they’re taking whatever the fiddler represents with them — which is the traditions or the shtetl or the Jewishness or the precarious life they’ve always known. He’s saying, “come with us,” and I take that gesture as a hopeful gesture. I used to always think that the end of the play was saying, “Tevye, you’re going to go to America and you’re probably going to be successful and you’re going to have a grandson and he’s going to be like me.” So that’s a win.

But now I see more the idea that you’re thrown out of your home and you must turn your back on everything you knew. It’s harder to find a silver lining at the end of this play than I used to in my adolescent understanding of what it was to be an immigrant coming to America, the land of opportunity — even knowing that there’s not always an open door, even in America. And once you’re in America, there’s no guarantee that things are gonna go well for you. So that has changed for me given the events of the world, and growing older.

Mlotek: I also believe that people’s sensitivity — although so many of us are sensitive to the refugee crisis wherever it is, and particularly from Ukraine — but I believe that seeing it and hearing it portrayed honestly, in the way that we do, and giving a slice of history from another time brings the whole issue that much more present. I hope that will heighten people’s sensitivities to the plight of people around the world who are in refugee situations.

Why do you think audiences resonated so much with the show in Yiddish?

Mlotek: The amount of creativity around the world is pretty astounding in terms of what’s happening with Yiddish culture. It’s been growing and continues to grow. The idea of bringing this classic musical in its, one could say, original form, that Shraga Friedman (who wrote the Yiddish translation for an Israel production of the show in 1965)  was able to use actual quotes from the original Sholem Aleichem story makes it that much more poignant. What happened in the past, when people would see the show [in Yiddish], is that they stopped looking at the supertitles, because people either knew the story so well, or they wanted to test their own Yiddish knowledge. They wanted to immerse themselves in what they remembered this scene to be or this song to be about. It has a special resonance that everyone talked about when they saw it. There were people who didn’t want to come see it or they had seen many “Fiddlers” before, but once they understood the specialness of it all.

Skybell: “Fiddler” is about a family and a culture. People have said is that hearing this story in Yiddish felt like experiencing the show as the characters would have experienced it, but what they’re experiencing is “how to tell Dad I want to marry this other guy” and “what it is to have a wedding” or “what is it to welcome in the Sabbath.” All those joyous aspects of shtetl life are also portrayed. The musical is joyous beyond belief.

This was my first time ever to do a play in Yiddish. I loved the experience of it… The thing I love about it, and I think a lot of Yiddish speakers or even non-Yiddish speakers feel this, too, is that there’s something vital about Yiddish. It’s related to Hebrew, so it is spiritual, but also is very earthy and kind of blunt at times. There’s a humor, sometimes, in the sounds alone, and certainly in the reception of the sound. When Tevye comes on stage in the opening of the musical, and says [in Yiddish]: “It sounds crazy, no?” — just the word “meshuggah” jolts everybody. Even non-Yiddish speakers know the word and it places us in such a specific place and time and ethnic group. Somehow it electrifies in a way. We felt that every night. The Yiddish just zapped the audience, and I loved that.

Bonus question: After the pandemic hiatus, how does it feel to get the band back together, so to speak?

Mlotek: I’m also excited to bring back much of the company. Sadly, we’re not bringing back the entire company because of space in the theater. But hopefully we’ll know in a few weeks in terms of the casting but we’re hoping to reunite as much of this company as we can.

There was a special bond that we created, that the show created, that the audiences created. It was a big company of people together and when you saw the reaction from people across the spectrum — Jews, non-Jews, religious, non-religious — it was very gratifying for us as human beings.

Skybell: Speaking in the Yiddish gave a certain feeling of authenticity, but also, under the direction of Joel Grey, it became a special production of “Fiddler on the Roof.” It’s so delightful that we’ll be back in the room with him. He loves directing, and so I have no doubt that it won’t be a process of “don’t you remember?” Rather, he’s really going to find what we had anew.

The other thing I want to say is he’s gentlemen of a certain age, and he’s been in the business for very long time, and more than once he did comment to us that he had never seen a group of people work so lovingly together, and that his experience has not often been that in his career. I’m excited to be reunited with everyone and I’m just a little apprehensive that it will go as well as it did last time. We had our backs against the wall last time, it was a three-and-a-half week rehearsal, but I’m really excited to just be reunited. The idea of coming back together and having more time with this musical is something everybody is really looking forward to.