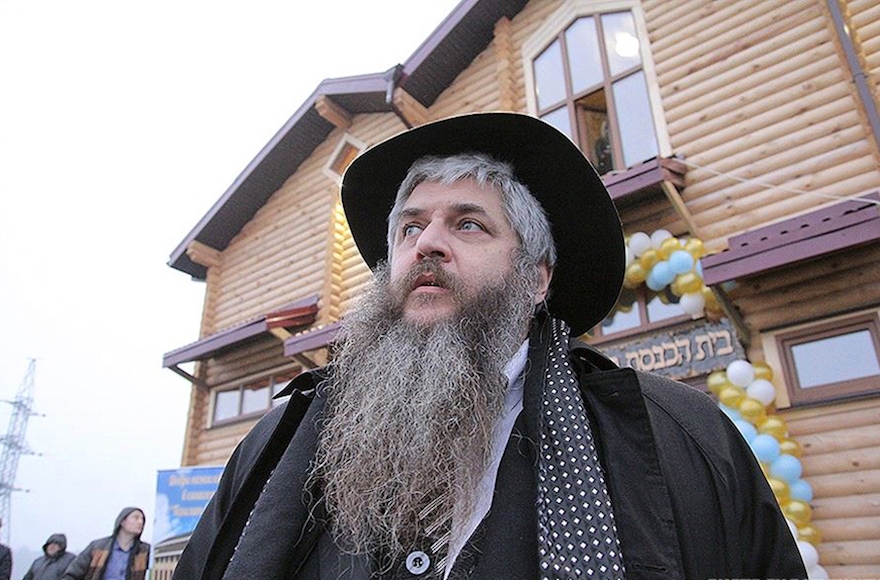 ANATEVKA, Ukraine (JTA) — At the age of 53, Sergey and Elena Yarelchenko fled their native city of Lugansk with three suitcases and moved into a wooden room in a muddy refugee camp outside Kiev.

Like hundreds of thousands of refugees from Ukraine’s war-torn east, life for this Jewish couple in 2014 went from a normal bourgeois existence to a hellish struggle for survival and flight from a city that within days became the arena for vicious urban fighting between government troops and pro-Russian separatists.

But unlike many refugees, the Yarelchenkos’ story is no tearful account of rootlessness.

Thanks to one rabbi’s unique project for Jewish refugees from the east, the Yarelchenkos are part of the nascent community of Anatevka, a small village that sprang into existence six months ago near the capital, where 20 families are now building a future based on Yiddishkeit and self-reliance.

READ: A ‘Fiddler on the Roof’-inspired refugee camp for Ukraine’s Jews

Named after the fictional hometown of Tevye the Dairyman from the famed Broadway musical “Fiddler on the Roof” – and the iconic Sholom Aleichem short stories on which it was based – Anatevka is a tribute not only to that town but to the real Jewish shtetls that dotted Eastern Europe before the Holocaust.

Spread on a plot the size of three football fields, Anatevka features a wooden synagogue with two mikvahs. A rickety path made of splintered wooden pallets connects the three-story synagogue building to a dormitory-style residence with 20 apartments and a central kitchen. A ways off is a school newly built from concrete with 25 classrooms.

“Our son in Israel is pressing us to make aliyah, but Anatevka looks like a better option for us,” said Elena Yarelchenko. 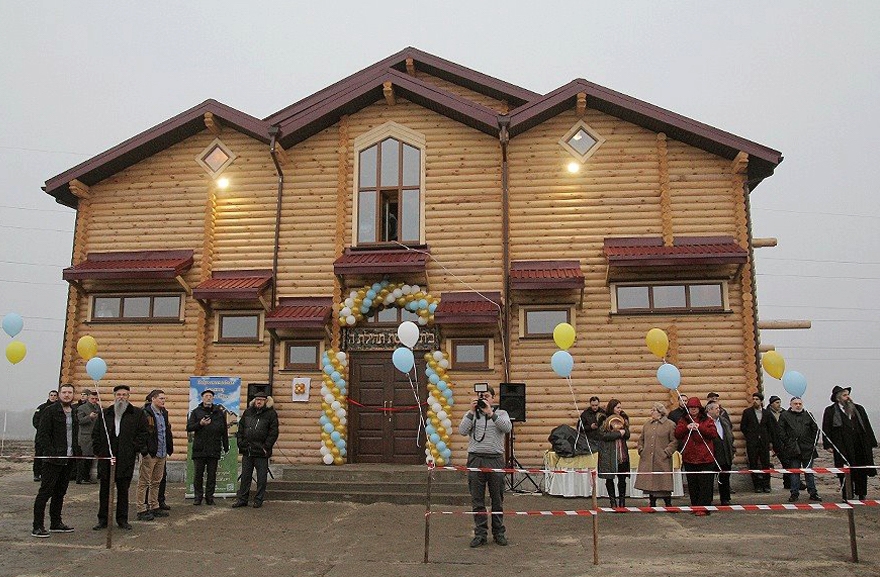 Jewish refugees at Anatevka celebrate the opening of the community’s new synagogue, Feb. 29, 2016. (Courtesy of the Office of Rabbi Moshe Azman)

Her husband, Sergey, is a carpenter making a small salary in Anatevka, which is largely built from wood. As she helps prepare food for all the other residents, Elena gestures at her husband’s small workshop outside the residential complex.

“Sergey’s a workaholic who either sleeps or works,” she said. “Do you think Israel’s holding its breath for a 53-year-old carpenter who doesn’t speak Hebrew?”

Between the school — the only structure in town that is not made of wood — and Anatevka’s muddy access road are the fresh concrete foundations for a clinic and rehabilitation center that workers, some of them local residents like Sergey, are laying under the watchful eye of the man who created Anatevka: Rabbi Moshe Azman of Kiev.

A burly man with a bushy gray beard and a full head of hair, the 50-year-old Azman comes into the residential complex and peels off several layers of thick snowy clothing in the foyer of the building, whose design is reminiscent of a rustic ski lodge.

“It can get pretty hot in here,” he notes with satisfaction at the effectiveness of the central heating system.

Working with money from his own pocket and private donors — they include the Moscow-born kosher food supplier Michael Zelman of London and the Dubinsky family from Kiev — Azman has spent more than $1.5 million on Anatevka, which he designed not only to serve as a refugee center, but as a living, breathing community.

A maverick rabbi who remained influential here even when he broke with the official institutions of the Chabad movement over a contractual dispute, Azman says he is “trying to survive from day to day” because of debts he incurred while realizing his plan for Anatevka, which critics doubted would ever come to pass.

“I’m aware of the risks I’ve taken,” Azman said solemnly, adding that he recently had to borrow money from a friend for gasoline so he could remain mobile throughout this week.

“I’m in debt to my eyeballs, but I’m not afraid because this is God’s mission. Besides, each day that Anatevka is running is another day that my community lives in dignity. Builds a future. You can’t put a price tag on that,” he said. 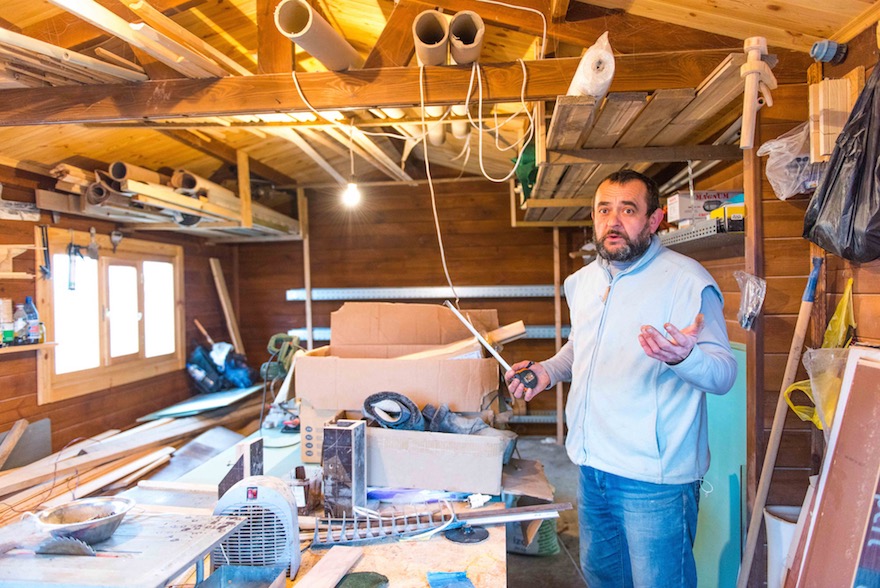 Carpenter Sergey Yarelchenko at his workshop in the Jewish refugee community of Anatevka, near Kiev, March 13, 2016. (Cnaan Liphshiz)

To keep Anatevka running, Azman has relied on donations also from members of his own community in Kiev, whose children account for the majority of the 150 pupils attending Anatevka’s school.

While residents provide much of the labor force at Anatevka, not all of them can work. Isaak Mohilevsky, an octogenarian from Lugansk who used to be the caretaker of that city’s synagogue, can barely walk. But he, too, is pulling his own weight: On Feb. 29, he received the keys to Anatevka’s new synagogue, which opened that day in a ceremony attended by Israel’s ambassador to Ukraine, Eliav Belotsercovsky.

“When I left, I never thought I’d have another synagogue under my care,” Mohilevsky said.

In its present (and unfinished) form, Anatevka is a confounding mix of novel and antiquated. The central heating system, for example, uses wood as fuel – not out of nostalgia but because it is cheaper than either gasoline or gas in a country that has been under sanctions from mineral-rich Russia ever since the 2013 revolution that ousted Ukraine’s pro-Kremlin regime and triggered the fighting in the east.

The wooden logs that were used to build the walls of Anatevka’s synagogue and residential area are sealed with fireproof chemicals and high-tech insulation from Germany that help keep the place warm in winter.

Still, Anatevka isn’t for everyone. Noisy, dirty, inaccessible and devoid of even basic amenities such as a grocery shop and postal services, it is deemed unsuitable to their housing needs by even some of the refugees involved in the project.

“I’m a city person,” said Svetlana Koznitsova, a refugee from Lugansk who helps Azman run Anatevka but lives in a rented apartment in Kiev with her daughter. “I need to stay in the city and I will for as long as I can earn a salary.”

In one of the first-floor apartments in Anatevka, Meshulam Kolesnik, a web designer who was forced to leave Crimea after its annexation from Ukraine by Russia, is using Anatevka’s fast WiFi connection to improve the website he built to solicit new donations for the project.

“I’m not a carpenter like Sergey, but I build what I can for this place,” said Kolesnik, an observant Jew who lives here with his wife and has an office in the room of their two boys, 5-year-old Yitzhak and his little brother, Leib. Their colorful drawings are plastered all over the wooden interior of their room.

Kolesnik, 35, left his apartment in Simferopol last year because he had refused to trade in his Ukrainian passport for a Russian one. When his children were prevented from attending school, Kolesnik broke down and asked for the Russian nationality, but by then he was deemed ineligible because he wasn’t in the country when a majority of the population voted for annexation in a referendum that was deemed illegal by the international community.

When he moved to the Kiev region, Kolesnik left behind a successful business and a central apartment in sunny Crimea. But he says he is not bitter over the loss.

“We are once again living among equals in our own Jewish community and country,” he said. “And like this, I think we can face whatever lies ahead.”