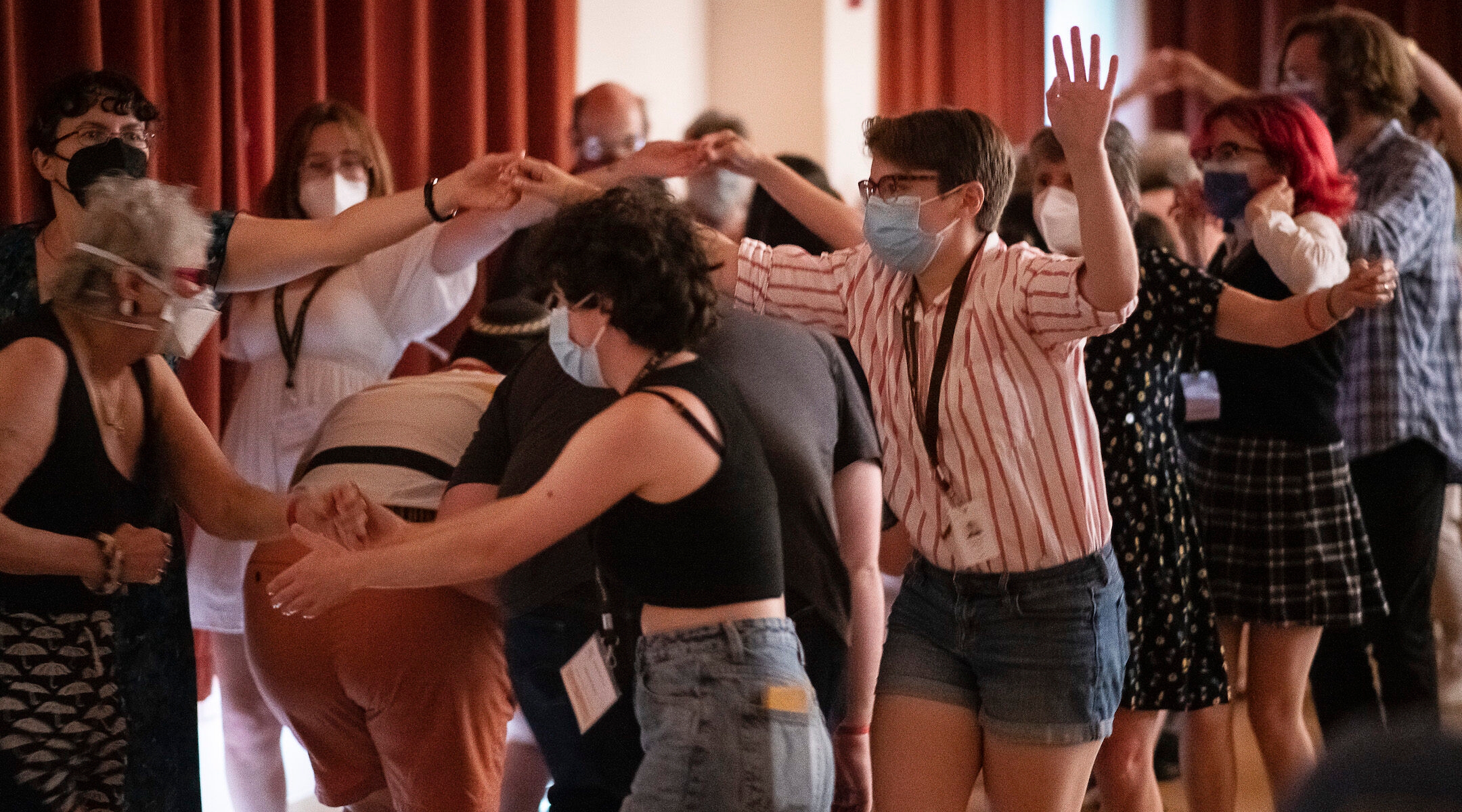 AMHERST, Massachusetts (JTA) — Josh Dolgin, the Canadian rapper and klezmer musician who performs as Socalled, was nearing the end of a raucous, crowd-pleasing set last Sunday when he paused to introduce a Yiddish song about a frog, “Di Frosh.”

“It’s a children’s song,” he explained. “But because it is a Jewish song it has a cruel twist.”

I was reminded of the Passover ditty “Had Gadya” — perhaps the only kids’ song that includes a visit from the Angel of Death — but I was also thinking of my own conflicted relationship with Yiddish culture. Dolgin is part of a postwar generation that wants to remember and resuscitate the explosive creativity of an Eastern European culture that produced music, poetry, literature — in sum, a Jewish civilization. But the unimaginable losses of the Holocaust hang over the project, and a farbissener — a sourpuss — like me finds it hard to forget the cruel twists of Jewish history and, well, enjoy.

Dolgin was performing at Yidstock, the festival of new Yiddish music held here at the Yiddish Book Center beginning in 2012. Some 400 people came to the center’s charming Yankee-shtetl campus over the four-day festival this year. The mood was celebratory, and why not: Returning in person after two years of pandemic, the (masked) audiences were primed for concerts, lectures and workshops remembering what Yiddish culture was, what it still is and what it could yet could be.

And, as it turns out, the pandemic was very good for Yiddish: Secular Yiddish institutions like the book center, YIVO and the Workers Circle clocked record attendance for their virtual Yiddish classes and lectures. Aaron Lansky, the Yiddish Book Center’s founder, noted wryly that a lecture on Yiddish poetry that might have attracted “a minyan” of 10 Jews in person drew more than 1,200 people on line.

I was able to feel this quickening pulse even in the half-day I spent at Yidstock. Dolgin’s acoustic performance whiplashed from hilarious to poignant, from Leonard Cohen to Mordecai Gebirtig, the composer killed during the liquidation of the Krakow ghetto. Mostly gray-haired audience members clapped along while 20-something students taking part in the book center’s summer programs danced in the aisles.

On the long line at the falafel truck, I chatted with Jake Krakovsky, an Atlanta-based writer and actor who recently performed the puppetry for a trilingual film based on a Yiddish children’s story (itself drawn from a recent collection reclaiming  Yiddish children’s literature). I also caught up with Aaron Bendich, not yet 30, who hosts an old-timey Jewish radio show and runs a record label, Borscht Beat, that promotes avant-garde Yiddish artists. 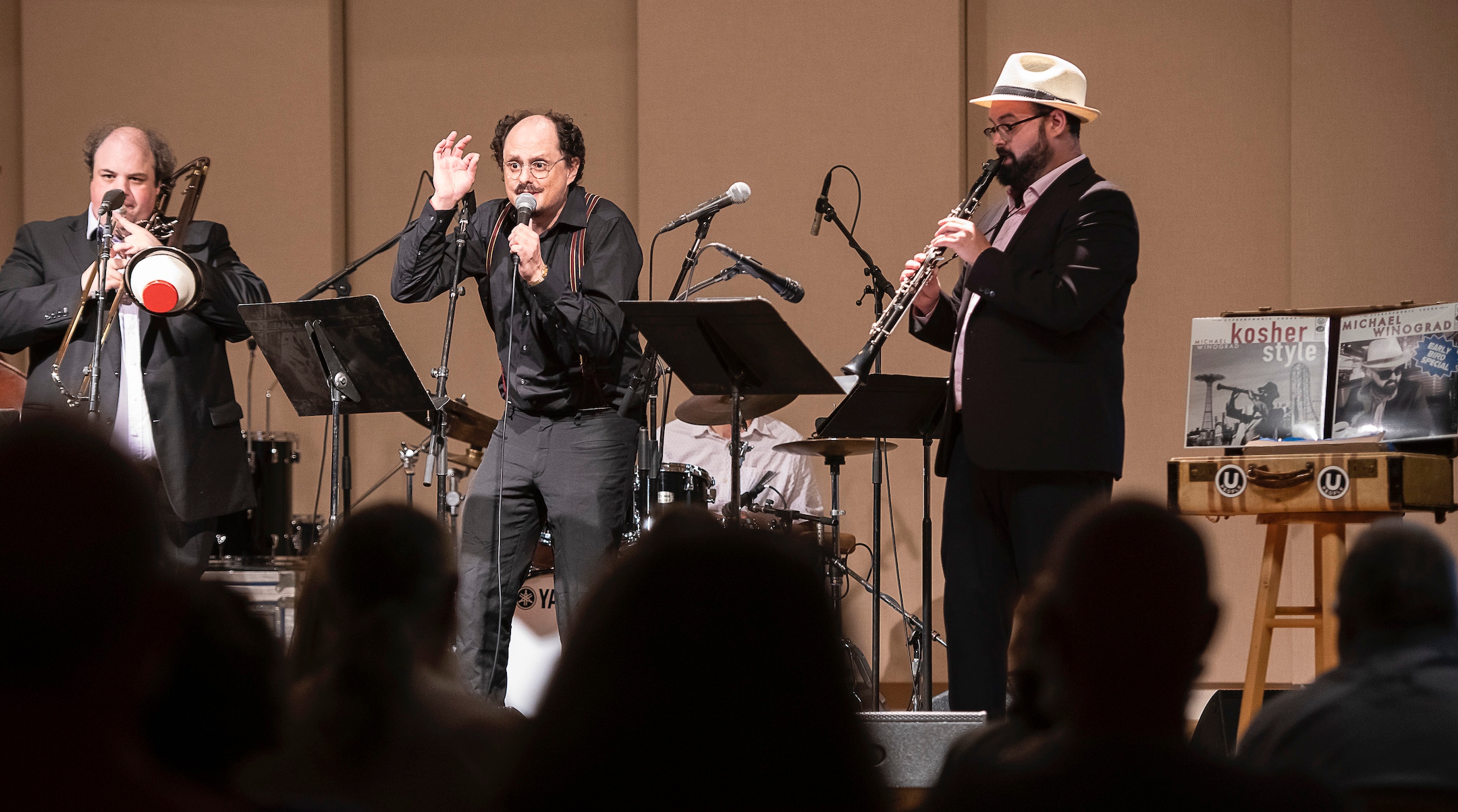 Music from its latest release was performed at Yidstock by the duo Tsvey Brider and members of the Bay Area klezmer trio Baymele, and showed the possibilities of reinvention by setting Yiddish poetry to spiky chamber music arrangements. Tsvey Brider singer Anthony Mordecai Zvi Russell is on the cutting edge of Yiddish reinvention, drawing on his Black and Jewish identities and opera background to make, as he once put it in an interview, “connections through time, space and history.”

Lisa Newman, the director of publishing and public programs at the Yiddish Book Center, said Yidstock is very much in keeping with the spirit of the center, which grew out of Lansky’s monumental effort to retrieve Yiddish books that, as their readers died off, were otherwise headed for the dumpster. Today those 1.5 million books are the nucleus of a $50 million enterprise that includes public programs, exhibits, publications and training — beginning and advanced — for the next generation of Yiddishists.

“The things that I’m watching our alumni do are fabulous,” she said. “They went on to academic careers. They’ve gone on to become translators. We have a publishing venture. We’ve got a translation fellowship. We’ve mentored almost 80 translation fellows so that there will be a new generation. And we’ve got actors who are on Broadway and Yiddish theater.”

Seth Rogovoy, artistic director of Yidstock, said that while this year’s 10th anniversary festival tended to look back on its “greatest hits,” the festival has always been about the future. “All the creative and innovative music that’s gone on, the best of it has been by people who have studied old stuff. And then they take it to all these different places: rock and funk and hip hop, all over the place,” he said. “We knew that we wanted to give a platform for creativity and people who are really not only perpetuating but moving the music forward.”

But is he ever preoccupied, as I am, by the mourning that is implied in the recovery and reinvention?

“There was always something inside of me that I didn’t know was there, and [Yiddish music] tied it all together,” said Rogovoy, whose mother’s father was a cantor. “So it’s celebratory more than mourning.”

“Mourning is not a word I attach” to the work of the students, translators and musicians, said Newman, when I asked her the same question. “We work hard to make sure that they can do this because we recognize that we lost a generation of Yiddish speakers.”

As I stepped out of the center into a brilliant New England summer afternoon, I thought of the session given by Eleanor Reissa, the best-known Yiddish singer and actress of this generation. She and Rogovoy discussed her new family memoir, “The Letters Project,” and although her parents suffered in Hitler’s Europe, she doesn’t refer to them as “survivors.” She prefers “fighters.”

And perhaps that’s the way to think about the future of Yiddish: not in mourning, but in creative defiance.